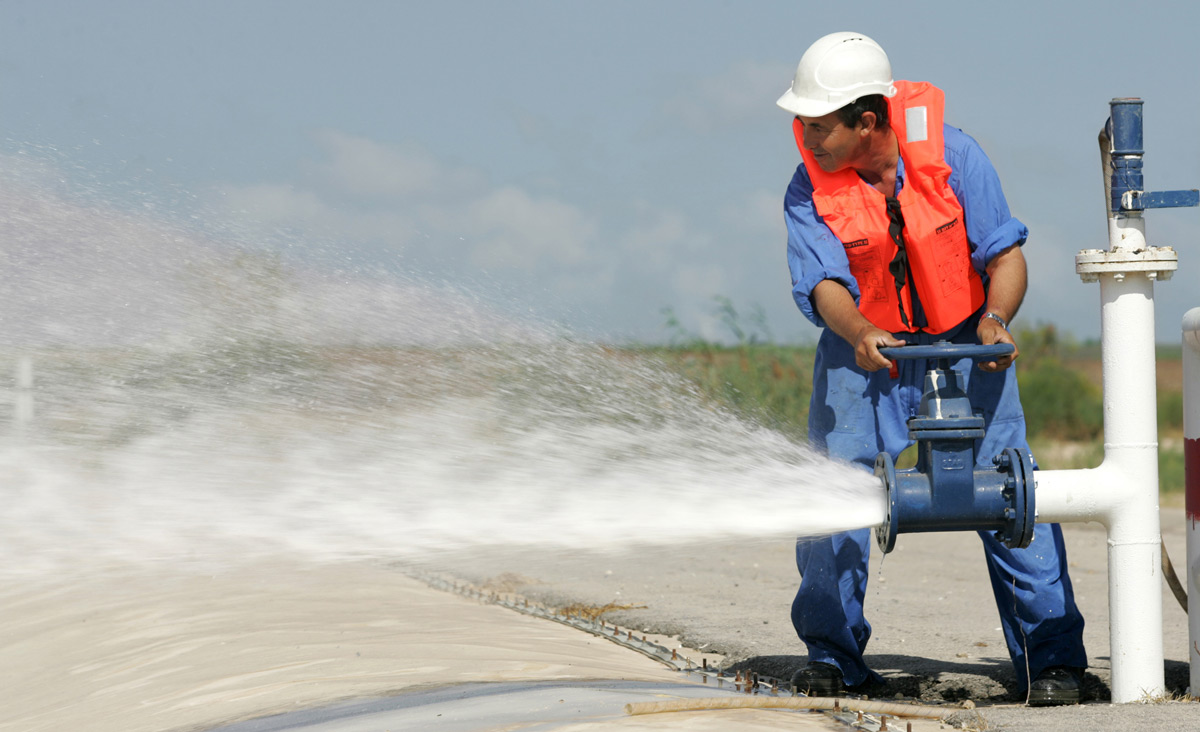 A worker at the Eshkol Water Filtration Plant in Northern Israel. Moshe Shai/FLASH90.

In November 1898, Theodor Herzl arranged a meeting with the German emperor, Wilhelm II, to obtain help in creating a Jewish state in the land of Israel. In their conversation, the Kaiser praised the work of the Zionist pioneers, telling Herzl that, above all else, “water and shade trees” would restore the land to its ancient glory. Four years later, Herzl had a lead character in his political tract-cum-novel Altneuland (“Old-New Land”) say of Jewish settlement in Palestine: “This country needs nothing but water and shade to have a great future.” Another character predicts that the water engineers of the Jewish homeland will be its heroes.

Utopian novels set the bar high, and Altneuland is nothing if not a utopian novel. Yet even before statehood, Zionists made remarkable strides in putting the land’s limited water resources to good use. They drained swamps, drilled wells, and developed irrigation systems. By the 1960s, Israel had developed a nationwide system of underground pipes to transport water from the relatively water-rich north to the Negev desert in the south. Israeli engineers also developed the system known as drip irrigation, which simultaneously conserves water and increases crop yields. Later, Israel would pioneer desalination technology. Combining scientific advances with efficient management, the Jewish state is now in no danger of running out of water. In fact, it provides large amounts from its own supplies to the West Bank, Gaza, and Jordan, while each year exporting billions of dollars’ worth of peppers, tomatoes, melons, and other water-intensive produce.

Herzl imagined something else, too, in Altneuland. Following the establishment of a Jewish national home, his protagonist announces, Jews will need to come to the aid of the suffering people of Africa, whose “problem, in all its horror, . . . only a Jew can fathom.” Israel’s founding generation took this admonition to heart. In 1958, Golda Meir, then Israel’s foreign minister, created a department whose mission was to help developing countries—particularly in Africa—overcome problems of water, irrigation, agriculture, education, and women’s status. The department, whose name translates loosely as loosely Center for International Cooperation, was known by the Hebrew acronym Mashav.

In its early years, the Mashav initiative was warmly embraced by African states as well as countries in Asia and South America. When she became Israel’s prime minister in 1969, Meir saw to it that the African program continued to get the support it needed. But then came the 1973 Yom Kippur war, in the aftermath of which, at the urging of the Arab League and the Organization of Islamic Cooperation, every sub-Saharan nation broke diplomatic relations with Israel and expelled the Mashav specialists. Traumatic as it was for Meir—she “had been messianic about her African program,” writes Yehuda Avner in The Prime Ministers—it was a much greater misfortune for the many Africans who had benefited from the now abruptly terminated programs.

In the 1980s, some African countries expressed interest in renewing ties. Ethiopia restored relations in 1989, and the rest of sub-Saharan Africa followed suit in 1993 with the signing of the first Oslo agreement. Today, Israel provides training in water management, irrigation, and other areas for specialists from more than 100 countries, 29 of them in Africa.

Moreover, Israeli water innovation for the developing world is no longer only the province of government. Consider, for example, Sivan Yaari: a diminutive thirty-something whose NGO utilizes solar power and Israeli technology to help bring clean water and electric power to people living in small and often remote African villages. Born in Israel, raised in France, and educated in the U.S., Yaari spent a summer working for the UN in isolated parts of Senegal, where water pumps were either broken or in disuse because villagers had no money for the fuel needed to run them. “They ended up digging bore holes a few kilometers away,” Yaari says, “to get filthy water they had to carry back to their villages.”

Her answer was Innovation: Africa (in shorthand, i:A), an organization that installs not only water pumps but similarly solar-powered electricity for light bulbs and vaccine refrigerators in medical clinics. It now runs water projects in seven African countries, and Yaari has plans for expansion. “It turns out,” she explains, that

there is a lot of underground water in Africa. You just have to know where to look for it. The bigger problem facing African water-assistance programs is that as soon as the aid professionals leave the villages, the systems begin to break down and the people are no better off than before.

To overcome this, Innovation: Africa has created a system that seems impervious to breakdown, vandalism, or theft—and that can be run remotely from Israel. The concept is deceptively simple. Once a source of potable underground water is located, a rented diesel-powered drill is brought in to reach it, a water pump is inserted into the shaft, properly sized solar panels are installed and connected, and water is drawn out and deposited into an adjacent water tower, from where gravity propels it to destinations all around the village. In addition, the waterlines are connected to a drip-irrigation system installed alongside the solar panels, enabling the villagers to plant seeds and harvest the produce.

Thousands of miles away, in Tel Aviv, i:A’s technology chief Meir Yaacoby has created a device to monitor and manage each African water system from the office. By means of whatever wireless service is available locally (Yaari: “They may not have shoes, but the adults have cell phones”), frequent messages keep Yaacoby updated with key information on, among other things, the quantity of water in the tower and any problems with the equipment. He also receives a constant Internet feed on local weather conditions. If it the outlook is for hotter weather than usual, or if a cloudy spell threatens to block solar rays, he can pump more water into the tower as a precaution; if rain is in the offing, he can stop and restart drip irrigation as needed by a particular crop at any given stage in its growing cycle. If the system itself develops a mechanical problem, he is apprised within minutes and can send detailed information for repairing it to a local engineer. Every part of the system can also be automated, making it infinitely scalable.

These drip-irrigation systems are having another, unexpected effect. Yaari cites a village in Uganda as a representative case study. Beyond providing more food for the village and relief from hunger, the system has enabled the villagers to sell their surplus at the market. “With the extra money, they’ve bought chickens and developed a poultry farm,” she reports. In addition, “Once you begin providing water, the children aren’t filling jerry cans with muddy water and they can wash. They also stay healthy; a large number of the children had been getting sick from drinking unclean water.” And there are still other benefits: “The children, especially the girls, had been walking two to three hours a day fetching water,” she says. “They would come back exhausted and filthy. Now, with water being pumped, they can go to school.”

If the animating humanitarian spirit of Mashav is alive and flourishing in 2015, bringing sustenance to destitute and water-deprived people around the world, Israel has also used its water knowhow to improve its commercial prospects and ameliorate its diplomatic isolation. To date, more than 150 countries have welcomed Israeli assistance or technology in addressing their water problems. One notable one is China.

Despite the country’s enormous natural resources, the PRC has long been plagued with water problems. Many farming regions are inefficient and wasteful when it comes to water usage; infrastructure is overburdened and superannuated, losing enormous amounts in leaks; sewage treatment is often inadequate; and lax enforcement of environmental laws has led to the severe deterioration of many sources of freshwater.

In the early 1980s, having previously rebuffed decades of diplomatic overtures from Israel, the PRC permitted teams of Israeli water engineers to come—secretly—to survey collective farms in the southern province of Guangxi. The engineers recommended the use of drip irrigation, as well as Israeli seeds that would be better suited to the soil and climate. The Chinese agreed, but demanded that any markings suggestive of Israeli origin be removed from the equipment and seed packaging. Three years later, again in secret, a team of Israeli hydrologists and geologists was invited to help develop an irrigation plan for the semiarid Wuwei district south of the Gobi desert. In time, creeping closer to recognition, the Chinese proposed that Israel send an irrigation and water-utilization expert to Beijing and in return they would send a tourism specialist to Israel.

From these highly guarded beginnings, formal diplomatic ties were finally established in 1992. When, twenty years later, Prime Minister Benjamin Netanyahu arrived in Beijing to meet with his counterpart Li Keqiang, water management was still high on the Chinese agenda, but now openly so. To Netanyahu’s proposal that, as a pilot project, an Israeli consortium be engaged to redo the entire water infrastructure of a small Chinese city, Li replied by designating one of his ministers to assist in picking the city. A little over a year later, a joint Israeli-Chinese committee announced the selection of Shouguang, a city of slightly more than one million people—small, by Chinese standards—as the test site.

“I don’t want to get ahead of ourselves,” said one senior Israeli official, “but if we perform well here, we will have the opportunity to help rebuild the water systems of cities all over China.” Whatever one’s view of Communist China’s domestic behavior or global ambitions, the potential economic benefits to Israel of such an enterprise are undeniable—to say nothing of the independent moral value of significantly improving the living conditions of millions of ordinary Chinese citizens.

This essay is adapted from Let There Be Water: Israel’s Solution for a Water-Starved World by Seth M. Siegel, to be published next week by Thomas Dunne Books/St. Martin’s Press. Copyright © 2015 by the author.