Why Are There No Great Israeli Superheroes?

The caped inventions of American Jewish cartoonists have thrilled countless people around the world. Israeli Jews have never produced anything comparable. Why? 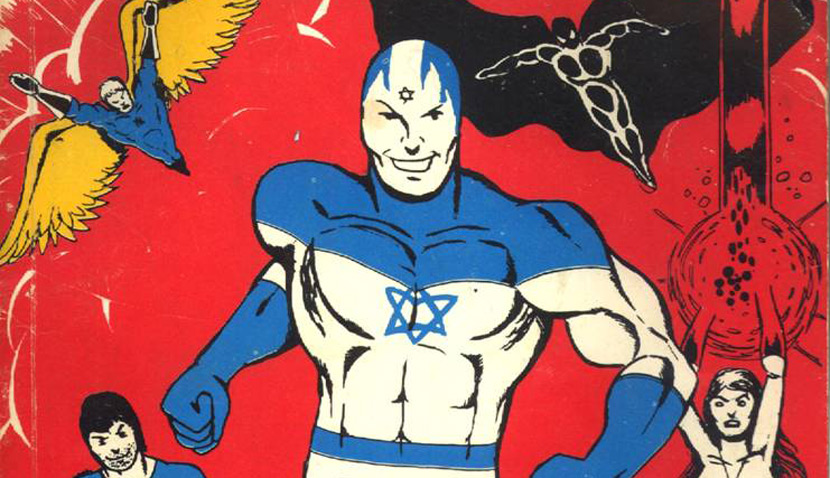 “Sabra-Man,” an Israeli superhero invented in 1978 by the illustrator Uri Fink.

Age of Ultron, this year’s Avengers film sequel, has generated $1.4 billion worldwide at the box office so far, a number likely to be matched or exceeded by Dawn of Justice, next year’s eagerly anticipated Batman vs. Superman film. Not an unimpressive achievement for characters originally created by the children of poor Jewish immigrants.

Yet while the caped inventions of (mainly) American Jewish cartoonists have excited the imaginations of people around the world, Israeli Jews have never produced anything comparable. The Hebrew Superhero (original Hebrew title Hagibor-ha’al ha-ivri), a new documentary film by the directors Shaul Betser and Asaf Galay (whose previous film was reviewed in Mosaic by Ruth Wisse), asks why.

It’s the wrong question to ask, as I’ll explain in a moment, but this shouldn’t distract from what is otherwise an informative and charming film. Using interviews with comic-book creators and brief animated sequences that bring the characters to life, the film searches, in vain, for an Israeli equivalent of Superman and Spiderman. Along the way, it tells the story of Israeli comics from the period of the British Mandate to the present, uncovering a number of interesting tidbits (like the fact that the term sabra to denote a native-born Israeli took shape in children’s comics produced in the 1930s by the illustrator Aryeh Navon and the poet Leah Goldberg). And The Hebrew Superhero does propose a few candidates, if not terribly impressive ones, to justify its title.

Thus, in the 1950s, a kibbutznik character named Gidi Gezer gained Popeye-like superpowers from eating carrots—yet, as the series continued, in good socialist fashion Gidi became less a superman than a virtuous everyman. No less wimpy were Yoav Ben-Ḥalav, introduced in 1960, who gained his superpowers from drinking milk, and the tea-powered hero of a strip underwritten by the Wissotzky Tea company.

Even the first truly American-style Israeli superheroes, introduced in the 1970s and 80s, were failures. One such dud was “Sabra-Man,” introduced in 1978 by the fifteen-year-old Uri Fink (later to become Israel’s most popular and prolific comics illustrator). He was followed by Uri-On, a Superman clone with a menorah on his chest, launched in 1987 by the Detroit-born Michael Netzer, a highly regarded illustrator for DC titles (before he moved to the West Bank). Uri-On, too, was forgettable and quickly discarded.

What’s the problem? Are Israelis too hard-bitten and cynical to create their own supermen and wonderwomen, as the writer Etgar Keret suggests in Betser and Galay’s film? Does luck, or geography, play a part? That’s the theory of Eli Eshed, a scholar and blogger with an encyclopedic knowledge of Israeli pop culture who served as a consultant on the film. In his pathbreaking 2002 study of Hebrew popular fiction From Tarzan to Zbeng (in Hebrew), Eshed muses:

“[I]f the parents of Jerry Siegel and Joe Schuster, the creators of Superman, or of Jacob Kurtzberg (Jack Kirby) and Stanley Lieber (Stan Lee), creators of Marvel Comics characters, had decided to immigrate to Palestine rather than the United States, . . . who knows? Perhaps Superman would have been introduced as a fighter in the Haganah, and Spiderman as a frustrated kibbutznik.”

It’s an amusing thought, but unlikely. Without superheroes, it’s certainly possible to have a lively comic-book culture—consider France and Belgium with their Asterix and Tintin. But the fact is that, like jazz and baseball, superheroes themselves are a uniquely American, or American Jewish, confection. The right question is therefore not “Why are there no Israeli superheroes?” but rather “Why are superheroes so quintessentially American a phenomenon?” That would be a different film, and a topic for a different occasion.

In any case, Israel’s pre- and early-state period was less than fertile ground for the creation of caped and chevroned crime fighters. Zionist culture had something of a puritanical streak about it, reinforced by the didactic tenor of Israeli socialism as well as a very Jewish respect for canons of high culture, whether secular or religious. While westerns, detective thrillers, science fiction, and other popular genres existed in Hebrew since the early 20th century—Eshed enthusiastically sketches their history—they were viewed with suspicion by the guardians of Israeli culture.

Consider the example of Pinḥas Sadeh. One of Israel’s major novelists and poets, Sadeh was also a prolific contributor to Hebrew comics, collaborating on works like the Dan Golan spy serial and the science-fiction saga Meliselda, or The Coming of the Gods. He did so, however, under a pseudonym.

Today, of course, the mass-culture stigma no longer exists. Yet rather than produce Batman- or Spiderman-style superheroes, Israeli comic creators, like many of their American counterparts, prefer to deconstruct the conventions of the genre. In 2003, for instance, Eshed and Fink collaborated on The Golem: The Story of an Israeli Comic Book (in Hebrew), a cleverly executed pseudo-history of Judaism’s greatest superhero. Presented as an authentic academic study of a supposed but actually non-existent publication, Eshed recounts its history from its origins in the 1930s to the present. What he’s really produced is a history of Israel’s national psyche, with Fink’s accompanying illustrations mimicking perfectly the different styles of the period’s popular Hebrew illustrated fiction.

In sum, Israelis, like the rest of the world, will flock to see the latest American superhero film exports like Age of Ultron or the forthcoming Dawn of Justice. The pen-and-ink skies in Israeli comic books, however, are more likely to contain birds, planes, and Qassam rockets than Hebrew superheroes.

Why Are There No Great Israeli Superheroes?