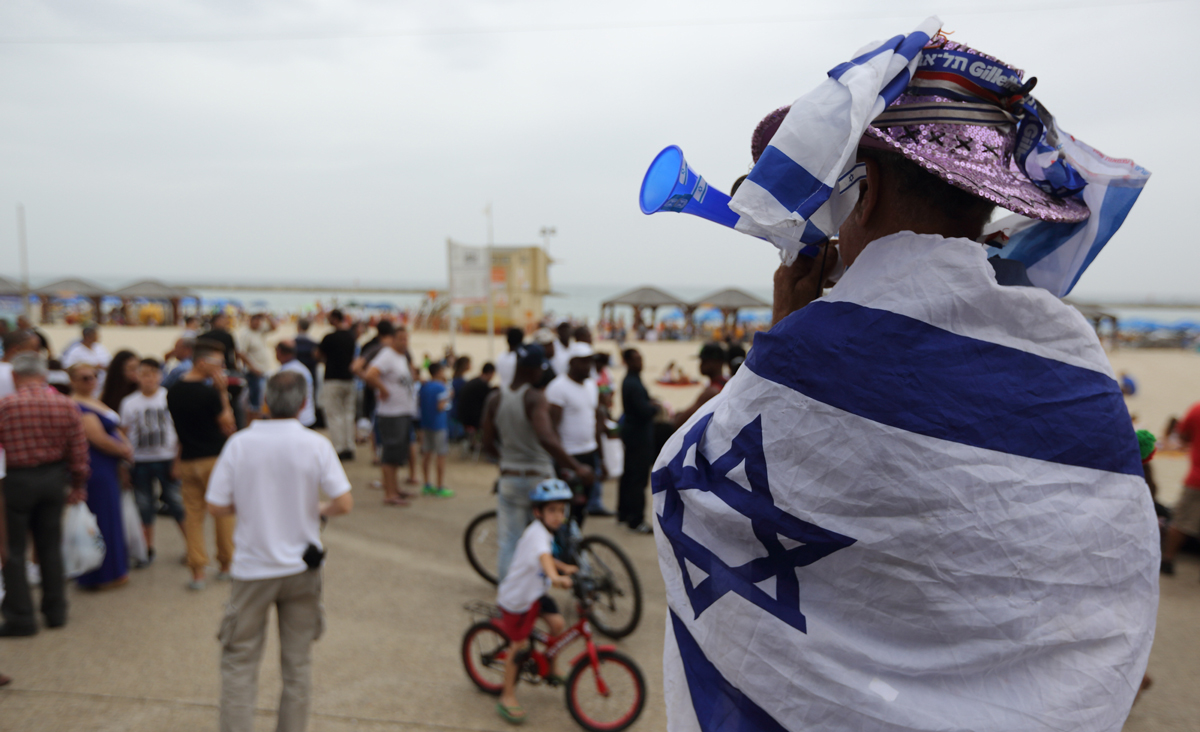 A man wrapped in an Israeli flag walks on the beach in Tel Aviv during celebrations on Israel’s 66th Independence Day, May 6, 2014. Yaakov Naumi/Flash 90.

One of the most persistent controversies within Orthodox Judaism today concerns the question of whether to say the prayer known as Hallel on Yom Ha-Atsma’ut, Israel’s Independence Day (which this year falls tomorrow, May 12)—and if so, whether the prayer should begin with the blessing that traditionally accompanies it. This dispute is generally understood as being over whether one opposes or embraces Zionism, but I’d like to suggest that it’s about much more than that.

First, a bit about the prayer itself.

In the Talmud, the term Hallel—which simply means “praise!” and is the root of the word Hallelujah—can refer to any of three prayers, all of which are biblical texts. First there is the everyday Hallel, sung by the Levites in the Temple and found in 1 Chronicles 16. It is preserved in the opening section of the morning prayer. Then there is the “Great Hallel,” Psalm 136, which, the Talmud tells us, the Levites sang on very special occasions such as the inauguration of Solomon’s Temple. And finally there is the “Egyptian Hallel,” so called because it includes the line “when Israel left Egypt” and was instituted by the Great Assembly or, depending on whom you believe, earlier by the prophet Samuel and King David, for the people “to say when they are delivered” (Tractate P’saḥim). Consisting of Psalms 113-118, it is today simply referred to as Hallel and is the subject of the Independence Day controversy.

The Egyptian Hallel is in fact recited on a number of occasions throughout the year. In putting forth his argument for saying it on Yom Ha-Atsma’ut, Dov Rappel—a religious-Zionist scholar who played a key role in introducing the practice—divides these occasions into three categories: days when Hallel is said out of rejoicing, days when it is said to commemorate historic deliverance, and days when it is said by mere custom. It is the question of deliverance that is the nub of the matter, and at the heart of the Independence Day dispute.

Originally, it seems, Hallel was said only on days of rejoicing, namely, the three pilgrimage festivals (Passover, Shavuot, and Sukkot) and Sh’mini Atzeret. As for the Hallel of deliverance, according to Rappel, that was said in remembrance of a unique occasion of national salvation such as the parting of the Red Sea., the victory of the Maccabees, and so forth. Thus it is recited on Hanukkah and can, in theory, mark other instances of collective salvation. Finally, the customary Hallel was instituted not by the sages but by the people, who said an abridged version of Hallel on the last six days of Passover and on Rosh Ḥodesh (the new moon). Eventually, the rabbis accepted this practice and codified it into the liturgy.

Now Hallel comprises more than just the psalms themselves. It begins with the aforementioned blessing—“Blessed are You, Lord our God, King of the world, who made us holy with His commandments and commanded us to recite Hallel”—and ends with another blessing—“Blessed are You, Lord, King extolled with songs.” From a halakhic perspective, these blessings significantly up the ante of the Yom Ha-Atsma’ut question: pronouncing a blessing in vain is considered a grave sin. Without them, you could argue that there’s nothing to be lost by saying Hallel on that day: if the creation of the state of Israel is a unique moment of national deliverance that merits rendering special thanksgiving to the Lord, then it’s a good thing to say it; if it’s something else, then you’ve still only said some psalms—no harm done. Add the blessings, however, and their formal invocation of God’s holy name, and if Hallel on this day is somehow unnecessary or inappropriate, you’ve just violated the third commandment against taking the Lord’s name in vain.

Putting Hallel in the Yom Ha-Atsma’ut liturgy is thus a bold step. But, as Rappel notes, the people opted to say Hallel on Rosh Ḥodesh, with a blessing and without rabbinic approval, and doing so is now wholly accepted. Yom Ha-Atsma’ut should therefore fall into the same customary category, and by that argument the blessings would be rendered not such a problem after all. But in placing the Independence Day Hallel in the customary category, Rappel is being disingenuous. For this isn’t a Hallel of custom, but one of deliverance—as Rappel himself more or less admits in an interview I’ll return to very soon. It all comes down to what you think the state of Israel is, and to the nature of deliverance.

Let’s turn to the text:

First and foremost, as this opening passage suggests, Hallel is a song of slaves. Slaves of whom? Slaves of the Lord—that is to say: slaves who have been delivered by the Lord.

Back in 1968, Dov Rappel and his colleagues on Kibbutz Yavneh were examining the prayers for Independence Day recommended by the Israeli chief rabbinate and found them inadequate. So they revised them, eventually publishing their own prayer service for that day, which has subsequently been adopted by the religious Zionist public in Israel and by many Diaspora congregations as well. In an interview with the researcher Aaron Arend, Rappel explains what prompted their rethinking:

It seemed to us, and it turned out we were correct, that the chief rabbinate saw the state of Israel more or less as [Theodor] Herzl saw it, i.e., as a safe haven. There are refugees, there are Jews in distress, and there’s a state of Israel to save the Jews from distress. The state of Israel has no spiritual content. And they acted accordingly: firstly, they didn’t introduce any new prayers, [except for the one] for the welfare of the state of Israel, which was introduced into the Sabbath liturgy—but there’s no prayer for Independence Day.

This is where the question of deliverance emerges. If you sit in a café across the street from the Israeli Opera in Tel Aviv, a city named after the fictional town in Herzl’s utopian novel Altneuland, you will be enjoying the fulfilment of Herzl’s prophecy. Being a slave of the Lord is another matter entirely.

When Israel came out of Egypt
The house of Jacob from a foreign people,
Judah became His preserve, Israel His province.
The sea saw and fled
The Jordan turned in retreat
The mountains danced like deer,
The hills like heads of sheep.
What ails you, Sea, that you flee?
You Jordan that you turn back?
You mountains that you dance like deer?
You hills like heads of sheep?
From before the Master tremble, O earth
From before the God of Jacob
Who turns the rock into a water pool,
Flint into His water spring.

In the same interview, Rappel goes on to outline his alternative conception:

We tended in the direction of awareness that the state of Israel is, as they said in the [Sabbath] prayer [for its welfare], “the first flowering of our redemption.” Although it has no actual content of redemption, it has the potential of redemption. I wouldn’t even say a chance of successful redemption, but the possibility of redemption.

I find much to admire in the modesty of this last phrase. Some may think that even it amounts to blatant heresy: an attempt to ascribe divine prerogative to the actions of a few irreligious, perhaps anti-religious, gun-runners who were successful in battle. Those within the ḥaredi world who hold that view are actually among Israel’s fastest-growing population. On the other hand, Rappel’s modesty is a far cry from the theology of the more messianically-minded Gush Emunim movement, whose investment in the divinity of the state of Israel has historically so titillated Western journalists. Rappel’s attitude certainly appears sufficiently positive to put a 20th-century holiday, created by a secular Jewish democracy, on a par with Hanukkah.

The final exchange in the interview is the most evocative. Arend remarks: “Independence Day nowadays has an odd character; [most secular Israelis] have a barbecue and empty it of any religious significance.” To which Rappel responds: “The fate of Independence Day is that of the International Convention Center in Jerusalem, a hollow monument to Zionism. We’ll go to the synagogues; they’re our convention center.”

Some of my American friends tell me that there’s a similar complaint about Independence Day in the U.S.: people have a barbecue and enjoy a day off from work and drink beer and don’t think much about the significance of independence from the British monarchy or indeed freedom. In other words, their complaint is that July 4 is shorn of its secular significance. To these American friends, I think Rappel might have said that civic rituals inevitably become “hollow monuments” unless they are also invested with religious meaning. Saying Hallel on Yom Ha-Atsma’ut isn’t just about Orthodox Judaism—by nature so slow to change—adopting Zionism; it’s also not just about presenting an alternative to Herzl’s secular utopianism. It’s about instilling some durable spiritual content into Zionism itself, durable spiritual content being the domain of prayer rather than political action, which flares in a moment and is gone.

Jews who celebrate Yom Ha-Atsma’ut outside of Israel and say Hallel with or without a blessing are, I suspect, compelled by Rappel’s view—even if they are not aware of his actual arguments—and by an awareness that whether they are slaves of the Lord or not, the victory commemorated on that day was not merely military. The continued existence of the state of Israel does not offer merely a physical refuge; wherever you may be on the face of the earth, it offers a possibility of something different. If you say Hallel in a coffee shop opposite the Tel Aviv opera perhaps you should say it without a blessing; but if you say it in a synagogue surely you should bless.

Lord our God all Your creations will extol You
And Your followers, the righteous who do Your will,
And all Your people the house of Israel,
In song will give You thanks and bless
And praise and glorify, hold high and admire
And sanctify and crown Your name our King.
For to You it is good to give thanks
And to Your name it is fit to sing
From time immemorial and for all time
You are God,
Blessed are You, Lord, King extolled with songs.