How Israeli Backpackers Imported an Element of Spanish into Hebrew

What nahagos, the casual term for “driver,” tells us. 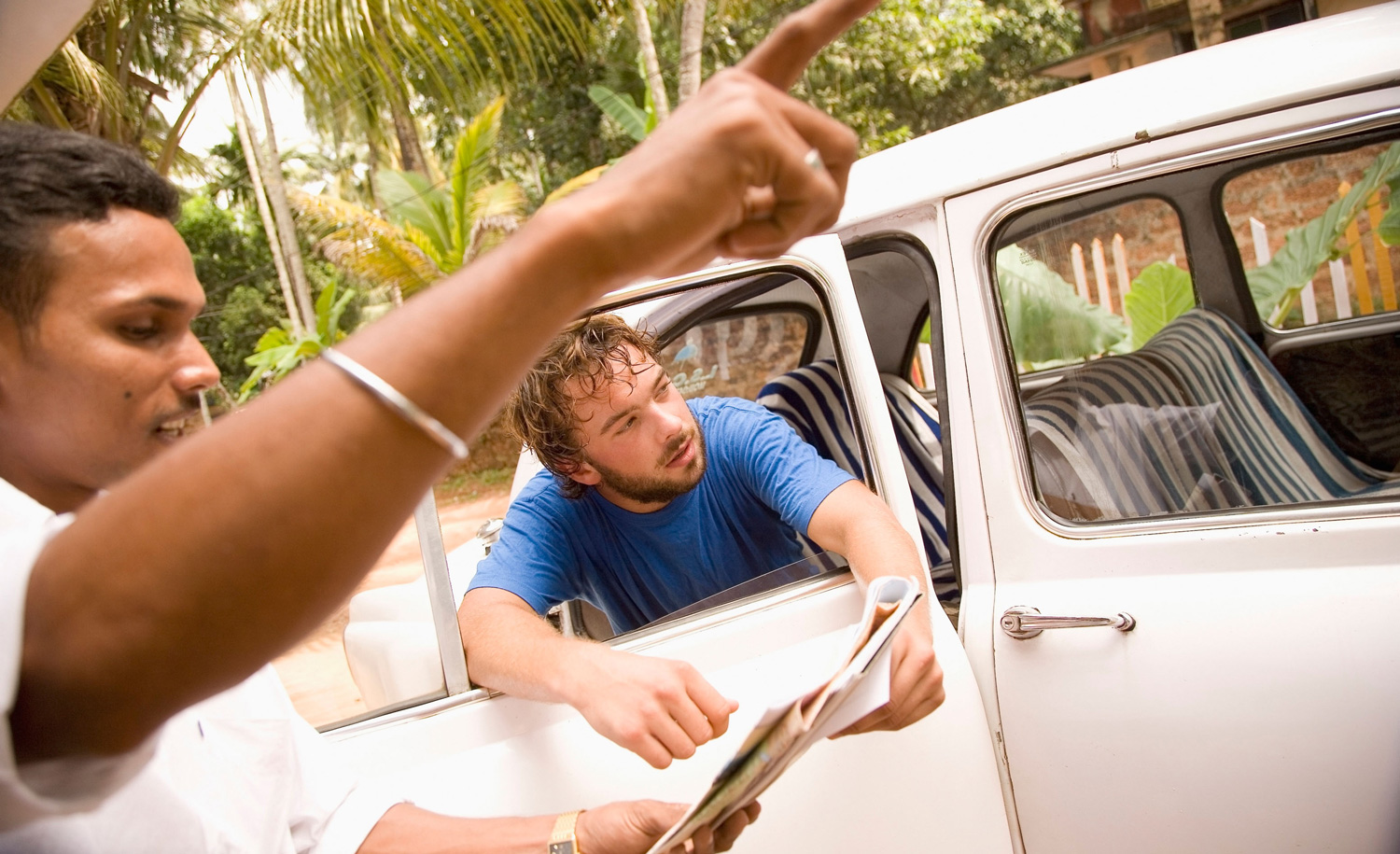 Rabbi Carl Perkins of Temple Aliyah in Needham, Massachusetts has sent me the photograph reproduced below (click to enlarge), together with a note:

I received this ad during the Israeli election campaign of 2013 and found the use of the term nahagos intriguing. Can you say something about it in one of your future columns? 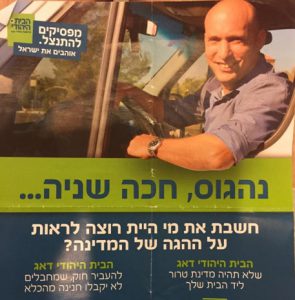 For many of you, the ad Rabbi Perkins asks about needs some preliminary elucidation. In it we see Naftali Bennett, the leader of the largely Modern Orthodox and strongly nationalistic Ha-Bayit Ha-Yehudi or Jewish Home party, smiling at us while sitting at the wheel of a vehicle. In the upper left-hand corner, as though pasted on the windshield, are the party’s logo and the rhyming Hebrew slogan Mafsikim l’hitnatsel, ohavim et Yisra’el, “No more apologizing, we love Israel.” Beneath Bennett’s left forearm, which rests on the open window frame, are these words in black letters on a green background: Nahagos, ḥakey shniyah, “Hey, driver, wait a second.” Beneath that is the white-on-black question, “Have you thought about whom you would like to see behind the wheel of this country?”

What puzzled Rabbi Perkins was the fact that the Hebrew word for “driver” is nahag, not nahagos, whose final –os corresponds to no Hebrew suffix or grammatical ending. Where does it come from and what is it doing there?

Most Israelis, and certainly all younger ones who have been in the army, could tell you part of the answer. Nahagos is army slang, generally used as a way of addressing a driver whose name one doesn’t know. Suppose, for example, that you are a soldier on an army base stopping a military vehicle to ask for directions how to get somewhere. You could pose the question without using the word “driver” at all. You could also begin it politely with something like “Sliḥah, nahag, . . . ,” “Excuse me, driver. . . . ” If you wanted to sound chummy and breezy, however, you might omit the “Excuse me,” and begin with Nahagos, “Hey, driver!” Of course, you would first make sure you weren’t addressing an officer; you’d be more likely—especially if you were speaking from a distance and couldn’t make out the person’s rank—to use the term with the driver of a truck or a personnel carrier than of a jeep.

The Jewish Home election ad was an effective one because it played on the well-known fact that Bennett had himself served as an army combat officer: it created a sense of solidarity between him and the voter while evoking the comradeship of the army experience, which for most Israelis is one of the most important of their lives. “I’ve been a soldier together with you,” was its implicit message. “Vote for someone who can be trusted to lead you because he is one of you.”

But where does nahagos come from? Why its –os ending?

My immediate reaction was that it might have something to do with Spanish, in which –os, the plural ending of masculine nouns and adjectives, is a common sound. (Think, for instance, of buenos amigos, “good friends,” tiempos modernos, “modern times,” etc.) Indeed, the Spanish –os has been turned into an Israeli television gag by the satirical production The Jews Are Coming, now in its second year on Israel’s Channel 1. In one of its funnier skits, Eliezer Ben-Yehudah, the celebrated pioneer of the spoken Hebrew revival in Palestine, pays a call on L.L. Zamenhof, the inventor of Esperanto, to inquire about propagating Hebrew as a spoken language. Zamenhof, who can’t imagine why anyone would want to speak Hebrew when they could be speaking Esperanto instead, answers fluently in his invented tongue—which, rather hilariously, is nothing but Hebrew with –os tacked on to nearly every word. “Kol ha-olamos kvaros medaberos otos,” “The whole world already speaks it,” he boasts to the nonplussed Ben-Yehudah, who had been hoping for a more sympathetic reception.

And yet if the –os of nahagos is from Spanish, how did it get into Hebrew? The most obvious way for it to have done so would have been via Ladino, the Judeo-Spanish spoken well into the 20th century by the Jews of Greece, Turkey, and the Balkans, many of whom settled in Israel. Not only, however, has a Ladino-speaking friend of mine assured me that nahag, with a plural of nahagos, is not a Hebrew word found in Ladino, but the word itself seems to have originated relatively recently, long after Ladino ceased to be widely heard in Israel. It isn’t found in older Hebrew slang dictionaries, and Ruvik Rosenthal’s comprehensive 2005 Dictionary of Israeli Slang gives 2003 as its earliest locatable appearance in print. Even if its spoken use goes back a decade or two before that, Ladino is unlikely to have been its source.

What was? I came across the probable answer in a comment on a Hebrew blog post. Nahagos, according to the writer, originated with Israeli mochileros (backpackers, from Spanish mochila, backpack) in South America. South America is one of the main destinations for young Israelis observing the national custom of a long hiking trip abroad after their years of compulsory army service. Presumably, groups of them, in a joking reaction to the Spanish –os, began referring at some point to their taxi or bus driver as their nahagos. Back in Israel and doing their annual reserve duty, they introduced the word into the army, where it caught on.

It makes sense. And nahagos has also infiltrated Israeli civilian life, where it has a tone, as the same commenter pointed out, that is

both pally and patronizing. It has the sense of “I’m paying you a lot for this trip, so be a good fellow and do what I tell you.” For instance: “Nahagos, drive a little faster. Didn’t you have breakfast this morning?” Or: “Nahagos, I know we’re almost in Jerusalem, but you’ll have to turn around, because I forgot my laptop in Tel Aviv.”

As for Bennett, he did well in the 2013 elections (although somewhat less well in subsequent ones held in 2015) and is at present, as a coalition partner in the Netanyahu government, Israel’s minister of education. He still isn’t behind the wheel, but he’s young and has lots of driving ahead of him.

How Israeli Backpackers Imported an Element of Spanish into Hebrew