Ike vs. Obama in the Middle East

One of them learned from his mistakes, re-examined his fundamental assumptions, and changed course as necessary. 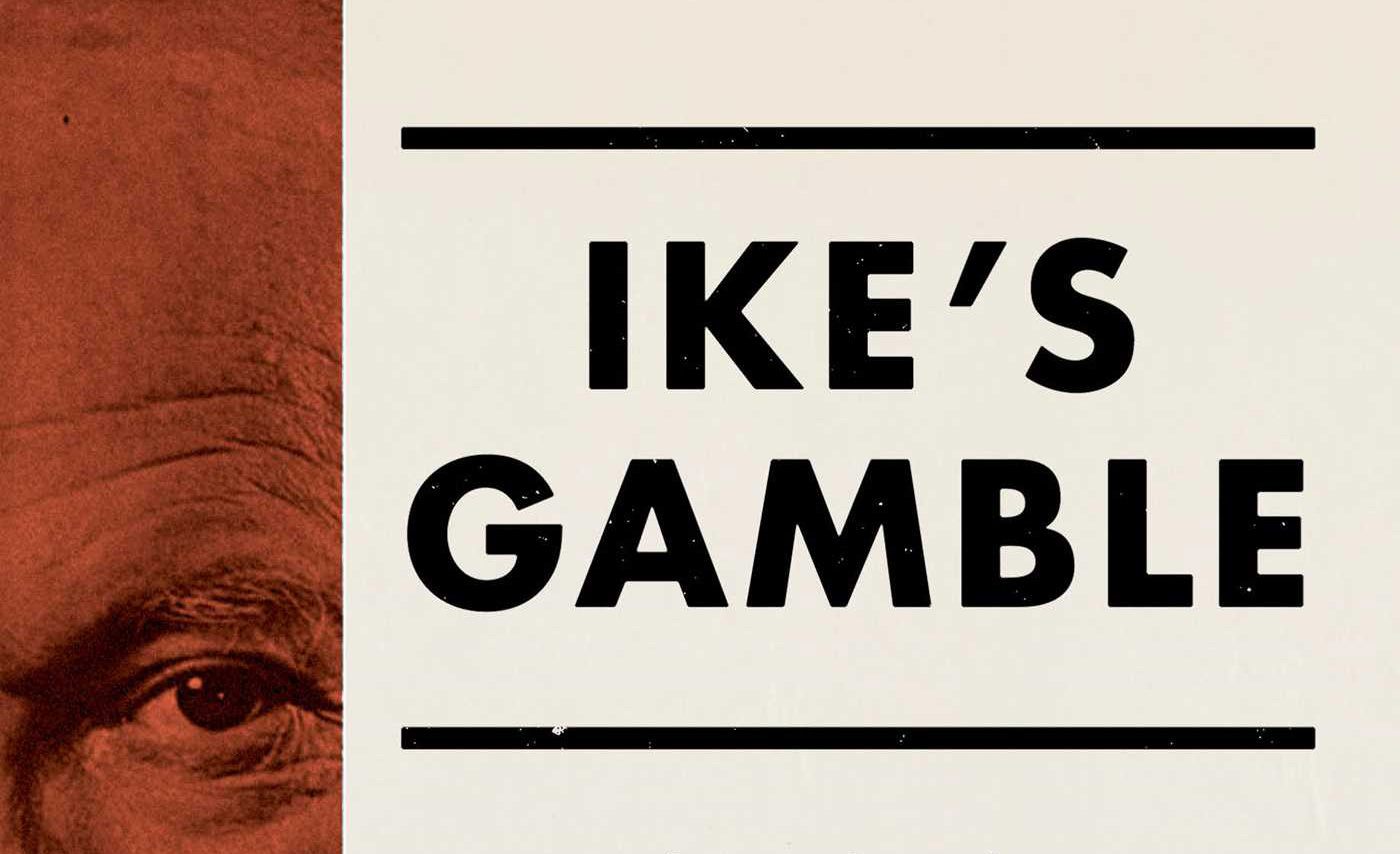 From the cover of Ike’s Gamble, by Michael Doran. Simon & Schuster.

When Dwight D. Eisenhower became president of the United States in 1953, Great Britain was facing a crisis in the Arab Middle East. Although it had formally given up much of its empire (as well as its mandate in Palestine), Britain still exercised a great deal of influence through outright protectorates like the Persian Gulf sheikhdoms, friendly monarchies like Jordan and Iraq, and a network of military bases. But the linchpin of the system was Egypt, where the United Kingdom had 80,000 troops stationed along the Suez Canal—and Egypt was in danger. King Faruq, the obliging ruler over a British protectorate, had recently been overthrown, and the nationalist military men who had seized power, known as the Free Officers, were publicly demanding that London evacuate its forces from the country.

What stance would the new American president adopt toward the crisis in Egypt and toward the rest of the Middle East? In general, Eisenhower believed that America’s task was to be an honest broker between the British and the new Arab nationalists seeking redress from their former overlords. In no way idiosyncratic, Ike’s view of the American role in the region was by far the dominant perspective in Washington—a perspective reinforced by the foreign-policy elite’s stance toward Israel, which at best could be described as arm’s-length when not positively adverse.

Indeed, the two postures went together. Like Britain, Israel was a country inextricably linked to the United States but regarded by the Arabs with deep hostility. Since the goal of American policy was to acquire as much Arab goodwill as possible by demonstrating, in the terminology of the administration, “impartiality,” it was necessary to avoid any stigma of association with the Jewish state. This chilly attitude expressed itself, among other ways, in the flowering under the Eisenhower administration of the American Friends of the Middle East (AFME), a CIA front organization one of whose aims was to counteract the support for Zionism in domestic American politics.

It is impossible to exaggerate the impact that the image of America as an honest broker had on Eisenhower’s thought. The notion that the top priority of the United States was to win the friendship and gain the confidence of Arab nationalists by helping them extract concessions from Britain and Israel not only preempted other views but shaped policy proposals up and down the line. So pervasive was the idea that Eisenhower and his colleagues regarded it not as an intellectual construct but as a description of reality itself. It was not open to debate.

When it came in particular to the new regime in Egypt, the United States entertained very large hopes indeed. Although outwardly the reins of power in Cairo were held by General Muhammad Naguib, the country’s first president, it soon emerged that the true leader of the Free Officers was Colonel Gamal Abdel Nasser, who also cut a charismatic figure in the wider Arab world. In keeping with the honest-broker approach, Eisenhower identified Nasser as nothing less than a strategic partner: the only leader capable of ushering in a new era of cooperation between all of the Arabs and the West.

With this in mind, Eisenhower helped Nasser oust the British from Egypt. While doing so, he also allowed the CIA to equip the Egyptian strongman with a powerful, state-of-the-art broadcasting system, in the expectation that Nasser would use this equipment to help unify the Arabs behind the United States in its cold-war struggle with the Soviet Union. But this was a gigantic miscalculation. Soon the broadcasting system was beaming Nasser’s radical pan-Arab ideology, in all of its anti-Western and anti-Zionist glory, into every Arab household in the Middle East. In the end, gravitating not toward Washington but toward Moscow, Nasser would work assiduously to undermine the Western position in the Middle East.

What went wrong? Accounts differ on the precise cause of Nasser’s alienation. In some versions, a ham-fisted America subverts itself. In others, a belligerent Israel drives Egypt into the arms of the Soviet Union. In still others, both factors conspire together. But a major theme runs through much of the vast literature on the subject. Eisenhower and his secretary of state, John Foster Dulles, came into office—so the tale goes—with good intentions and with the right ideas, but in the course of events they willy-nilly adopted the old attitudes and habits of empire. Against their better instincts, they alienated Nasser and, along with him, much of the rest of the Arab world; by the time they realized their mistake, it was already too late.

The real story is, however, quite different. Imbued with their honest-broker mentality, Eisenhower and Dulles subordinated all other issues to the effort to settle the Anglo-Egyptian and Arab-Israeli conflicts. This, for them, would eliminate the obstacles to an American strategic partnership with the Arabs. In sedulously cleaving to this approach, they turned a blind eye to the fierce, ongoing conflicts among the regional Muslim powers themselves and especially to Egypt’s hegemonic aspirations. Exploiting the American fixation on peacemaking, Nasser adroitly deflected Washington’s attention from his own revolutionary, pan-Arab program, which, even as it screamed about Zionism and imperialism, sought to eliminate Arab rivals to his regional leadership.

What finally brought home to Eisenhower the deficiencies of his honest-broker approach was the long-term impact of the Suez Crisis.

The crisis came to a head in late 1956 when Britain, France, and Israel jointly attacked Egypt in an effort to regain Western control of the Suez Canal, which Nasser had nationalized. Taking a strong position against the three nations, Eisenhower went so far, in the United Nations, as to side with the Soviet Union against America’s own allies. By publicly demonstrating his firm opposition to the European and Israeli action, the president expected to reap a large strategic payoff for the United States in the form of widespread Arab goodwill. Instead, Washington handed Nasser yet another political victory—the greatest of his career—thereby helping to transform the Egyptian leader into a pan-Arab hero of epic proportions.

The consequences for the United States would be profound. When Eisenhower first took office in 1953, the Arab world was still tied to the West, thanks in no small measure to the continued influence of British and French imperialism. The Soviet Union had been successfully locked out of the region for almost three decades, and the American goal was to keep it out. By the end of his second term, however, a wave of revolution had swept the region. It did its greatest damage in Iraq, where revolutionaries, modeling themselves on Nasser, toppled the pro-British Hashemite monarchy. The new leaders quickly looked to Moscow for support, and the Middle East became a major arena of cold-war competition.

Watching these results unfold in the aftermath of the Suez Crisis, Eisenhower would reverse course, discarding, once and for all, his fundamental assumptions about the Middle East. No longer did he believe, as during the Suez Crisis, that helping the Arabs balance the power of the Israelis and the Europeans was the key to a successful regional strategy. In fact, he dispensed altogether with the notion of any one-size-fits-all policy toward the Arabs. The key challenge before the United States, he now realized, was to manage inter-Arab conflict by helping one network of Arab states balance the power of a rival network. In later life, he expressed regret for having treated his allies so harshly at Suez, and even came to see Israel as a strategic asset.

“History does not repeat itself, but it often rhymes,” Mark Twain supposedly said. In 20th-century Middle Eastern history, no period rhymes more powerfully with our present moment than the era of the Eisenhower presidency. Today, as then, we are witnessing the fall of a discredited old order and the rise of something new. Transnational Islamist movements are shaking the region in a manner similar to Nasser’s pan-Arabism. Where Nasser had Radio Cairo to spread his message, today’s revolutionaries have Facebook and Twitter.

To be sure, there are also big differences. Vladimir Putin’s Russia is a thorn in the side of the United States today, but it does not pose so grave a threat as did the Soviet Union. Nor is there a contemporary Arab figure analogous to Nasser. The role played by Egypt in the international system of the 1950s does bear some resemblance to that played today by Iran, but the differences are almost as great as the similarities.

Nevertheless, many of the key questions that plagued Eisenhower continue to challenge us today as the Obama presidency nears its end. Should Washington make policy toward Arab and Muslim regimes and publics collectively, or should it focus on the narrow interests of specific elites? Is Israel a liability or an asset? In a region so riven with conflict, how much support does America owe its allies? Indeed, what criteria should the United States use to distinguish between allies and enemies?

The story of Eisenhower’s relations with Nasser offers a sober lesson in the dangers of calibrating that last distinction incorrectly and of then stubbornly sticking to one’s erroneous analysis. That was not Eisenhower’s way. The first American president to formulate a comprehensive strategy for the Middle East, he was also one of the most sophisticated and experienced practitioners of international politics ever to reside in the White House. Thanks to his military experience, he was accustomed to reviewing his actions and assessing their effectiveness; when he made mistakes, he paused, thought deeply about them, and adjusted course as necessary.

The hard lessons Eisenhower learned from the Suez Crisis, and then acted upon, have an enduring quality. They may not provide us with a detailed route out of the Middle Eastern labyrinth today, but they can certainly make us wiser about how to negotiate it.

This essay is adapted with permission from Ike’s Gamble: America’s Rise to Dominance in the Middle East by Michael Doran, released today by the Free Press/Simon & Schuster. Copyright © 2016 by the author.

Ike vs. Obama in the Middle East