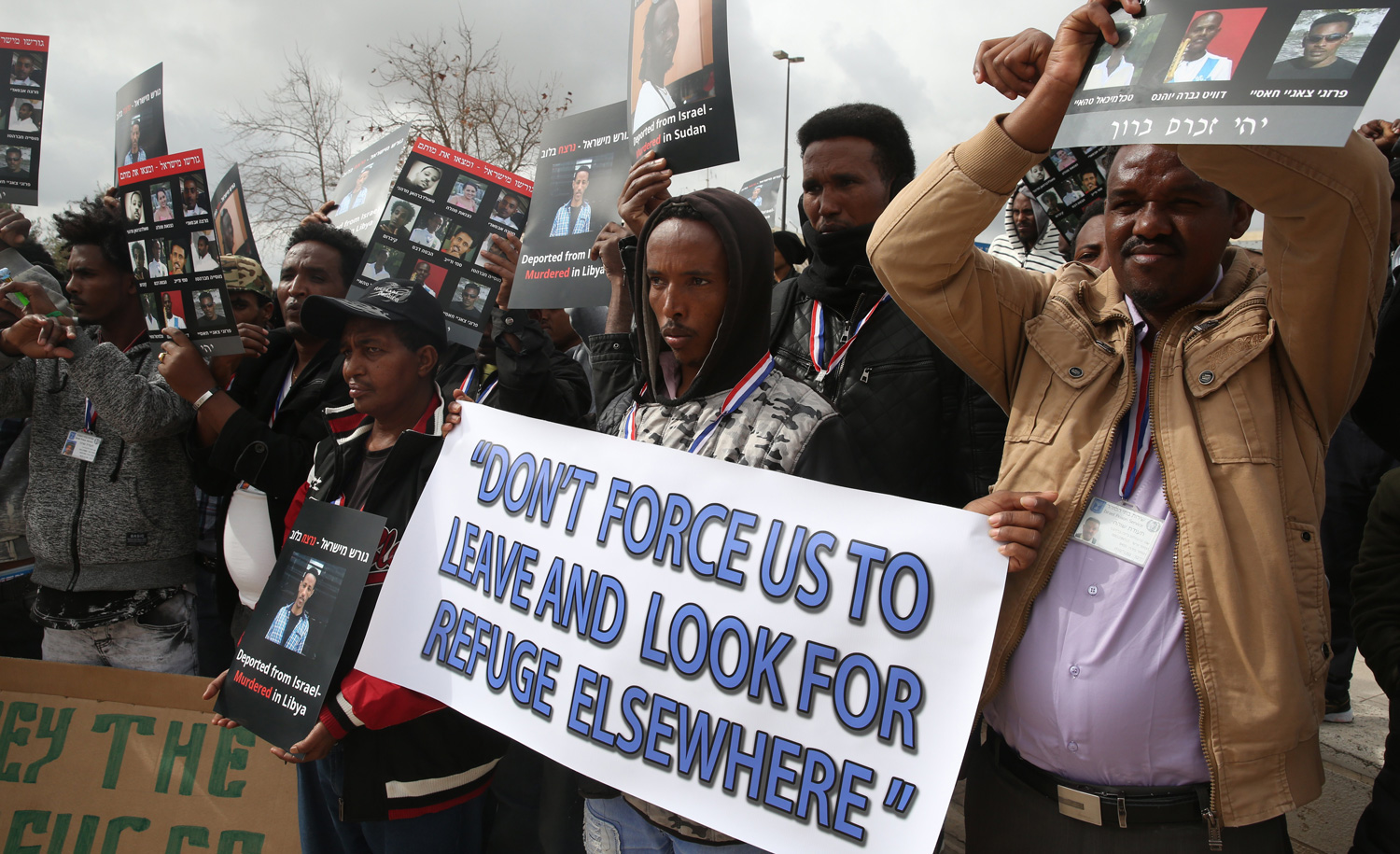 On the night of Shavuot—in Israel, it’s a one-day holiday—I took part in a secular tikkun leyl shavuot, an adaptation of the traditional religious custom of staying up past midnight in Torah study to commemorate the revelation at Sinai. My role was to be on a panel that had as its subject the biblical verse (I am using the King James translation), “Thou shalt not oppress a stranger: for ye know the heart of the stranger, seeing ye were strangers in the land of Egypt” (Exodus 23:9). The verse was chosen because, on Shavuot, the book of Ruth is read with its story of just such a “stranger,” a Moabite woman who joined the people of Israel, married one of its sons, and gave birth to the future grandfather of David.

What the tikkun’s organizers especially wanted the panel to address, however, was not so much the book of Ruth as the roughly 40,000 illegal Eritrean and Sudanese immigrants who are now “strangers” in Israel, where they live in difficult, crowded conditions and with an undefined legal status that leaves them with no clear right to work, to receive social services, or to remain in the country without the threat of jail or deportation. (Thousands actually have been jailed or deported to African countries willing to take them.)

Concentrated in the poor neighborhoods of south Tel Aviv, these immigrants entered Israel clandestinely from Egyptian Sinai in the years before the construction of the fence that now seals the border. Some have been living in Israel for as long as ten or fifteen years, and some have Israeli-born, Hebrew-speaking children who are as status-less as their parents. Although many fled war or famine, hardly any has been recognized as a legitimate refugee by the Israeli government. Those with work have low-paying, menial jobs that come without social benefits or security.

Apart from south Tel Avivians, who often complain about the presence of the immigrants, most Israelis are barely aware of them. Is this, the members of my panel were asked, a failure to “know the heart of the stranger”? Just who is the biblical stranger? And what, if anything, should this mean to Jews today?

The Hebrew word that is translated by the King James Version as “strangers” in Exodus 23:9 and elsewhere is gerim, the singular of which is ger. It comes from the verb gur, to live or reside somewhere, and a ger in the Bible is someone residing outside his own people’s land, even if he himself has never lived in or been to that land.

“Know that thy seed shall be a stranger [ger] in a land that is not theirs . . . and they [the land’s inhabitants] shall afflict them for four hundred years,” God tells Abraham, and the Israelites and their descendants remained gerim in Egypt despite having lived there for generations because they were thought of—both by themselves and by the Egyptians—as belonging to the land of Israel. By the same token, since the land of Israel was promised to them by God, others living in it under their rule were gerim, too, no matter how indigenous they were. The Israelites had lived among others as strangers and knew how hard that was; they should therefore appreciate the difficulty experienced by strangers living among them.

By biblical standards, then, the Africans in Israel (and for that matter, the Palestinians, too) are gerim. But as it so often did with the Bible, rabbinic tradition altered these standards. Here is how the 2nd-century CE Aramaic translation of the Bible attributed to Onkelos, always an accurate reflection of early rabbinic attitudes, renders Exodus 23:9: “And the proselyte [giyora] thou shalt not oppress, for you know the heart of the proselyte [giyora], seeing you were strangers [dayarin, literally “residents”] in the land of Egypt.” In this rendition, the parallel between the Israelite in Egypt and the non-Israelite in the land of Israel is broken. The comparison, rather, is between the Israelite in Egypt and the proselyte in Jewish society. In making that comparison, the rabbis changed the meaning of the word ger, which in rabbinic Hebrew, as in contemporary usage, designates a convert to Judaism. Rabbinically speaking, the Eritrean or Sudanese in south Tel Aviv is not a ger. He is at most what the rabbis called a ger toshav, “a resident [as opposed to a full] ger.”

The rabbinic distinction between the ger and the ger toshav stems from another passage in Exodus, in Chapter 12, which deals with the paschal sacrifice. After describing this ceremony, the Bible adds (again in the King James language):

The foreigner [toshav; the word comes from the verb la’shevet, literally to sit, but also to reside temporarily] and the hired servant shall not eat thereof. . . . But when the stranger [ger] shall sojourn [yagur] with thee, and will keep the Passover to the Lord, let all his males be circumcised, and then let him come near and keep it; and he shall be as one that is born in the land; for no uncircumcised person shall eat thereof.

This passage can be read in two ways. The way apparently intended by the Bible is that the ger who wishes to celebrate the Passover must first join the Jewish people by undergoing circumcision; if he declines to do so, he is barred from participating in the ceremony. By contrast, the way of the rabbis is to define the ger as one who has already undergone circumcision; whoever has not done so is a ger toshav who lacks the rights of a full ger.

Does it matter which reading we adhere to? Not necessarily. It is possible to be an observant Jew who accepts rabbinic authority and to understand the commandment to be compassionate toward the stranger as also referring to the ger toshav. Whether, for those who take the Bible and Jewish tradition seriously, Israel owes non-Jewish residents like the Sudanese and Eritreans a special measure of compassion because of Jewish historical experience, or whether this debt is owed to converts to Judaism alone, thus remains a question of textual interpretation—an interpretation that obviously depends on one’s general outlook. Nor, just as obviously, does one have to be Jewish or Israeli in order to believe that one’s country has an obligation to treat its “strangers” fairly. Whether it helps to be that, or should help, is something else.