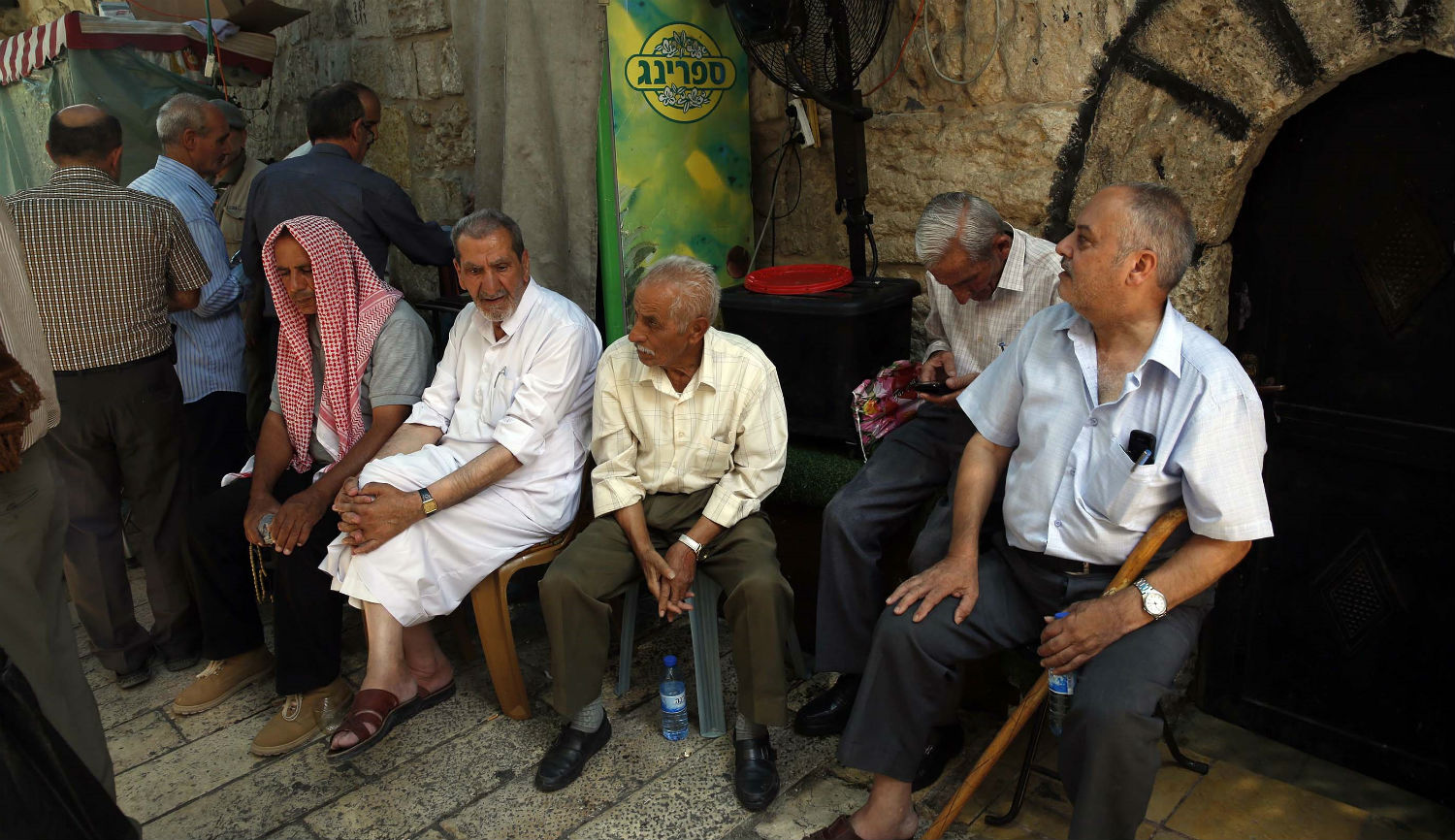 When three terrorists killed two Israeli policemen on Jerusalem’s Temple Mount on July 14, thereby precipitating a chain of further Arab violence that has not yet abated, what shook Israelis was not just the fact that the crime was committed at Judaism’s holiest site; it was that it originated within Israel’s pre-1967 borders and was committed by Israeli citizens. The murderers were residents of Umm al-Fahm, Israel’s third largest Arab city. No wall or checkpoint separates its residents from the rest of the country; yet it is a base for Islamist anti-Zionist politics.

For six weeks last summer, I lived ten minutes by car from Umm al-Fahm, at the intersection of Israel’s Arab and Jewish societies. While studying Arabic at Givat Haviva, an institute promoting Arab-Jewish reconciliation, I traveled to villages and towns in the so-called Triangle, the area in whose three corners sit the towns of Umm al-Fahm, Baqa al-Garbiya, and Taibe, and that cumulatively is home to the largest concentration of Arab Israelis. At the bus stops of Wadi Ara, in the heart of the Triangle, Jews and Arabs mix daily. In the shopping center of Pardes Hanna, the region’s main Jewish town, one is as likely to hear Arabic as Hebrew. Jews also frequent Arab-owned stores in Baqa al-Garbiya and Barta’a, where Hebrew signs testify to intercommunal commerce.

Foreign journalists usually focus on the West Bank and Gaza, so Israeli Arabs tend to be overshadowed. But their successes and their grievances, the nature of their interactions with Israeli Jews, and their position as citizens tugged by conflicting emotions, make up a story of considerable interest, with a message of particular relevance as, in the aftermath of murders committed by three of their own, their Palestinian cousins have violently rioted over metal detectors at the Temple Mount.

Among my interactions with Israeli Arabs, those centering on religion and politics were the most enlightening. When it came to religious observance, for example, it was obvious—from the clothing they wore and whether or not they broke for prayer five times a day—that the Islam practiced by my Muslim teachers at Givat Haviva was markedly diverse. Yet each of them would invariably assert that his or her individual practice was wholly consistent with “true Islam” (al-Islam al-haqiqi).

To me as a Jew, this was strange. Many non-Orthodox Jews, for example, will acknowledge the traditional prohibition against using electricity on the Sabbath, but stipulate that they don’t adhere to it. By contrast, none of my Muslim interlocutors admitted to failing to observe any of Islam’s requirements.

I was able to test their insistence on this point when it came to the issue of women’s clothing in particular. In Wadi Ara, I’d noticed, most women covered their hair with a hijab, and many in public wore a loose-fitting cloak called a jilbab. At the same time, some young women wore neither, opting instead for Western clothing, while others covered their hair but dressed in tight pants and tops. Among my four female teachers, only one wore a hijab. When I queried them about these evident discrepancies, they explained that Muslim women were required to dress modestly but not to cover their hair, so that the custom of wearing a hijab was beyond Islam’s requirements.

That everyone claims to be fully observant is a sign of Islam’s enduring power over the mindset and habits of speech adopted by its adherents. In some areas of life, the results may seem anodyne enough—or mere curiosities. In others, especially when it comes to politics, the reflexive substitution of doctrine for rational perception and any acknowledgment of inconsistency takes on a different and much more ominous coloration.

For the most part, with the exception of a shooter on Tel Aviv’s Dizengoff Street in January 2016 and the most recent Temple Mount attackers, the Arabs of the Triangle have not been a source of anti-Israel terrorism and have not become a fifth column. In my conversations with them, they generally voiced appreciation of their Israeli democratic rights (while freely criticizing many government policies). At the same time, however, they also called themselves “’48 Arabs” or “internal Palestinians”—that is, Palestinians who happen to reside within pre-1967 Israel—and would commonly identify themselves with the Palestinian national movement.

One of my hosts, a civics instructor in an Arab public school, explained over a shared plate of mashawi (kebab and vegetables) that he teaches his students about the Ottomans, then the British, then the Zionists. Of course, he added, he also teaches his students “their history,” that is, the rise of Palestinian nationalism and the nakba, or “catastrophe,” the term favored by Arabs around the world to refer to the 1948 establishment of Israel—his and his students’ country—and to the defeat of the Arab armies bent on annihilating it.

Our program heard from one man about his personal experiences during the nakba. As a teenager he had fled his native Kafr Qara in order to avoid an imminent clash between Arab militias and the Jewish Haganah paramilitary force. The Haganah took the town, but then Iraqi forces, part of the six-nation Arab assault on the nascent Jewish state, seized the area to which he had fled. After eleven months under Iraqi military rule, he returned to Kafr Qara, which had been included on Israel’s side of the new armistice line.

The occasion, he said, was a happy one. At a welcoming ceremony for the returnees, the Israeli commanders and local Arab leaders delivered speeches honoring each other’s side, and the Israelis provided food that was otherwise lacking because farms had lain fallow during the fighting. Israeli soldiers also helped rebuild a burned-out school and replaced damaged furniture—behavior that contrasted strikingly with the Iraqis’ cruel treatment of Palestinian Arabs.

And yet, Israel’s founding was all a nakba. The catastrophe was that a Jewish state arose at all in a land that Palestinians, evidently still including many Israeli Arabs, consider entirely their own.

Kafr Qara, where we heard this story, is today a town of eighteen-thousand souls and is the pearl of the Triangle, with wide roads that give it a suburban atmosphere very unlike the generally claustrophobic air of older, densely populated Arab towns. Boasting more doctors per-capita than any single locale in Israel, Jewish or Arab, it is also home to a school, Bridge Over the Wadi, which educates Jewish and Arab children together in both Hebrew and Arabic. At the Triangle Research and Development Center, Israeli Arab scientists and engineers work to produce more efficient solar panels, to battle cancer, and to prevent a certain breed of flies from ruining the fruit harvest.

In a visit with Muhammed Said Masarwi, a former judge, we heard about the town’s success as an Arab model of economic strength and good Arab-Jewish relations. As more women have entered the workforce, men are no longer the sole breadwinners, and the residents’ standard of living is rising. The roughly 250 doctors plus other medical personnel hailing from Kafr Qara can be found serving in most Israeli hospitals, from heads of surgical departments to the janitor cleaning the floor—and the janitor’s son, Masarwi insisted, “will grow up to be a doctor.”

I heard such optimism from almost everyone in the Triangle I spoke to. Of course I also heard laments, mostly about poor government service and frequently about housing policy. Israeli bureaucracy makes it difficult for anyone to acquire a building permit, but it’s especially hard for Israel’s Arabs. Their towns and villages cannot expand, often because they border Jewish National Fund forests that cannot be cut down for development. As a consequence, they have to build up, not out, which is why Arab towns often feature homes rising to four, five, or six stories—luxuriously grand by Israeli standards and designed to house multiple generations of a family.

Local leaders, I was told, continually lobby their representatives in the Arab parties in the Knesset to reform the land laws. But many of those representatives are less interested in improving life for Israel’s Arab citizens than in challenging Israel’s West Bank policies.

And here we come to the major problem, and return to our theme. When I asked one of our teachers if he’d support a peace plan that would move the border to put his town within a Palestinian Arab-majority state, he responded, honestly and dismissively, “Do you see what it is like to live in an Arab country?” Yet Israeli Arabs do not have a single figure at the national level who openly favors their living as law-abiding citizens in a democratic, Jewish-majority state.

In the immediate wake of the July 14 shooting on the Temple Mount, the responses of Israeli Arab political leaders ranged from mild disapproval to open endorsement of the attack. After ten hours of silence from the Knesset’s Joint [Arab] List, party chairman Ayman Odeh offered a half-hearted condemnation of violence and then blamed the Israeli government for making the situation worse by “turn[ing] the conflict from a political one into a religious one.” Haneen Zoabi, a Knesset member from the same party, said, “We place the full responsibility of everything that is happening on Israel’s occupation policy.” Several of their colleagues, while weakly calling for an end to violence, blamed Jews and the Israeli government for provoking the murders.

Within days, after weapons had been discovered on the Temple Mount itself, and Israel installed metal detectors and cameras to ensure security, a wave of Arab rioting swept the area, egged on if not masterminded by Mahmoud Abbas’s Palestinian Authority in order to shift blame onto Israel for “everything that is happening” at the Temple Mount and everywhere else. In fact it was not Israel but the Palestinians, contrary to the scurrilous charge by Ayman Odeh, who were now successfully turning the conflict “from a political one”—and in this case from a straightforward issue of security—“into a religious one,” indeed into a supreme religious duty. Once again, the implacable power of spiritual doctrine to invert perceptions of reality had been made manifest—this time with violent effect.

The health of Jewish-Arab relations in Israel depends on how Israel’s Arabs think about citizenship in their Jewish-majority country. In the formation of that thinking, the words of their political leaders matter, especially when fellow Arab citizens engage in murderous violence. Amid the undeniable signs of progress on many fronts, a chilling sign of regress is that this week, approximately 3,000 people attended the funerals of the Temple Mount terrorists in Umm al-Fahm. In a display familiar to observers of such rallies in the West Bank, the Palestinian flag flew and the faithful swore to become “martyrs for al-Aqsa.” This procession took place not in the West Bank or in Gaza, but inside the Green Line.

If such scenes are not to become the new normal, Israeli Arabs will need to take responsibility for their own future as loyal citizens of Israel and to find and elect new leaders similarly disposed, and similarly determined.