The Jewish (and Not-So-Jewish) History of the Word "Palestine"

There’s a lot in this name. 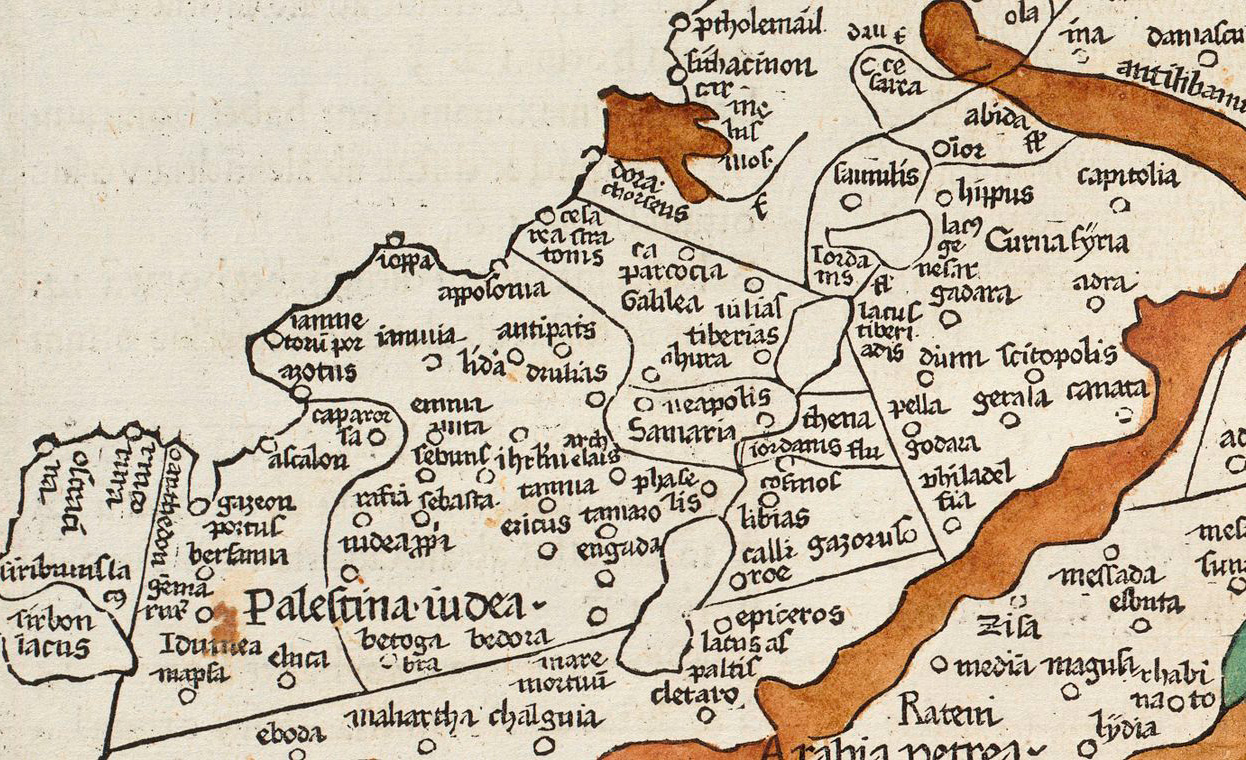 A map of Palestine published in a 1482 version of Ptolemy’s Cosmographia by Nicolaus Germanus. Wikipedia.

My previous column dealt with linguistic evidence for Israelite sailors’ having reached India from Palestine in the time of King Solomon. About it, Anson Laytner writes:

In Solomon’s day there was no Palestine, so the trip would have been impossible! Seriously, though, if Mosaic’s own team misuses terminology, what about the rest of us? Perhaps it is time for you to write something on the geographical names Judah, Israel, Judaea, Palestine, etc.

Seriously, this is a subject that I have written on—and more than once during my years as a Jewish-language columnist. And yet, although I dislike having to repeat myself, perhaps Anson Laytner is right that it deserves to be written about again. Few place names these days arouse quite as much passion as does “Palestine,” nearly all of it directed against Israel. To any Jew who was old enough to read at the time the state of Israel was created, this can only seem grimly ironic, because “Palestine” was once a Jewish word, too. I can’t watch a news clip of anti-Israel demonstrators chanting “Palestine will be free/ From the river to the sea!” without remembering the blue-and-white Jewish National Fund collection box that stood in the kitchen of my parents’ New York apartment in 1947-48, when I was a boy of eight or nine. On it, across a map of the Jewish homeland, was written in flowing letters: “Fight for a Free Palestine!”

There was nothing exceptional about this. English and French “Palestine,” German Palästina, Polish Palestyna, Russian Палестина: this was the standard word in European languages, used by Jews no less than by others, for the country whose greater part was renamed Israel after 1948. It had been the standard word since the early 19th century, when it gradually replaced the term “the Holy Land” that had been in use in the Christian world in medieval and early modern times. When, in 1917, the British government issued the Balfour Declaration, it proclaimed, “His Majesty’s government view with favor the establishment in Palestine of a national home for the Jewish people.” Jews, unless they were anti-Zionist, were exultant over this wording. It was the Arabs who weren’t.

It is true that in speaking or writing Jewish languages like Yiddish, Hebrew, or Ladino, 19th- and early-20th-century Jews did not generally use “Palestine.” Their own term, current since early rabbinic times, was “Erets-Yisra’el,” the Land of Israel.

It is also true that when, after putting down the Bar-Kokhba revolt in 135 CE, the Romans officially renamed their administrative province of Judea, which included much of the Land of Israel, as Syria Palaestina, their motives were anti-Jewish. Palaestina was the Pleshet of the Hebrew Bible, the land of the Plishtim or Philistines, the archenemies of the biblical Israelites. By giving the name “Palestinian Syria” to the country that had been unsuccessfully fought for by the Jewish people in two bitter rebellions, the Romans were seeking to deny the Jewish connection to it. Moreover, whereas biblical Pleshet had signified the Philistines’ stronghold of the country’s coastal plain, the name was now extended to the traditionally Israelite hill country that the Philistines had never occupied.

And yet many people have names for their countries that are not used by the rest of the world, and some have names for them that are no more historically accurate than was Syria Palaestina. Although Germans call their native land Deutschland, they are not offended when Americans call it Germany and French call it Allemagne, and they unthinkingly use these names when speaking English or French; nor do the inhabitants of Holland protest the absurdity of being called “Dutch” in English when, in their own language (called by them Nederlands or Hollands), Duits means “German.” And while the whole world says “America” just as Americans do, who, Americans included, stops to reflect that this name comes from that of the Italian explorer Amerigo Vespucci, to whom the discovery of the American continent was erroneously attributed in 1507 by the German mapmaker Martin Waldseemüller? (Mr. Laytner, I suppose, would retort that America couldn’t have been discovered before 1507, there having been no place by this name prior to that date!)

Of course, no Germans are laying claim to Holland because its inhabitants are called Dutch, and no one is demanding the abolition of the USA because it was named for the wrong person, whereas quite a few people favor the dismantlement of Israel because it is on “Palestinian” land. The Palestinian Arab hijacking of the words Palestine and Palestinian goes back to 1948, and Jewish zeal for the new state of Israel, it must be said, bears its share of the blame for this. Inasmuch as the Arabs, following their 1948 defeat that resulted in Palestine’s being divided into two unequal parts, insisted that it was still one country and would return to being one country under Arab rule, it was only natural for many Israelis and Jews to say the opposite—that is, that Palestine no longer existed, its place having been taken by Israel and the Jordanian-controlled “West Bank” of the Jordan.

This went on until 1967, when Israel conquered the “West Bank,” too, and all of Palestine fell under its rule. However, since, apart from eastern Jerusalem, it did not annex the West Bank, the word “Israel” continued to refer, even for Israelis, to the pre-1967 state of Israel alone; what was conquered, depending on one’s political point of view, either remained “the West Bank” or came to be called “the territories,” “the occupied [or administered] territories,” or “Judea, Samaria, and Gaza.” (After Israel’s 2005 evacuation of the Gaza Strip, the last became just “Judea and Samaria.”) If one wished to refer to Israel and the occupied territories together, one could do so in Hebrew as Erets-Yisra’el, but what, if determined to shun the word “Palestine,” could one say in English or other languages?

And there, Mr. Laytner, is the rub. As a discrete geographical area, bounded on the west by the sea, on the east by the Jordan Valley, on the north by the mountains of Lebanon, and on the south by the Sinai desert, Palestine exists and existed in Solomon’s time, too. What then, if not “Palestine,” are we to call this area in English? “Erets-Israel”? I wish you luck if you think you can sell that. “The Holy Land?” The world isn’t about to go back to the 18th century. “Canaan?” That’s going back to the 18th century BCE. “Cisjordan?” Yes, the French sometimes say “Cisjordanie,” but French isn’t English.

I can’t think of any other ideas. And that being the case, we have two choices: either we pretend that the land “from the river to the sea” is not, geographically, one country—or else we assert that it is and call it Palestine. This doesn’t prejudge the question of whom this country, politically, should belong to. One can legitimately claim all of it for the Jewish people. But in order to do so, one needs a word for it, and “Palestine” is the only one there is.

The Jewish (and Not-So-Jewish) History of the Word "Palestine"