The Fantasy of an International Jerusalem

One-hundred years ago, over a lunch, the internationalization of Jerusalem became irrelevant—and it remains so. 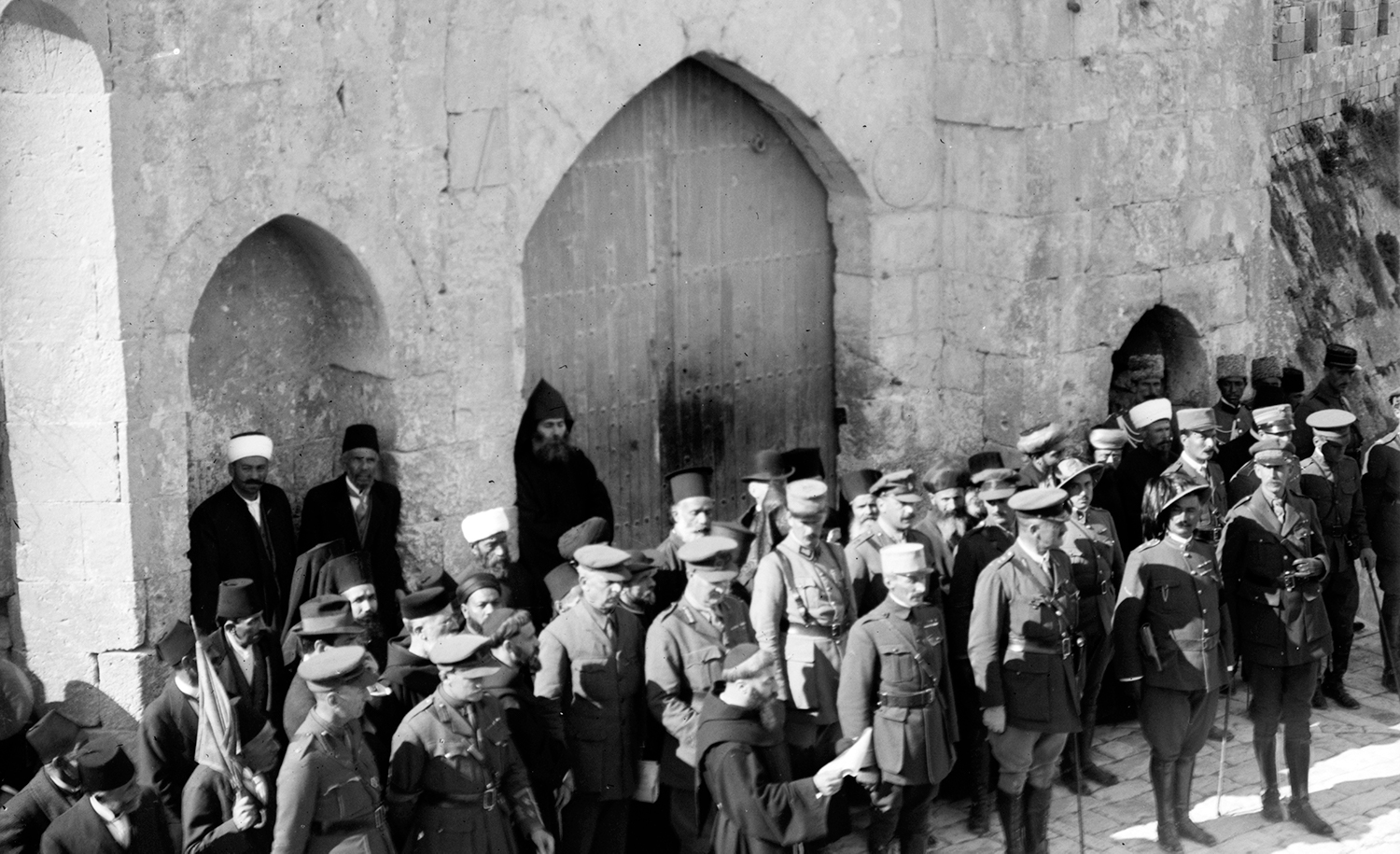 In the uproar over President Trump’s announcement of U.S. recognition of Jerusalem as Israel’s capital, one constant refrain has been the insistence that, by longstanding international consensus, the city’s status has yet to be decided. In the portentous words of the recent UN General Assembly resolution protesting the American action, “Jerusalem is a final-status issue to be resolved through negotiations in line with relevant United Nations resolutions.”

The most “relevant” of those prior resolutions was the November 1947 resolution proposing partition of Palestine and envisaging, in addition to two independent states, one Arab and one Jewish, an entirely separate status for Jerusalem as a city belonging to no state but instead administered by a “special international regime.”

One might have thought that the wholesale Arab rejection of the entire partition plan, in all of its parts, would also have put paid to the idea of an internationalized Jerusalem. Evidently, however, this fantasy is too convenient to lie dormant forever.

That is why it’s useful to know that, almost exactly three decades before the 1947 UN plan, internationalization of Jerusalem was killed—and killed decisively. Who killed it? Thereby hangs a tale, but here is a hint: it was neither the Arabs, nor the Jews.

Two-and-a-half weeks ago, Jerusalem marked the 100th anniversary of the surrender of the city to British General Edmund Allenby. On December 11, 1917, Allenby crowned his military success in wresting Jerusalem from the Ottoman Turks and their German ally in a ceremony that resonates to this day.

In a show of seeming humility, Allenby entered the city’s Jaffa Gate on foot, without flags or musical fanfare. Mounting the platform at the entrance to the Citadel (the Tower of David), he then read a straightforward proclamation: the city would be placed under martial law, and the status quo in regard to the holy places would remain in place. After shaking hands with a selection of Jerusalem’s notables, he departed, having spent all of a quarter-hour in the city.

The Illustrated London News carried a photograph, later famous, of Allenby striding on foot into Jerusalem; it depicted the scene as the conqueror’s “simple and reverent entry into Jerusalem.” In fact, the photo op had been carefully stage-managed to create a propaganda point against the German enemy. Kaiser Wilhelm II, upon visiting Jerusalem in 1898, had entered on a white steed, banners flying. So, three weeks before Allenby arrived there, he received this instruction from his superior, General William Robertson, chief of the imperial general staff:

In the event of JERUSALEM being occupied, it would be of considerable political importance if you, on officially entering the city, dismount at the city gate and enter on foot. German emperor rode in and the saying went ’round [that] “a better man than he walked.” Advantage of contrast in conduct will be obvious.

It was obvious indeed, and well-documented in British propaganda photos and films. This is why, even now, the victors’ procession and Allenby’s declaration take pride of place in the memory of that December 1917 day. Two weeks ago in the Old City of Jerusalem, before an enthusiastic audience of hundreds, both the procession and the proclamation were reenacted.

But another event also took place on that same day in 1917, away from the cameras but just as noteworthy. Indeed, that second event offers the best explanation for why internationalization of Jerusalem never stood a chance in 1947, or at any time since.

When Jerusalem fell, the secret Sykes-Picot agreement of May 1916 was still in force. That agreement, for the partition of the Ottoman empire, had been reached by the major Allied powers: Britain, France, and Russia. Because of the October Revolution, just weeks before Jerusalem’s capture, Russia had dropped out, but that still left Britain and France (as well as Italy, which jumped late into the alliance).

Since Britain and France both laid claim to Palestine, and wanted to forestall a clash in advance of its conquest, they had decided to share it. By agreement, Jerusalem, Jaffa, and the zone between them were to have an “international administration,” the form of which would be decided through Allied consultation. Sykes-Picot was thus the very first plan for the internationalization of Jerusalem.

But as the war progressed in Palestine, British imperial forces did nearly all of the fighting and dying in battle against the Turks. Lloyd George, the British prime minister, recoiled at the idea of sharing a British conquest with the French. In April 1917, he told the British ambassador to Paris that “the French will have to accept our protectorate; we shall be there by conquest and shall remain.”

The French, however, were just as determined to assert their rights under the Sykes-Picot accord. And so, when the victors’ procession entered Jerusalem on December 11, not only did it include a small French military contingent. It included François Georges-Picot, the French diplomat who had negotiated the agreement.

Picot had just been named by his government as “High Commissioner of the French Republic in the Occupied Territories of Palestine and Syria.” He also had precise instructions from the French prime minister: “You will have to organize the occupied territories so as to ensure France an equal footing to that of England.” In November 1917, Picot proceeded to remind Allenby’s political officer, Brigadier General Gilbert Clayton, of these facts.

“[O]ver a year ago,” Clayton would report Picot as saying, “it was agreed between the British and French governments that, pending the final settlement of the peace terms, any conquered portions of Palestine should be jointly administered.” Moreover, Clayton added, Picot himself operated “in the full conviction that he was to be the French representative in a joint Anglo-French provisional administration which was to govern occupied enemy territory in Palestine until the end of the war—when some sort of international arrangement would be made.”

That is why Picot had set off for Jerusalem on the coattails of Allenby’s victorious army. But Allenby also had his orders. Chief of Staff Robertson had instructed him two weeks earlier that he must “not entertain any ideas of joint administration.” The way around the French was to keep Jerusalem and the rest of the country under a military regime as long as the war lasted. Since Allenby was the commander-in-chief, military rule meant Allenby’s own rule, exercised through any military governors he might appoint.

And that’s just what Allenby announced in his famous proclamation on the steps of the Tower of David. Jerusalem, he told the assembled crowd, had been occupied “by my forces. I therefore here and now proclaim it to be under Martial Law, under which form of administration it will remain so long as military considerations make it necessary.”

But just what did this mean? And did it exclude the French? After the ceremony adjourned in Jerusalem, Allenby, Picot, and the other chief participants retired to lunch at military headquarters just outside the city, near Ein Karem. Major T.E. Lawrence (that is, “Lawrence of Arabia”) attended as well, having come up from Aqaba at Allenby’s bidding. In his memoir Seven Pillars of Wisdom, Lawrence described the scene:

On us fell a short space of quiet, to be shattered by Monsieur Picot, the French political representative permitted by Allenby to march beside Clayton in the entry, who said in his fluting voice: “And tomorrow, my dear general, I will take the necessary steps to set up civil government in this town.”

It was the bravest word on record; a silence followed, as when they opened the seventh seal in heaven. Salad, chicken mayonnaise, and foie-gras sandwiches hung in our wet mouths unmunched, while we turned to Allenby and gaped. Even he seemed for the moment at a loss. We began to fear that the idol might betray a frailty. But his face grew red: he swallowed, his chin coming forward (in the way we loved), whilst he said, grimly, “In the military zone the only authority is that of the commander-in-chief—myself.” “But Sir Grey, Sir Edward Grey . . . ,” stammered M. Picot. [Grey, by that time Lord Grey, had been British foreign secretary in 1916, when the Sykes-Picot agreement was concluded.] He was cut short. “Sir Edward Grey referred to the civil government which will be established when I judge that the military situation permits.”

It is widely acknowledged that Lawrence’s reliability as a witness to events out in the desert leaves much to be desired. But this episode occurred on Allenby’s side of the Jordan, and in the presence of other British officers. His account, then, however colorfully phrased, may be regarded as trustworthy.

Indeed, Lawrence may even have softened the edges. Philip Chetwode, commander of a corps in Palestine, also attended the lunch; in a 1939 letter to another officer who had been there, and who was writing a biography of Allenby, Chetwode wrote:

I wish to goodness you could put in what the Frenchman said to Allenby and what Allenby said to him, when the Frenchman said he was going to take over the civil administration of Jerusalem at once. However, that, of course, can never appear in a book.

Since a version had already appeared in Lawrence’s Seven Pillars of Wisdom, the bit of Allenby’s put-down that could “never appear in a book” might well have been gruffer still. (Louis Massignon, a French officer attached to Picot, wrote that “Allenby threatened Picot harshly with arrest if he interfered.”)

This didn’t exhaust Picot’s efforts, but the die had been cast. Ten days later, Picot complained that there had been no progress toward “Anglo-French civil administration,” and told a British interlocutor that “he would never have agreed to come out [to Palestine] if he had known.” Although Picot’s French Commission tried to (re)assert a “religious protectorate” over Catholic holy places (mostly in opposition to the Italians), there would be no “international administration” in Jerusalem, only exclusive British control.

Moreover, while Allenby had invoked military necessity, the British soon developed a full-blown thesis as to why they, and only they, were qualified to rule Jerusalem. The British, they averred in brief, were purely neutral. As Lloyd George put it, “being of no particular faith [we are] the only power fit to rule Mohammedans, Jews, Roman Catholics, and all religions.”

Thus did the first agreement to internationalize Jerusalem come to naught.

Why is this significant today? Had Allenby wavered, and had some sort of joint administration come into being after World War I, it might have created institutions of international governance. These might have accumulated 30 years of experience by 1947, when the United Nations recommended the partition of Palestine and the internationalization of Jerusalem. Instead, during those decades, the British preferred to rule Jerusalem exactly as the Ottomans had done before them—namely, by dictate.

In 1947, internationalization thus had no precedent, no bureaucratic foundation, and no mechanism for implementation. As in 1916, it wasn’t a true option, but a placeholder for indecision.

In the century since Allenby entered Jerusalem, the city hasn’t known a single day of international administration. Indeed, it hasn’t had such a day in 3,000 years. The idea that it constitutes a kind of default solution for the future of Jerusalem is but one more example of a petrified piety. Internationalization became irrelevant over lunch a century ago, and it has remained so ever since.

The Fantasy of an International Jerusalem