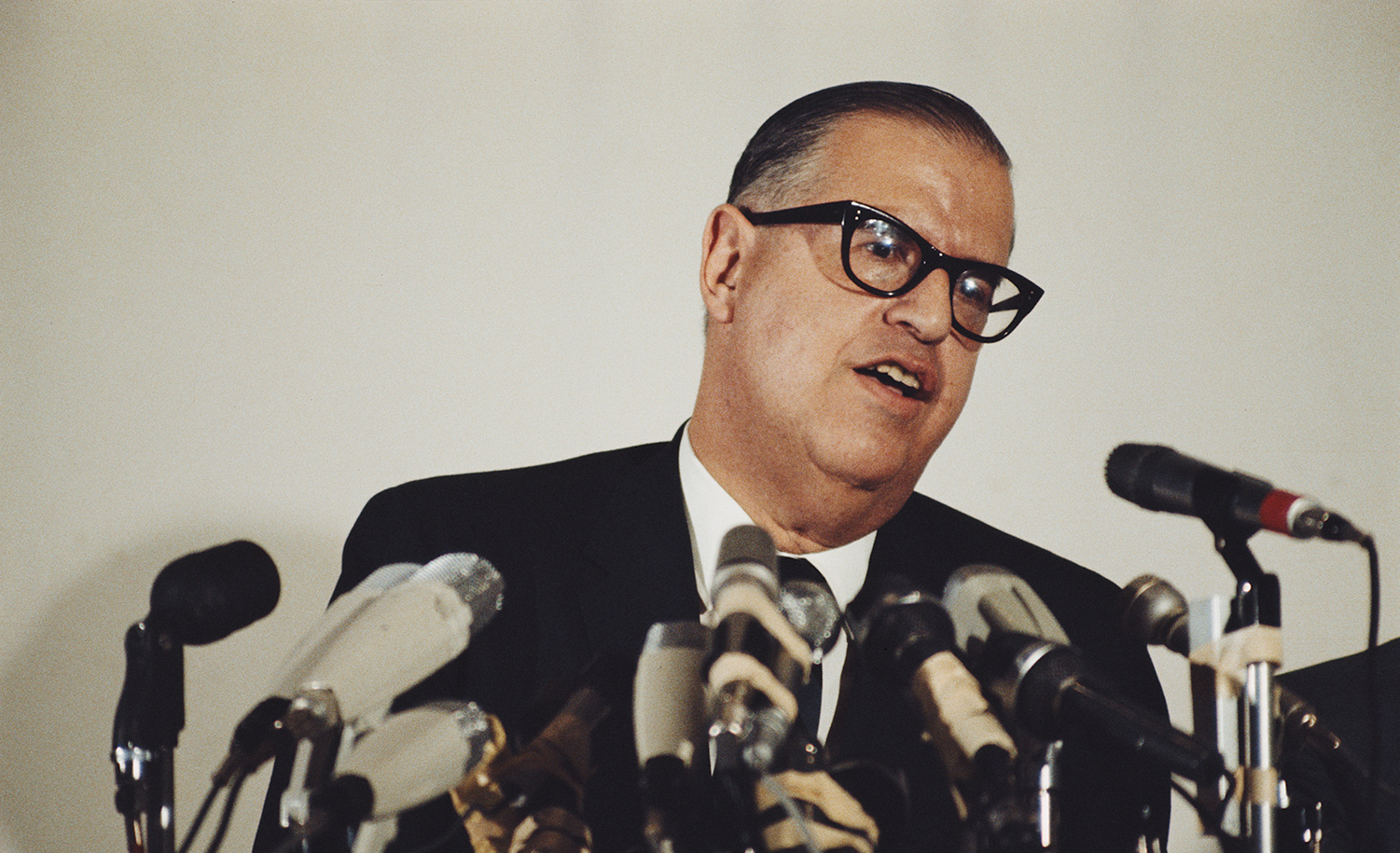 The Israeli diplomat and politician Abba Eban at a press conference in Tel Aviv in May 1970. Rolls Press/Popperfoto/Getty Images.

English has a new word, and it comes from Hebrew. It’s “hasbarah,” more frequently spelled in English (without its final Hebrew letter) as “hasbara.” In either spelling, the stress is placed on the final syllable.

What does it mean? In Hebrew, it denotes an organized effort or program to educate the public about some matter. When this effort has to do with defending Israel, the orchestraters of it are commonly organizations like the Jewish Agency and AIPAC, or such Israeli government institutions as the National Hasbarah Forum, which operates a department in the prime minister’s office in Jerusalem.

To many of Israel’s critics, however, “hasbarah” is something more sinister. Among the definitions of it that you will find on the Internet are: “a selected dissemination of Zionist propaganda as fact”; a web of “fabrications, half-truths, and downright lies” spun on Israel’s behalf; “a [form of] communication calculated to influence cognition and behavior by manipulating perceptions of [Israel’s] cause or position with one-sided arguments, prejudicial substance, and emotional appeals”; “a cynical attempt to flood the web and news media with favorable flackery in a vain attempt to tilt public opinion toward Israel,” and a “policing of social networks for Israel” by a “hasbarah troll brigade.”

Lately, “hasbarah” has even begun to be used in more than just an Israeli context. One now hears and reads of such things as “Chinese hasbarah” and “Turkish hasbarah,” and the word is gaining currency as a pejorative term for any social-media campaign to improve the image of this or that nation. Endorsing this trend, the Internet site Mondoweiss, which calls itself an “independent website devoted to informing readers about developments in Israel/Palestine,” recently stated:

We want Americans to start using the word “hasbarah” with all its cynical implications. After all, other foreign words have entered our language because we need them—schadenfreude, apartheid, chutzpah, glasnost, to name a few. We need hasbarah too. It describes a concerted form of propaganda that no one word in English captures.

Deriving from the consonantal root s-b-r, to think or have an opinion, and its ergative verb of l’hasbir, to explain, hasbarah both is and isn’t an old word. In traditional Jewish sources it is found only in the combination form hasbarat-panim, “[having] a friendly mien.” This comes from the rabbinic expression l’hasbir panim, to be friendly, which in turn comes from sever panim yafot, a pleasant or well-disposed look—that is, the look of someone with well-disposed opinions of others.

In its sense of “explaining,” which lies behind its contemporary meaning of (depending on how you view it) education or indoctrination, hasbarah is strictly a 20th-centuryism. You won’t find it in Eliezer Ben-Yehudah’s monumental “Complete Dictionary of Ancient and Modern Hebrew,” whose second volume, in which it appears only as the first word of hasbarat-panim, was published in 1902.

Which Hebrew speaker or writer first used hasbarah in its current sense, I don’t know. The earliest case that I’ve been able to track down occurs in a 1921 letter from Moshe Sharett, the future first foreign minister and second prime minister of Israel, to the prominent Labor Zionist intellectual Berl Katzenelson. In it, Sharett mentions a leaflet issued for purposes of “hasbarah” to all units of the British army in Mandate Palestine, in which “the politics of His Majesty’s government” are explained. The leaflet’s distribution was occasioned, Sharett writes, by the government’s concern over growing pro-Arab and anti-Jewish sentiment in the British army.

It was also in a military environment, it would seem, that the term hasbarah first came to be used widely in Hebrew. This happened in the Haganah, the semi-clandestine Jewish fighting force in the Mandate period, which created a hasbarah department in the late 1930s. In the Palmaḥ, the Haganah’s elite strike force that played a crucial role in Israel’s 1948 War of Independence, this went a step farther.

The Palmaḥ’s ranks came largely from left-wing and often pro-Soviet kibbutzim, and its practice, in imitation of the World War II Red Army, was to attach a non-combat officer to combat units with the assignment of leading discussions of military, political, and ideological issues and bolstering troop morale. The Red Army’s term for such an officer was politicheskii rukovoditel or “political official,” which was abbreviated in Soviet usage to politruk. And politruk was used informally in the Palmaḥ, too. The official Hebrew term for the position, however, was k’tsin ḥinukh, “education officer,” or k’tsin hasbarah.

Unlike the Soviet politruk, a trusted Communist-party cadre who was authorized to lay down the official line, issue commands, and punish those voicing subversive views, the k’tsin hasbarah had no powers other than his powers of persuasion. From the beginning, therefore, hasbarah had, operationally no less than linguistically, more the sense of explaining than of indoctrinating. The k’tsin hasbarah was more than a lecturer but less than a propagandist. His task was to listen sympathetically and convince the soldiers he spoke to of the logic and justice of what they were being asked to do, not to browbeat them into submission.

When the Haganah and the Palmaḥ were disbanded in 1948 and the Israel Defense Force (IDF) took over all the military functions of the new state, the office of k’tsin hasbarah, now more often referred to as k’tsin ḥinukh, was retained by the IDF. Concomitantly, a department of hasbarah, called the Government Information Service (sherut modi’in memshalti), was established. While the need for it was generally acknowledged, there was often a discomfort in Israel with the government’s being in the business of thought-molding. Over the years, hasbarah, sometimes called by that word and sometimes by different ones, was shuffled from place to place in the government structure in an attempt to find the right niche for it.

The idea of hasbarah is indeed inherently problematic. Ministries of information exist for the most part in authoritarian and totalitarian countries, and in a democracy like Israel’s it is arguable whether the organs of government themselves, as opposed to the politicians conducting and representing them, should take political positions. This is what made the columnist Anshel Pfeffer write in Haaretz last week:

Hasbarah is a waste of time. All it does is undermine Israel’s legitimacy. Because real countries don’t have to argue they are legitimate, Hasbarah’s one function is to deny Israel is a real country with real problems that need dealing with. . . . Next week, when we justly celebrate Israel completing its 71st year of existence, let’s do it the real justice it deserves and stop trying to justify it.

But, of course, other real countries do not have still other real countries, let alone millions of private individuals all over the world, insisting that they are illegitimate. The war for public opinion is as real as any war Israel has had to fight on the battlefield, and not one that it would be well-advised to run away from. As long as hasbarah relies on argument and reason, as it traditionally has done, rather than on threat and imprecation, it has its rightful place.

Even the author of The Goyim’s Guide to Hasbarah Trolls, one Jonathan Blakely by name, concedes that, unlike hardline propaganda, hasbarah has always been “more of a soft sell [that] seeks to inform, influence, and educate the ignorant” rather than to shout them down. As long as truth is on one’s side, one has to tell it as best one can.