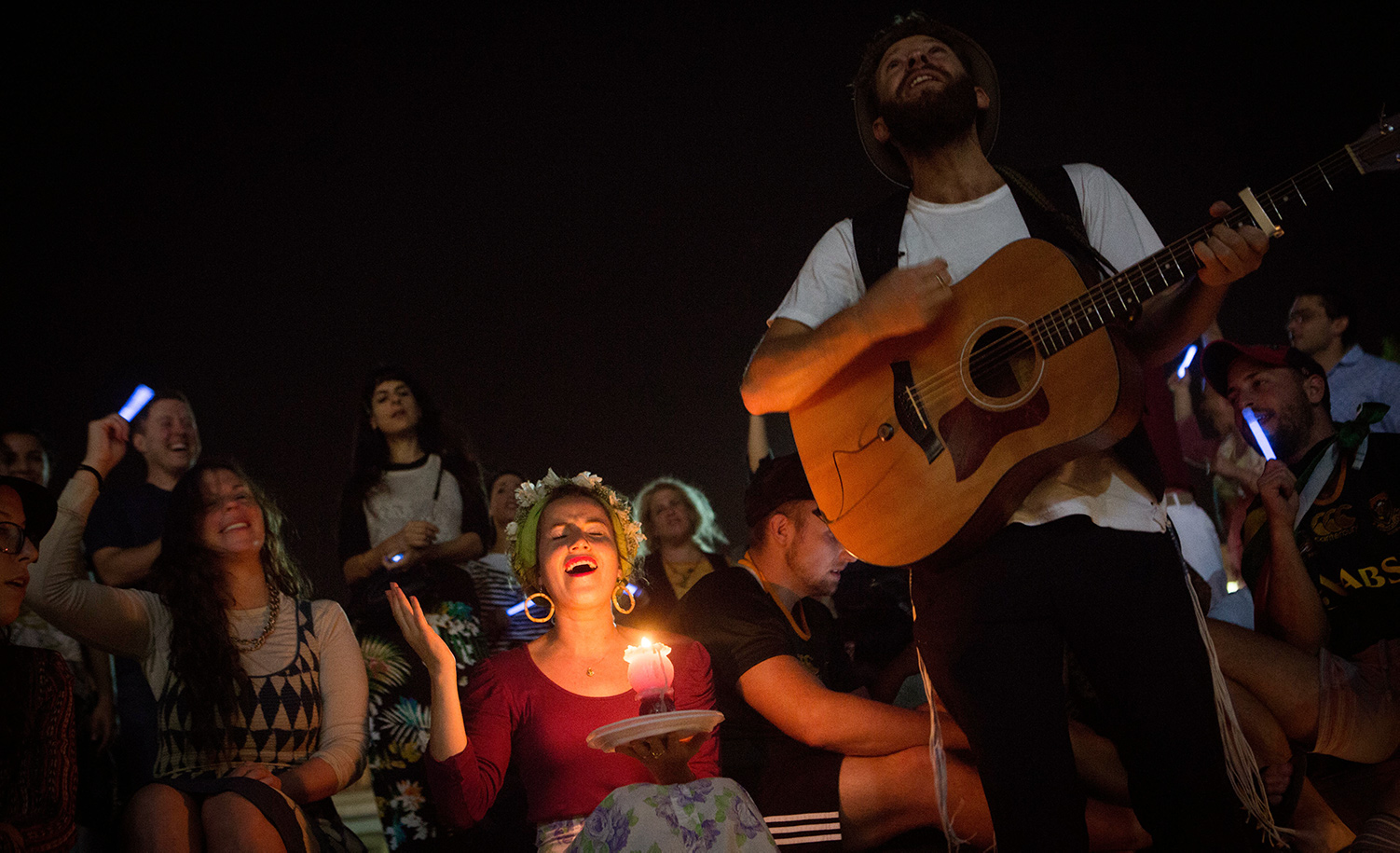 What has Zionism achieved? Like all revolutionaries, the early Zionists understood that in the new world they intended to create, a new kind of person would be required—in their case, a new kind of Jew, one not only speaking a new-old language in a new-old land but forging, or re-forging, a new-old identity.

This hugely ambitious goal is exactly what Zionism has achieved. That, at least, is the claim of a new Hebrew book entitled #IsraeliJudaism (Dvir Press 2018), which backs up that argument with a comprehensive study of contemporary Israeli Jewish society. Of the book’s two co-authors, Camil Fuchs and Shmuel Rosner, the former is an emeritus professor of statistics at Tel Aviv University and the latter a journalist and senior fellow at the Jewish People Policy Institute (JPPI). In #IsraeliJudaism, their individual talents are well matched, resulting in a portrait that is in equal parts a demographic study, a cultural introduction, and a work of social analysis. (An English-language edition is said to be in the works; in the meantime, an extensive English summary can be found here.)

Emerging from a survey conducted through JPPI, the book draws on 3,000 responses to an extensive questionnaire asking Israeli Jews how they think about their national identity as Israelis, about their religious identity as Jews, and about the relation between those two identities. Throughout, the authors remain committed to a descriptive tone, eschewing polemics in favor of an intimate, informal pose and concentrating more on how their subjects behave (“What do you do on the holidays, how do you keep Shabbat?”) than on what they believe.

On the basis of the answers to their questions, Fuchs and Rosner divide Israelis into four socio-political categories. The outright majority, at 55 percent, is made up of those exhibiting both a strong religious identity and a strong national identity that in practice are wholly intertwined; to them, the authors apply the (somewhat jarring) term “JewIsraelis.” Next, trailing far behind, we have “Jews” (i.e., those, mostly Ḥaredim or “ultra-Orthodox,” who prioritize their religious over their national identity), at 17 percent; “Israelis” (those, broadly secular, who prioritize their national identity), at 15 percent; and “universalists” (those identifying with neither category), at 13 percent.

When it comes to political affiliations, Fuchs and Rosner confirm the general rightward tilt in Israeli society, finding nearly 60 percent identifying as either right or center-right.

Summing up the qualities of the first category, which, strikingly, is larger than the other three combined, the authors write that the JewIsraeli “is confident about [generational] continuity, attributes a high level of importance to being Jewish, mixes Israeli nationality with Judaism, and shows a strong tendency to practice Jewish tradition.” To put it in everyday terms, this is a person who feels thoroughly Jewish when serving in the army and thoroughly Israeli when celebrating Passover.

This integral new Jew—the extraordinary fulfillment of the Zionist project—is the book’s key discovery, but not its only one. Further revelations follow, many of which confound easy assumptions.

Take the rising proportion of Ḥaredim in Israeli society: a development that, fueled by even higher birthrates than the already high fertility of their fellow Israeli Jews, is often depicted by pessimists as posing a demographic threat to the classical Zionist aim of a pluralistic and basically secular state; contrarily, optimists welcome it as a sure guarantee of a Jewish majority in the land.

For their part, however, Fuchs and Rosner point to something else entirely: the rising rates of attrition that, as their research confirms, are changing the shapes of both the ḥaredi and the non-ḥaredi Orthodox communities. Nearly a quarter of those who grow up in ḥaredi communities, the authors report, do not remain in them, and the same can be said for fully half of non-ḥaredi Orthodox Jews, who retain their nationalist orientation even as their religious observance declines.

Both of these trends refute the handwringing over an Israel allegedly becoming not only more religious but religiously more extreme. In fact, Rosner and Fuchs write, secularization is growing among each of their four demographic groups—suggesting an overall ideological spectrum that is coalescing more than it is fracturing.

If, for example, movie theaters that were once shuttered on Friday nights are now open, and if half of Israeli Jews go shopping on Saturday, fully eight in ten also have a special Shabbat dinner at home on Friday evening, and seven in ten punctiliously recite the Sabbath blessing over wine. Or again: if, on Yom Kippur, about a third of all Israeli Jews take to their bicycles on roads otherwise officially closed to vehicular traffic, about half believe that living in Israel, and being Israeli, are crucial components of Judaism itself; seven in ten believe that serving in the IDF is, in itself, a component of being a good Jew.

To the authors, these data, taken as a whole, limn a picture of a Judaism comfortably settling into citizenship, and a civic culture finding a religious Jewish shape. Having achieved the Zionist dream of normality, and resolved the problem of Jewish continuity, Israeli Jews reap the rewards by seamlessly inhabiting a congruent identity, certain of both their own synthesis of religion and nationality and the inevitability of its transmission. Indeed, over 60 percent of Jewish Israelis have complete confidence, registered as a perfect 10/10, that their children will be Jewish.

Are there, then, no reasons for concern? Such reasons exist, although admittedly some of the most concerning of them lie outside the authors’ mandate. Thus, the supposed assurance of Jewish continuity in Israel looks more troubling when the lens widens to include external threats like Iran and Hizballah, as well as internal divisions of the kind that, for a recent example, surfaced during the recent prolonged election season. The cushion provided by living a Jewish life in the Jewish state coexists with the sheer effort required to defend that state against unyielding aggression without and fractious political accusations of threat and danger within.

Even apart from the anxiety provoked by such broader challenges, there may be problems worth airing about the future of the #JewIsraeli amalgam. Conspicuously, Fuchs and Rosner do not entertain the possibility of pitfalls arising from the enterprise of merging the civic with the religious, or of harm to both realms in the formation of an identity lacking the kind of friction and/or cross-fertilization that in a democratic society like the U.S. can yield texture and depth.

This is not to fetishize diasporic duality. After all, #IsraeliJudaism convincingly shows not only that America and Israel are populated by different kinds of Jews but that their different environments have yielded divergent kinds of Judaism and of Jewish identity. Nor can there be much question about which is the more vibrant.

A single, telling example: Israeli Jews observe Hanukkah, a relatively minor holiday, at higher rates than do American Jews, who themselves have elevated Hanukkah to a place of cultural prominence because of its proximity to Christmas. In other words, even the prototypical diaspora holiday can’t keep up with an environment that Rosner has elsewhere characterized as the cultural equivalent of “white noise that maintains a minimum of Judaism in the background at all times.”

But will this hold? As the revolutionary implications of Zionism continue to be played out in Israel, we may be witnessing only the beginning of new Jewish formations and alignments. The hope is that the JewIsraeli will continue to call on all the ancient resources of a religious tradition, and the energy of a still young country, to nourish the twin aspects of Israeli Jewish identity. The fear is that this new Judaism, traditionalist in its religion and nationalist in its politics, will have recourse neither to the literacy and wisdom of intensive religious knowledge and practice nor to the broad-based democratic commitments of a citizenship necessarily framed in secular terms.

And this is not even to mention more pressing concerns, of which, undoubtedly, the most neuralgic is the institutionalized merger of the civic with the religious that is the chief rabbinate of the state of Israel, a government office whose exercise of its authority seems to many Israeli Jews at least as detrimental to the health of their religious lives as to the comity of their national life. A satisfactory resolution to this issue has occupied, and eluded, untold numbers of minds over the decades and appears no closer now than ever.

Meanwhile, however, and in typical Israeli fashion, improvised workarounds abound in start-up institutions and practices that have successfully integrated religious practice and national identity.

Hesder yeshivas, decades-old bulwarks of religious Zionism that combine yeshiva study with army service, have been joined by new models like Ein Prat, a pre-military academy that seeks to connect young Israelis of all stripes with traditional Jewish texts. Shalem College in Jerusalem mobilizes the model of an American liberal-arts education in a curriculum bringing together canonical Western books with classics of Zionist and Jewish thought. In the summer months, Beit Tefilah Yisraeli, a Tel Aviv “spiritual” community, meets on the seafront boardwalk for Friday-evening services that meld the Psalms of the prayer book with songs from Israeli popular culture; at the dramatic point in the service of chanting the 16th-century hymn welcoming the “Sabbath bride,” some participants turn to face Jerusalem, others westward toward the Mediterranean. The absorption of religious content into popular Israeli music, a well-documented phenomenon, is reflective of this reality that is still growing into itself.

It may seem paradoxical that the effort to create a brand-new Jew should have eventuated in restoring something of the old ethno-religious coherence to the Jewish sense of self, but it is the Jewish people’s indescribable good fortune that the marvelous has actually happened. At a moment when it seems as though American Jews can’t help arguing over Israel (when they think of it at all), it is reassuring to know that, nagging problems aside, the Jewish present is bright, and the future looks good, in the place that matters most.