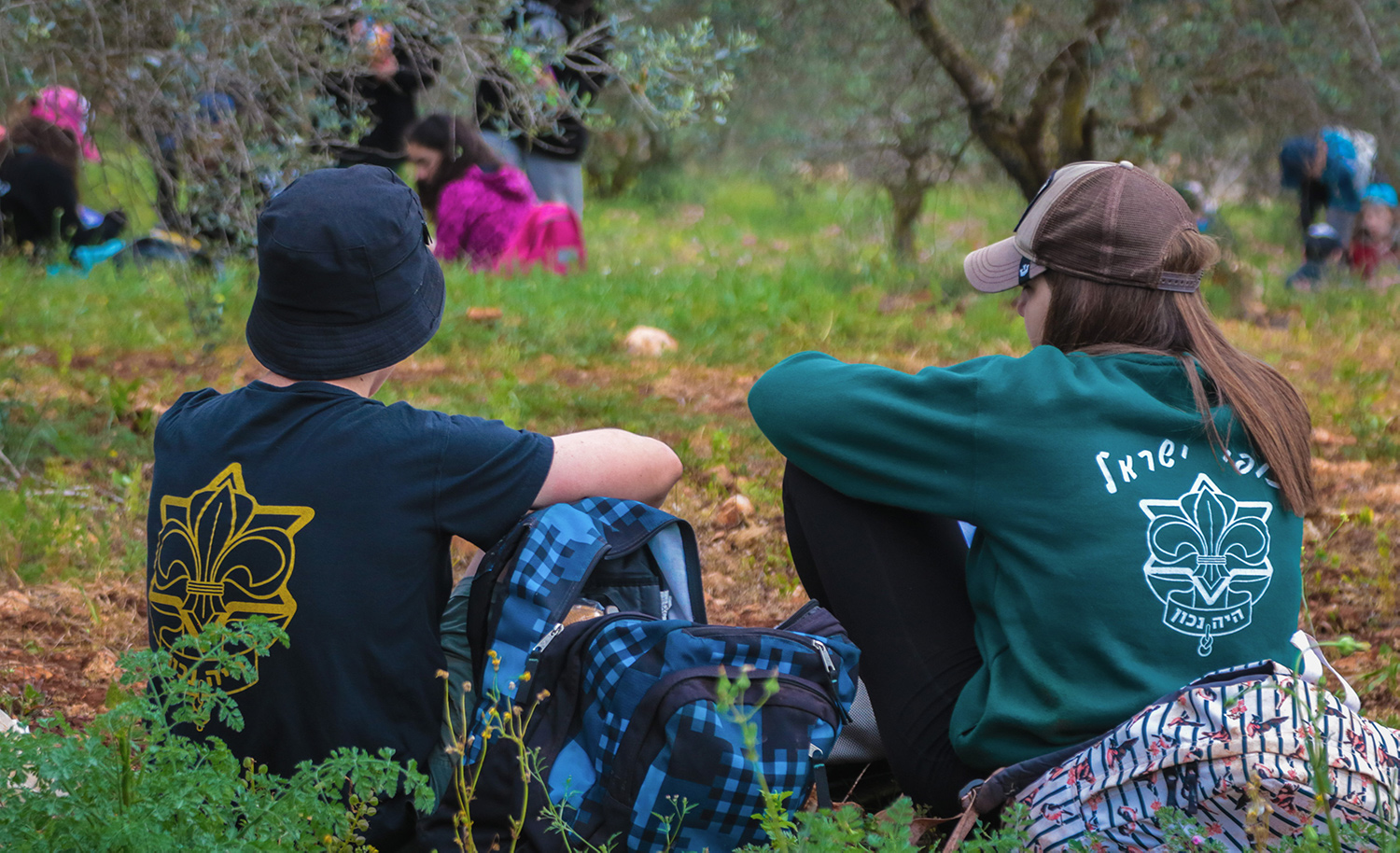 Jews around the world celebrate the spring holiday of Lag ba’Omer with bonfires, barbeques, and music. In the Jewish state, bonfire-building assumes a unique form: children are given permission to trespass on construction sites and scavenge among the debris for combustible wood and other scrap materials—activities that middle-class American parents would likely regard as grossly hazardous and a sure sign of parental irresponsibility.

Quite the contrary, argues the Israeli author Inbal Arieli in a new book: such creativity and independence in childhood have contributed significantly to the Jewish state’s success as an innovative powerhouse.

By now, studies of Israel’s stunning emergence as a hub of high-tech initiative—Dan Senor and Saul Singer’s Start-Up Nation (2009) being possibly the first such study and still the best known—are fairly common. And Israel is indeed home to the highest density of start-ups in the world, with more companies listed on the Nasdaq exchange than anywhere else but the United States. Senor and Singer offer detailed cultural reasons for that success, from the influence of an education infused with Jewish values to the habits of cooperation-plus-improvisation inculcated by almost universal service in the IDF.

For her part, Arieli, whose book is titled Chutzpah, looks elsewhere:

What I’ve come to understand is that it is the unique way Israelis are brought up, within a tribe-like community and with a childhood full of challenges and risks, that is at the root of Israelis’ entrepreneurial culture.

Arieli is well-placed to tell us about enterprising Israelis. A veteran of the IDF’s elite intelligence unit, she worked as general counsel to several start-up and high-tech companies in Israel and is now CEO of Synthesis, a leadership-assessment and -development company that uses IDF-inspired methodologies.

As for her title, which echoes Alan Dershowitz’s work of the same name—Dershowitz touts “assertiveness” as the key to Jewish survival—Arieli invokes the term “chutzpah” more broadly to signify a “determined approach to life,” an approach cultivated by parents and reinforced by institutions geared to their children’s success. The book’s sections, which roughly follow Israelis from childhood to their early twenties—i.e., the end of their military service—are labeled sequentially “Discovery,” “Validation,” “Efficiency,” “Scale and Sustainability,” and “Renewal”; by happy non-coincidence, the same stages also mark the development of a successful start-up company.

Throughout, Arieli intersperses anecdotes from Israeli tech giants with her own experiences as the mother of three. Thus, in “Discovery,” we meet Micha Kaufman, co-founder and CEO of Fiverr, an online marketplace for freelance services, who attributes his rise to his parents’ encouragement of his playfulness while growing up in Haifa. (He crafted homemade firecrackers with powder gleaned from parental cartridges.) At the playground, similarly, there are no rules or restrictions.

In general, as Arieli instructs us, parents like the elder Kaufmans prepare their children for coping later with the unpredictability of life and to embrace balagan, or messiness: an inbred feature of everyday Israeli life—from getting on a bus, to shopping at the supermarket, to dealing with government bureaucracy—that must be met with “creativity, problem-solving, and independence.”

Next, “Validation”: the stage where children first develop responsibilities. In Israel, they are charged at the age of seven or eight with such tasks as walking the family pet or making their own lunch after school. In sharp distinction to the reward-everyone approach so common in advanced Western societies, they are also encouraged to come to terms with failure.

To Arieli, the message conveyed by a popular children’s television show Zehu Zeh! (“That’s It!”), featuring a character named Yatzek who travels around Israel, falls down on every trip, and recovers before the end of each episode to say “Don’t worry, kids, Yatzek always falls and gets back up,” defined the attitude of an entire generation. That message is especially relevant for entrepreneurs, who at the analogous stage in their adult careers need to cultivate “openness to criticism, testing limits, resilience, experimentation, and maybe the most important one—tolerance of failure.”

With “Efficiency” we reach adolescence, the stage at which Israelis both experiment and learn to rely on themselves. Many teenagers take on leadership roles within the country’s youth movements, the largest of which is the Tsofim, or scouts, initially formed in pre-state Palestine to help develop the fledgling agricultural infrastructure in Jewish settlements. Today the Tsofim boast more than 85,000 campers. Like the dozens of other youth movements in Israel, they encourage young Israelis to take on great responsibilities and to operate with minimal need for adult supervision. Parents often do not know where their children are, or the names of the counselors looking after them.

In “Scale and Sustainability” Arieli argues that, like businesses, Israeli children “scale up,” in their case when they join the military in defense of their country at the same age when their American peers are busy with their college applications. The IDF stands out for its relative lack of hierarchy—rather than for their academic record, recruits are judged for their skills, capabilities, and potential; anyone can be selected for an elite unit and become responsible for soldiers older than they. In successful starts-ups, too, Arieli contends, new recruits are given immense responsibilities with little training, are often forced to learn on the job and to make decisions with very limited guidance—and can rise high.

Lastly, in “Renewal,” Arieli compares established businesses with young adults released from military service in Israel. One key difference between “long-term high performers” and those “whose time at the top is short” is the ability to adapt to changes in the surrounding environment. Israelis have formed their own means of bridging the transition from army service to civilian life, typically postponing the moment with a self-funded trip to the Far East or South America in which they hike, experience new cultures, and recalibrate: an exceptional experience ideally suited to the formation of resilient adults.

What are outside observers to learn from all of this, and how realistic is the prospect of replicating any of it? In the United States, one large obstacle is the widespread phenomenon of parental “safetyism,” as Jonathan Haidt and Greg Lukianoff call it in their Coddling of the American Mind: How Good Intentions and Bad Ideas are Setting Up a Generation for Failure. Overbearing parents provide limited opportunities for free play in childhood or the development of responsibilities in adolescence, and as a result their children grow up to be dependent and fragile adults.

Nor is this just a matter of the home or of parents. In No Child Left Alone, Abby Schachter details the growth of a “nanny state” at both the federal and the local level. Making a priority of risk-aversion, schools and government agencies penalize families of all incomes who allow their children to roam about unsupervised.

Nothing could be farther from the case in Israel. But the difference is not to be located only in Israelis’ “lax” or risk-embracing approach to parenting. A critical complement to that approach is the “tribe-like” nature of Israeli society to which Arieli herself alludes. In the Jewish state a well-established network of religious and social institutions is designed to support families. Thus, although “helicopter parenting” is indeed scarce, parents can rely on neighbors, extended family, and assorted members of the community to help raise their children. Even in times of war or rocket barrages, most Israelis go about their normal business and children continue to walk home from school alone. When circumstances become especially threatening, families all over the country take to social media to offer up their homes to those most targeted.

Yes, Israelis do welcome risk. But in a society where emergencies are managed with the help of thousands of caring strangers, parents are naturally more comfortable allowing their children a greater degree of independence. That’s hardly an argument for heedlessness as an aid in child-rearing; to the contrary, it’s a reminder that, surrounded as Israelis are by enemies committed to their destruction, with thousands of weapons pointed at major civilian centers, risk-aversion is not a choice. It’s not even a concept.

In this perennially fraught environment, the Hebrew phrase yih’yeh b’seyder, translated as “it will be OK,” encapsulates the Israeli mentality. No matter the extent of the threats faced, Israelis must somehow find a way to live; one might even say that the entire history of the Jewish state is a story of improvisation under extreme pressure.

In this sense, ironically, a reading of Chutzpah helps thoroughly to negate its author’s claim that the Israeli model is replicable if only one would take the trouble to unveil one’s “own chutzpah.” Arieli gives us beautiful details of the most intricate Israeli rituals, from the children’s book series Hasamba, which follows a tight-knit group of crime-fighting friends, to the art of personalizing one’s military equipment (the helmet, the vest, the weapon). In so doing, however, she brings vividly to life the irreducible particularity of Israeli society, an exceptionalism that cannot be recreated.

To be sure, non-Israeli parents can always encourage their kids to play outdoors or join the Scouts. But this alone is not enough to make a desert bloom. Just as “chutzpah” has no meaningful English translation, it also lacks a formula. Israeli life owes its exceptionalism to a multitude of factors, some of the most salient of which, for obvious reasons, most people in the West would not wish to see replicated anywhere in their vicinity.