I was reproached for questioning whether Jews should be creating new communities in places from which they were cleansed. Let me explain. 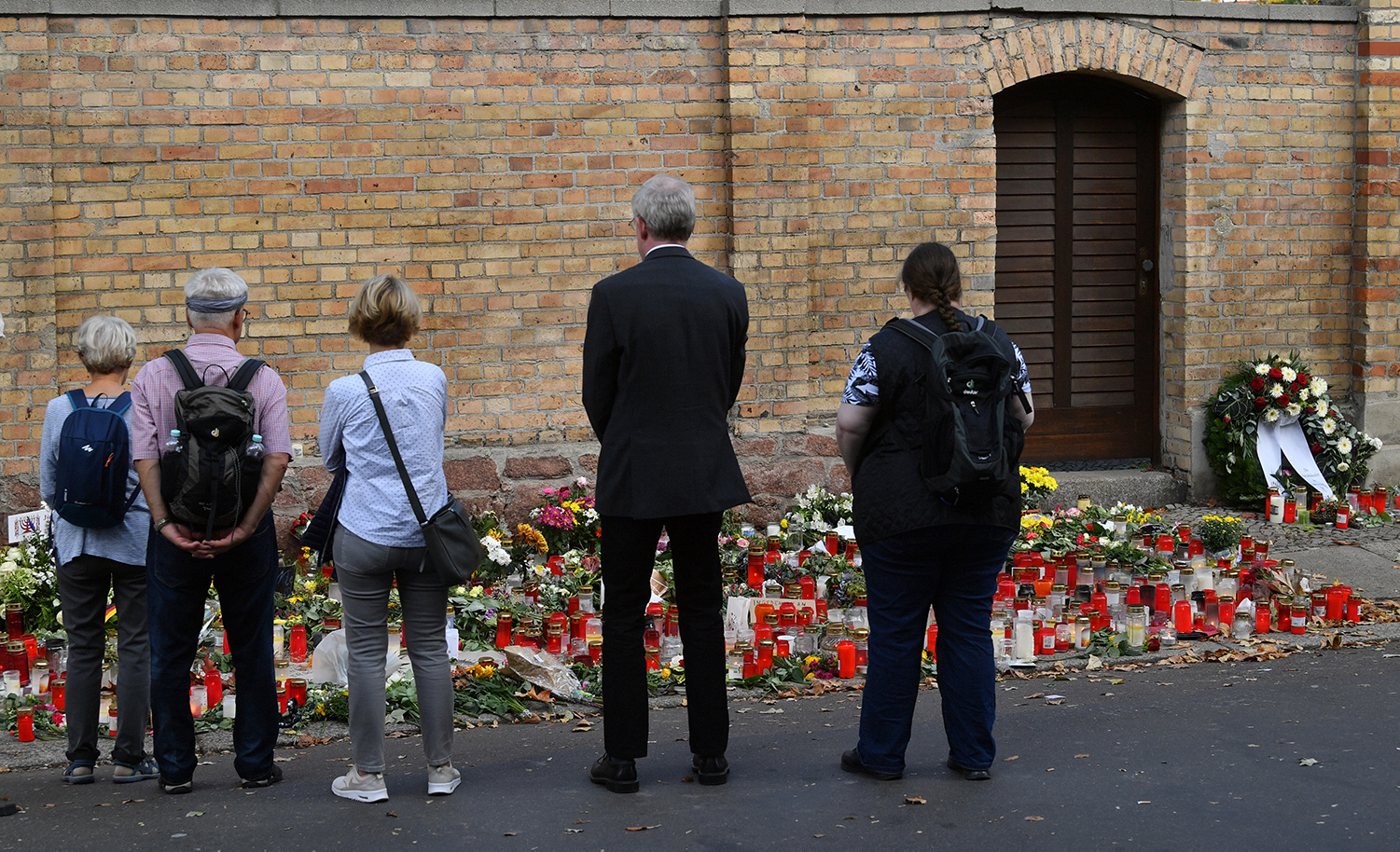 People standing in front of candles and flowers at the synagogue in Halle, Germany after a right-wing extremist attack on October 9, 2019. Photo by Hendrik Schmidt via Getty Images.

Observation
Yaacov Lozowick
About the author

Yaacov Lozowick served as director of archives at Yad Vashem and chief archivist at the Israel State Archives. He now teaches at Bar-Ilan University.

A few months ago, shortly after an attempted attack on his synagogue, the head of the Jewish community in the German city of Halle wondered publicly about the future of Jews there. His comments led me to question, on Twitter, whether it was worthwhile for Jews to continue living in the city in the first place. After receiving numerous replies scolding me for effectively aligning with anti-Semites—who also wish to rid Halle of its Jews—it occurred to me I had stumbled onto a knotty topic worthy of disentangling. I also realized that, having lived in Israel for five decades, I had a perspective quite different from that of both Germans and Diaspora Jewry. The latter two would wish for the Jews to stay; as for me, I’m ambivalent.

Admittedly, much has changed for German Jewry, and today many Germans would be deeply offended by any suggestion that there could be a problem with Jews living in their country. For them, a flourishing Jewish community is proof they’ve cured their society; a threatened Jewish community would be a sign the old demons are still there.

Something similar has happened elsewhere in Western Europe as well. One can criticize French politicians for their weak responses to anti-Semitic violence. But when then-Prime Minister Manuel Valls said in January 2015 that “if 100,000 Jews leave, France will no longer be France,” he really meant it. The many French citizens who wish to live in an open, free society agree. Europe’s Jews, by and large, view their countries as their homes—their natural and rightful place—and are committed to preserving their communities. Most European Gentiles want Jews to continue living in their midst. Therefore, an Israeli doubting any of this obviously doesn’t get it.

Yet some of us do get it. Let’s look, then, at the curious case of the Israelis, and their distinctive understanding of the world, starting at the beginning.

Theodor Herzl and many other early leaders of Zionism were secular, Europeanized Jews who had tried to join Gentile society as equals but had ruefully come to realize they’d never succeed. Russian Zionists like Ahad Ha’am, who had never made such an attempt in the first place, embraced a return to the Jewish homeland precisely because they saw the failure of their Western cousins. These first few generations of Zionists thought they were striving toward normality. Remove the Jews from among their enemies, set them in a place where they could function in a society of their own, and they’d become regular people. As for what Zionism’s founding fathers thought about the Jews who instead insisted on staying put, embedded in the Zionist ideology was a strongly implied criticism of the latter’s short-sightedness and denial.

In the decades before Zionism succeeded, this intra-Jewish squabble was marginal and hypothetical. But then, in what in historical terms was the blink of an eye, came the Shoah, the creation of Israel, the mass exodus of both the remnants of European Jewry and almost all of Middle Eastern Jewry, and the disappearance of Soviet Jews behind the Iron Curtain. The Diaspora had proved lethal, and Zionism was vindicated.

As entire Jewish communities poured into Israel, Israelis could have been forgiven for expecting the end of the exile to be near. The only exception was America, and some expected that would change someday, too. For a few brief years after the 1967 Six-Day War, there were even signs it might.

Then came the Yom Kippur War, and Israeli self-confidence took a serious blow. Dozens of African nations severed diplomatic relations. The partially opened gates of the Soviet Union slammed shut. Runaway inflation shook Israel’s economy. The Zionist miracle lost some of its luster. In some years there were more Israelis leaving the country than Jews from abroad arriving. A final ingathering of all exiles wasn’t happening.

Meanwhile, Israelis told themselves they were growing up, leaving behind the exuberance of youth. Part of this maturation involved positively re-evaluating their relationship with non-Israeli Jews and Jewish communities, to the extent that the very terminology changed. The word for Jewry outside Israel was no longer galut, exile, with all of its negative resonances, but t’futsot, Diaspora (literally, “dispersions”).

The change was permanent; even among themselves, Israelis stopped talking about the Diaspora in the old way. How, then, did they understand the Jewish world as the 20th century neared its close? Perhaps as something akin to the state of things in the talmudic era, between the 1st and 5th centuries CE, when Babylonia and Roman Palestine served as competing and complementary centers of Jewish spiritual and demographic life. Except that ancient Babylonia had eventually replaced the conquered and destroyed Jerusalem. This time, perhaps Jerusalem would not only endure but eventually even replace the new Babylonia in some future century. A positive sign was that, in the mid-1970s, the number of Jews in Israel surpassed the number of Jews in New York City.

Then that end-of-the-20th-century paradigm faded as well. In Israel, both the pioneer ethos and the kibbutzim disappeared. The country opened to the world, but not in a way anyone had foreseen.

Today, Israeli cultural creativity is exploding. The annual number of books published per capita is sky-high by international standards. The territory of Jewish-related scholarship and literature has greatly expanded. Israeli filmmaking is thriving; Israeli television series are adapted for American audiences. Perhaps most exciting of all is popular music, where religious and secular, Western and Arabic styles are all being mixed into something new and startling, some of it quite profound.

There are more students in Israeli religious institutions of learning than at any time in history, and their diversity is growing. And as for the Ḥaredim (“ultra-Orthodox”), although they continue to have strong communities in America, their best yeshivas are in Israel.

All in all, a strong argument can be made that Jewish creativity, in a Jewish context, is now broader and deeper than at any time since the end of the talmudic era—and, what’s more, it’s all happening in Hebrew. Israel, as Ahad Ha’am had hoped, has become the undisputed center of Jewish, spiritual, intellectual, and cultural life. The building of the Jewish state has turned out to be an epochal success.

For all of these reasons, world Jewry has an ever-diminishing effect on Israelis, who spend ever less time thinking about it (for better or for worse, and it may be for worse). One simple marker is the swarms of young Israelis who escape the country for several months or a year after their military service, to see the world and calm their nerves. They don’t go to Europe or the United States. They go to the more rugged parts of South America or the exotic parts of Asia. Places like Thailand, Vietnam, and Laos, with no Jews and no Jewish history, have become central to how Israelis see the world.

Sixty years ago, Israelis thought the arc of history was bringing the Jews home to Zion. Today they’re more likely to think Jewish history simply is what they themselves are living and the rest, as the saying goes, is commentary. Jews who wish to join are welcome; the others will increasingly be on the margins.

And yet, and yet. Despite everything, Israelis have by no means grown indifferent to their brethren in dispersion. Raucously and notoriously argumentative though they may be, they also share some generally accepted, bedrock ideas. One of those ideas is the significance of world Jewry.

That’s not to say opinions don’t vary widely on the nature and extent of that significance. But it’s a simple fact that, over the decades, Israel has invested large-scale efforts, most of them unheralded, in extracting Jews from countries where they’re endangered—from Iraq, Syria, and Iran, from Ethiopia and from Communist Romania and beyond. And there’s always been broad support for these actions, stemming from a deep-seated consensus that Jews are one nation, connected by bonds of mutual responsibility, wherever they live and whatever style of Judaism they practice.

When it comes to American Jewry, we Israelis wish it well, and want to preserve good relations with it even if its fate isn’t high on our list of concerns. Notwithstanding the spate of violence against Orthodox Jews in Brooklyn, the two synagogue shootings of the past year, and the recent homicidal attack in Jersey City, the U.S. has no real history of violent anti-Semitism. These events, unsettling as they are, are not about to spark a mass aliyah of American Jews. Whatever the medium or long-term fortunes of the American Jewish community, it’s not going to need rescuing, or special support. But, by the same token, neither its flourishing nor (heaven forbid) its disappearance would say much about the historical claims of Zionism and their vindication.

Europe, however, is different. The basic and fundamental motivation for Zionism’s creation was pessimism about the future of European Jewry. That pessimism can wax or wane, but it isn’t likely to vanish, and certainly not today when anti-Semitism has raised its vicious head all over the Continent.

From World War II until 1989, there were no Jewish communities in Halle or any other East German cities. Is there a compelling reason for them to sprout now? Halle’s primary claim to fame is that it is the birthplace of the composer George Frideric Handel. Its second-most-famous native son was Reinhard Heydrich, Heinrich Himmler’s deputy who organized both Kristallnacht and the mass shootings of some 1.3 million Soviet Jews. After Heydrich’s assassination in 1942 by the Czech and Slovak resistance, the Nazis named in his honor a plan to murder another two-million Jews.

There’s no need for any Jews to be in Halle, or in any of the other Halle-like places in today’s Europe.

More about: Diaspora, Israel & Zionism, Israel and the Diaspora