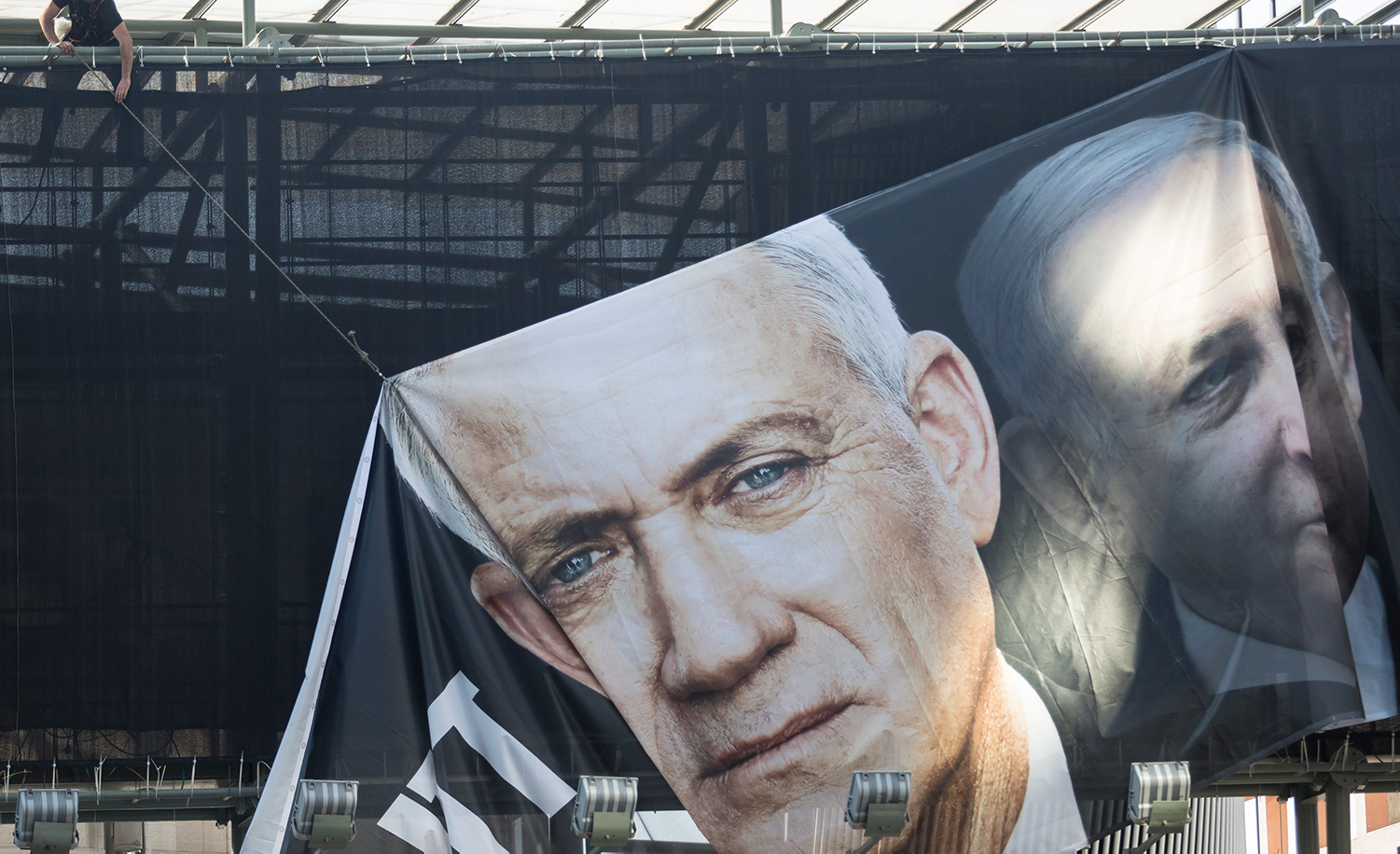 Here we go again. The votes are fully counted, and it’s clear that Israel’s March 2 election, its third in less than a year, has once more failed to produce a path to a viable government.

For a moment, it seemed that this wouldn’t happen again. Prime Minister Benjamin Netanyahu’s Likud party won a plurality of 36 seats in the 120-member Knesset, up from 32 in the previous round, while the opposition Blue and White party, led by Benny Gantz, remained at 33, the same as last time. Thus, on election night, Netanyahu and his partisans celebrated what they thought was an unexpected success.

The ebullience wore off the next morning. In the light of day, it emerged that Netanyahu and his coalition partners remained three seats short of the 61 needed to form a threadbare majority in the Knesset. So despite the change in the parties’ vote share, in functional terms the result has been no different from last September and the previous April. Israel’s electoral stalemate continues.

What happens next? Many prognosticators and indeed some political parties themselves have imagined a government created by an “anti-Bibi” bloc in the Knesset composed of Blue and White plus all of the Jewish anti-Netanyahu parties plus the Joint List Arab party, which won fifteen seats in its best-ever showing. This would add up to 62 seats: a majority.

But not so fast. That anti-Bibi coalition is a coalition imaginable only in the fevered speculation of a pundit, not in real life. It would have to hold together both the ultra-nationalist right-wing Yisrael Beytenu party and the Arab Joint List, whose leader, Ahmed Tibi, has called Avigdor Liberman, Yisrael Beytenu’s leader, “a racist and a fascist.” Liberman, for his part, has charged that Tibi sympathizes with terrorists and should be deported.

True, Liberman desperately wants to take down Netanyahu, whom he sees as corrupt and as too beholden to the ultra-Orthodox. But forging a pact with the Joint List would destroy Liberman himself. The animus between the two parties is simply too intense; despite attempts to reconcile them, they could not and will never sit in a government together. Without both of them, Gantz has no hope of forming a coalition that approaches the size of Netanyahu’s.

So, for now, both Netanyahu and Gantz are proceeding on other lines. One Likud activist told me that Netanyahu will try to gather defectors from Gantz’s bloc, possibly even from the now much-diminished and farther-left Labor party. Gantz, meanwhile, is attempting to get legislation passed that would disallow someone who has been charged with corruption—that is, someone named Benjamin Netanyahu—from serving as prime minister. Gantz and his supporters also entertain the hope that the judiciary will somehow swoop in to rescue them by summarily removing Netanyahu from office.

All sides concede that a fourth election is possible.

The prospect of a fourth election, and the ongoing political paralysis certain to be entailed in the runup to it, should fill Israelis with dread. Their country is surrounded by threats, ranging from the same old geopolitical ones to newer ones like the coronavirus. It requires the stability and legislative legitimacy that an operating government provides. Besides, there’s no indication that a fourth election would resolve what the first three have failed to resolve. The nation faces a political crisis that demands fresh thinking, creativity, and, most of all, an immediate solution.

Luckily, one such solution exists: a simple one, though one that has scarcely ever been tried in Israel. President Reuven Rivlin, who, as head of the Israeli state, presides over the process of government formation, could instruct the largest coalition of parties that are willingly sitting together to form a minority government—that is, a government led by a party or a coalition of parties possessing less than an absolute parliamentary majority but making up a clear parliamentary plurality. That way, even if no party has succeeded in forming the traditional majority coalition of 61 seats, new elections would not be necessary.

Americans, who live in a presidential democracy, may not be familiar with the concept of a minority government. But such governments are normal in other parliamentary democracies like Israel’s. (Israelis themselves are more likely to have heard of the idea, but sometimes become too trapped in their own history and procedures to look elsewhere.) Such governments appear fairly often in Canada and the United Kingdom. At this very moment, Canada’s prime minister Justin Trudeau leads a minority government, and recently in the UK Theresa May and Boris Johnson have led minority governments as well.

How do they work? A prime minister in a minority government has the same executive authority as in a majority government. He or she leads the cabinet, makes decisions on matters of war and peace, and, along with his or her parliamentary coalition, proposes legislation and bills to the parliament. Ministers are nominated only from the governing party and its coalition.

True, since the government lacks a majority, the passage of legislation tends to occur in a more tentative fashion than usual. Proposals require outside support from opposition or non-ruling parties, or if not then at least their abstention from voting. Also, though this move is a politically risky one, the parties out of government can always join together to propose a vote of no-confidence, which, if it passes, will dissolve parliament and force new elections.

For this reason and others, minority governments are typically seen as unstable, and they almost always rule for briefer periods of time than do majority-based ones. The previous minority government in Canada lasted for fewer than three years; May’s government (and then Johnson’s first government) similarly lasted only two-and-half years.

But Israeli politics is a notoriously different beast; there, three years is not too different from the normal shelf-life of a majority government. Moreover, Israel’s experience with minority governments is extremely limited. A couple of times in the 1990s, one or more partners withdrew from the majority coalition and thereby turned it into a minority; the country has never had a minority government created directly after an election.

Still, there is nothing in Israeli law that bars a minority government from forming, and indeed there’s never been much resistance to the idea. It’s just that, until now, majority coalitions could always be successfully cobbled together, so the idea has never been tried.

The ultimate decision lies with Rivlin, who may not bite. But if enough Israelis find the idea acceptable, he might. If he does, who would lead the country?

During the electoral campaign, none other than Benny Gantz himself speculated about the possibility of a minority government. In fact, if news reports are to be believed, he’s trying to put one together right now. But though he might conceivably be given a chance to form a government, the math looks impossible for him. The ultra-Orthodox parties, which together earned sixteen seats, would refuse to sit both with his Blue and White junior partner, the secularist Yair Lapid, and with Avigdor Liberman’s Yisrael Beytenu. Likewise, as mentioned above, any attempt by Gantz to form a minority government with outside support from the Arab Joint List would be fraught with danger and could very well lead to the break-up of his own party. So, even though Gantz is currently making more noise about the possibility of a minority government, a coalition led by Netanyahu, as commander of what is almost certainly the largest of the possible minority coalitions, appears much likelier.

There are good things about minority governments. Legislation under them is typically less ambitious and tends to offer something for everyone. Under his current minority coalition, for instance, Justin Trudeau knows he can propose a budget with a middle-class tax cut, daring the Conservative opposition to make his day by denouncing it. He knows, too, that for now he can pass environmental policies disliked by the Conservatives because they can’t risk to be seen calling for another election a year after losing one. But he also knows that he’s limited: if he tries something radical, his opponents will be less hesitant to trigger new elections and he—not they—will be punished at the polls.

Such an arrangement could work out well in the Israeli context. Granted, some pieces of more controversial legislation that Netanyahu and his allies might wish to propose would be instant non-starters. There would be no hope, for instance, of mustering a majority for a law granting legislators (like himself) immunity from corruption charges (like the ones that he’s currently facing). Controversial subsidies for ultra-Orthodox religious groups would likewise court trouble; Gantz’s party would never allow them.

Minority governments are thus not a panacea. They are weaker than majorities; they don’t last; and they complicate the business of parliamentary government. But at least they allow that business to take place and thereby produce a record of accomplishments and failures for voters to judge when the government falls after a couple of years.

As I’ve argued elsewhere, Israel’s current crisis demonstrates the need for systemic reform of the country’s political and electoral framework of proportional representation. That system is clearly broken. But, first, Israel needs a government. At the very least, the clumsiness of a minority government would have the satisfyingly symbolic benefit of reflecting the very political deadlock and lack of consensus that prompted its formation, and thereby of best capturing the will of the Israeli people, who can’t quite make up their minds.