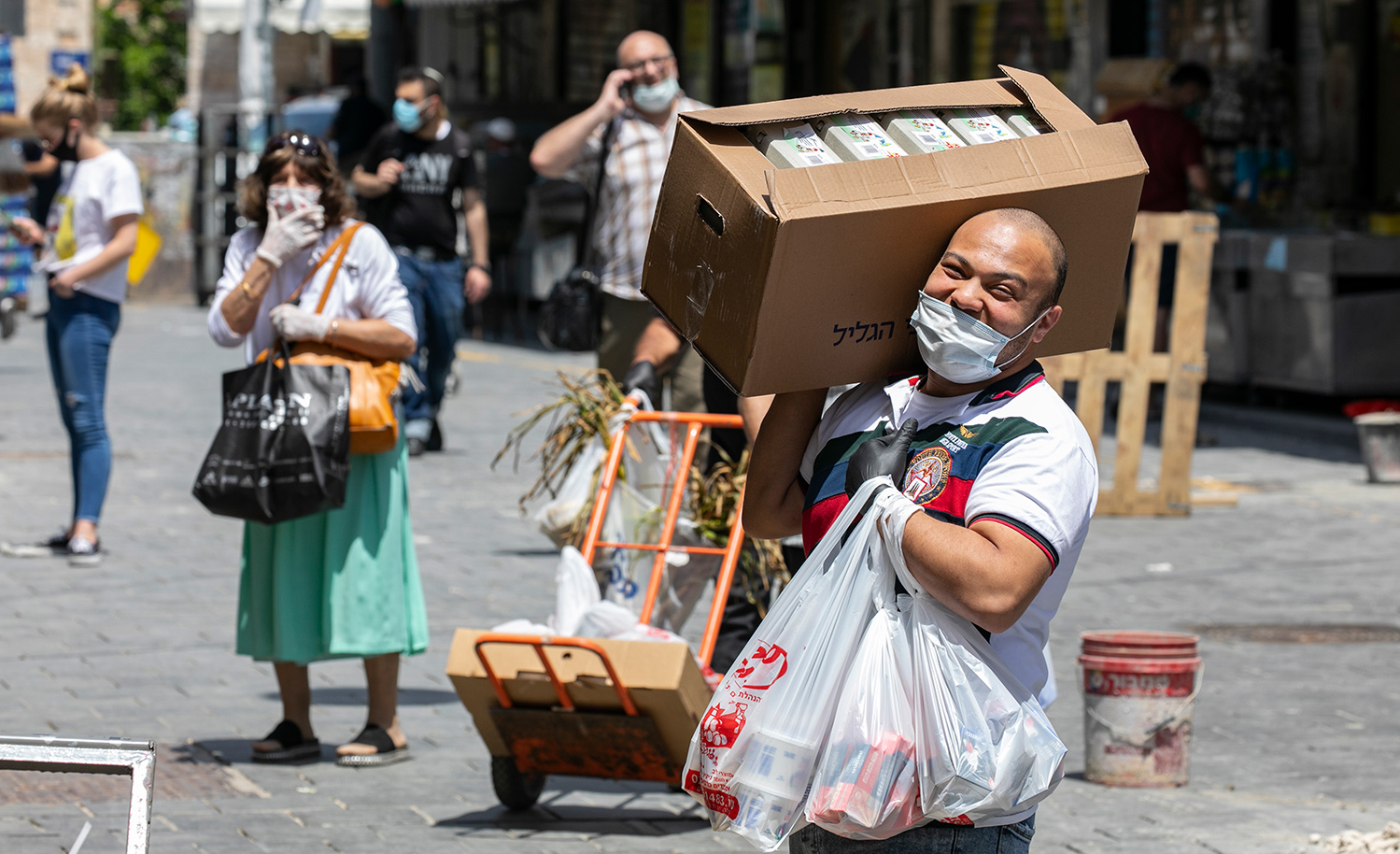 Passengers at the central bus station in Jerusalem on April 20, 2020. Olivier Fitoussi/Flash90.

Any viewer of Israeli television with a better knowledge of Hebrew than of Israeli popular culture might have been puzzled by an expression encountered frequently these past weeks. Not a few Israelis, interviewed about the coronavirus by roving reporters in the street, have answered by saying, “Avarnu et par’o, na’avor gam et zeh”—which translates as, “We made it past Pharaoh, we’ll make it past this.” Sometimes this has been shortened to just “We made it past Pharaoh.”

Was this because of the Passover season? It would be nice to think that Israelis live the story of the exodus so intensely at Passover time that even COVID-19 has made them think of it. The truth, however, lies mostly elsewhere.

The phrase avarnu et par’o, na’avor gam et zeh comes from a song written and first recorded in 1990 by the Israeli pop singer Meir Ariel (1942-1999). It’s the refrain in each of the song’s stanzas, which Ariel sang in different versions on different occasions. The words of the first stanza, though, were always the same. In my free translation, they are:

The income-tax man impounded my car,
The VAT people took my guitar.
The electric company shut down my power,
The waterworks have turned off my shower.
It’s driving me nuts, all this craziness,
But we made it past Pharaoh, we’ll make it past this.

Musically, “We Made It Past Pharaoh” was nothing to write home about. Ariel had a good but not exceptional voice, and as a guitarist he was a plunker who did little more than strum chords. In this respect, he never developed much from the man I remember from the mid-1970s, when he and I served for several years in the same army reserve-infantry unit.

In fact, we were not only in the same unit, we were in the same four-man anti-tank gun crew, which had a server, a loader, a gunner, and a commander. Every year we trained together for two weeks at a base in the Negev, and every year Meir brought his guitar and plunked away on it while we sat around in the evening drinking coffee made over a camping stove and gabbing about whatever we gabbed about.

Meir never talked about himself on those occasions, and I had no idea at the time that he was a known figure on the local musical scene. To me, he was just a fellow reservist with a head full of curls, a big grin, a quiet, almost shy manner, and a guitar. I found out only later that he was already being referred to then as “the singing paratrooper,” having previously served in the famed 55th Paratrooper Brigade that took the Old City of Jerusalem in the 1967 war and fought heroically at the Suez Canal in 1973.

His first song to gain acclaim, “Jerusalem of Iron,” was an ironic restatement of Naomi Shemer’s immensely popular “Jerusalem of Gold,” to whose melody it was sung. In place of lines like Shemer’s “As pure as wine, your air of mountains/ And your pine trees’ smells/ Are carried on the evening’s breezes/ With the chime of bells,” Ariel sang, “The brigade, under fire,/ Advanced in blood and smoke,/ And with it, mother after mother,/ Put on a widow’s cloak.”

After our anti-tank unit was dissolved, its 90mm cannon having been superseded by the more deadly TOW missile, I never saw Meir again. Most of what I know about his subsequent life and career, which were ended by an early death, came from reading Yossi Klein Halevi’s well-received book Like Dreamers, in which Meir was one of four 55th Brigade veterans whose story was followed as it unfolded in later years. You can also listen to Yossi Klein Halevi talk about Meir in this recent podcast on the transformation of Israeli music.

To the best of my memory, I never even heard any of Meir’s songs until “We Made It Past Pharaoh” came along. Its second stanza, in most versions, went:

I lost a million shekels in a computer game.
My bank account was swallowed by an ATM.
An electronic judge took my license away.
I put a coin in my lawyer—he said, “I’m out of order today.”
His digital secretary blew me a kiss.
We made it past Pharaoh, we’ll make it past this.

“We Made It Past Pharaoh” was an immediate hit. It juxtaposed a religious allusion deeply embedded in the Jewish psyche with a humorous contemporaneity. The period in which it was written was one in which computers, credit cards, video games, and digital systems of all kinds were just coming into use—this happened slightly later in Israel than in the United States—and the song was a bemused reaction to all of this and to the sense of helplessness induced by it.

It looks like I’m stuck with this whole modern scam.
To tell you the truth, I don’t give a damn.
There’s no longer a thing that matters to me;
The fact is that I’ve even stopped watching TV.
If a revolution breaks out, it’s news that I’ll miss.
But we made it past Pharaoh, we’ll make it past this.

Comically juxtaposed by the song, too, were the national symbolism of the triumph over Pharaoh and the bewildered plight of a single disaffected individual in a late 20th century that was too much to cope with. This is, I think, what made “We Made It Past Pharaoh” speak to Israelis so strongly. It told them that the sense of disconnectedness to society that was a consequence of modern bureaucracy and technology could be overcome, or at least combated, by a sense of connectedness to something even stronger: the unbroken history of one’s people and an identification with it. I am being driven crazy by what’s happening to the world around me; we made it past Pharaoh and we’ll make it past this.

Indeed, whether or not he was aware of the source of his refrain, Ariel was tapping into traditional Jewish humor when he resorted to it. As has been pointed out by Ruvik Rosenthal, an expert in the Hebrew language and slang, the expression originally comes from a joke found in Der Jüdische Witz, a German-language collection of Jewish humor compiled by the Yiddish scholar Salcia Landmann. In it, a well-off Polish Jew complains to his wife that when the messiah comes, they’ll have to part with their comfortable life and all of their belongings and move with millions of other Jews to Palestine. To which she replies: “Nisht geferlikh! Mir zenen baygekumen dem Paro, mir veln oykh baygekumen dos”—”Don’t worry! We made it past Pharaoh; we’ll make it past this.”

What makes this joke so funny, of course, is that the wife, having heard her husband’s description of the messianic age, pictures it as a disaster comparable to the house of bondage in Egypt. But this also has its Jewish antecedents. In the tractate of Sanhedrin, the talmudic sage Ula is quoted as saying of the messiah yeyti v’lo iḥminey, “He can come—I just don’t want to see him.” Ula was referring, the Talmud explains, to the travails that, according to legend, would precede the messiah’s arrival.

And we’ll make it, Israelis have been saying, past COVID-19. “It would seem,” writes Rosenthal,

that Meir Ariel’s “We Made It Past Pharaoh” has become our coronavirus hymn. It’s been popping up everywhere: in newspaper headlines, in radio programs, in comedy skits, in talk shows, even in religious ceremonies. The proximity of the corona epidemic to the Passover holiday is part of it.

But only part. A Jewish sense of humor combined with a spirit of national resilience will get us through the rest of the year, too.