What Aliyah Looks Like (for My Family at Least) in 2020

Even while we currently adhere to responsible social distancing, the sheer wonder of acculturating into life in the Jewish state is far from wearing-off. 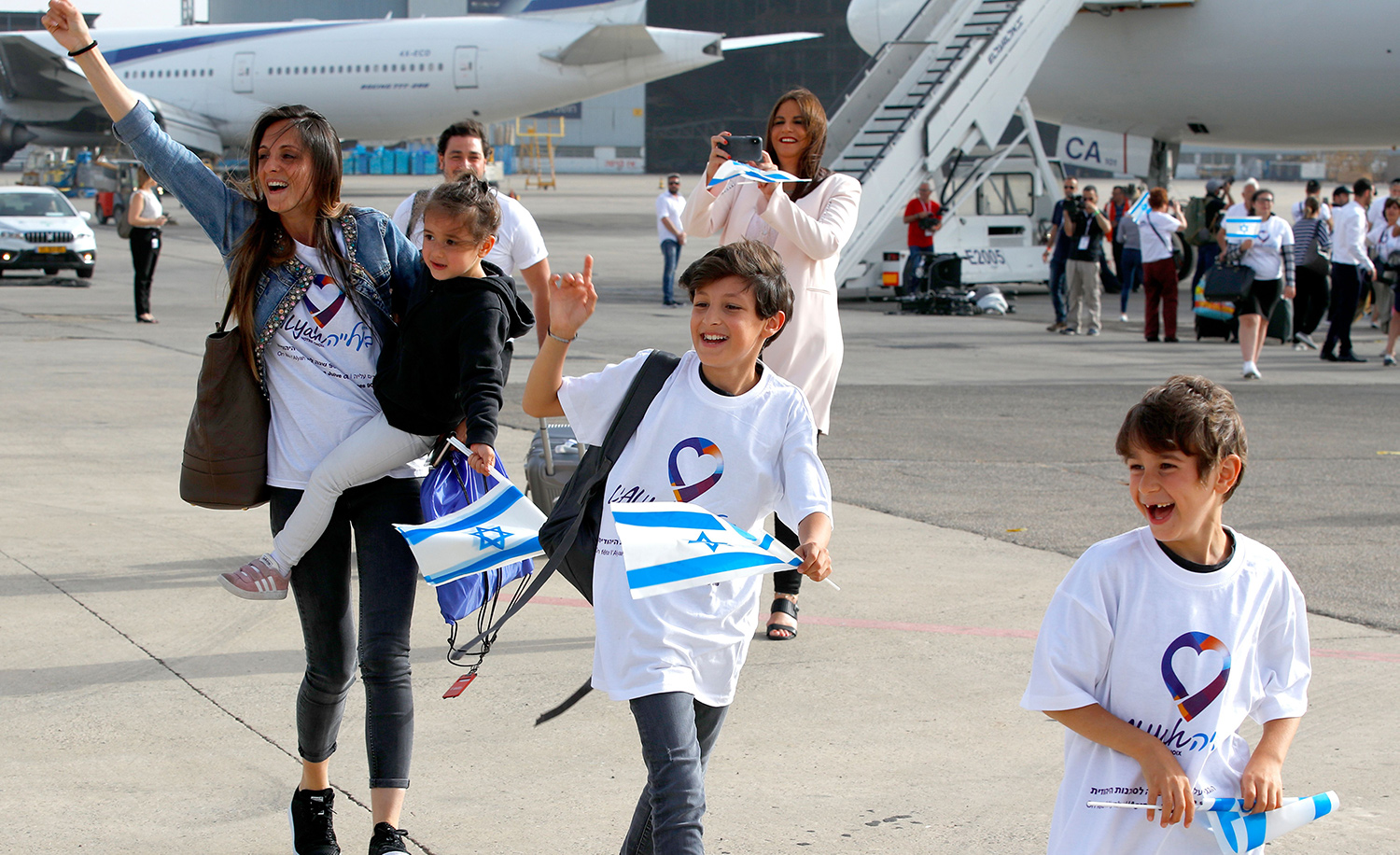 In 2012 the state of Israel established a new holiday called “Yom Aliyah” (immigration day) to celebrate the ingathering of Jewish exiles and the contributions of these immigrants to Israeli society. Yom Aliyah takes place on the tenth day of the Hebrew month of Nisan: the biblical date on which Joshua led the Jewish people across the Jordan River and into the Land of Israel. (This year, it falls on April 5.) Since this date is just a few days before Passover, when Israeli schools are usually closed for the holiday vacation, Aliyah Day is also celebrated in the fall on the seventh day of Ḥeshvan, on which, according to tradition, God first told Abraham to enter the promised land.

Aliyah, which literally means “ascent,” derives from the Hebrew Bible, appearing first when Joseph tells Pharaoh that he wishes to “go up” (e’eleh) to the land of Canaan to bury his father Jacob (Genesis 50:5-6). In a later verse, Joseph, his family, and the rest of the funeral procession are described as olim, those who go up (singular, oleh)—the form of the word that in modern Hebrew means an immigrant to the Jewish state.

The word’s origin appears to lie in the fact that the Land of Israel, with its hills and mountains, is at a higher altitude than Egypt. But the term has long had moral as well as topographical connotations. The Talmud states that “the Land of Israel is higher than any other land,” citing a prophecy by Jeremiah (23:7-8) that God will bring the Israelites “up” to their homeland from the lands to which they have been exiled. Although the rabbis may have meant “higher” literally, it’s hard to understand the statement as about anything other than the land’s inherent sanctity. Notably, the very last word of 2Chronicles, the final book of the Hebrew Bible, is vaya’al, “let him go up”—said by King Cyrus of Persia to whoever among the exiles wished to return to the Land of Israel.

It’s interesting that, in the realm of Jewish metaphors, the quest for moral rectitude is termed t’shuvah, return, while the return to the ancestral homeland is an ascent, an activity suggesting strain or even discomfort—heavy lifting, in short.

I’ve been reflecting on all of this because the upcoming Yom Aliyah will be the first since I relocated to Israel with my family.

Motivated mostly by lofty Zionist aspirations, as well as some practical ones, my husband and I had long considered making the move. But our plans crystallized only a couple of years ago. During our year-long period of pre-immigration planning and logistics, moreover, it became clear that my husband and I were of two minds.

He had grown up in a traditional Jewish family in Portland, Oregon, one of only a handful of Jews in his public-school classes. He longed for a more holistic Jewish life in which he would no longer feel at odds with his surrounding culture. For my part, I’d been raised in a strongly religious and Zionist family in Monsey, a town located some 35 miles north of New York City whose population consists almost entirely of Orthodox Jews. By the time I reached adulthood, I had had years of Hebrew-language instruction and trips to Israel under my belt.

In addition, although Israel occupied a prominent place in my religious and political worldview, I had grown up in what may be the closest thing to a holistic Jewish community that exists in America. Our grocery stores, hardware stores, clothing stores, and (eventually) even malls were established by, and primarily for, religious Jews. The commuter bus to Manhattan hosted and still hosts a daily minyan. Finally, I have spent much of my professional life teaching at Jewish schools and later in an ultra-Orthodox college. Even as Israel’s religious and cultural vitality exercised a strong appeal, I felt at home in and inspired by a country that made it possible to live a fully Jewish life while taking part in so many aspects of the American dream.

For me, then, part of the strain of making the ascent to Israel came from leaving behind something entirely comfortable. But that wasn’t the only complication; others no less disorienting lay in wait.

The discomfitures of North American Jews undertaking aliyah today are very different from those faced by previous and larger waves of immigrants, whether they were fleeing pogroms, had been orphaned by the Holocaust, or were seeking to fulfill the dreams of their ancestors in Ethiopia. Likewise, the pioneers of yore were greeted by barren desert and malarial swamps, while the early survivors of the Holocaust arrived in a nascent country about to be overrun by its enemies. By contrast, today’s olim find a modern and prosperous society.

This latter dynamic played itself out most obviously on our flight to Israel on a plane chartered by Nefesh B’Nefesh, an organization that assists U.S. and Canadian Jews in resettling in Israel. On the Dreamliner whisking us to Ben-Gurion airport, we were accompanied by some 200 other olim. Our relatively smooth processing through immigration officialdom took place in the VIP section of the terminal, where we were feted with fruit platters, sandwiches, and a high-end espresso machine. In case the makeshift play area set up by Nefesh’ B’Nefesh wasn’t sufficiently entertaining, each of my five children was personally assigned an Israeli national-service volunteer to ply him or her with candy and small toys.

Pictures of past immigrations decorated the processing room. One displayed an overcrowded aircraft—one of the last to make it out of Addis Ababa—with the seats removed, filled with crouching yet beaming Ethiopian Jews. As I sipped my latte, I wondered if our luxury homecoming could ever approximate the joy and wonder shared by those new immigrants as they arrived in a totally new world.

As with most olim, our first few weeks in Israel were marked by whirlwind visits to government offices and the business of setting up bank accounts, registering our children for schools, and so forth. Nothing in America quite prepares you for Israel’s particular brand of red tape, and it’s easy to hear new immigrants complaining about the process.

Still, if you catch an oleh at a moment of honesty, he or she will admit that, despite the various bureaucratic hoops we all jump through, the practical aspects of immigration aren’t onerous enough to be discouraging; if anything, they impart a sense of having worked for the privilege of living in the Promised Land. It doesn’t take long for these technical hassles to fade into the background and even to realize that many aspects of everyday life in modern Israel are in fact relatively efficient and functional.

The real difficulties with aliyah, those you don’t hear people talking about, are more subtle and personal. A case in point is our recent experience of being confined to home by the Israeli government lockdown during the coronavirus pandemic. We’d been looking forward to our first Purim in Israel, eagerly anticipating a citywide parade and other public festivities that have no analogue in America. My mother was also planning a long-awaited visit, a trip canceled along with most public Purim celebrations.

Perhaps irrationally, given our current instructions to avoid contact between parents and grandparents, this has left me feeling very far away from home. And it thereby touches, for me, on another complication: my political and philosophical conservatism.

That may sound odd in light of the fact that, despite its socialist roots, the modern state of Israel has become a conservative cause célèbre. My own commitment to Zionism stems from all the same worldly reasons that impel American conservatives to support Israel, compounded in my case by a deep sense of the religious significance of the land itself. And yet, by temperament, conservatives are wary of sudden upheavals. Aliyah involves uprooting oneself from much of one’s family, abnegating at least some responsibilities toward one’s parents, and abandoning one’s community in favor of the dream of joining an abstraction, albeit one larger and far more dynamic.

All of this has contributed to the feeling of aloneness induced by the coronavirus lockdown. In Teaneck, however physically separated we’d be from our neighbors in the close-knit Orthodox community, we’d always be sure that someone was looking out for us.

But that’s not quite right, either. The truth is that we now have an entire country on our side. We were reminded of this, and of the difference between Israel and the U.S., or most other countries, by videos of the planeloads of cheering Israeli backpackers recently airlifted home on special emergency flights from South America and elsewhere.

Few governments have gone to such lengths to retrieve their citizens during this pandemic, including those bringing contagion with them. For us, true social cohesion in America more or less ended at the borders of our Orthodox community. In Israel, the line between nation and community is much more porous, allowing us to experience firsthand that ambient sense of security that we always knew helped Israel thrive even in times of crisis.

Global pandemic notwithstanding, and as the split-screen comparison of the seatless Ethiopian olim with me the latte-sipping American may suggest, we truly have little to complain about. Despite a year of rocket fire from Gaza and the country’s long-term inability to elect and form a government, on a practical level we have had it easier than we expected. Even while we currently adhere to responsible social distancing, the sheer wonder of acculturating into life in the Jewish state is far from wearing off: children who effortlessly don the cloak of their ancient heritage, a quiet evening stroll bringing a glimpse of the same hilltops beheld by our forefathers, the palpable sense of biblical prophecies coming to life all around. It is even possible that the wonder itself will never wear off.

So deep and personal are these experiences that a national Yom Aliyah can hardly do them justice. A child may show his mother a little extra love on Mother’s Day, but the holiday cannot capture much about what it really means to be a child or a mother, certainly not in the way that Passover or Yom Kippur can capture the relationship between God and Israel.

So I don’t expect to do much to celebrate Yom Aliyah this year. Perhaps the holiday is better thought of as a reminder to native-born Israelis that we are here—arrivals from afar just like their own parents, grandparents, or great-grandparents, some of us with stars in our eyes from our first airplane flight, others desperate for caffeine and an extra pair of hands to push the stroller, all eager to plant roots in their native soil and see what will blossom.

What Aliyah Looks Like (for My Family at Least) in 2020