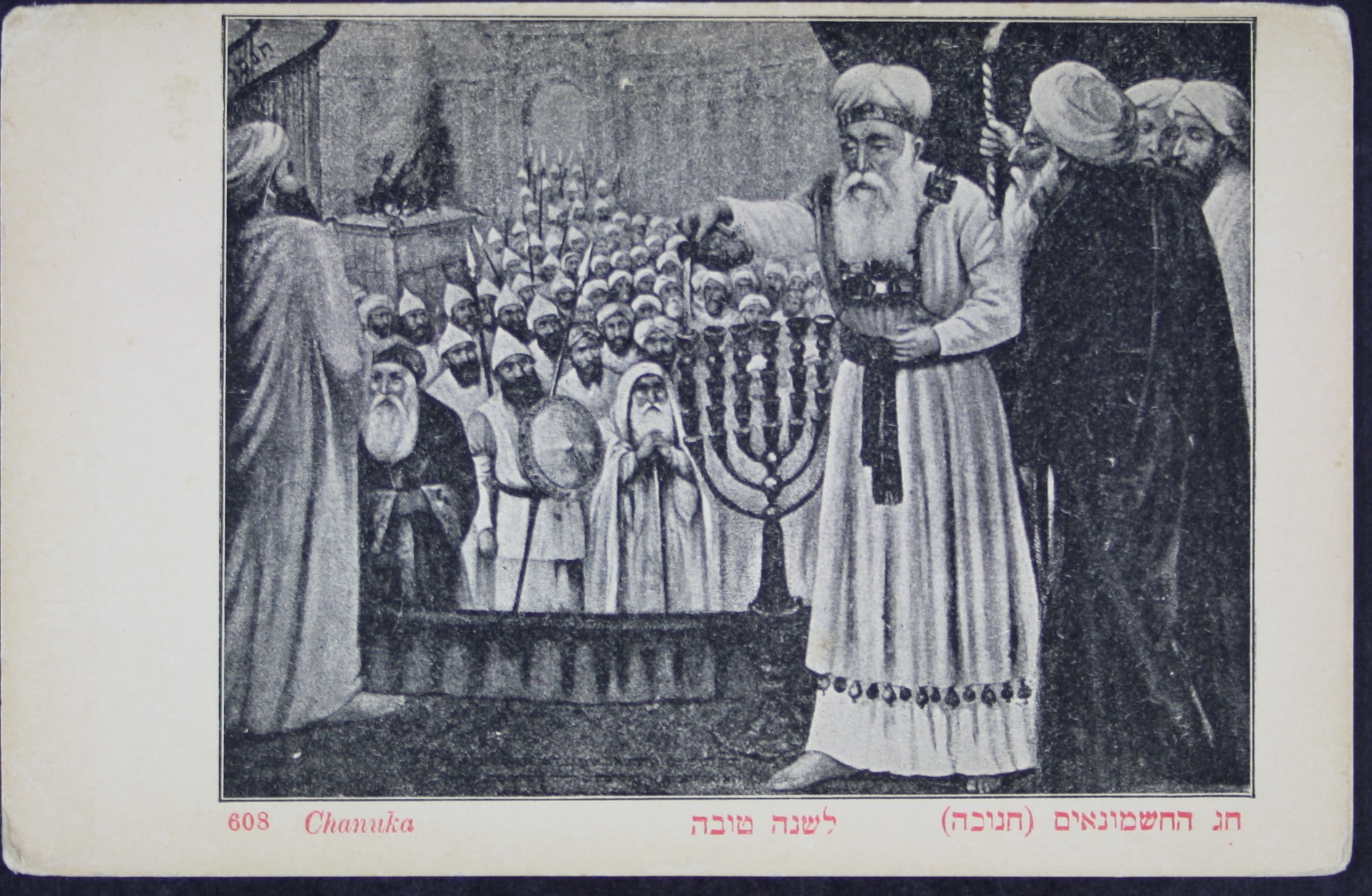 A Hanukkah illustration from a file of cards found in the National Library of Israel. Wikimedia.

While the basic elements of the Hanukkah story are both straightforward and well known—the Seleucid oppression, the heroic victory, and the miracle of the oil—the ways Jews have understood it have shifted over the centuries. There is, most famously, the striking discrepancy between the Talmud’s explanation of the holiday and the one found in the first and second books of Maccabees. But despite the many anomalies in the Talmud’s treatment of Hanukkah, there is little doubt that even in pre-talmudic times the holiday enjoyed a great deal of popularity in both the Diaspora and the Land of Israel. This very popularity may in part explain why the festival developed so many new shades of meaning over the centuries.

For instance, in the 10th through 12th centuries, Jews composed new texts—which quickly became popular in Germany, Italy, and the Islamic lands—emphasizing the Hasmoneans’ courage and military prowess. The Scroll of Antiochous, Yosipon, and other works of their kind turned Judah the Maccabee and his fellow warriors into Jewish versions of the heroes of classical antiquity or of such contemporary figures as Roland and El Cid.

With the advent of modernity, the holiday would be reimagined in a variety of ways yet again, in each case a reflection of the religious and ideological condition of different Jewish communities. Thus Jews who aspired to integrate into the surrounding society, as in Germany and later in the United States, turned their attention to Hanukkah’s proximity to Christmas. To a large extent, lighting colorful Hanukkah candles (going so far as to turn the menorah into a “Jewish Christmas tree”) and giving gifts to children imitate Gentile practices. More recently, Hanukkah in America seems, in some quarters, to have ceased to be a festival representing a people’s struggle for religious and national freedom, and has instead become an abstract universal symbol of sorts, in which the menorah signifies the light of freedom itself.

Conversely, modern Jewish literature offers a wealth of examples in which the encounter with Hanukkah, and especially with the menorah, marks the moment when a Jew distanced from tradition suddenly ponders the question of his identity. Two prominent examples are the great Yiddish writer I.L. Peretz’s story “The Hanukkah Menorah” and Theodor Herzl’s essay “The Menorah.” There are many others. In the lore of Chabad Ḥasidim pride of place is given to tales of Jewish prisoners in the Soviet gulag who lit the menorah at great personal risk. Often in these stories one of the cruel jailers is reminded of his Jewish identity just as he catches the inmates red-handed.

But for the Zionist movement in particular Hanukkah commands primary importance. Zionists see in the festival a celebration of the long-ago national existence of Jews who possessed physical courage, martial valor, political enterprise, and an unbreakable connection to their historical homeland. Some Zionists, in their retelling, even elevate the physical heroism of the Hasmonean fighters above the miracle of the flask of oil. Zionist educational institutions as well as Zionist literature, art, and theater have been imparting this message in innumerable ways for more than a century.

In this context, it is worth examining the significance that Zionist historians have bestowed on the holiday, not only as a national event but also as one of consequence for all of human history. Let’s begin with Joseph Klausner, the Russian-born Zionist intellectual and admirer of Ze’ev Jabotinsky, most famous for his research into the historical figure of Jesus. Klausner was eager to demonstrate the world-historical importance of the Jewish past, including the Hanukkah story. It’s worth quoting his words:

It was the first time in world history that an entire people was persecuted for its faith and endured terrible suffering for its beliefs and dogmas. Many did not withstand the ordeal of course. . . . But many thousands rose up, spiritual heroes who could not be compelled by any torture in the world or any threat of gruesome death to betray the teachings of their God. . . . They possessed an intuitive feeling that by betraying their God they would also betray their people, and if the Torah of Israel were lost so too would the people of Israel be lost. . . .

They were martyrs—the first among Israel and, perhaps, among all the nations—who surrendered their souls for the sanctification of God’s name. The nation, however, was not saved by martyrs alone. To save it, its God, and its Torah, passive resistance would not suffice. . . . In the martyrs’ stead, heroes had to arise—the great rebels and warriors of the House of the Hasmoneans: Mattathias son of Yoḥanan and his five sons, who with their blood attained freedom of religion and freedom for the homeland alike. (History of the Second Temple, 1952)

The Anglo-Jewish historian Cecil Roth, in his 1946 History of the Jews of Italy, expressed a similar sentiment about the Maccabean revolt:

It was one of the decisive events in human history. Never before had men been convinced, as they were then, that an idea was something to fight for and to die for; and the success of the revolt saved for mankind the ethical monotheism which lies at the basis not only of Judaism but also of Christianity and Islam, as yet unborn, and of Western civilization in its true sense.

The same argument appears in the work of Yitzḥak Baer and Menaḥem Stern, two members of the Jerusalem school—mid-century historians who strove to produce academically rigorous work that could serve as a usable past for the nation-state of the Jewish people. The latter wrote:

The Jewish masses’ passionate and uncompromising devotion to their faith was a deeply rooted phenomenon. Already in previous generations the Jews had proved that they would not hesitate to offer up their lives for the precepts of their religion. In this instance, however, an episode of martyrdom on a massive scale unfolded for the first time in human history. The steadfastness of the martyrs and the pious in those times of decrees against the faith served as an example and a paragon for Jews and non-Jews in all subsequent generations. (Jewish History in Antiquity, 1969)

These words are especially powerful because Stern himself was a martyr, murdered by Palestinian terrorists at the age of sixty-five while taking a stroll.

In a sense, it’s only natural that these modern Zionist writers, who were neither religiously devout nor actively hostile to religion, but who were all deeply immersed in the history of Western civilization, should wish to transform Hanukkah into a symbol of the Jewish contribution to world history. And yet, in another sense, it’s surprising: why emphasize that this was a fight for ideals with universal implications when they could instead stress that the Hasmonean revolt was a struggle for national independence, perhaps the only instance between the Babylonian exile and 1948 when Jews restored their sovereignty in the Land of Israel? And what better model for the New Jew that Zionism sought to create than the Maccabees, who rejected Hellenization and took up swords and spears to fight for their existence as a people?

I think the choice of historians like Klausner and Stern to give the Hanukkah story a place in the history of the world says something quite profound about Zionism itself. At the ideology’s core is an assertion that Jews must not lose their distinctiveness in mushy universalism, that they not allow themselves to be the forlorn maiden in the Song of Songs who tends others’ gardens while neglecting her own. Rather Zionism calls on the Jewish people to take control of its own fate, and to realize that if we are not for ourselves, there are none who will be for us. But at the same time, the Jewish national movement has never been one of chauvinism or narrow self-interest—much as Judaism itself has always sought to strike a balance between the universal and the particular.

Perhaps Klausner and his colleagues exaggerated in claiming world-historical importance for the Hanukkah story, but I do not doubt that it can be a source of inspiration not just to Jews but to all those who bear the responsibility to preserve a precious and threatened religious inheritance, to all who hear the call to fight, even fight to the death, for an imperiled, majestic way of life.