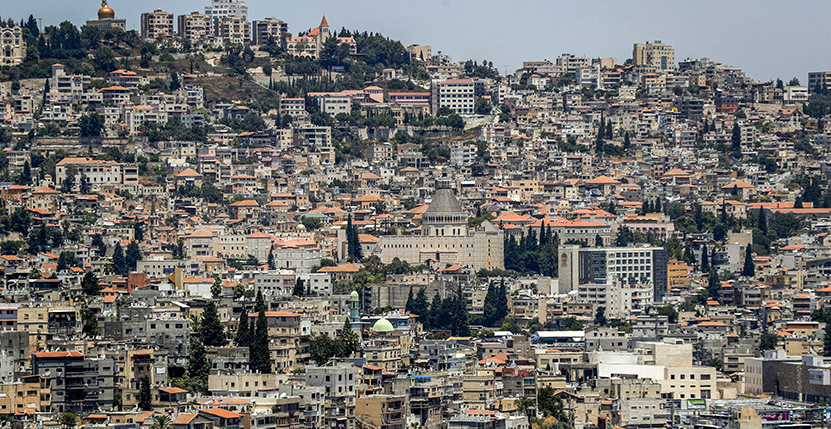 As the village where Jesus grew up, Nazareth is a pilgrimage site for Christians around the world. But you need not be a Christian to come admire the Church of the Annunciation there. In fact, it is a Druze lawyer who, on the first day of Hanukkah several years ago, has brought this Jewish professor to that sacerdotal site, where the angel Gabriel is said to have provided an unsuspecting Mary a prophetic heads-up on her impending pregnancy and divine progeny.

Today, there are two Nazareths. Both are in Israel. One is the old city where Christian and Muslim Arabs dwell in uneasy competition over their demographic weights and the height of their respective houses of worship. The other (“Upper Nazareth”) is where the Jews live.

My companion’s name is Talea. As a religious Druze, he is dressed all in black; but as a modern-style religious Druze, Talea covers his head neither with fez nor tarboosh. Rather, he sports a black baseball cap. He relishes recounting to me the time when a Jewish judge dressed him down for not removing the cap in court. As a Druze, Talea’s mother tongue is Arabic. In recounting that courtroom yarn, however, he affects the most formal of Hebrew registers that he has:

It is not known to me where in either the Rules of Procedure or the Code of Professional Conduct it is written that headgear is prohibited. If you order me to remove the hat, I wish to have your order recorded in the proceedings so that I may then register my official appeal.

Talea knew the judge would not accede to that request. Otherwise, he would have to have his no-cap injunction recorded in writing and be subject to review by his superiors.

“So how did the judge respond?” I ask, impatient to know how this Druze-Jews headgear court drama played out.

“‘Let’s get on with the case,’” Talea recalls the jurist saying, imitating his sniff and exasperated tone.

Talea has come to Old Nazareth to register documents in government offices for his clients; I have come along for the ride. For nearly four months I have been living in Talea’s village—the sole Jew among 6,000 Druze—doing sabbatical fieldwork on the learning, teaching, and use of Hebrew among these native Arabic-speakers. I first got to know Talea in his capacity as parents’ representative to the PTA of the primary school that his daughter attended. We soon became friends, and I always jumped at the invitation to join in during his periodic jaunts to courts and court offices in Nazareth and Haifa. Talea now asks if on the way back to our village I would like to pay a visit to the Shrine of the Prophet Shuaib. For the Druze, Shuaib is a kind of Jesus, a primordial human incarnation of the Divine. To the Jews, he is the venerable Jethro, father-in-law of and legal consultant to Moses.

“Betaḥ,” I confirm in our Hebraic lingua franca, “sure.” I also remind him that while we’re in Nazareth I want to meet with another lawyer, Khalid Mahmeed. Mahmeed, I have read, founded and presides over an educational institute unique in the Arab world. (For the sake of argument, let’s say that the Arab towns and villages of Israel’s Galilee are culturally part of the “Arab world.”)

On his phone Talea pulls up the telephone number of Khalid Mahmeed. He introduces himself as a fellow lawyer, explains that he is accompanying a visiting professor from Boston, and then inquires if he indeed presides over the museum we are searching.

“God preserve me!” comes the outraged voice, in Arabic, on speaker phone. “Why in the world would I do such a thing?!” But he knows whom we are actually seeking. It is his cousin, also a lawyer, with the same name. “Call back in five minutes,” he says, “and I will give you his number.”

In the meantime, we decide to have lunch. Talea drives us from the government offices in Old Nazareth to Natseret Illit—Upper Nazareth, Jewish Nazareth, where there is a big, shining, shopping mall. As we enter the food court, he greets a family, also in religious Druze attire, already seated.

“No. But they are Druze, and so we acknowledge each other.” I note to myself that I should ask yarmulke-wearing Jews if they do the same.

We choose the Italian option and have a delicious meal of Mediterranean-style fish with Middle Eastern accompaniments (hummus, Arab salad). From the food court, a breathtaking panorama stretches out in the valley interrupted by a uniquely pointed hill. Which hill is it? I ask aloud, to no one in particular.

“Mount Tabor,” comes the unsolicited answer in Hebrew from a table of Jewish women enjoying their post-lunch coffee. “And there is Megiddo.” They are indicating the easily visible sight of the ancient city—now an archaeological site—whose name evokes the end of the world: Armageddon. According to the New Testament Book of Revelation, this is where the war that will trigger the end-times is supposed to start. So from this food court in Jewish Nazareth, you can take in the onset of the apocalypse while sipping a cappuccino. What a way to go!

It is time to call back the wrong lawyer Khalid Mahmeed. He gives us the number of his cousin with the same name. Talea calls, gets the address, and accesses the Israeli miracle called Waze. It seems like an easy find. But the office is not at all at the address provided by the app. We circle several times before finding Khalid’s house. It is down a narrow, steep incline, without street name, without house number, without sign. Eventually, though, we are drawn to an open door at what seems to be the right place.

We cross the transom and are simultaneously riveted to, and repulsed by, the horrific images that greet us. They are blown up and affixed to the inner wall of the reception room. No need for sign or captions: grisly, iconic pictures of starving children, stacked corpses, and women being shot announce that we have, at last, entered the Arab Institute for Holocaust Research and Education, founded in 2004.

Far from being grim or ghoulish, the Khalid Mahmeed whom we had been seeking, dressed neatly and informally in a brown sweater over blue shirt and gray slacks, greets us with a warm smile and twinkling eyes. Khalid prepares coffee and tea for us, then excuses himself for getting back to a client. “Still need to make a living,” he apologizes, in Hebrew, with good humor. Eventually he joins us around the table in his office just feet away from terrible images from the Shoah. (He got them from Yad Vashem, Israel’s national Holocaust museum.)

“When Arabs hear the word ‘Shoah,’” Khalid says, “they black out. It’s almost like a paralysis. They don’t want to hear another word about it. But they—we—need to. We need to understand why the Israeli Jews are so defensive. Defensive about the memory of the Holocaust. Defensive, therefore, about Israel. We need to meet under the Sukkah, ‘The Tent of Condolences.’ That is why I have made this educational center. Because Arabs need to recognize the Shoah.”

Still, the low profile of his center—the lack of signage, its geospatial penumbra—is an indication that few Arabs in Nazareth are happy about what he is doing.

“Yes, it is true I am under lots of pressure from my neighbors,” the conscience-stricken lawyer goes on. The ever forthright Talea relates the initial reaction of Khalid’s cousin, indignant—or frightened—about being associated with Holocaust memory.

“That’s why I have added these pictures here.” He gestures to the museum’s yellowing cut-outs from a newspaper of “villages destroyed in the naqba.” Naqba (literally, “catastrophe”) refers to the routing of the Palestinians during Israel’s War of Independence. The blowback he mentions may also explain the cover of his book (published only in Arabic), The Holocaust and the State of the Jews. For on it is a montage of the separation wall with images of Shoah atrocities and graffiti that infers post-Holocaust guilt in the minds of the Jews of today’s Israel: “Are we the German Nazis that you treat us like this?” it reads.

To us, Khalid wishes to be clear.

There is no real comparison between the two, the Shoah and the naqba. Loss of homes and villages by the Palestinians was terrible. The Holocaust, on the other hand, was about the annihilation of an entire people. Six million human beings! It is the Jews themselves, though, who keep raising the comparison. For there is a problem in their language.

In English you have the words “equate” and “compare.” They do not mean the same thing. You can “compare” the Shoah to the naqba, in English, without claiming that they were equal in consequence and extent. But in Hebrew the verb hashvah has both meanings. So when Jews hear about any attempt to “compare” the naqba with the Shoah, they think we are trying to “equate” one with the other, to equalize them. They are the ones who keep the false comparison brewing, who keep it alive. You see how essential it is to understand the other’s language?

“The Holocaust is the indirect cause of the naqba,” he goes on. “Had there not been the Shoah”—an obscenity visited by Europeans upon other Europeans—“we would not have suffered the losses we did. But let us not ignore the reality of what has happened since.” (Never mind that his claim is untrue; a Jewish state was already being built well before the Holocaust.) Part of the reality, he continues, is a duality in the post-1948 Palestinians’ experience. “They lament the loss of their land. Okay,” he says. “But many of them also wind up in Kuwait, make a killing, and now drive around in Mercedes.” But to him the hypocrisy works both ways: “Israelis make political use of the khurban,” too. (Khurban is another Hebrew word for Holocaust.)

The sun is beginning to set, and we still intend to visit the shrine of the Druze/Jews’ revered Shuaib-Jethro. The two confreres of the bar vow to stay in touch. But before sending us on our way, the Muslim Mahmeed leaves us with yet another conundrum to contemplate. “Islamist terrorists don’t realize that every day, when they pray, they do so for the welfare of the Jews. Because the prayer calls upon Allah to bless Jews along with followers of Islam.”

In the meantime, I’ll have to take Khalid’s word for it. It’s not that I expect nearby Megiddo to turn into Armageddon tonight. But these few hours in Nazareth—beginning with Jesus and ending with Holocaust by way of apocalypse—have been intense enough. I see no reason to take any chances.