Why Don't Israelis Like the Word "Aliyah" as Much as They Used to?

In anti- and post-Zionist circles, the verb of choice for immigrating to Israel has been replaced by something less romantic. 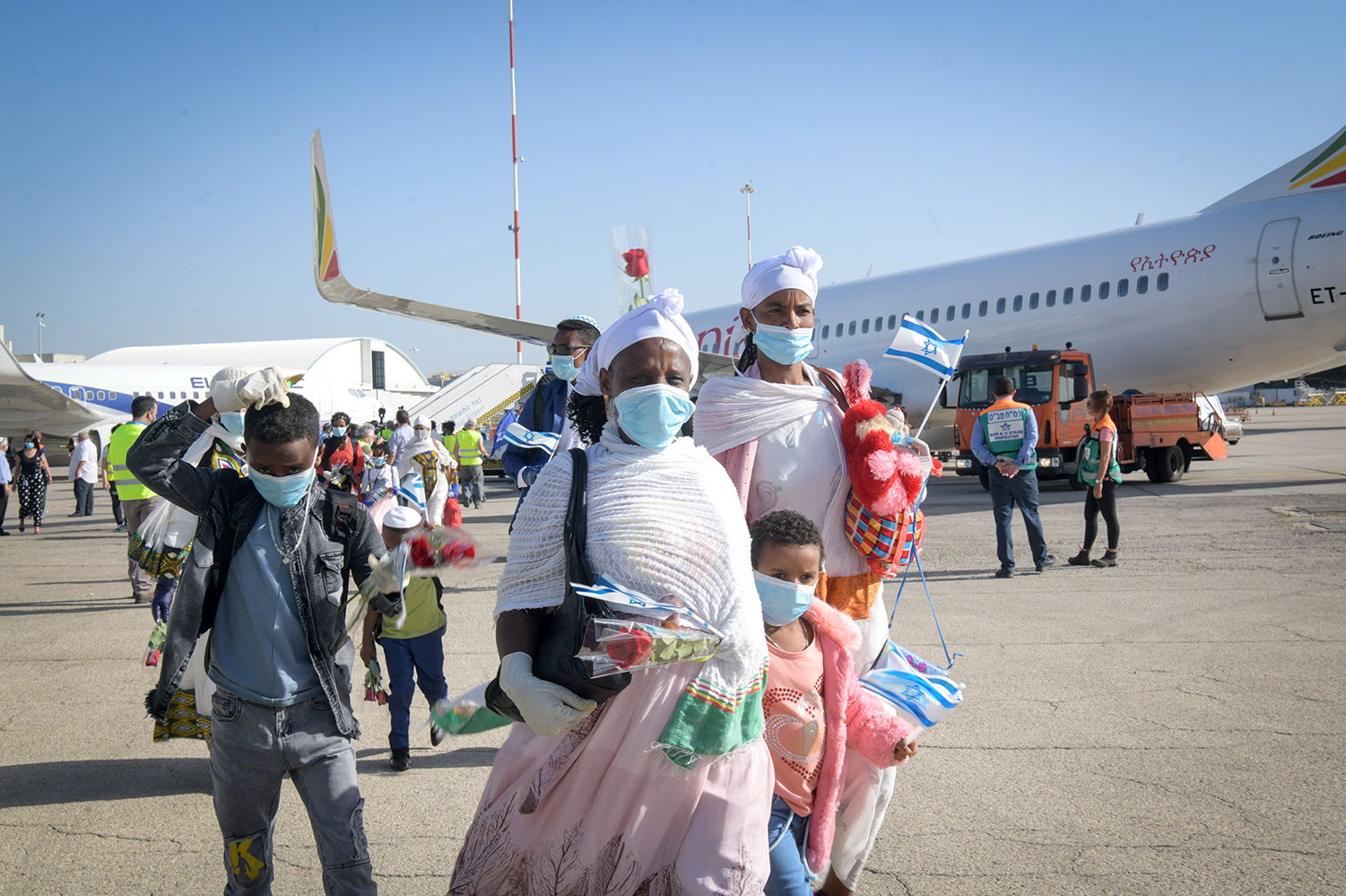 Members of the Falash Mura community arrive at Israel’s Ben Gurion Airport on May 21, 2020. Flash90.

Aheadline on November 22 in the Hebrew edition of the left-wing daily Haaretz announces that “[Jonathan] Pollard Expected to Immigrate to Israel after Removal of Restrictions.” The restrictions’ expiration, said an article in the same day’s English edition of the newspaper, “will allow Pollard and his wife finally to immigrate to Israel.” Two versions of the same thing? Not exactly. For at least some of Haaretz’s Hebrew readers, its headline of Pollard tsafuy l’hager l’yisra’el, “Pollard Expected to Immigrate to Israel,” would have had a jarring effect not present in the English.

This would have been caused by the verb l’hager, to immigrate or emigrate. It’s a perfectly good Hebrew word, though not a terribly old one. In the second volume of his monumental sixteen-volume dictionary, the great Hebrew lexicographer Eliezer Ben-Yehuda, while spelling the verb l’hagor, writes that it is “commonly used in Palestinian Hebrew speech and in many newspapers,” and dates its first appearance in print to an 1896 issue of the Jerusalem weekly Ha-Hashkafah, which he himself edited. For its etymology, Ben-Yehuda gave the Arabic verb hajara, to leave or forsake, and its accompanying noun hijra. The latter is familiar to us from our English “hejira”—which, when capitalized, refers to Mohammad’s flight from Mecca to Medina in 622 CE, the Year Zero of the Muslim calendar. Ben-Yehuda also linked hajara to the biblical character of Hagar, who is forced by Abraham and Sarah to leave their home—a linguistic connection that is indeed likely.

So what’s so jarring? Only this: in Hebrew, which before the 19th century did not have a specific word for “immigrate” or “emigrate” (in English, too, these are 17th- and 18th-century neologisms), there has always been one exception—namely, the verb la’alot, literally, “to ascend,” which refers specifically to traveling to, or settling in, the Land of Israel. It is already used this way in the Bible, as in a verse in the book of Ezra telling us that the latter alah mi-bavel, “ascended [to the Land of Israel] from Babylonia.”

In the time of the Bible, this “ascent” may have been conceived of as a simple geographical fact, since the journey to Palestine from Babylonia, and from other countries such as Egypt, was one from lowlands to highlands. In rabbinic literature, however, it has a spiritual dimension as well. Thus, when the Mishnaic tractate of K’tubot, which deals with Jewish divorce law, rules that “All can be made to live in [hakol ma’alin, literally, “all can be made to ascend to”] the Land of Israel and none can be made to leave it,” it is implying that living in the Holy Land means ascending to a higher level of existence. The refusal to live there, so Maimonides asserts, is a valid grounds for divorce for either party in a marriage:

If the man declares his wish to ascend [la’alot] to the Land of Israel and his wife refuses, she can be divorced without the rights granted her by her marriage contract. If she wishes to ascend and he does not, he must grant her a divorce with all her rights.

The noun for “ascent” in Hebrew is aliyah, and when secular Zionism became a force in Jewish life in the late 19th and 20th centuries, it was only natural for it to take the traditional terminology of la’alot and aliyah and use it for its own purposes. “Ascending” to the Land of Israel was now construed as both a national obligation and an ultimate form of Jewish self-fulfillment. No single Hebrew word has been more identified with Zionism. In English and other languages, “aliyah” is a term recognizable to most Jews even if they have no knowledge of Hebrew at all, and in Israel, aliyah and la’alot have remained the standard terms for immigration to Israel. It has been everyday Hebrew to say hi higráh l’amerikah mi-rusyah, “She immigrated to America from Russia,” but hi altáh l’yisra’el mi-amerikah “She immigrated to Israel from America.”

Has been—but no longer is. This is mainly because (a point I will return to) most Israelis today would say hi astáh aliyah l’yisra’el mi-amerikah, “she made aliyah from Israel to America,” and not hi altah. But in recent years, there has been another, less widespread trend too, one that is ideologically driven—namely, to refuse altogether to use the verb la’alot and the noun aliyah for immigration to Israel and to insist on replacing them with l’hager and its noun of hagirah. Preferred nowadays by the anti- and post-Zionist left, this is language that declares: “We have had enough of talking about settling in Israel as if it were an especially meritorious act. For us, it’s just an ordinary case of immigration. A Jew who moves from America to Israel is no different from a Jew who moves from Russia to America, or from anywhere to anywhere else in the world, and we will use the same word for them all.”

Haaretz has been at the forefront of this trend for quite a few years now and has regularly used l’hager rather than la’alot to refer to immigrating to Israel. Yet is one thing to encounter it in a feature article or column, quite another to do so in a front-page headline—and not only in a headline, but in one about a man for whom, whatever one thinks of him, settling to Israel after decades of imprisonment in America would be a culminating moment of his life. “For all we care,” the newspaper’s editors are in effect saying, “Pollard might just as well move to Australia. It’s all the same to us.”

It’s enough to make those of Haaretz’s readers who are not anti- or post-Zionists wince. And yet most of them, too, even while sticking to the paradigm of la’alot/aliyah, would today say of Pollard, as I have observed, not hu tasfuy la’alot l’yisra’el, using the verb la’alot, but hu tsafuy la’asot aliyah l’yisra’el, “he is expected to make aliyah to Israel.” This is not, I think, trivial. Rather, it reflects a deep-seated, and in no small measure ironic, shift in Israeli attitudes.

The irony lies in the fact that la’asot aliyah, “to make aliyah,” is not an indigenous Hebrew expression. It is a translation from English, and specifically, from the English of American Jews, who, unable to state the matter with a verb as in Hebrew—one can hardly say in English, “Did you hear about Sam? He’s ascending to Israel,” let alone “He’s olehing to Israel”—have resorted to the circumlocution “Sam is making aliyah.” This is a natural way to express oneself in English. It is not in Hebrew, and the question is: why would Israelis choose to resort to it?

The answer, I think, is that most Israelis, even if they are not anti- or post-Zionists, either no longer think of settling in Israel as “ascending” to a higher plane of Jewish existence or, if they do, are embarrassed to say so. They may love their country, but they have also grown cynical about its failings. What American immigrant in Israel has not had the experience of being asked over and over, “But why did you come to live here?” It is no longer axiomatic for Israelis, as it once was long ago, that a Jewish state is the best place for a Jew to be.

The expression la’asot aliyah—“to make aliyah”—is a reflection of this. A retranslation into Hebrew of a translation into English of the Hebrew verb la’alot, it is a way of saying: “Since we no longer understand what aliyah is all about, let’s refer to it in the language of those who do.” There is a sad self-belittlement in this, a kind of descent.

Why Don't Israelis Like the Word "Aliyah" as Much as They Used to?