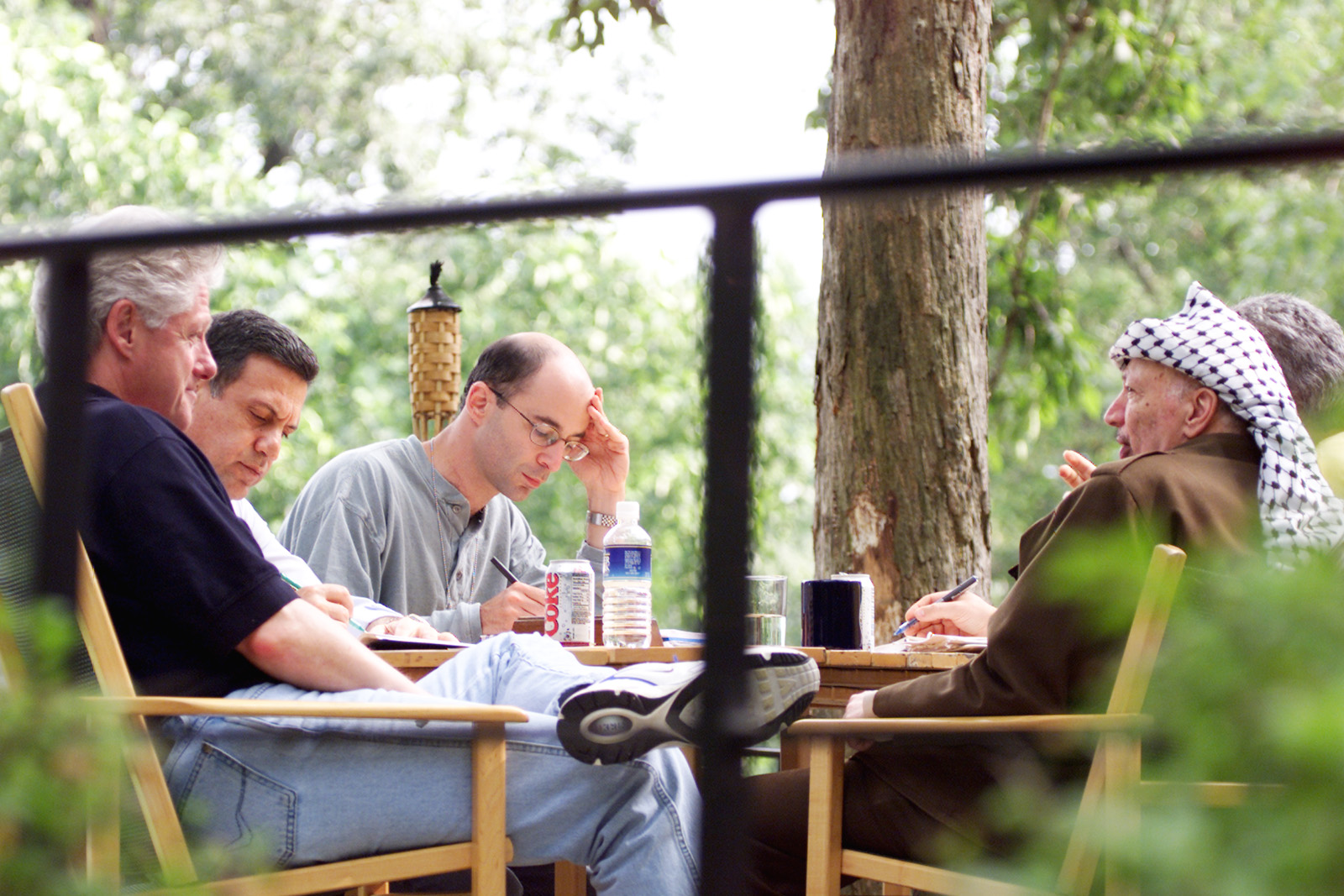 On July 17, 2000, U.S. President Bill Clinton meets with, from left to right, Palestinian negotiator Nabi Abu Rudineh, Rob Malley, and Chairman of the PLO Yasir Arafat at the Middle East peace summit at Camp David in Maryland. Photo by Sharon Farmer/Newsmakers via GettyImages.

The peace process between Israel and the Palestinians has in the last several decades sucked up more American attention, time, and resources than nearly any other conflict in the world. Presidents, cabinet secretaries, national-security officials, and diplomats have poured themselves into solving the problem. These resources have been expended not only because of how Americans perceived the Israeli-Palestinian conflict’s strategic importance to the United States, but perhaps more so because it is a conflict that engages and symbolizes the way Americans see themselves acting in the world.

Despite that huge effort, Americans haven’t succeeded in bringing the Israelis and the Palestinians to any kind of settled arrangement. Furthermore, as the Israeli researcher Shany Mor wrote in this month’s essay in Mosaic, American policymakers seem insistent on returning to the same frameworks of analysis and strategy that have failed systematically time and again. Now Mor joins Mosaic’s editor Jonathan Silver to explain what’s gone wrong, and to talk about why so many American peace processors think as they do about the Israeli-Palestinian conflict.

I ask in the essay: what is a peace process for? What is mediation for? What’s our concept of mediation, of post-conflict mediation? And I think that what we understand from this, from any kind of conflict―from a divorce settlement, from a labor dispute, and from a war between states―is that the job of a mediator is to get the two sides to a position that’s better for both of them than an open confrontation would be for either. To do that, you have to have a realistic sense of where both are, what they can conceivably achieve either in open conflict or not, and what the outcomes were of the previous rounds of conflict.

This is not a revolutionary idea. It’s not new. It’s something that pretty much any mediator would recognize, whether we’re talking about Ralph Bunche or Metternich or Talleyrand. We don’t lack a coherent theory of peace process. What we lack is the desire to apply it here, in this one specific case, where the peace processors do not seem to be motivated by a classic mission of mediation and conflict resolution, but by a kind of moral impulse, a moral impulse that sees the world thrown out of balance by Israel’s victories. The job of the mediator is to not solve a  conflict, not improve the position of both sides relative to what they could achieve by fighting, and not even by the way to have a special concern for the Palestinian side, it’s not about their cause of national liberation. What to me it seems to be motivated by is not a concern about rescuing the Palestinians from their statelessness, and not about mediating a conflict, but about rescuing the Israelis, who are seen to be morally fallen simply by virtue of their victory.