An impassioned letter about how to refer to Israel’s Arab minority. 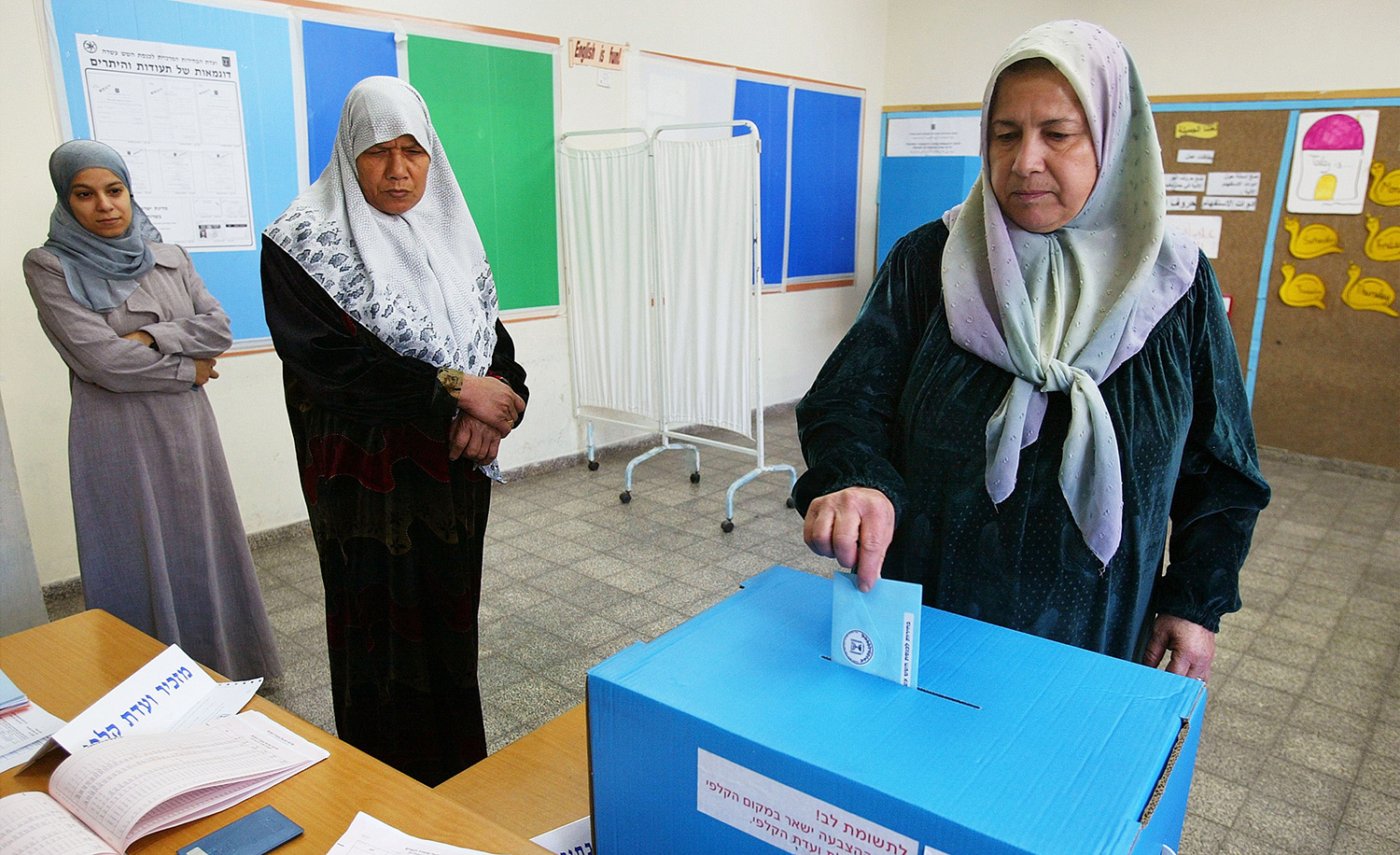 An Israeli Arab woman votes in 2003 in the village of Jaljuliya. David Silverman/Getty Images.
observation

Until a few weeks ago your name was as unfamiliar to me as it is to my readers. And, since I’ll never mail you this letter and you’re not a Mosaic subscriber, you’ll probably never see it. Still, after reading your June 2 op-ed in the Hebrew daily Haaretz, in which you explain why you prefer to call yourself “a Palestinian citizen of Israel” rather than resorting to any more frequently used term, I feel compelled to address this column to you rather than simply writing it about you.

Let me begin by saying that I understand you completely. The question of how both Jews and Arabs in Israel should refer to the country’s Palestinian population has been a vexed one since the state of Israel was created in 1948. There was a time when this population was commonly referred to by official Israel, and even by the Israeli media, as b’nei ha-mi’utim, “the minorities,” as if the very words “Arab” or “Palestinian” were illegitimate in such a context. For their part, these “minorities” have often spoken of themselves, and been spoken of in the Arab world, as “the Arabs of ’48” or “the Palestinians of ’48,” as if mentioning the name of the country they lived in was equally taboo. Each usage was the mirror image of the other, each attempting to efface inconvenient political realities.

Over the years, such euphemisms have largely disappeared, at least in Israel. At first they were replaced by the alternatives of “Arab Israeli” (yisra’eli aravi in Hebrew) or “Israeli Arab” (aravi yisra’eli), while in the plural the term was often arviyey yisra’el, “the Arabs of Israel.” The difference between “Arab Israeli” and “Israeli Arab” is a subtle but real one. It is akin to the difference between “Jewish American” and “American Jew,” with the noun in each case carrying greater weight than the adjective. Just as “American Jew” implies that one’s Jewishness is a more basic component of one’s identity than one’s Americanness and “Jewish American” implies the opposite, so “Arab Israeli” and “Israeli Arab” convey similar emphases. For this reason, “Israeli Arab” has been more popular with Arabs while “Arab Israeli” or “Arabs of Israel” has been more popular with Jews. As you put it in your op-ed, writing from an Arab point of view:

It’s no accident that [Israeli] Jews have insisted on the usage “Arabs of Israel.” This was a synthetically engineered term whose true purpose was to erase the Palestinian component from the identity [of the country’s Arab population] . . . to create an artificial distinction between those Palestinians who remained within the borders of the new state [of Israel] and those elsewhere, and to suppress the formation [among Israel’s Arabs] of any kind of national identity.

And for this reason, too, more and more Israeli Arabs have in recent years come to prefer the term “Israeli Palestinian” (filastini isra’ili, in Arabic) to “Israeli Arab.” This is a direct result of the Palestinian nationalism that has steadily gained ground in Israel’s Arab community since the 1967 war, prior to which this community had little contact with the Palestinians of the territories conquered in that year by Israel. “I am not just an Arab,” the term “Israeli Palestinian” says. “I am one who shares an identity with the Palestinians of the West Bank and the Gaza Strip, and who belongs to the same people that they do. Although I live in Israel, this identity cannot be taken away from me.”

For Jewish Israelis, apart from those on the political left, “Israeli Palestinian” has not been an easy term to swallow; indeed, many will not use it to this day. Nor would many Israelis accept that the “true purpose” of using the term “Arab Israeli,” as you put it, was to erase Palestinian identity. That term came into wide use at a time when pan-Arabism was a popular ideology in the Arab world, and Palestinians themselves wished to stress the primacy of their Arab identity. Nor, as a legal matter, is it the case that Palestinians who live on different sides of Israel’s 1967 borders are separated by a division that is only artificial. The ones who live on the Israeli side of that border are Israeli citizens enjoying almost all of the same rights and protections that Jews do, whereas those living on the other side are not.

But you are right, Hanin, that Jewish Israelis have only grudgingly, over time, come to concede that there is such a thing as a Palestinian people at all, and for many it has not been psychologically easy to absorb the fact that more than a million of that people’s sons and daughters are citizens of their country. The term “Israeli Palestinian” raises for them the specter of dual loyalty, just as the term “American Jew” does for some Americans. If being an Israeli Palestinian means that you feel more Palestinian than Israeli, and if Israel and the Palestinians are engaged in a long-standing conflict, then you obviously stand on the Palestinian side of it.

That, Hanin, is where you do stand. I accept this, though I might wish you felt otherwise. I might wish that some part of you also took the Israeli side, even as I know that this is an unrealistic expectation. Minorities are often ill-treated all over the world, and the state of Israel has not always acted as wisely or as well as it might have done toward its Palestinian minority, let alone toward the Palestinians of the territories conquered in 1967.

Still, speaking for myself (but I’m sure for many others as well), I would like to see things improve. I would like to see Israel become a country whose Palestinian minority can identify with it more. And because of this, it saddens me that that you now wish me to call you “a Palestinian citizen of Israel” rather than an “Israeli Palestinian.” Yes, I understand that it is hard for you, as you write, to use the word “Israeli” in regard to yourself. But think: if, on the one hand, I am an Israeli Jew and you are an Israeli Palestinian, we are fellow Israelis and share, despite all of our differences, a great deal in common; we are both equally invested in a country that belongs to us both and that we need to make as livable as possible for us both. But if, on the other hand, I am an Israeli Jew and you are a mere “Palestinian citizen of Israel,” I cannot feel the same way about you.

Yes, of course: citizens have rights; and if you are a citizen of Israel, I need to respect your rights. But I do not need to care about you beyond that, because citizenship is a mere formal status, and if that is all that you are, you and I are not part of the same national project.

Despite the fact that Israel’s minorities have suffered discrimination, I would like for you, Hanin, to care about Israel’s future. I would like to believe that you and I have a shared interest in making it a good one. But for that, as difficult as it may be for you, you have to decide that you are an Israeli. If you don’t wish to be one, then, though we may live in the same country, we simply don’t have the same stake in it.