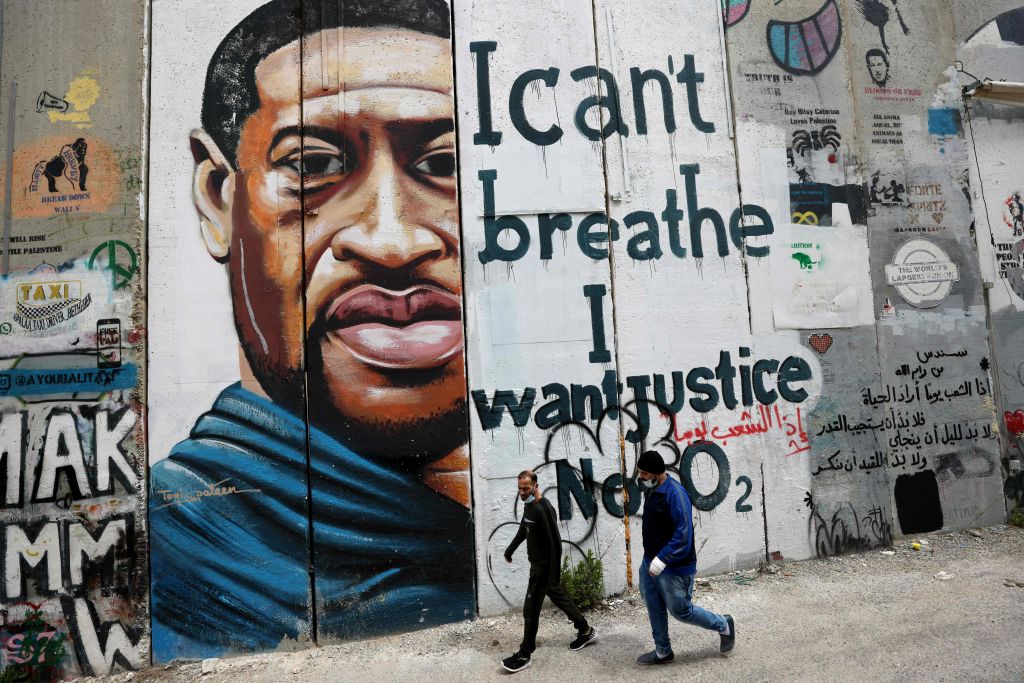 People walk past a mural of George Floyd on March 31, 2021, painted on a section of Israel’s separation barrier in the city of Bethlehem. Photo by Emmanuel Dunand/AFP via Getty Images.

In 1958, the American author Leon Uris published Exodus, the novel about Israel’s founding that became an international phenomenon. Its hero, though an Israeli kibbutznik, was portrayed as a blond, blue-eyed man of culture and elegance, a portrayal reinforced by the film version of the novel, which starred Paul Newman. Whether or not this was his intention, by portraying Israelis as racially white and as Western in their sensibilities, Uris was making it easier for most Americans to identify with Israel and its cause.

This week’s podcast guest, the frequent Mosaic contributor Matti Friedman, argues that Americans still see themselves in Israel―just not always in the way that Uris hoped. In a recent essay, Friedman finds in the American reaction to the Jewish state’s recent confrontation with Hamas the same mythology that once animated Uris’s writing—only in reverse. Where in Uris characters are portrayed with distinctly Western sensibilities so as to attract Americans to Israel, contemporary portrayals of Israelis are now advanced by those who wish to distance Americans―and the world―from Israel.

When you encounter observers of this place [Israel], you notice that most of the international observers here are just looking for some kind of reflection of themselves or some kind of ammunition that serves whatever ideological war they’re waging back home. I learned to distinguish [among] journalists between geologists and miners. If you want to be a geologist, you have to study for a long time, you really have to know what you’re talking about. You’re going to come to a piece of ground and you’re going to study it and you’re going to come up with some really complicated and contradictory information that very few people are going to understand. That’s geology.

But if you’re looking for gold as a miner, then you don’t have to know very much, you can just start digging. And when you find gold you know it and you take it home. Most observers fall in the second category, so if your looking to prove that Israel is liberal, a utopia, pro-gay rights, you can find proof of that there, and it’s certainly true in some ways. You’ll go to Tel Aviv and you’ll see that this is a very liberal country, in many ways much more liberal than the United States. On the other hand if you’re looking for proof that Israel’s a fascist, gun-wielding, ethno-nationalist hellscape, you’ll also find that. The country is a very complicated place. I don’t think it’s necessarily more complicated than most countries, it’s just that the scrutiny is much more intense here. People will find what they’re looking for because all of the trends exist here.