Is the Most Iconic Sentence of Israel's Declaration of Independence True?

David Ben-Gurion was inspired by the Hebrew Bible. How true to it was he? 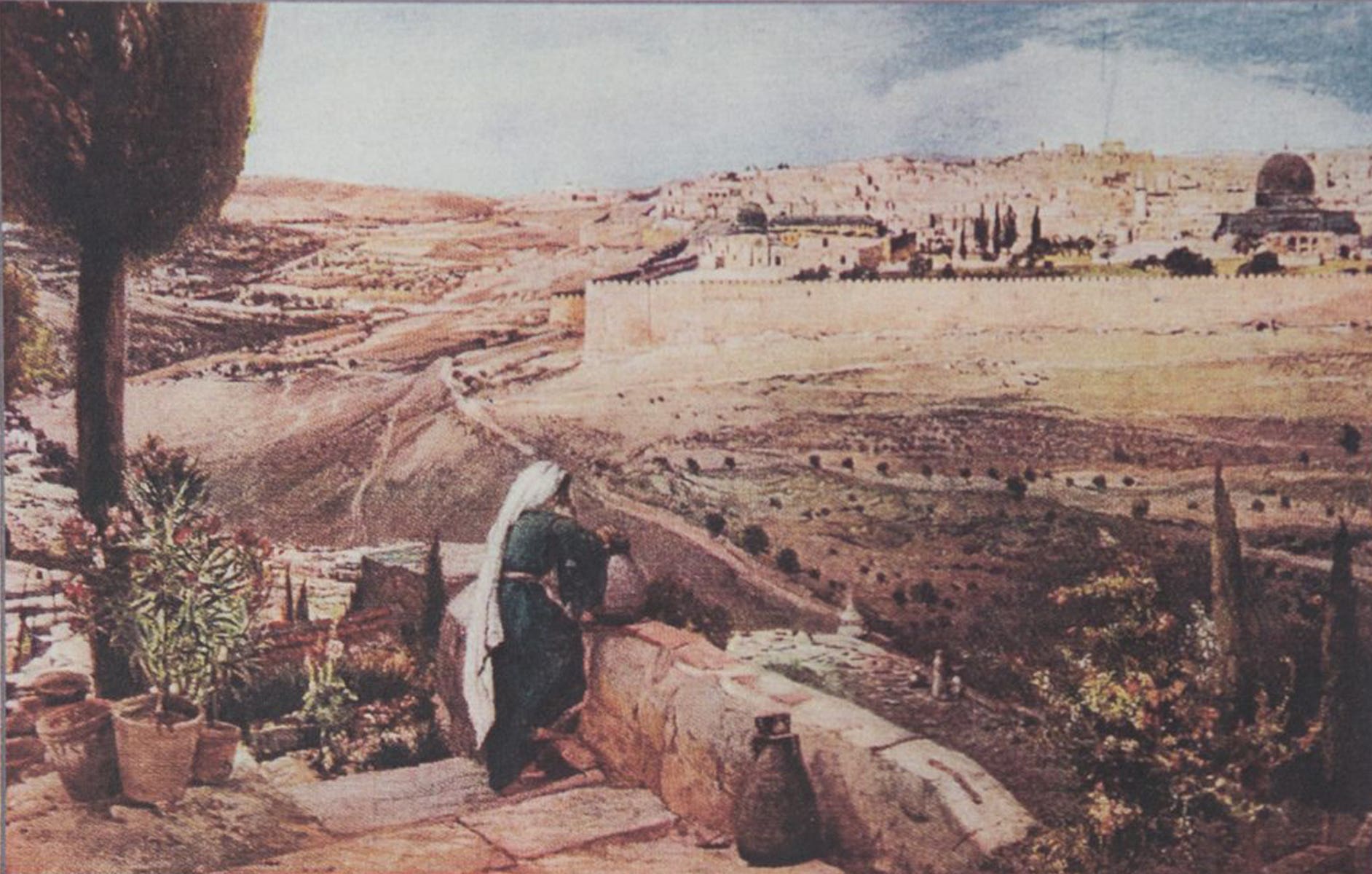 An illustration from 19th-century guidebooks to pre-state Palestine.

Observation
Daniel Gordis
About the author

“The Land of Israel was the birthplace of the Jewish people,” b’erets Yisrael kam ha-am ha-y’hudi, begins Israel’s Declaration of Independence.

It’s an iconic sentence, but is it true? The Bible seems to suggest that it isn’t. On numerous occasions, the Torah states that it was not in the Land of Israel, but elsewhere, that the Israelites became a people. The first person to designate the Israelites a people (in Hebrew, am) was Pharaoh: “Look, the people of the sons of Israel is more numerous and vaster than we. Come, let us be shrewd with them lest they multiply” (Exodus 1:9). A few chapters later, it is God who speaks of the Jews becoming a “people”; here, too, they are in Egypt: “I will take you out from under the burdens of Egypt and I will rescue you from their bondage. . . . And I will take you to Me as a people and I will be your God” (Exodus 6:7). Later, still in the desert: “You will become for Me a kingdom of priests and a holy people” (19:5). Encamped in the deserts of Moab on the eastern side of the Jordan river, it is Moses who speaks: “Be still and listen, Israel. This day you have become a people to the Lord your God” (Deuteronomy 27:9). None of these are said in the Land of Israel.

Why, then, claim that “The Jewish people was born in the Land of Israel”? Perhaps the reason is that Ben-Gurion was not merely dispassionately reporting the past, but shaping a national myth and political history in which the Jewish people’s greatest accomplishments unfolded in their ancestral homeland. Perhaps he was writing as a statesman and not a historian, tailoring a narrative for a people about to restore their sovereignty in that land after two millennia.

But if that were so, it would raise disquieting questions. Must that dignified purpose be pursued at the expense of accuracy? Did Ben-Gurion distort the biblical record in order to provide a biblical warrant for the reestablishment of a Jewish polity? After all, he consciously evokes the Bible in the very next sentence, “Here they . . . gave to the world the eternal Book of Books.”

Translating Israel’s Declaration of Independence is impossible without the Hebrew Bible in hand. By tracing the biblical provenance of key phrases in the Declaration, we will see that in fact, Ben-Gurion is not distorting the biblical text, and it is only the challenge of rendering its allusive Hebrew into English that introduces confusion. By way of example, let us explore two phrases in the Declaration that cannot be properly understood without an appreciation of the way that they are in dialogue with rare biblical words. In the first, the claim that the Jewish people was “born in the Land of Israel,” the Declaration’s dialogue with the Hebrew Bible suggests that the claim is more powerful—and truer—than the mistranslation “birthplace of the Jewish people” suggests. In the second instance, we will see that the Declaration’s call to Diaspora Jews to “rally round the Jews of the Land of Israel” (as it is commonly translated) was in fact a call for something very different.

The key to understanding the claim that the Jewish people was born (kam, literally, “arose”) in the Land of Israel lies in the Declaration’s next phrase. “Here they first attained to statehood” is how almost everyone translates the essentially untranslatable Hebrew, bah ḥai ḥayyey kom’miyut mamlakhtit, “here they lived a life of sovereign independence.” Note, though, that first letters of the word kom’miyut (“standingup-ness” or “existence”) are almost identical to the word kam in the Declaration’s first sentence, which we translated as “born.” Kom’miyut is a very unusual Hebrew word, found only once in the Hebrew Bible. “I am the Lord your God Who brought you out of the land of Egypt, from your being slaves to them, and I broke the bars of your yoke and made you walk kom’miyut”—“upright” (Leviticus 26:13).

When the Declaration asserts that that the Jewish people was “born” (kam) in the Land of Israel, it is making the claim that mere survival in Egypt did not constitute genuine peoplehood, even if Pharaoh noticed the Israelites as a distinct population. Nor did meandering in the desert, nor did any of the other episodes of their desparate wanderings.

By interpreting kam by reference to kom’miyut, we can see that the Delcaration is elevating an empirical observation—that the Israelites are a group that is set apart from other groups—to a moral claim, that peoplehood requires independence. When Ben-Gurion’s text claimed that it was in the Land of Israel that the Jewish people was born, what he was saying was that it was here in the land of Israel that they first walked upright, here that they embraced the dignity and responsibility of sovereignty, and thus, here that they began to realize their promise as a people.

Given Ben-Gurion’s worldview and the Declaration’s careful phrasing—phrasing that invites dialogue with the Hebrew Bible—the first sentence is not an inaccuracy but a claim about what constitutes a worthy Jewish life, that is, a claim about the meaning of genuine peoplehood.

Yet another passage from the Declaration can be correctly understood only in the context of its dialogue with the Bible. Towards its conclusion, the Declaration turns to Jews in the Diaspora, and asks them to participate in the extraordinary project then being launched. The Israeli government’s official translation of that paragraph reads as follows:

We appeal to the Jewish people throughout the Diaspora to rally round the Jews of the Land of Israel in the tasks of immigration and upbuilding and to stand by them in the great struggle for the realization of the age-old dream—the redemption of Israel.

If the ambiguities of the word rendered in English as “born” in our first example suggests that the Declaration is inaccurate, the English phrase “rally round” here softens a substantive demand. If above we needed to understand the dialogue between the Declaration and the word kom’miyut, here the critical word is l’hitlaked.

Despite the translation, l’hitlaked does not mean to rally around. In the Bible, the root of the verb le-hitlaked, l-k-d, has a military connotation, usually meaning “to capture” (as in Joshua 10:1; Judges 1:8; 2Samuel 5:7, and many more such instances). The reflexive form of the verb, l’hitlaked, appears only twice in the Bible, both times in the book of Job. “Water congeals like stone, and the face of the deep locks hard,” is how Robert Alter translates Job 38:30. The other instance, Job 41:9, Alter translates as “Each sticks fast to the next, locked together, they will not part.” The verb l’hitlaked as it appears in the biblical text means to become solid, to become one, inseparable.

More evidence for this interpretation can be gleaned from other aspects of this sentence that are misleadingly translated. To wit, the words “in the task of” do not appear in the Hebrew. They are a translation of a single Hebrew letter, the letter bet, which often means “by.” Thus, a more literal translation is: “We call upon the Jewish people throughout the Diaspora to become one with the Jews of the Land of Israel by immigrating and building, standing by it [the Yishuv] in the great struggle for the realization of the age-old dream—the redemption of Israel.” Indeed, the Declaration calls on the Jews of the Diaspora not only to come to Israel, but to join the fight for its freedom.

For the most part, that did not happen, of course, and with time Ben-Gurion came to understand that it would not. By the early 1950s, when the military battles had subsided but immigrants from places like America had not come, an anguished Ben-Gurion wrote, “For hundreds of years, a question-prayer hovered in the mouths of the Jewish people: would a country be found for this people? No one imagined the frightening question: would a people be found for the country when it would be created?”

Precisely because the Declaration’s intent and the worldview of Western Diaspora Jews were so at odds, it seemed prudent to adopt a translation of the Declaration that would obfuscate that gap. But that decision ought not blind us to the fact that l’hitlaked asked for more than the dispersed Jews to “rally round” the reborn Jewish state. The language of the the Declaration, read through its biblical references, called for an end to the Diaspora, for massive Jewish immigration to Israel, and not only from the lands where they were oppressed, but also from the lands where they were fully integrated and accepted. Not since 586 BCE had most of the Jewish people lived in the Land of Israel. Two and a half millennia had passed; now, the Declaration was proclaiming that it was time for the Jewish people to come home.

Ben-Gurion surely felt disappointed when Jews around the world did not flock to the newly founded state. But I suspect he would have delighted in the knowledge that the text of the Declaration was leading Jews to open their Bibles. For Ben-Gurion was not only Israel’s founding legislator, he was also among its foremost civic teachers. His teaching that modern Israel’s sovereignty is inseparable from the Jewish people’s biblical heritage is laden in the very text of its Declaration of Independence.

Is the Most Iconic Sentence of Israel's Declaration of Independence True?