Checking In on Thomas Friedman

When it comes to Israel, the longtime columnist, a bellwether for conventional American opinion on the Middle East, is stuck three decades in the past. 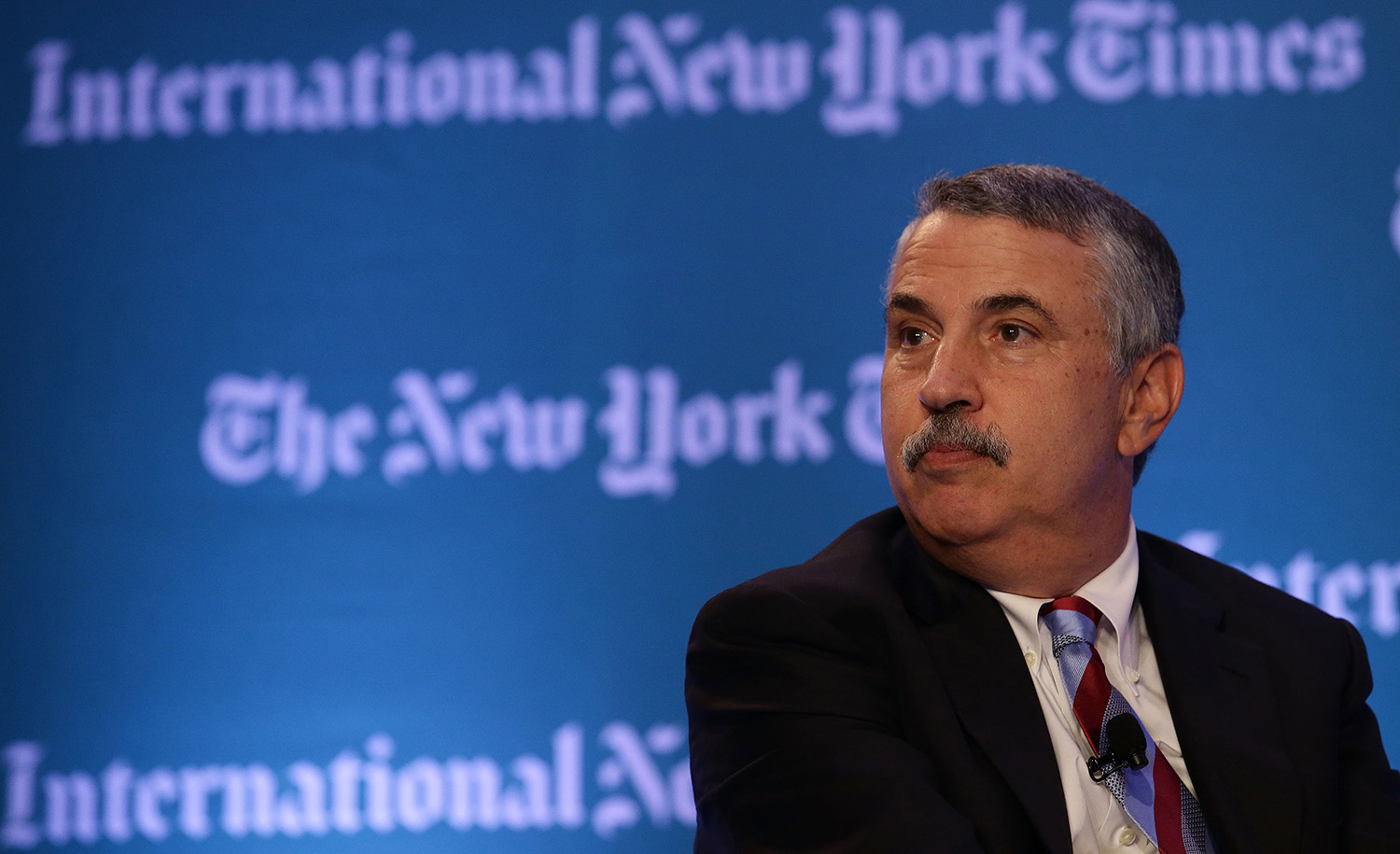 For the past four decades, Thomas L. Friedman has been writing about Israel and the broader Middle East for the New York Times. As recently as the 1990s and early 2000s, much of educated America got its view of happenings in the Middle East through Friedman’s opinionated reportage. Having done a lot of shoe-leather journalism in Beirut and Jerusalem in the 1980s and 1990s, Friedman knew the personages, issues, and social dynamics that defined the region at that time. In those days he told stories from the region fairly well—filtered, of course, through his own liberal internationalist perspective.

The days when Americans got their news about the Middle East from just a few sources is long gone. Fraying, too, is the liberal internationalist consensus that defined American foreign-policy thinking for decades, even as Russia’s war in Ukraine revealed that it has deeper roots in the American character than one might have thought. Friedman continues to represent an important strand of that thinking.

Checking in on his work is thus a way to gauge the temperature of conventional American opinion on the Middle East. A reading of Friedman certainly confirms what others have noticed for some time: if “mainstream liberal opinion” has not yet abandoned support for Israel, it is certainly moving in that direction. The sources of this movement have been less well understood. One reason may be that like many other commentators, Friedman still views Israel and its neighbors through the assumptions and intellectual categories that dominated American Middle East discourse in the 1990s. But Israel has changed dramatically just over the last decade, to say nothing of the last two or three. And the failure to keep up with those changes is producing a healthy degree of cognitive dissonance.

Friedman’s writing is a case-in-point. His old efforts at moderation and his general inclination to think of Israel as a basically good place still hold up. In a recent column, he explicitly distances himself from the small but growing band of commentators who use the calumny apartheid to describe the Jewish state. And yet, he claims that Israel’s ongoing rule of the West Bank is an “ugly cousin” of apartheid. He has not forgotten the many times that Palestinian leadership said no to generous (and perhaps unworkable) offers by Israel. But this, in his estimation, does not excuse Jerusalem for ignoring the “existential” question of Palestine over the last few years. Citing no less an authority than John Kerry, he warns that unless Israel quickly works toward the creation of a Palestinian state, the Palestinian “demographic timebomb” will end either Israel’s democracy or its Jewish character.

Nevertheless, the author of The World Is Flat sees the shoots of hope in the Bennett-Lapid coalition government, which hobbled along for a year before falling last month. That pragmatic, trans-partisan government is, in Friedman’s view, what Israel needs. And it serves as a model for other countries as well. Coalitions of this kind are a path “effectively [to] govern democracies in this era of rapid technological, demographic, and climate change.”

What is standing in the way of the success of such governments, in Friedman’s mind, is the cunning of authoritarian populists, like Benjamin Netanyahu. Friedman follows a parade of analysts, including the venerable Robert Kagan, who have grouped Netanyahu in an “axis of authoritarians” alongside figures like Trump, Modi, Erdogan, Bolsonaro and, yes, Vladimir Putin. (To their credit, most analysts now put Putin in a bucket of his own). As Friedman recently put it, Benjamin Netanyahu and Donald Trump are “political brothers from different mothers.” Israel could be fundamentally decent, he suggests, if such retrograde figures and forces could be chucked out of the way.

It is not hard to show how both the substance and emphasis of Friedman’s thinking here stays within the realm of the orthodoxies of the 1990s and 2000s. At that time, it was hard to find an analyst who did not think that the Israel-Palestinian conflict was an existential challenge for Israel, or for the Middle East as a whole. “Will Israel Live to 100?” asked Benjamin Schwarz in the May 2005 issue of the Atlantic, another redoubtable voice of conventional expert opinion. Israel’s inability to solve the Palestinian conflict gave Schwarz grave doubts.

It’s worth recalling, too, that the argument that Israel faces a choice between its Jewish and democratic character thanks to an exponential Arab birthrate was perhaps the central argument used to justify the recognition of the PLO in the Oslo Accords in the 90s and the subsequent efforts toward a two-state solution in the 2000s. It is rude but necessary to point out that the original or at any rate chief proponent of this opinion was not the many genuine friends of Israel who have believed it but Yasir Arafat. “The womb of the Arab woman is my greatest weapon” was a favorite pronouncement of the late Palestinian president who, of course, was also unwilling to surrender his “lesser” weapons in the struggle.

The dichotomy between pragmatic democrats or liberals and authoritarian populists seems to represent a new turn in the discourse. And I am not one of those who thinks that these concepts are without any explanatory use. One must, however, admit that in much writing liberal vs. populist is a semantic update on the turn-of-the-millennium framework that saw the Middle East divided between the moderates in white hats and the extremists in black ones.

To be sure, the antiquity of a concept is not proof of its falsehood. It may be the case that Israelis are, as Friedman would have it, dangerously deluded if they think they can defer the Palestinian question until later. That Yasir Arafat’s “demographic timebomb” has not gone off—Arab birthrates have fallen along with general prosperity while Jewish birthrates, including secular ones, have risen—is no guarantee against future demographic changes. And there certainly is quite a lot of authoritarianism to go around in the Middle East (along with its hidden reverse, the potential for fragmenting or failing states).

But the reliance on the 1990s way of thinking has left its victims flat-footed or worse when it comes to anticipating or understanding current developments in the Middle East. In 2020, highly credentialed scholars at such outfits as the Brookings Institution were not only caught completely off guard when Israel achieved normalization with the UAE, Bahrain, and Sudan through the Abraham Accords, but took offense at the idea. And their opposition was acid. Tamara Coffman Wittes, now a Biden appointee, wrote that the accords were a “betrayal of Palestinian interests.” (Wittes has since recanted her prior opposition, a hopeful sign that there are perhaps some achievements that the expert foreign-policy hands can’t throw away.) Canvasing Middle East experts on the Accords on their first anniversary, the Brookings scholars Shibley Telhami and Marc Lynch found that nearly three quarters had a negative view of them. They would not, according to the survey, advance Israel-Palestinian peace.

While Thomas Friedman did not anticipate normalization, he did celebrate the Abraham Accords. And he certainly understands that what has drawn Israel and the Gulf States closer together is shared fear of Iranian ambitions. And yet, like the scholars canvased by the Brookings Institution, he views Israel-Gulf relations principally through the lens of the Israel-Palestinian conflict. The Abraham Accords will only be vindicated, he argues in a recent column, if they force Israel to move with alacrity toward final-status negotiations with the Palestinians.

A good foreign-policy analyst has the responsibility to understand the motives and actions of foreign actors better than they themselves understand them. But before he can do so, he must try to understand their motivations as they themselves do. This Friedman fails to do. At the moment, the constituency in Israel advocating an immediate two-state solution is vanishingly small. This is not because Israelis have become more authoritarian and less liberal. As the Israeli commentator Rotem Sella recently put it, they were rather mugged by reality—the second intifada and its aftermath persuaded them that the situation is not ripe now. Israelis across the political spectrum reject the policies that they think were responsible for children getting blown up in pizza parlors. Similarly, when I talked to prominent figures in the UAE last spring, I heard genuine sympathy for the Palestinians as Arab brethren and a great deal of lip service regarding Palestinian national aspirations. And the fact that the Abraham Accords have already withstood one sad round of Israel-Palestinian fighting is good evidence that the alliance may be durable—or as durable as any alliance in the fickle Middle East can be. Israel and the UAE may be wrong to think this way. But one should also consider whether they may be right.

The singular and overriding focus on the Israel-Palestinian conflict is intellectually harmful in other ways. To wit, it masks one of the more surprising and least covered events of recent times: the Israelization of Israeli Arabs. While Thomas Friedman and other analysts have been thinking in terms of demographic tensions, Israeli Arabs over the last decade have—by social, economic, and even cultural measures—become more comfortable being Israeli. Beginning around the mid-2000s, this trend picked up steam alongside Israel’s remarkable economic growth and viable economic opportunities in high-tech and other sectors for Arabs. A friend who teaches at Tel Aviv University now reports he sometimes has trouble identifying whether a particular student is an Arab or a Jew—something that would have been unthinkable a decade ago. In many Western and some Israeli accounts, Mansour Abbas’s Ra’am party is often called Islamist. But in many ways the party acts like just another very Israeli clientelist party, happy with the status quo and merely seeking to get a piece of a growing pie. This phenomenon presents great new opportunities as well as challenges. And one cannot predict how it will turn out; there are major challenges in the Arab sector in Israel as well. Yet it is clearly scrambling Arab-Jewish relations in the Land of Israel. As with many other subjects, the discourse has not caught up.

There are no shortage of urgent questions facing Israel now. What happens if Russia tries to play the Iran card—or other Middle East cards it has—more decisively than it has hitherto? At what point does Israel’s terrible political system not only lead to government paralysis but endanger the actual operations of the state? What happens when the Palestinian Authority president Mahmoud Abbas dies? What would the ensuing chaos in the West Bank do to Israel as well as to Jordan? There are some good new voices, Israelis and foreigners, who are writing about these difficult questions with fresh eyes. But at the New York Times and the other mainstream institutions that once defined American intellectual life, old assumptions die hard.

Checking In on Thomas Friedman