Podcast: Robert Nicholson on the Changing Face of Evangelical Zionism

Has Christian Zionism already peaked in the United States at the same time that it’s just beginning to pick up steam in Africa, Asia, and Latin America? 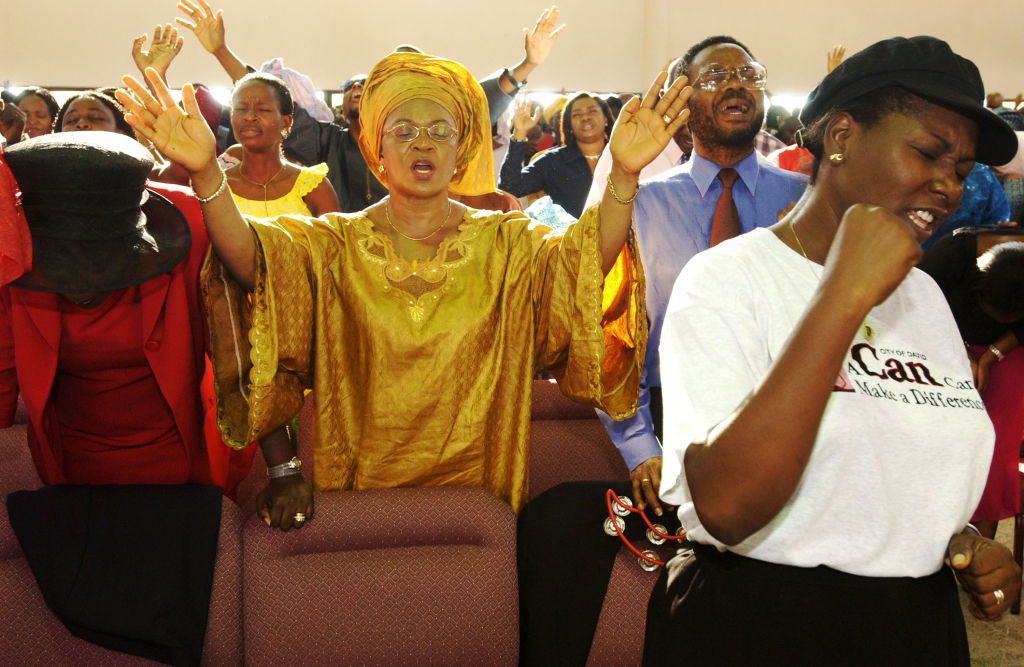 Nigerian Christians pray together at the City of David Church in Lagos, Nigeria, on September 28, 2003. Photo by Jacob Silberberg via Getty Images.

Observation
Robert W. Nicholson and Tikvah Podcast at Mosaic
About the authors


Robert W. Nicholson is the president of the Philos Project. A former Marine and Tikvah fellow, his writing has appeared in the Wall Street Journal, Providence, Mosaic, and elsewhere.

In October 2013, Robert Nicholson wrote a defining essay in Mosaic, “Evangelicals and Israel: What American Jews Don’t Want to Know (but Need to).” It in he outlined the wide and deep support that millions of Christian evangelicals had for Israel. He also sounded a note of caution: that support could diminish over time.

Nearly ten years later, that warning may be coming to fruition. At the very least, the communities of American Christian evangelicals who formed the basis of Christian Zionism have decreased in numbers and influence. But there’s some countervailing news: in other places around the world, from Brazil to Nigeria to Guatemala, evangelical Christianity has expanded, and with it, the possibility of support for Zionism. On this week’s podcast, Nicholson, the president of the Philos Project, joins us to explain what’s driving the changing face of evangelical Zionism in America and the rest of the world.

There is one major flaw, one could argue, in evangelicalism: that is that there is no central authority. Where the Roman Catholic Church has the Holy See, where the Orthodox Church has the Ecumenical Patriarch or other metropolitan patriarchs, the Protestant world, in particular the evangelical side of Protestantism, that is much less denominationally based, is kind of a free-for-all, certainly in comparison with some of these older forms of Christianity. What that means in practical terms is a constant iterative process that evolves and metastisizes in weird ways that no one can predict. It’s largely driven by charismatic personalities; anyone in evangelicalism, or virtually anyone, can start a church, can write a book, can launch a podcast, and if that person is a compelling speaker and has a message that resonates, that person could build a mega-church with 50,000 or 100,000 people in it.

What that means is that there is an ongoing, and these days quickening, fragmentation and atomization of evangelicalism, and in the age of social media, a fierce and growing competition among evangelical leaders, their churches, their denominations, for the attention of potential constituents. I won’t go too much further into this, but what it means is that it’s become extremely consumer-driven. Evangelicalism used to be very text-heavy, very, one could say, fundamentalist in its approach to faith and to the keeping of certain provisions of Scripture. These days it’s a little bit more fluid and the text has become a little less important than the show of an evangelical service. Some evangelical services—I’ve heard this from non-evangelicals who attend them—seem almost like rock concerts, complete with strobe lights and fog machines. Thank God that’s not the majority, but it’s not uncommon.

What it means is that some of these core, more “fundamentalist ideas” connected to Israel and other things have been diminished in importance. And as this atomization increases and a new generation comes up that doesn’t remember all those things that we were talking about [the trials of Israeli history, including the War of Independence and the first and second intifadas], at a certain point when Israel comes up people kind of turn their heads sideways and say “why are we even talking about that? What does that have to do with what we’re doing here? What does that have to do with my own spiritual journey?” You see that in lots of small anecdotal ways, but in the aggregate it’s making a big difference on the American church in the 21st century.

Podcast: Robert Nicholson on the Changing Face of Evangelical Zionism