Can Anyone Translate the Name of a New Israeli Political Party?

The Blue-and-White party has transformed into . . . well, it’s unclear, at least in English. 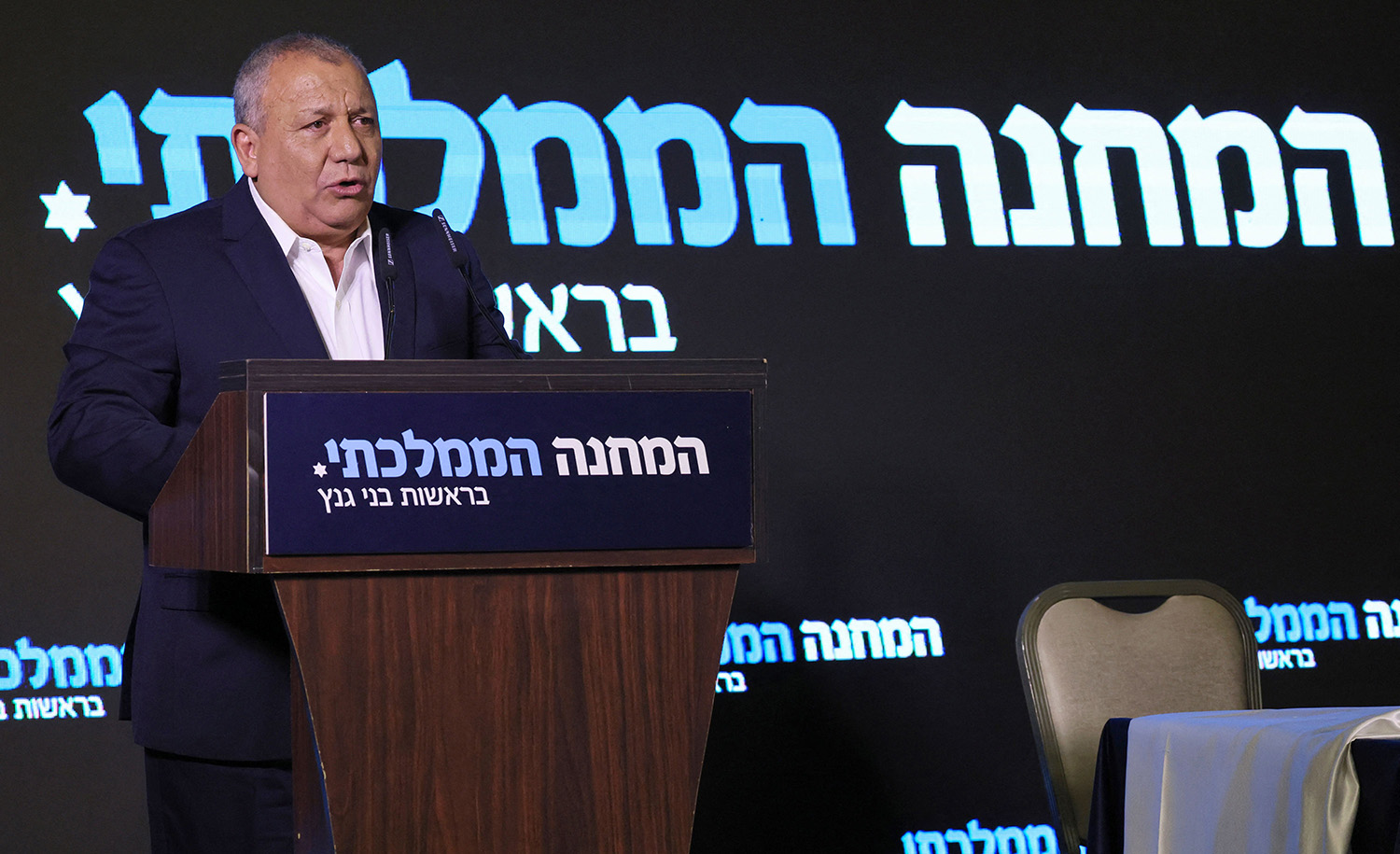 Ha-Maḥaneh ha-Mamlakhti is the new Hebrew name of what was formerly known, in reference to the colors of the Israeli flag, as the Blue-and-White party—the centrist political grouping with eight seats in the Knesset that is headed by former IDF chief-of-staff Benny Gantz. Blue-and-White was renamed after being joined last week by another ex-army chief, the popular Gadi Eisenkot, who made the change a condition for coming on board, and it is now known in English as . . . well, what?

Ha-maḥaneh, as the English-language edition of the Israeli newspaper Haaretz observed in an article headlined “New party chooses a name untranslatable to English,” is “easy enough to translate. [It means] the camp, as in political camp. . . . But ha-mamlakhti, poses a challenge.” (The participle ha-, it should be pointed out, attached to the noun it precedes, is the Hebrew definite article, and adjectives in Hebrew follow their nouns and repeat their articles.) Mamlakhti, Haaretz continued, “loosely translates as civil, centrist, or national, and also has connotations of statesmanlike behavior and non-partisanship. . . . However, the term still proves slippery for anything outside the Hebrew language. The Jerusalem Post originally opted for the State Camp, while the Times of Israel went with the National Camp. The jury at Haaretz was still out [when] a party spokesman finally announced that it would be called the National Unity Party.”

And yet mamlakhtiyut, the noun formed from mamlakhti (both words are stressed on their final syllable), does not mean “national unity,” which is aḥdut l’umit in Hebrew. Can one do better? Trying to answer that involves delving into the two words’ history.

Although mamlakhti and mamlakhtiyut are terms coined in the 20th century, both are based on a biblical word, mamlakhah, meaning “kingdom,” which in turn derives from the root m-l-kh, as in melekh, “king,” and malokh, “to rule.” In the book of Kings, for example, we read how the prophet Ahiah, announcing God’s resolve to punish King Solomon by splitting the Davidic monarchy into the northern and southern states of Israel and Judah,  tells the rebel Jeroboam, “Behold I will rend the kingdom [mamlakhah] out of the hand of Solomon and will give ten tribes to thee.”

The downfall of the United Monarchy was alluded to by David Ben-Gurion when he wrote in a 1936 letter  to the Zionist politician Menachem Usshishkin:

In the time of the First Temple. we always split and fought with each other. And so first Israel fell [to the Assyrians], then Judah [to the Babylonians]. . . . Before the destruction of the Second Temple [by the Romans], too, the Jews were unable to unite. Oblivious to external dangers, they lacked the mamlakhtiyut that might have averted disaster.

Ben-Gurion may not have been the first of his generation to use the words mamlakhti and mamlakhtiyut, but he was the one who used them most often and with whom they were most associated. An early essay of his, published in 1920, was titled “Guidelines to Framing a Mamlakhti Regime in Palestine,” and he saw in the lack of mamlakhtiyut—in the tendency of Jews to turn on other Jews and on their common institutions out of religious or ideological zealotry—a Jewish pathology that, if not overcome, would be as fatal in 20th-century Palestine as it had been 3,000 years earlier in Jeroboam’s time and a thousand years after Jeroboam at the time of the Great Revolt against Rome.

Although this was a trait, Ben-Gurion held, that went back to the period of Jewish independence in antiquity, it had been aggravated by a long exile in which the absence of  sovereignty made it impossible to enforce order or group discipline on the rival elements of the Jewish people. In an essay dating to the first years of the state of Israel, he wrote:

We have brought with us from the Diaspora anarchic and disintegrative habits—a lack of mamlakhtiyut, of national solidarity, and of the ability to distinguish between the essential and the trivial, the permanent and the passing. In renewing its independence, the Jewish people has to confront two encumbering traditions: its problematic sense of mamlakhtiyut in antiquity and the anti-mamlakhtiyut of exilic existence.

During the years of British Mandate rule in Palestine, Ben-Gurion’s socialist Mapai party—and the Histadrut, the powerful labor union that was affiliated with it—were themselves actors in a struggle for dominance between the Zionist left and the Zionist right that lacked mamlakhtiyut in Ben-Gurion’s sense. Yet handed the tools of state power with the establishment of Israel in May, 1948, Ben-Gurion soon made two fateful decisions. The first, in June, was his ordering Menachem Begin’s right-wing Irgun, which had until then been fighting in Israel’s War of Independence as a separate body, to disband, make its fighters join the Israel Defense Force, and surrender its weapons, including arms then being brought from Europe on the ship Altalena. When the Irgun refused, Ben-Gurion ordered the army to open fire on the Altalena, blowing it and its crew out of the water. This brought the country to the brink of a civil war at the very time that it was battling invading Arab armies, but Begin and the Irgun gave in at the last moment and mamlakhtiyut prevailed.

The second decision came in November of that year. Then, with the war against the Arabs still raging, Ben-Gurion ordered the similar disbanding of the Palmach, an elite corps in the IDF, heavily composed of left-wing kibbutzniks, that had an independent command structure of its own. Significant elements in the Palmach were for defying the order. Once again, the new state teetered on the verge of violent rebellion—and once again Ben-Gurion emerged victorious. From then on, the state’s authority was firmly established, although not firmly enough to prevent Ben-Gurion’s political demise in the early 1960s as a result of the so-called Lavon Affair, which saw him defeated by a Mapai leadership that sought to protect one of its own—the former defense minister Pinḥas Lavon, accused of mismanaging and covering up a bungled secret operation—against Ben-Gurion’s insistence that he be put on trial by the state as a matter of mamlakhtiyut.

The State Camp, then, or the State Party, as the Jerusalem Post suggested? That wouldn’t be right, either. At a time when the rancor of identity politics is increasingly setting the tone in Israel, Gantz and Eisenkot are indeed seeking to invoke Ben-Gurion’s legacy—but this was not a legacy of étatism. Ben-Gurion believed in the necessity of the state, but not in unlimited state power, and he never saw the state as an end in itself. Rather, he viewed it as a democratically elected rein on, and antidote to, the factionalism that was the bane of Jewish history. If the Jewish ship of state was not to sink again, it had to have a captain, a crew, and a chain of command whose authority was accepted by all.

“The Ship of State Camp” would be rather ridiculous. But what about the Stateship Camp or the Stateship Party, which is a pun of sorts? That won’t get Gantz and Eisenkot any more votes in November’s election, but it may be a better translation of Ha-Maḥaneh ha-Mamlakhti than any other.

Can Anyone Translate the Name of a New Israeli Political Party?