This week, in Basel, the World Zionist Organization convened to commemorate the 125th anniversary of the First Zionist Congress. What was the original meeting like? 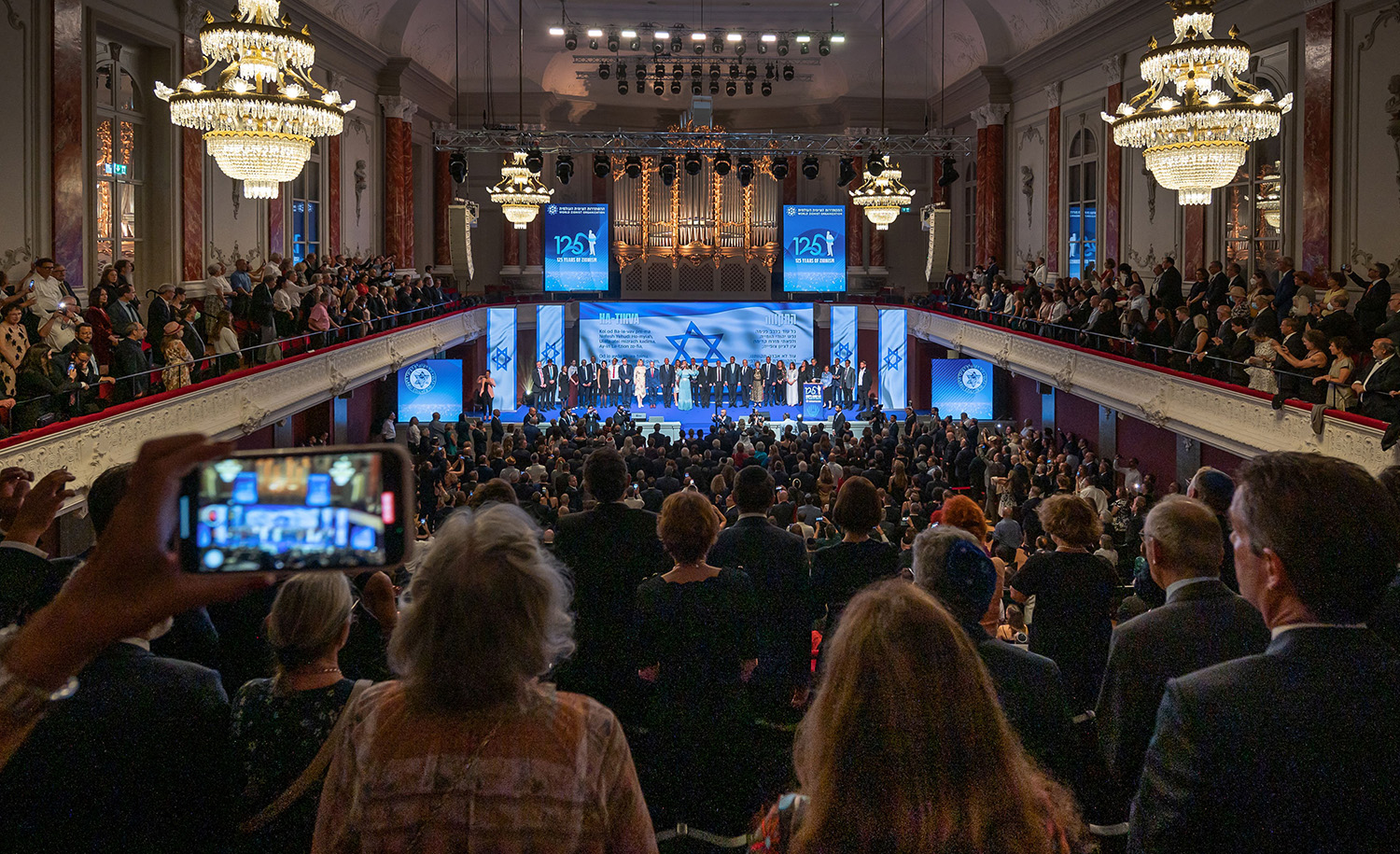 Guests sing the Israeli national anthem at the end of a gala to mark the 125th anniversary of the First Zionist Congress at Basel’s historic Stadtcasino on August 29, 2022. FABRICE COFFRINI/AFP via Getty Images.
Observation
Daniel Polisar and Tikvah Podcast at Mosaic
About the authors


Daniel Polisar is the executive vice-president and a member of the faculty at Shalem College in Jerusalem.

Earlier this week, in the Swiss city of Basel, the World Zionist Organization convened to commemorate the 125th anniversary of the First Zionist Congress, which was the brainchild of one of Zionism’s founding fathers, Theodor Herzl.

At the time, the condition of European Jewry was precarious and degraded. The solution, in Herzl’s eyes, was not to be found in the animating Jewish impulse of the age: assimilation. He thought no amount of assimilation would rid the Jews of anti-Semitism, and that instead only a political solution would work. That political solution of course was to establish political sovereignty in the Land of Israel. As he put it in his opening remarks, “We wish to lay the cornerstone of the house in which the Jewish nation will one day find shelter.”

Our guest this week is the Israeli scholar Daniel Polisar. To him, the early flowerings of that idea in the First Zionist Congress were so significant that the meeting was, to quote the title of an essay he wrote on the subject in 2017 in Mosaic, “the most politically significant meeting of any group of Jews in the last 1,800 years.” Today we revisit that essay, and look back at the First Zionist Congress, how it came to be, and what it aimed to achieve.

Herzl had a revolutionary idea, which I think in retrospect was proven to be correct. He understood that if you slowly build up your population in another country [as the Zionist organization Ḥovevei Tsiyon sought to do] relatively soon the people who are already living there—in this case, the Arabs, backed by the Ottoman empire, which was also Muslim—would realize that you were starting to reach critical mass, and they would just shut the whole enterprise down. So he didn’t think there was a path that went slowly and that ultimately led to sovereignty, but he thought there was an opposite path: that if you could get the Ottoman empire—either of its own accord or because it was pressured by its leading ally, Germany, or its leading foe, Russia, or it was replaced by its leading competitor, Great Britain—if you could get a declaration under public law that this area was going to become a Jewish national homeland, then that would be enough to inspire the Jews and that would be enough to get the locals to understand that this enterprise was going to take off.

To Herzl, the settlers in Palestine were actually an obstacle; he referred to [the settlements], in German of course, as “infiltration.” He saw it as a negative. And so his was the opposite paradigm, and the key plank of the Basel platform that was adopted was that we are seeking to secure a Jewish national home under public law and in a very public, open strategy. An ideologue in Herzl’s situation would have brought his view there and it would have been a blowout and he would have lost a lot of his foot soldiers, and instead of the story being the Jews united behind setting up a Jewish state, the story would have been that the Jews can’t get their act together, they’ve been in exile for eighteen centuries and there’s a reason that they’ve stayed in exile: they don’t have political genius. But Herzl promised the Ḥovevei Tsiyon people that at this conference he would make sure of three things: number one, nothing would be said that could arose the anger of the tsar of Russia, so they knew that he had their backs; number two, nothing would be done that would arose the anger of the sultan who led the Ottoman empire, so the settlers of Ḥovevei Tsiyon would be protected; and [number three] nothing would be said against Baron Rothschild, who was the leading Jewish philanthropist and the biggest backer of Ḥovevei Tsiyon by far.

Even though Herzl’s disciples would have liked to have been much more rabble-rousing and said things about the Ottomans and the Russians and maybe even a negative word or two about Baron Rothschild, Herzl understood that part of the genius of leadership is to compromise, so he brought them together and he gave roles to prominent figures within Ḥovevei Tsiyon; you see that a she-heḥiyanu [blessing] was uttered at the very beginning by somebody from Ḥovevei Tsiyon, and one of their stalwarts at the end got up and thanked Herzl and talked about the distance that they’ve gone. [Herzl] coopts them, and one of the planks in the Basel platform that Herzl would have preferred probably not to have had, but he knew you pay a price when you compromise, was something saying that the existing settlements in Palestine will be strengthened. He got most of what he wanted and that was enough.