Will Israel's Next Government Last Longer than a Container of Hummus?

How the Jewish state found itself going to elections yet again, and what reforms might, at last, bring some stability. 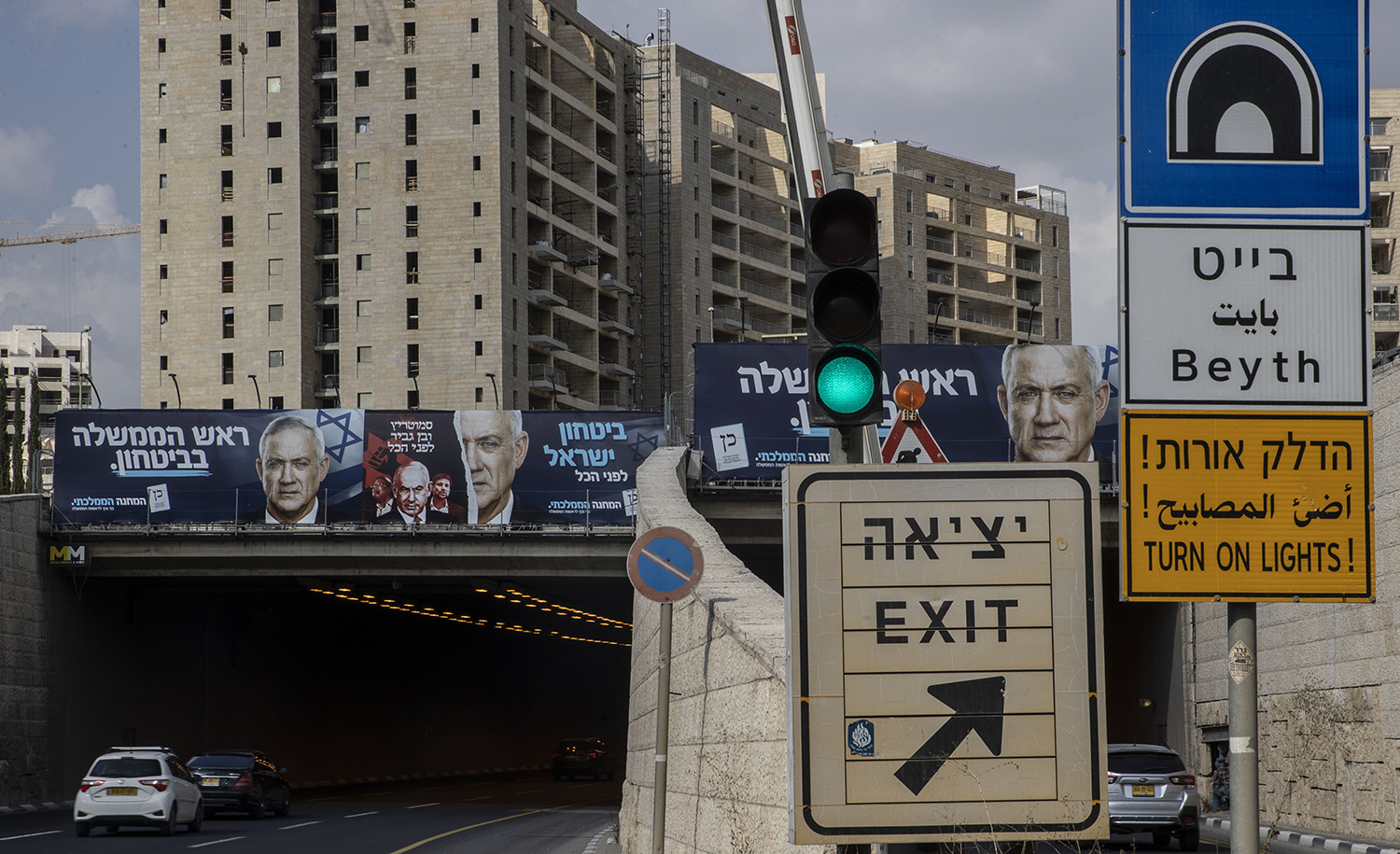 In the end, Britain’s Liz Truss didn’t last longer in 10 Downing Street than the head of lettuce. Soon, we’ll need to start wondering whether the next Israeli governing coalition will last longer than a container of hummus.

This week, Israelis go to the polls for the fifth time in three years. One may hope that this election finally leads to a clear mandate and the construction of a reasonably stable government, probably led by either Benjamin Netanyahu’s Likud or Yair Lapid’s Yesh Atid. More likely, though, we’re in for a dreary repeat of the past few rounds: a virtual tie that either does not permit the formation of any government or else only tolerates one so threadbare and self-contradictory that it will be on life support from the moment it is formed.

If something can’t go on, it might still go on—for a surprisingly long period of time. First-world countries such Belgium, Italy, and Germany have been able to carry on in recent times with weak “caretaker” governments, frequently collapsing governments, or no government at all.

Whatever happens this week, it’s clear the Israeli political system is suffering from a slow-burning systemic crisis defined by the inability to form any strong or stable government. And that crisis is increasingly challenging not only basic governing functions like the budget process but is also now starting to hamper foreign-policy decision making as well.

During the recent thirteen-month trans-partisan government, leading ministers such as Foreign Minister Yair Lapid, and Defense Minister Benny Gantz were, at various moments, quite nearly pursuing separate foreign policies from that of Prime Minister Naftali Bennett on important foreign-policy briefs, including on the Palestinian front and relations with the Gulf States and Jordan. This was bad enough over a period of relative calm, by Israeli standards. Imagine such a dynamic playing out in wartime.

Sure, the phenomenon of the “renegade minister” can occur in even the healthiest political system. But in Israel, this followed inevitably from permitting someone with neither robust party nor popular support into the prime minister’s office. In the 2021 election, Bennett’s party had won only 7 out of 120 seats. The anti-Netanyahu bloc he assembled was composed of parties with dramatically opposed agendas, from the leftwing Meretz to the rightwing Yisrael Beitenu and the Arab welfare party Ra’am. Unsurprisingly, Bennett’s position was incredibly weak.

I have long argued that the root cause of Israel’s political instability is its electoral system: proportional representation (PR). Developments over the last few years have only strengthened that conviction. A quick refresher: Israel allots seats to political parties in its 120-member Knesset based on the absolute vote share a party receives in the national election. A party that gets over a vote threshold currently set at 3.25 percent receives a corresponding number of seats in the Knesset. If the Labor party were to get 10 percent of the national vote, it would get 12 seats, 10 percent of the total.

Israel has always run its parliamentary elections this way. The pre-state assembly of representatives conducted elections by PR. The UN 1947 partition plan that gave conditional approval to a Jewish state in Palestine insisted on a parliament with proportional representation. Since then, this is just how things have been done, though worries about PR date back to the early state as well. Concerned about the weakness of governments under PR, Israel’s first prime minister David Ben-Gurion tried at least three separate times to junk the whole system. Fearing they would be left in the cold, the religious parties in Ben-Gurion’s coalitions told him to get lost.

Proportional representation is usually contrasted with another parliamentary structure known as “first past the post,” which came to the fore in Britain’s Westminster system and is practiced in all the English-speaking countries except the unicorn New Zealand. In first past the post, national territory is divided into districts or constituencies within which party candidates compete for a plurality of votes. (Americans will be well used to it.) In a country using first past the post, a party that receives 10 percent of the national vote may not win many seats at all, and certainly not 10 percent, if its vote is dispersed across the country rather than concentrated in particular locations.

First-past-the-post systems thus tend to marginalize smaller parties and force consolidation under larger ones; this is how America gets its famous two-party system. Under PR, by contrast, parties proliferate, since they can still succeed if they merely mobilize hardcore supporters across the nation. What does this difference mean when it’s time to take power? Countries with first past the post tend to have strong single-party majority governments, though coalitions can sometimes occur. Countries with PR, swimming in political parties, know only multiparty coalitions. (PR and concerns about it both have roots in democratic theory developed in Europe. In a well-known 1936 article, the political scientist F.A. Hermens showed that the system of proportional representation had been the proximate cause of the collapse of the Weimar Republic.)

Thus, even at the best of times, Israel’s system of proportional representation has led to party coalitions that are highly unstable—and highly unstable coalitions mean more elections. Sure, elections in Israel may have reached an absurd number lately, but they have always been more frequent there than in most other nations. Different parties are different parties for a reason; trying to build a government through a “balance of interests” (PR) rather than “majority rules” (FPTP) inevitably produces political instability and governing weakness.

Can anything be done? Proportional representation in Israel has resisted reform for decades and would be even harder to eliminate completely, since the smaller parties in the Knesset would rightly see it as a mortal blow to their independence and electoral prospects. The Knesset has barely been able to come together to pass budgets in recent years, let alone an overhaul of the electoral system which would be a constitutional revolution.

Still, if one squints, one can see a slim chance following this week’s election or the one that will occur in the not-too-distant future, especially if the two larger parties do especially well. Indeed, one could envision a scenario where it is in the mutual interest of both Netanyahu’s Likud and Lapid’s Yesh Atid to collaborate on electoral reform in the direction of first past the post. Doing so would force parties to the left of Lapid to join up with Yesh Atid, and parties to the right and perhaps center of Likud to formally join that bloc. Voila: the outlines of a grand bargain.

Since the chances of this are slim, though, other near-term fixes should be considered. At the Times of Israel, the Mosaic contributor Haviv Rettig Gur recently published a lucid analysis  of recent elections which makes clear that the 3.25-percent national-vote threshold introduced in 2014, which successfully made it somewhat harder for more parties to get into the Knesset, has actually made it harder to form governments, since it makes the fewer small parties that do get in even more capable of blackmailing the larger ones.

As a stop-gap measure, reversing that reform and lowering the threshold again could be something to look at. I do not think, however, that this—in effect increasing proportional representation rather than decreasing it—will fundamentally fix the problem of Israel’s chronically weak and ineffectual governments.

Such a reform would accomplish two things. First, it would inevitably decrease the power that the current system grants small handfuls of MKs to hold the government hostage to their demands; in a larger Knesset, hostage-takers would need a correspondingly larger number of  conspirators. And second, it might help inject young blood in a political system that desperately needs it. Israeli politics has long been described as a gerontocracy. The Western world in general currently suffers from this problem, but the problem in Israel is especially acute. Most prime ministers have been in their seventies. And if you look at the leading political figures in Israel now, almost all of them cut their teeth in the major political battles of the 1990s and 2000s. More MKs might mean a slightly more open political system and more young blood.

Of course, the main reason younger figures struggle to get into the Knesset—or gain any influence when there—is proportional representation. Under PR, party leaders are powerful, since the members of parliament need the support of the leaders rather than any specific group of voters, to get in. And so, the bosses are much more likely to appoint their old friends, who in turn continue to patronize them.

These latter two reforms may be more politically plausible in the short term. There are others that should be contemplated and widely debated. But these five elections in three years have demonstrated that proportional representation is becoming one of the great dangers to the future of the state—on par with the Iran challenge and the disappearance of American power in the Middle East. The dangers of proportional representation must thus be introduced to the Israeli national mind, and the wise men and women of Israel need to get together concrete plans to replace it when the moment is finally ripe.

Will Israel's Next Government Last Longer than a Container of Hummus?