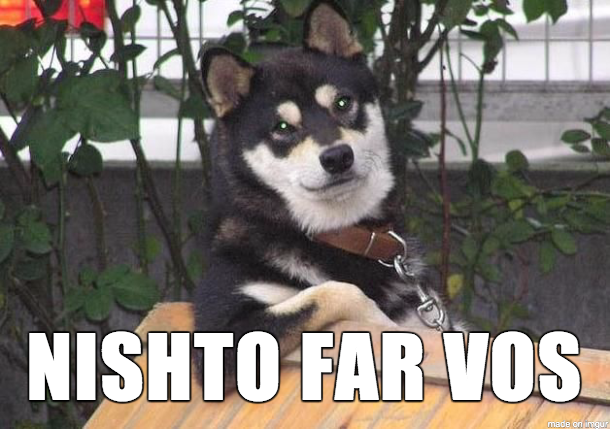 Mosaic reader Paul Socken writes to ask: “How do you say ‘You’re welcome’ in Yiddish?”

There are a number of ways to say “You’re welcome” in Yiddish, just as there are in English (in which, depending on the situation and speaker, one has such additional options as ” My pleasure,” “Don’t mention it,” “Think nothing of it,” “Any time,” “Forget it,” and “No problem,” let alone the ungrammatical but widespread “You welcome”). Probably the most common of these is nishto far vos, literally, “There’s nothing for which,” i.e., “There’s nothing to thank me for.”

Nishto far vos was not originally indigenous to Yiddish, which is probably why my friend Ruth Wisse, the scholar and critic of Yiddish literature, writes me that even though she uses it in Yiddish conversation, she finds it “not very couth.” It entered the language, most likely sometime early in the last century, as a translation of an idiom found in a number of European tongues, such as French il n’y a pas de quoi, Spanish no hay de qué, Russian ne za chto, Polish nie ma za co, and so on. This is no reason, however, to challenge its Yiddish credentials. Although it was probably borrowed from Polish or Russian, the Poles and Russians took their versions of it from French, which quite rightly didn’t bother them at all. Linguistic borrowing is a universal phenomenon for which there’s no need to ask permission or apologize.

Still, Yiddish does offer, as I have said, other alternatives. Indeed, Nahum Stutchkoff’s classic Yiddish thesaurus, Der oytser fun der yiddisher shprakh, lists no fewer than twenty of these. Among them are berotsen, “With pleasure”; mitn gantzn hartzn, “With all my heart”; mitn grestn koved, “It’s a great honor”; zikher, “Sure thing,” and adrabbe. The last, which comes from Hebrew like several of the others, means “On the contrary” and is a shortened way of saying “There’s no need to thank me—quite the reverse.”

Nor is Stutchkoff’s list all-inclusive. While a few of its expressions are rarely used, some common Yiddish ways of saying “You’re welcome” are missing from it. One of these is zol es aykh voyl bakumen, literally, “May it be received well by you”—in other words, “Enjoy it.” Another is zol aykh zayn tsu gezunt, “May it be for your health,” which can be abbreviated to tsu gezunt. Neither of these phrases is an all-around substitute for “You’re welcome.” You might use either if you were thanked for giving someone a gift, taking him or her out to dinner, or even passing the saltshaker, but for holding an elevator door open, nishto far vos would be more natural. It’s all a matter of context, though. If the door is being held for the rabbi of your synagogue or your daughter’s nursery-school teacher, mitn grestn koved would be just fine.

“You’re welcome” or its equivalents are generally optional in all languages. If I perform a kindness for you and you fail to say “Thank you,” I’ll consider you rude; but if I don’t respond to your thanks with a phrase of my own, you’re unlikely to think the same of me. There’s a limit in every culture to how long two people have to go on being demonstratively polite, and “You’re welcome” seems to represent that limit pretty much everywhere. No language that I know of has a rote expression that means, “I appreciate your saying ‘You’re welcome.'” The appreciated person might then have to express his appreciation at being appreciated, and where would it ever end?

Are there languages in which there are no expressions like “You’re welcome” at all? Probably not, although I’m told that in Japanese the proper response to “Thank you” is either “No, no” or “Thank you,” since anything suggesting that the thanked party thinks he deserves gratitude for an ordinary act of human courtesy would be considered haughty and even impolite. Before we categorize this as exaggerated, we might consider that nishto far vos, or the English “Don’t mention it,” are not very different. Here, too, we are saying, “There’s really no need to thank me, I haven’t done anything that calls for it.”

Expressions of politeness are often interchangeable, as “Thank you” and “You’re welcome” are in Japanese, because they’re all ways of saying, “Let’s be nice to each other.” This is why, for example, a word like the Italian prego can mean “You’re welcome,” “Please” (as in “Please come in”), and “Excuse me” (as in “Excuse me, is this seat taken?”), and why you can have a conversation in German that goes:

“Möchten Sie eine Zeitung?” (“Would you like a newspaper?”)

Bitte comes from the verb bitten, to ask, beg, or entreat, which is close to beten, to pray, just as prego comes from pregare, which means all those things; both resemble the archaic English “prithee,” a contraction of “I pray thee,” whose functions were identical. (So, as a result of German influence, are those of Hebrew b’vakashah, which originally meant only “Please.”) And if you’re looking for one more way to say “You’re welcome” in Yiddish, bitte is perfectly acceptable, too. It’s no less couth than nishto far vos.