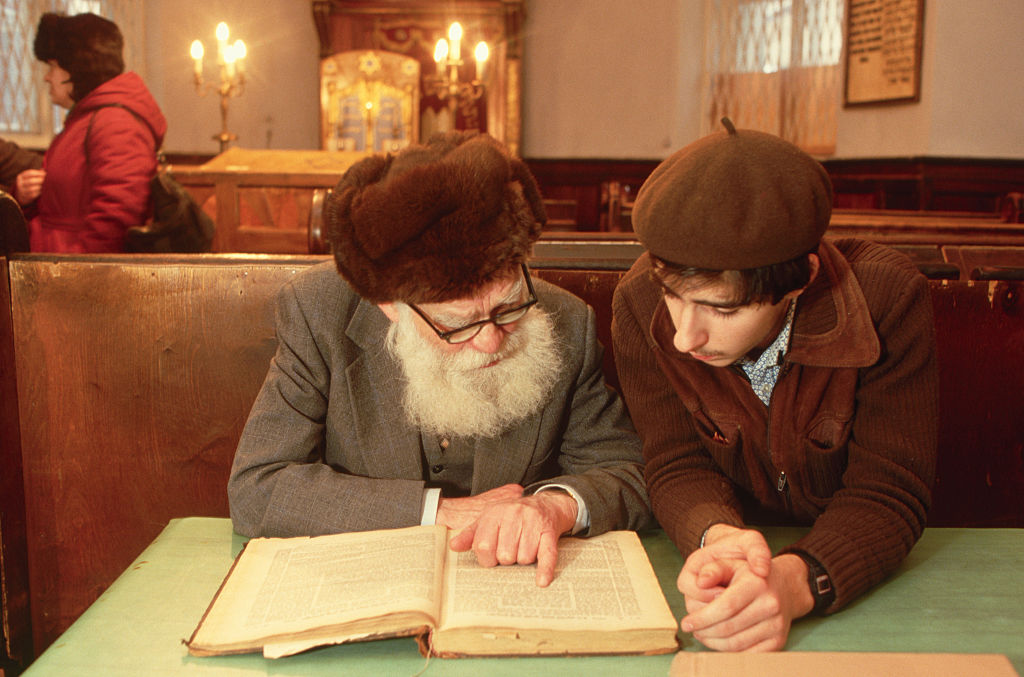 A young man studies with an older one in a Moscow synagogue. Photo by Peter Turnley/Corbis/VCG via Getty Images.

The Soviet Union was deeply against religion, and in particular was deeply against Judaism, so that the full embrace of Jewish religious observance, or the study of Hebrew, or the slightest approval of Zionism were often seen as criminal offenses against the state. Some Jews, like Natan Sharansky, resisted—brave refuseniks who wouldn’t give in to enforced secularization and who organized underground networks of Jewish life. Eventually, through American and international pressure, the Soviets allowed those desperate Jews to leave. But what of the Jews who didn’t flee, who remained in Russia even after the demise of the Soviet Union? What is their story?

David Rozenson, the executive director of Beit Avi Chai, a Jewish cultural center in Jerusalem, was born in the Soviet Union before his family escaped to the United States. Years later, as an adult, he returned to Russia and stayed there for years. On this week’s podcast, in conversation with Mosaic editor Jonathan Silver, he tells his family story, and explains why, despite his parents having risked so much to leave, he chose to go back and serve the Jews of the former Soviet Union.

There was this attempt to uproot that whole class system and create a society where everybody was of the same class. Initially many of the people who were part of this, paradoxically so, were Jews. The idea was that the Jewish community needed to, on one hand break, out of this kind of very closed environment in these shtetls, where it didn’t have the opportunity to study [secular subjects] and it didn’t have the opportunity to get a proper education; it was the ḥeder system that went back hundreds of years. So on the one hand, Communism, this whole sense of revolution of fighting against this master, enabled Jewish people to rebel not only against this class society but also against this kind of Jewish claustrophobia that many of the young people were feeling―they wanted to fight for something.

Paradoxically, many of us live in societies which are free and allow us to practice religion the way we want, practice our traditions the way we want, but many of the children of the religious communities who became Communists, very ardent Communists, in a sense traded Jewish religion for Communism. It gave people a purpose, it gave the youth a purpose, and many Jews were involved in that revolution. Communism, in many ways, dovetails with a lot of ideas in Jewish life; the sense of people being equal, the sense of there’s a class but it should serve the people, and many of the people believed that actually Communism and Judaism have many ideas in common.