Only in Schopfloch, as far as I know, have a large number of originally Jewish words survived in the speech of the local populace to this day. 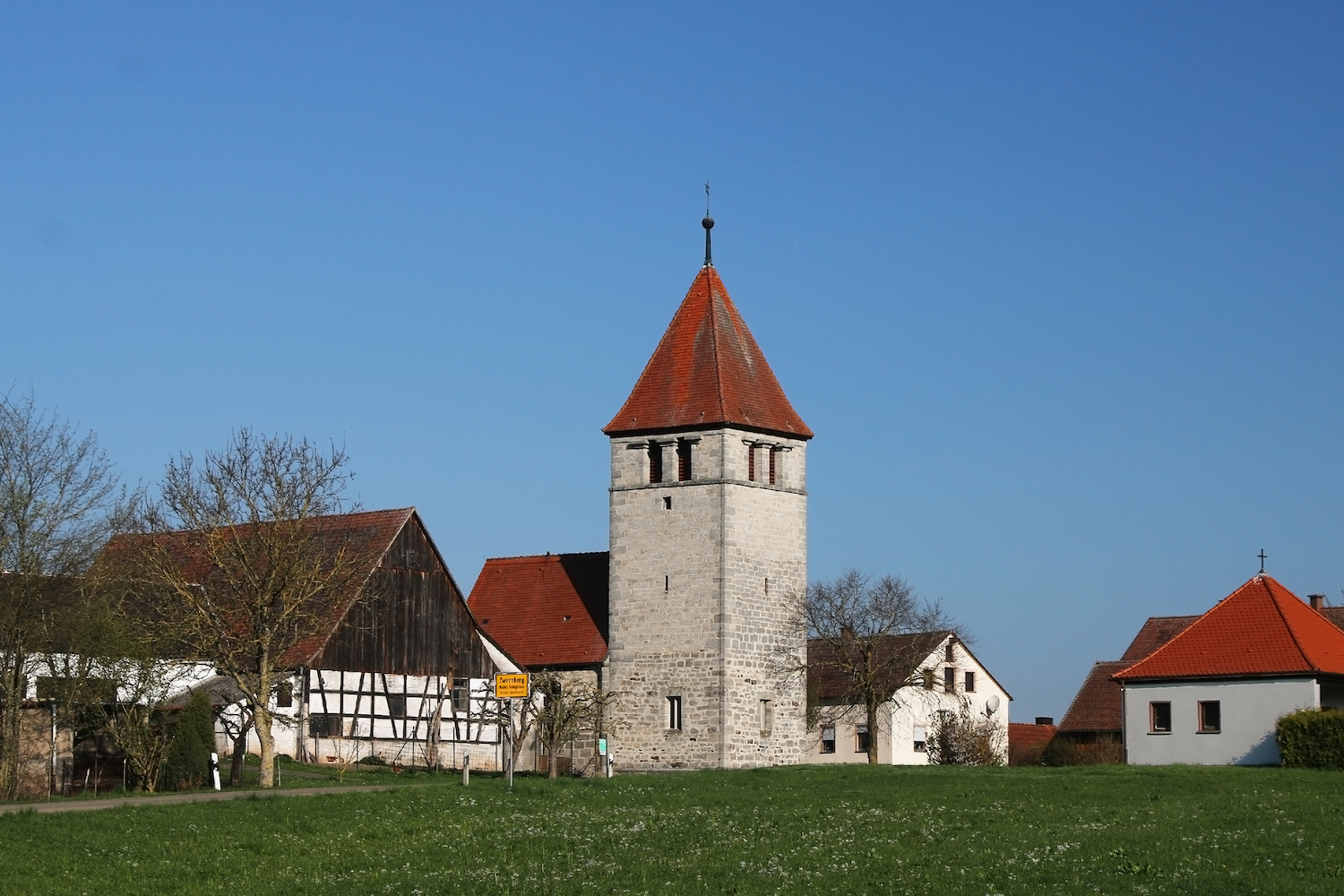 A church in the town of Schopfloch, Bavaria, Germany. Shutterstock.

I recently came across a post on Facebook about a Jewish language that is still spoken by the non-Jewish inhabitants of a village in Bavaria called Schopfloch. It’s in German, but if you can read it, you may find it of interest.

I read the Facebook post that Ms. Goldstein sent me. It’s about a local Bavarian isolect of German, hardly a separate “language,” that is known to its speakers as Lachoudisch and that is replete with Hebrew and Hebrew-derived words. Lachoudisch was written about in a New York Times article in 1984, has been discussed in various other places, and is the subject of a slim German book (of which I unfortunately don’t possess a copy) published in 1998 by a former mayor of Schopfloch, Hans Rainer Hoffmann, as Lachoudisch sprechen: Sprache zwischen Gegenwart und Vergangenheit (“Speaking Lachoudisch: A Language Between Present and Past”). Its existence is thus hardly fresh news.

And yet Lachoudisch is fascinating, and of the 60 or so of its words listed in the Facebook post, many were new to me. Of those that weren’t, some were familiar from shorter Lachoudisch word lists that I’ve seen (for instance, jajem, wine, from Hebrew yayin; keileff, dog, from Hebrew kelev; lächem, bread, from Hebrew leḥem, and so on); others were known to me from argots like Rotwelsch, a now extinct German thieves cant with a large input of Jewish vocabulary. This vocabulary, like that of Lachoudisch, came largely from the West European Yiddish that was widely spoken in Germany, the Netherlands, Switzerland, and elsewhere well into the 19th century,

Lachoudisch might indeed be considered a variety of Rotwelsch except for the fact that it originated not, like the latter, in an underworld that had Jews among its denizens but with generations of Jewish cattle dealers who inhabited Schopfloch until the Nazi period and influenced the speech of their non-Jewish neighbors. The cattle trade was a heavily Jewish occupation in rural Germany and Schopfloch was by no means the only place in which such a thing happened. Yet only in Schopfloch, as far as I know, have a large number of originally Jewish words—some 200, according to estimates—survived in the speech of the local populace to this day.

In fact, it is possible to speak entire sentences in Lachoudisch of which hardly a word would be comprehensible to a non-Schopfloch resident. Our Facebook post gives the example of Am schomajem nefiches joum halchen ani in jaroke, translated by it into standard German as Am Himmelfahrtstag geh ich ins Grüne, “On Ascension Day I go off into nature.” Ascension Day is a Christian holiday, observed 40 days after Easter, that commemorates Jesus’ transportation to Heaven, and the words in the Lachoudisch sentence include schomajem, from Hebrew shamayim, sky or heaven; joum, from Hebrew yom, day; halchen, from the Hebrew verb halakh, to go; ani, the Hebrew word for “I”; and jaroke, from Hebrew yarok, green or greenery. This accounts for everything but nefiches—and with your permission, I’ll put off nefiches to the end of this column to let Lachoudisch have the last laugh.

There hasn’t yet, you say, been a first laugh? Actually, Lachoudisch has a good sense of humor. One illustration of it in the Facebook word list is Mizwefresser, literally, a “mitzvah gobbler”—that is, someone deemed overly religious or devout. While the Jewish roots of the word are obvious, all contemporary Mizwefressers in Schopfloch are Christians and it’s unlikely that any Schopflochians even know what a mitzvah in Judaism was.

Or take Schabbesdeckel, a “Sabbath lid,” i.e., an old hat. Presumably, such hats were once called that because they were clamped on the heads of Jews going to synagogue on Shabbat and kept well-preserved in the closet the rest of the week, thus giving them a measure of longevity. Although there is no longer any Shabbat in Schopfloch, Christian Schabbesdeckels may well still exist.

Some of Lachoudisch’s compound words are puzzling, like its term for potatoes, Ereztapuchim. It’s easy to see that this is a combination of Hebrew eretz, earth, and Hebrew tapuḥim, apples, which makes it a translation of Erdäpfel, “earth apples,” an old German term for potatoes (they are generally called Kartoffeln) that still has some currency in southern Germany and Austria. Also the literal meaning of French pommes de terre, this was a natural way of referring to the strange round tubers introduced into Europe after the discovery of the Americas, and eventually, standard Hebrew adopted the usage, too, and began calling potatoes tapuḥei adamah, from tapuaḥ, apple, and adamah, earth or soil.

That Lachoudisch speakers did something similar while preferring a different Hebrew word for earth, eretz, which also means “land,” is not surprising; both eretz and adamah are found in everyday Hebrew blessings for food, and eretz, which occurs in the blessing for bread, may have seemed more appropriate because both bread and potatoes are starchy. But in proper Hebrew, in which genitive constructions put the possessed before its possessor, eretz tapuḥim means “land of apples,” not “apples of the earth.” Were the coiners of this Lachoudischism so ignorant of basic Hebrew grammar? Or were they having fun by jokingly forcing the Hebrew words into a German mold? It’s hard to say.

An even more puzzling case, at first glance, is Seifelbajis, defined by the Facebook post as “toilet.” A sefel in modern Hebrew is a cup or mug, and bajis (the German “”j” is sounded like an English “y”) is the Ashkenazi form of Hebrew bayit, a house, so that in a normal Hebrew genitive construction this would give us “house cup.” Yet even if one turns it around so that the meaning is “cup house,” why should that be a word for a toilet?

One has to go to the Bible for the answer—or rather, to several Bibles. In the sixth chapter of the book of Judges, we are told how Gideon wrung enough dew from a bunch of wool to fill a sefel, a word translated by the rabbinically authoritative 2nd-century Aramaic Targum as lakna, a flask or bottle. Not that “flask house” or “bottle house” should denote a toilet any more than does “cup house.” But look at Martin Luther’s translation of this verse and you’ll see that sefel is rendered by him as Schale, a basin—and “basin room” (Hebrew bayit can refer to any structure, not necessarily a house-size one), be the receptacle in question for voiding oneself or washing oneself, would fit the meaning of toilet very well. One need only posit that the speakers of Lachoudisch were familiar with the Luther translation, a reasonable assumption considering that it was the canonical German Bible for centuries, very much like the King James in English.

The word Lachoudisch itself, I might observe, has commonly been derived from lashon ha-kodesh, “the holy tongue,” a common Hebrew epithet for Hebrew. And yet this seems doubtful, for even if such a name had been given to the argot of Schopfloch in jest, there is no explaining phonetically how lashon ha-kodesh would turn into “Lachoudisch.” While initial Hebrew ḥ, transliterated in German as “ch,” becomes a k in Lachoudisch (hence, such Lachoudisch words as koule, “ill,” from Hebrew ḥoleh, and Kaseerem, “pig,” from Hebrew ḥazir), a k never becomes a ch. More probable is the suggestion that Lachoudisch comes from Schopflochjüdisch, “Schopfloch Jewish [speech],” with the loss of the initial Schop and the f of “floch.”

Which leaves us with the unfinished business of nefiches (pronounced “neh-FEE-khes”). This is the Ashkenazi plural form of the Hebrew word nefiḥah, which denotes a passing of gas—or, in plain English, a fart. If you can’t see what this has to do with Ascension Day, neither did I at first. But then it came to me that the German word for “fart” is Furz (pronounced “foorts”), which makes Himmelfahrtstag, “The Day of Journeying to Heaven,” sound very much like Himmelfurztag, “The Day of the Heavenly Fart.” Schomajem nefikhes joum is thus a bilingual Jewish pun, and not a very nice one from a Christian point of view. When you reflect that this is how Schopflochians still call the Christian holiday, you’ll see that Lachoudisch has indeed had the last laugh.