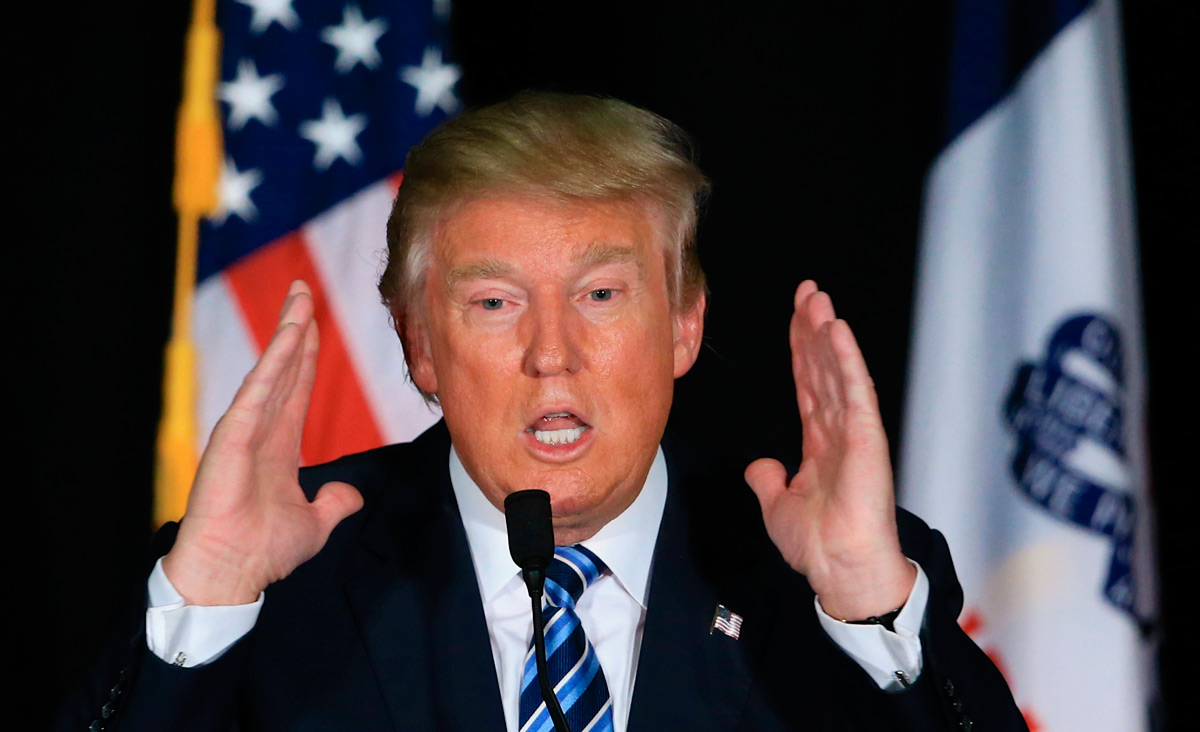 Having been involved in my previous two columns with the love of neighbors, I had no chance until now to participate in the great controversy over Donald Trump’s Yiddish. Perhaps this is just as well, because now that the furor has abated over what exactly Trump said, meant to say, thought he had said, or should be blamed or not blamed for saying when he remarked on December 21 that Hillary Clinton was “schlonged” in her 2008 primary loss to Barack Obama, it is possible to make a few summarizing observations.

The first of these is that Trump was almost certainly not guilty of the deliberate sexual innuendo that he was widely accused of making. Although all of his detractors knew that “schlong” was a slang term, originating with American Jews, for a penis, few were aware that, used as a verb, it had the additional meaning, especially in Trump’s native New York City, of to beat someone soundly in an athletic contest. As pointed out by the Forward‘s veteran columnist J.J. Goldberg, hardly a Trump enthusiast:

“Schlonged” isn’t just “schlong” plus “-ed.” I grew up in Long Island in the 1950s and 60s, not far from Trump’s Queens neighborhood and around the same time. Where we lived, “schlonged” was an utterly commonplace term meaning “clobbered” or “thoroughly defeated.” It gained particular currency after the New York Mets set up shop [and] had nothing to do with male anatomy, at least not in the mind of anyone I knew.

Several other born New Yorkers have corroborated this, and I myself, though a decade older than Goldberg and a Giants fan in what were pre-Mets days, can remember the word being used this way among my high-school friends. (We did not, to the best of my memory, use “schlong” in the sense of penis—for which other words were not lacking.) This is hardly to say, of course, that there is no connection between the two meanings. In many languages, for unfortunately obvious reasons, words for having sex can also denote abusing, taking advantage of, or getting the better of someone. “F—k” is an excellent example. And indeed, there is no more a sexual innuendo in a sentence like “They really f—ked us by giving the contract to another company” than there was in Trump’s “schlonged.” A word’s origins do not necessarily tell us anything about how it is being used in specific situations by contemporary speakers.

Which is why, though it has time and again been described as such in the media, it makes no sense to refer to “schlonged” as Yiddish. Not only did East European Yiddish have no such verb as shlangen, it is far from clear that it ever had a word shlang meaning penis. A shlang in Yiddish is a snake, as is a Schlange in German, and while the word can also denote a nasty or vile person, it does not seem ever to have had a sexual connotation.

It’s not impossible that, unknown to us, there was some regional variety of Yiddish, brought by its speakers to the United States, in which shlang did mean penis, but it’s more likely that the word was first given this meaning by the American-born children of Yiddish-speaking immigrants. (Nor is it a mystery why this might have happened, snakes being universal phallic symbols.) Whichever was the case, however, “to schlong” in the verbal sense of “to cream” or “to shellac” must be considered an English word with a Yiddish derivation, much as, say, “to shellac” is an English word with a French, and ultimately part-Sanskrit, derivation. (It goes back to “shell lac,” a translation of French lac en écailles, lac being traceable to Sanskrit laksa, red dye.)

This is also why poking fun or taking offense at Trump’s allegedly faulty Yiddish, another widespread reaction to his use of “schlonged,” was absurd. He was not being, as Justin William Moyer wrote in the Washington Post, “a Gentile who, linguistically, may have wandered too far from home.” Neither was he, as the renowned Harvard cognitive scientist Steven Pinker suggested, one of “many goyim [who] are confused by the large number of Yiddish terms beginning with ‘schl’ or ‘schm.'” And while Miriam Isaacs, a Yiddish language professor, certainly had the right to think that “Everything [Trump] says is disgusting and he intends it to be disgusting,” her remark that “So often Yiddish is the butt of jokes or silly words—I have little patience with that anymore,” as much as it can be sympathized with, has no applicability to Trump’s “schlonged.” Trump did not think he was using Yiddish, much less making a joke of it. He thought he was speaking English, and he was.

Indeed, if anyone was making Yiddish the butt of silly jokes, it was some of his critics. Thus, also in the Washington Post, Dana Milbank reacted to Trump’s December 21 speech with “Oy vey iz mir! What a putz!” and concluded by citing “the greatest Yiddish aphorism of all: ‘Du kannst nicht auf meinem rucken pishen unt mir sagen dass es regen ist.’ You can’t pee on my back and tell me that it’s raining.” Although it’s hard to believe that anyone could make eight or nine mistakes in a single sentence of this length, that’s exactly what Milbank, who doesn’t seem to know the difference between Yiddish and German, managed to do. (“You can” in Yiddish is du kenst, not “du kannst”; “on” is af, not “auf”; “and” is un, not “unt”; “to say” is zogn, not “sagen”; “that it’s raining” is az es reygent, not “dass es regen ist”; etc., etc.)

Does it matter? Not, perhaps, if you’re one of the many people who wouldn’t vote for Donald Trump even if he were running against Donald Duck. Sometimes, though, even putzes deserve a break.