Thinking about Charlottesville and the Jews

Today’s homegrown Nazi threat, seen in Charlottesville last weekend, is grossly incommensurate with yesterday’s Nazi threat—which relieves no one of the duty to respond. But how? 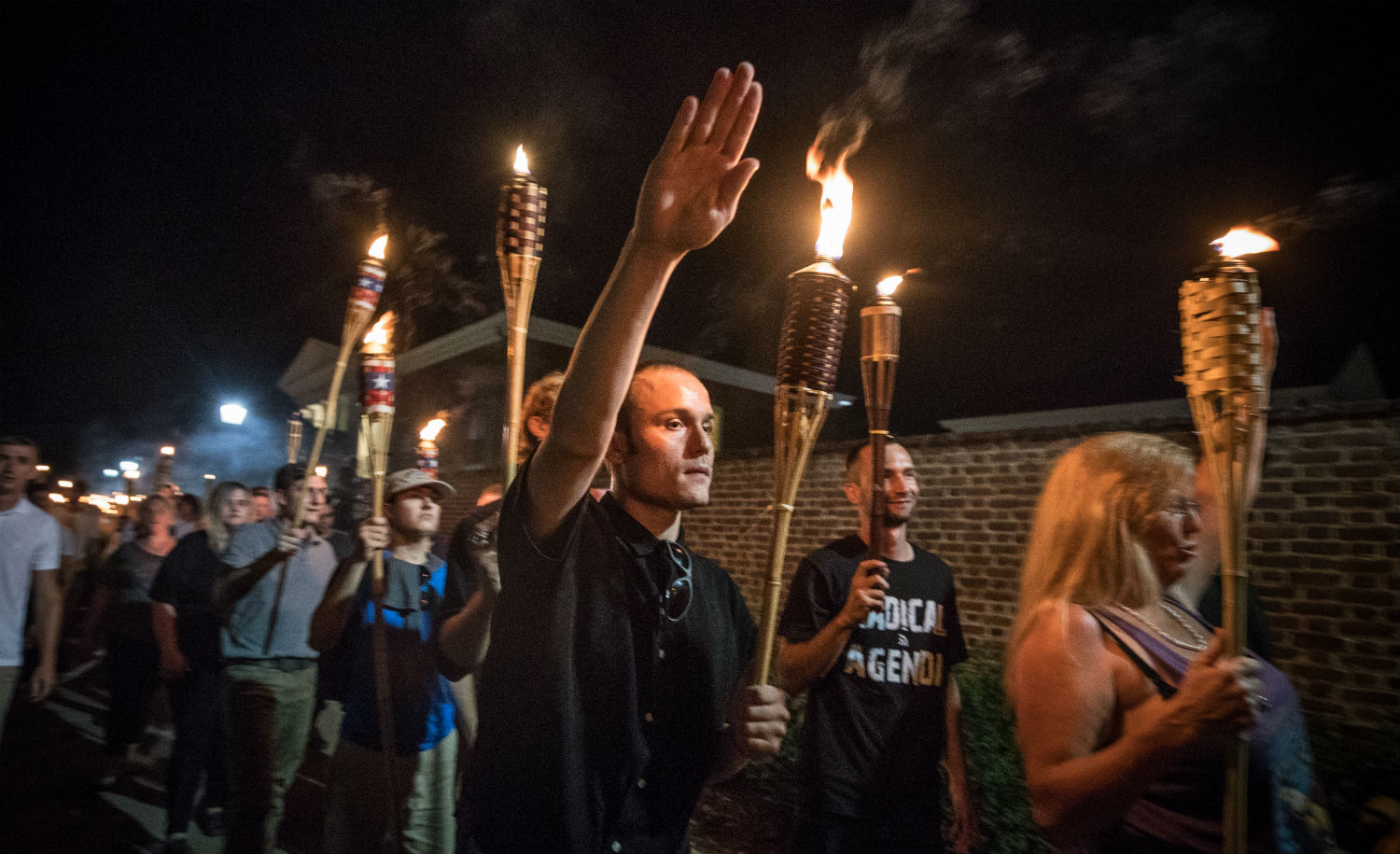 Observation
Stephanie Cohen
About the author


Stephanie Cohen is a writer living in New York.

In Charlottesville, white supremacists marching last weekend had one group on their minds—Jews. “Jews will not replace us,” they chanted, along with other Nazi and neo-Nazi slogans. Afterward, one of my Facebook friends asked people to post pictures of fathers, grandfathers, and great-grandfathers who had fought against the real Nazi regime. I couldn’t help thinking of my own grandfather.

Russell Willis Ingersoll was not a military man by any stretch of the imagination. He was a house painter and sometime taxi driver in Peekskill, NY, who never attended college or entertained big career ambitions. But he played his own part in the great struggle in Europe. Drafted in 1940, and qualified as a driver, mechanic, and cook, he was attached to the 170th field-artillery battalion and shipped to Europe to serve in the Rhineland campaign in 1944 and 1945.

My grandfather could not have known then that one day he would have four Jewish great-grandchildren—he passed away before I met my Jewish husband and long before any of them were born. But he did know that he was one more American who helped annihilate Hitler and undo the Nazi plague. His discharge papers cited his “honest and faithful service to this country”: service demanding that men cross an ocean to save the West from a new dark age by putting themselves between a great evil and its next targets.

A node of that same evil—along with its tired, twisted, pathological diatribes—came to Charlottesville last weekend in the form of a band of white supremacists, equipped with a permit to rally and express their opposition to the planned removal of a statue of Confederate General Robert E. Lee. They were met by a band of counter-protestors determined to stop them, and a riot ensued. Very rapidly, a curtain was peeled back to reveal—with seeming irrelevance but, to anyone historically informed, piercing resonance—full-blown anti-Semitism. In song and chants, “the Jews” became a target of vilification by armed thugs bearing tiki torches in a nighttime show of force.

As the president of Congregation Beth Israel, a Reform temple in Charlottesville, would subsequently write, the possibility of greater anti-Jewish violence had already been anticipated. When “Nazi websites posted a call to burn our synagogue,” the rabbis and staff hired an armed guard for the building and transferred the synagogue’s Torah scrolls offsite for safekeeping. In the event, the scene outside and elsewhere in town inevitably brought to mind Kristallnacht in 1938, when the Nazis torched Jewish homes, businesses, and houses of worship across Germany. This time many of the torch bearers wore brown pants, not brown shirts, but the image was eerily evocative.

The president describes the scene the next morning, during Sabbath services:

For half an hour, three men dressed in fatigues and armed with semi-automatic rifles stood across the street from the temple. . . . Had they tried to enter, I don’t know what I could have done to stop them, but I couldn’t take my eyes off them, either. Perhaps the presence of our armed guard deterred them. . . .

Several times, parades of Nazis passed our building, shouting, “There’s the synagogue!” followed by chants of “Sieg Heil” and other anti-Semitic language. Some carried flags with swastikas and other Nazi symbols.

A guy in a white polo shirt walked by the synagogue a few times, arousing suspicion. Was he casing the building, or trying to build up courage to commit a crime? . . . Later, I noticed that the man accused in the automobile terror attack [that killed Heather Heyer and injured nineteen others] wore the same polo shirt as the man who kept walking by our synagogue. . . . Even now, that gives me a chill.

A few years ago, on a beautiful summer day in Washington DC, my husband and I found ourselves suddenly trapped in the midst of a massive anti-Semitic, anti-Israel rally organized by the left-wing Answer coalition. We had gone out for a walk with our four very young children and their nearly seventy-year-old grandmother. One of our sons was wearing a tee-shirt with Hebrew lettering visibly on display. Almost out of nowhere there were masked men, a burning Israeli flag, huge crowds, ugly signs (“ISRAEL KILLS CHILDREN,” etc.), police sirens.

We didn’t confront the chanting, screaming, hopped-up haters. Instead we grabbed our frightened children and pulled them into a parking garage; then, winding in a roundabout fashion through town, we made our way back to our hotel. Afterward I learned that a small, peaceful group of pro-Israel demonstrators had to be evacuated in police vans for their safety.

I know what it means, abstractly, to make a decision about when to stand up and when to seek cover. We always want to believe that, in another age, we would have done the right thing, found the courage, confronted an evil that hadn’t yet grown to its full strength. But would we stand up and fight back if the threat weren’t locked comfortably away in the pages of a history book but was right in front of us in our hometown—in, for instance, Charlottesville?

In an op-ed piece for the New York Times, Siva Vaidhyanathan, a local professor at the University of Virginia, recounted his conversation with his wife over whether to go downtown to the march and fulfill their promise to themselves to stand with neighbors under threat. The article is an honest reflection on what we do and how we act when our values are threatened but we ourselves are not, when we see evil on the march but not directed explicitly against us. Do we stay home or do we fight back? We could get hurt. They could have guns. We have children and responsibilities to them.

All of these things, surely, millions of people said in Germany during the 1930s. In part because of their silence, my grandfather became one of 16.1-million Americans who served in the war to defeat Nazism, three-quarters of them overseas. Thankfully, today’s Nazi threat here, at least, is grossly incommensurate with yesterday’s there, a speck not a tidal wave. This, however, relieves no one of the duty to respond. For ordinary citizens, the moral conundrum remains, but for local and national authorities, charged with standing between evil and its next targets, the matter is different. Just as the actual threat is still small, containable, but deadly serious, so the response needs to be tailored accordingly: prudent, measured, but swift and above all implacable—including, as and where necessary, by the meeting of violence with overwhelming legitimate force.

Thinking about Charlottesville and the Jews