What's Behind the Resurgence in French Anti-Semitism

A new book forthrightly stares the various brands of French anti-Semitism in the face. Whether the author succeeds in placing them in their proper context is another question. 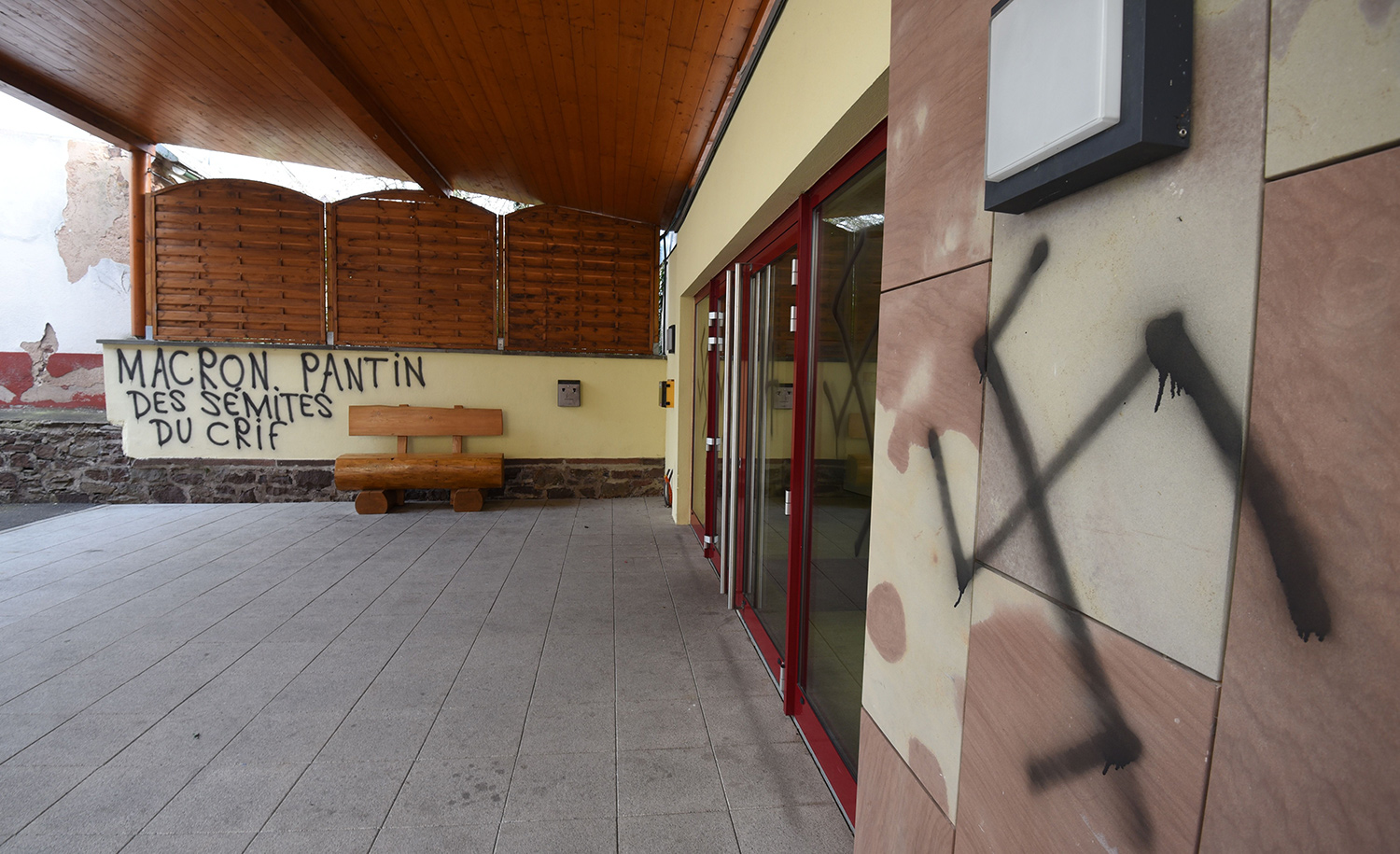 Anti-Semitic graffiti on the wall of the city hall in Heiligenberg in eastern France. PATRICK HERTZOG/AFP/Getty Images.

“Today I no longer have full confidence that anti-Semitic hate crimes in France are handled properly.” Thus, in a recent interview, lamented Sammy Ghozlan, a former French policeman who now runs France’s National Bureau for Vigilance against Anti-Semitism.

Government officials, Ghozlan said, hesitate to apply the anti-Semitism label even when there is clear justification for it. One such occasion, by now notorious, was the 2017 murder of Sarah Halimi, a sixty-six-year-old Jewish woman beaten in her home by a Muslim man with a history of drug use, casual anti-Jewish insults, and a troubled psyche who was heard yelling “Satan” before throwing Halimi from her balcony onto the pavement several stories below. In covering the murder, the French national press took weeks to mention anti-Semitism. At the trial of the accused in court, Halimi’s Jewish identity was instead determined to have “clashed with [the killer’s] delirious state of mind”—so testified expert psychologists—and therefore could not itself have been the rationale for her murder.

There are many similar cases, Ghozlan observes, in which the perpetrators’ anti-Semitic “delusions” have led courts to decline to sentence the accused. Take the case of Mohammed Merah, the Islamist who in 2012, two years before the brutal murder of Sarah Halimi, killed seven people in Toulouse including a rabbi and three Jewish schoolchildren. Merah had suffered physical abuse as a child and was routinely exposed to Islamist anti-Americanism and anti-Semitism. His disturbed upbringing resulted in a young adult with a host of mental-health problems—enough, evidently, to persuade French officials to categorize him as a “lone wolf” whose situation was too particular to be linked to anti-Semitism, let alone to broader societal trends like Islamism.

“If you drive intoxicated, the judiciary considers this an aggravated element, you get a stiffer sentence,” Ghozlan notes bitterly. “But apparently if you kill a Jew under the influence, you may not stand trial at all.”

The Halimi incident receives extensive treatment in a new book, Hate: The Rising Tide of Anti-Semitism in France (and What It Means for Us), by the French journalist Marc Weitzmann. In it, Weitzmann attempts both to describe the nature of French anti-Semitism and to explain why so many French officials and journalists ignore, downplay, or deny it.

Offering a wide-ranging—sometimes too-wide-ranging—account of French politics over 150 years, Weitzmann draws lessons from forgotten history to make sense of France’s present encounter with the world’s oldest hatred. In doing so, and in stark contrast to the French government and media, he forthrightly stares the Islamist brand of anti-Semitism directly in the face. Whether he succeeds in placing it in its proper historical context is another question.

As Weitzmann reminds us, anti-Semitism itself is hardly new to France, which notoriously expelled all of its Jews in 1394. In the modern period, and especially in the last two centuries, anti-Semitism has often been associated specifically with French attitudes and policy toward Islam. Weitzmann relates the role played in this process by 19th-century French reactionaries who converted to Islam in their search for an “authentic” alternative to rationalist Enlightenment liberalism. In France’s newly-conquered Algeria, discontented heirs of the post-Revolution civic order identified in Islam a substitute for Napoleonic secularism. An added attraction was the Islamic world’s rough treatment of its Jewish populations, which stood in contrast to France’s revolutionary emancipation of the Jews in 1791.

There were, to be sure, unanticipated consequences to the implementation of such reactionary ideas, and Weitzmann does not scant them. In petitioning the French colonial regime to exempt Muslims from Napoleon’s Civil Code, the local Islamic elite and its French fellow travelers intended to protect the full practice of Islam—including polygamy—from the legal strictures of French secular modernity. But as the colonial government entrenched itself in Algerian society, separate legal status for Algerian Muslims inevitably morphed into second-class status, lighting a fuse at the end of which was the mid-20th-century explosion against French rule.

Of course, the 19th century is not determinative of subsequent developments, and more recent events present their own complexities. And yet, Weitzmann writes, certain habits of mind persist, as do their unintended consequences. Thus, today, French officialdom and French opinion leaders look askance at linking anti-Semitic incidents to Islamism out of fear that doing so will only worsen existing “social divisions.”

But if the goal of France’s caution has been to avoid exacerbating the problem of Islamist anti-Semitism, it is difficult to find evidence of success. According to a July 2018 report on the French situation in the New York Times, “Nearly 40 percent of violent acts classified as racially or religiously motivated were committed against Jews in 2017, though Jews make up less than 1 percent of France’s population.” In 2018, anti-Semitic acts increased by nearly 75 percent.

What explains the recent upsurge? According to Weitzmann, today’s brand of anti-Semitism was nurtured by post-cold-war disillusionment, as the stories France had told itself about its allegedly heroic behavior in World War II—stories reinforced by postwar French presidents from Charles De Gaulle to François Mitterrand—ceased to resonate. An early harbinger was the May 1968 “events”—a wave of revolutionist fever, general strikes, and student occupations of universities that shook the nation to the core. Later blows to the national self-image were, if anything, even more wounding: in the late 1980s and early 90s, historical scholarship confirmed the reality that in World War II France had acted more as a Nazi collaborator than as a bulwark of resistance.

Just as the balusters of postwar French identity splintered, suspicion of the Jews increased. The 1990s brought into being two seemingly diametrically opposed but in fact, according to Weitzmann, closely related developments: the increasing popularity of Jean-Marie Le Pen’s National Front and a burgeoning Islamism in the crime-ridden suburbs inhabited by North African and other Arab or Muslim migrants. That linked phenomenon continues to hold sway today—and in this way, Weitzmann argues, France has revived and perpetuated the 19th-century link between reactionary French anti-Semitism and Muslim anti-Semitism.

If, in an earlier time, the two represented a reaction to rational Enlightenment liberalism, so today’s liberal modernity, in Weitzmann’s telling, has sparked both a Christian-nationalist reaction in the form of the National Front, now under Marine Le Pen, and a Muslim reaction in the form of Islamism. Each is in turn a version of an even larger phenomenon—namely, the current “global illiberal wave.” And for each, the Jews have become a frequent target.

Hate is a messy book. Weitzmann’s narrative repeatedly dives into and out of history without signaling either where it is headed or why going there is relevant to the book’s thesis. Throughout, he has opinions about and anecdotes for nearly everything. Sometimes these are strikingly illuminating; just as often, they are frustratingly opaque.

There are other difficulties as well, including difficulties of logic. A single example: Weitzmann stipulates that one difference between the Islamist and the nationalist attitude toward Jews concerns the role played by Israel in their respective worldviews. He quotes a prominent French Arab who says that the second intifada stirred the anti-Zionist, anti-Semitic, and anti-Western passions of disaffected French Muslims even more than the events of September 11, 2001. For its part, by contrast, the French far right (like its counterparts in Hungary, Poland, and Austria) looks upon the state of Israel with growing admiration.

Endeavoring to explain this divergence, Weitzmann argues that the Jewish state solves the “normalization problem” that to him lies at the core of reactionary anti-Semitism. Israeli Jews, or Jews who move to Israel, become a people like many others with a land of its own, and thus no longer straddle the vexing line between particularism and universalism.

He makes a persuasive point, but the nationalist right’s support of Israel still represents a challenge to his symmetrical model of a unity linking it and Islamists. And that is not all. The model equates modernity with secular liberalism and its ethos of tolerance, a combined enemy opposed by Islamists and far-right nationalists alike. As far as Jews are concerned, however, the actual picture is much more complicated. Although secular liberal tolerance may be one modern answer to the “Jewish question,” nationalism, also known as Zionism, is another.

More importantly, contemporary anti-Semitism cannot be defined solely as a combined right-wing/Islamist backlash to change. A quick look across the channel to the United Kingdom finds anti-Semitism resurgent among progressives. Among followers of Jeremy Corbyn, leader of the Labor party, abolishing the Jewish state is a priority grounded in the principles of social justice and multiculturalism. Or just cross the Atlantic and take a look at what’s happening on any American campus.

In general, for every reactionary who sees Jews as instigators of tradition-destroying progress, there is a “progressive” who sees Jews as obstacles to a better future. Nor is Islamism itself definable merely as an anti-modern reaction; it as at least as much a revolutionary movement every bit as ambitious as Jacobinism.

Weitzmann’s unconvincing equation of far left and far right produces a similarly simplistic recommendation. To protect French Jews, and even France itself, Weitzmann says it is necessary to fight right-wing extremism and to strengthen the liberal center, a view widely shared across Europe and in the United States. As an analytical matter, it’s obviously true that liberalism’s collapse is bad news for diaspora Jewish communities. But this does not mean that, in an era of rising anti-Semitism, the best strategy is to place one’s bet on a renewed secular liberal politics.

As Weitzmann’s history shows, the resistance to liberal modernity mounted by intellectuals, Muslims, and populist movements has been a durable feature of French politics since the Revolution. Yet, when it comes to the Jews, liberal governments themselves, along with liberal institutions and liberal principles, have been tossed aside by France in the past, most dramatically during the Dreyfus Affair in the 1890s and during the German occupation in the 1940s.

To be sure, Jews have lived in France for a long time and, in the post-World War II liberal era, have thrived as never before. But not only have previous liberal eras come to startling ends, there is no guarantee that this one will last forever—again, as Weitzmann’s own evidence attests.

And therein lies the contradiction at the core of Hate. On the one hand, Weitzmann presses the case that the problem lies in the twin enemies of modern liberalism, the Islamists and the native reactionaries. On the other hand, he documents case after case in which France’s core secular liberal institutions—the courts, the police, the media—have failed not only to confront but even to acknowledge the irrefutable fact of rising anti-Semitism. For Jews throughout the West, the current situation and history of France should raise the suspicion that their cherished liberal order is not only weaker than many Jews have long assumed but also potentially unworthy of the confidence they place in it.

What's Behind the Resurgence in French Anti-Semitism