I just wrote a book about new fundamentalisms with the university’s much-loved Jewish president. Now one of those fundamentalisms, aided by its Jewish exponents, is coming for him. 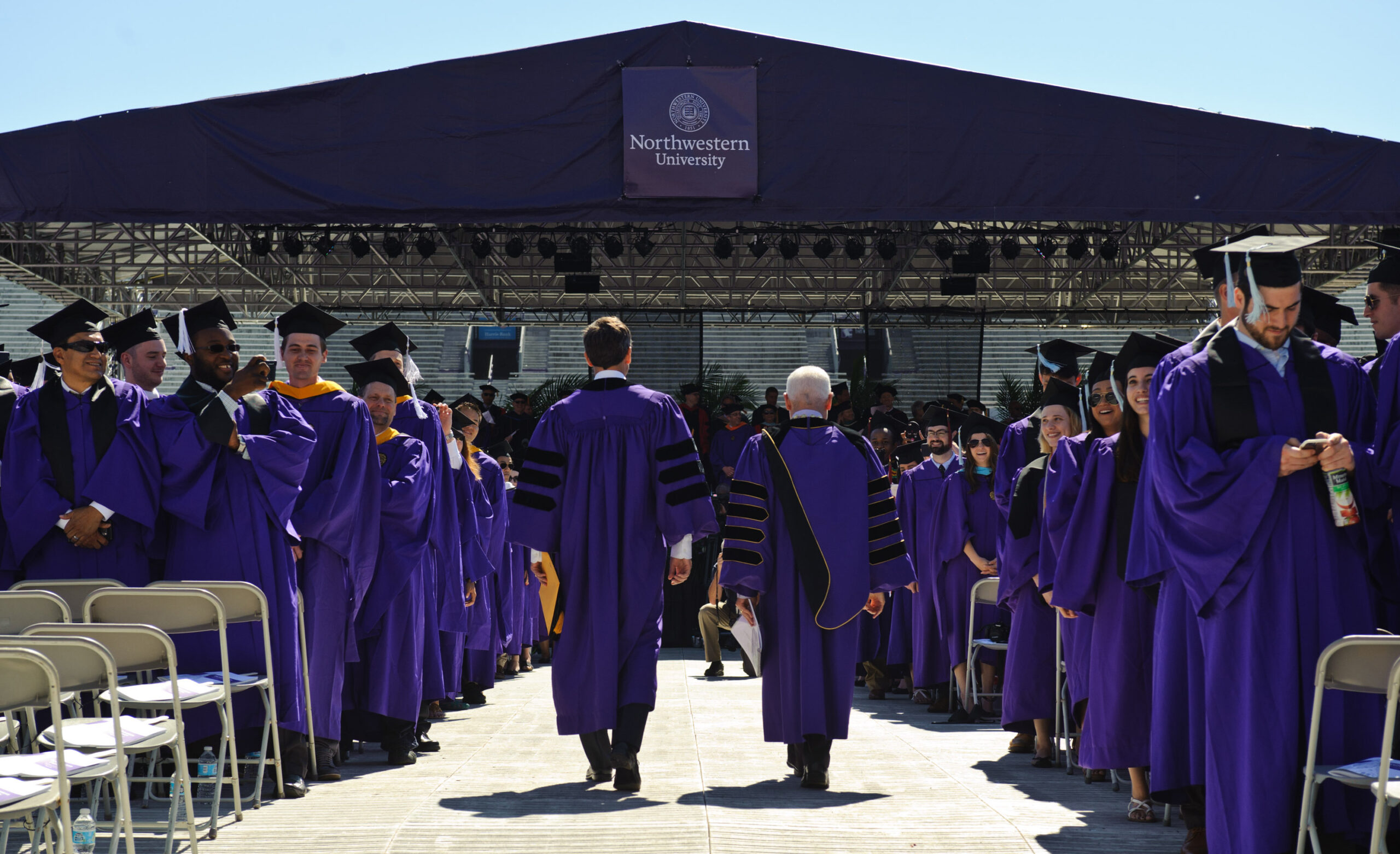 You may not have heard about the trouble brewing at Northwestern University, where I have taught Russian literature for more than 30 years. So let me tell you: we’ve been caught up in America’s whirlwind cultural reconfiguration of acceptable categories of thought, speech, and action.

In order to understand what’s happening here in Evanston, Illinois, just outside of Chicago, I have to introduce, first, my colleague and sometime collaborator, Morton Schapiro. Schapiro is the president of Northwestern University, and he strives for good relations with the surrounding community. From the beginning of his tenure as our president a decade ago, Schapiro set out to demonstrate that Northwestern is a major asset to Evanston. Outreach programs, voluntary contributions, investment in public schools, and much more were high on his agenda. It is well known in university circles that over the last ten years Schapiro has increased Black enrollment from 6 percent to 10 percent, Hispanic enrollment from 7 percent to 16 percent, and Pell-eligible (low-income) enrollment from 12 percent to 21 percent. It is less well-known that Northwestern now admits 6 percent (formerly 3 percent) of its students from the troubled Chicago public-school system. The winner of a Community Service Award from the NAACP, he has done as much as anyone to make the university he leads a civic-minded partner of the community and its residents; in 2017 Evanston awarded him the key to the city.

To ensure the safety of students, faculty, and staff, a university typically maintains its own campus police force—not only to avoid draining city resources to support a tax-exempt institution but also because police who are university employees can be trained to behave consistently with university culture. In an era when sexual harassment and assault are much on our minds, university police can offer late-night rides and rapid responses that create a safer environment for everyone, especially the most vulnerable students, staff, and faculty.

Following the shocking and violent death of George Floyd this past May, a Northwestern organization named “NU Community Not Cops (NUCNC)” demanded the abolition of the university police force. Northwestern administrators, who have themselves long made “racial justice” a priority, made clear that they sympathized with this demand. At many universities, high-minded statements are part of career advancement (or maintenance), but Schapiro is deeply committed to improving the opportunities for the most disadvantaged in a personal way, and sees this pursuit of justice as an expression of his Jewish observance. Top Northwestern officials reiterated the University’s commitment to Black and minority concerns, met with student groups over the summer, and issued, on September 10th, a document outlining specific reforms to advance “commitments to advancing racial and social justice.” These included appointing three high-ranking administrators with “expertise in diversity and equity,” establishing “anti-racism and unconscious-bias training” for 50 university leaders, providing $1.5 million to advance social justice in Evanston and Chicago, and, most important, hiring outside consultants to review the operations, practices, and budget of the university police. Before the fall 2020 quarter began, President Schapiro had already moved significant university resources into combatting racial bias.

Community Not Cops, dissatisfied that the NUPD was to be reformed and improved rather than abolished, vowed to continue protests until it was. Over the weekend of October 17-18, protests in downtown Evanston, not just on campus, included vandalism, lighting fires, and spray-painting calls for violence against police. The Daily Northwestern, our college newspaper, which is sympathetic to the protestors, quoted one student: “There is no level of property destruction that we can do that is more violent than the cops existing.” Another told the paper: “When I say that Evanston is the most racist place I’ve ever lived, I am not exaggerating.” In 2019 the city of Evanston passed a bill to pay reparations to its Black residents.

During that same weekend, in the early hours of the morning, NUCNC came to the president’s house to protest and shout obscenities, including a cry of “piggy Morty.” Schapiro, who makes no secret of being an observant Jew, and whose Jewishness is a target for some, recognized that the comparison of Jews to pigs is an anti-Semitic slur that was used by genocidal Nazis as well as by some in today’s Middle East.

Schapiro responded with a letter to the university community that is very different from the self-abasement that has become typical of the genre. After repeating his commitment to racial justice, Schapiro asserted a principle that numerous leaders on other campuses have ignored or rejected in recent years, namely, the firm support for “vigorous debate and free expression of ideas.” He drew the line at violence, intimidation, and lawbreaking. These days, any administrator who takes such a stance risks his career.

The president asked students to consider the pain of others: what would their parents or siblings feel if awakened with obscenities and personal attacks? To be sure, Schapiro allowed, students may not have known that “pigs” was a slur against Jews as well as police, but it was nevertheless hurtful and “unacceptable.” Although he was careful not to call the students anti-Semitic, replies have presumed he did. “They didn’t read all that carefully,” Schapiro later said.

Although the protestors outside the president’s home may well have been unaware of the history of calling Jews pigs, we live in an age when even unintentionally hurtful remarks can get someone disgraced or fired. To recall one recent example, this September a University of Southern California professor was denounced, and prevented from completing his class, because he mentioned a Chinese-language filler expression that sounds like an English racial slur. By contrast, campus responses to Schapiro’s letter dismissed his concerns or denounced him for even raising them.

The most extreme response to Schapiro’s letter came not from the faculty of various departments who signed protest letters, but from some 90 Jewish “students, graduate workers, faculty, and alumni.” In a Daily Northwestern guest column characterizing the protest as non-violent, they referred to a “long, sordid history of White Jewish [sic] leaders using anti-Semitism as a cudgel to denigrate Black radical protest.” While not explicitly denying the existence of Black anti-Semitism—Chicago, after all, is the home of Louis Farrakhan’s Nation of Islam—the Jewish authors of this letter rejected any mention of it as politically harmful because it would divide those otherwise united against “white supremacy.”  The point in all this seemed to be that facts are beside the point if they do not serve the immediate goal of abolishing the “racist police force.” The head of the Northwestern police force is, incidentally, Black.

The document repeatedly attributes to Schapiro and those who think like him a purpose that “erases and delegitimizes black Jews.” This division of Jews into Black and White leads to the assertions that “White Jews also benefit from White supremacy” and that “this is an inseparable part of understanding the reality of anti-Semitism in the 21st century.” By the same token, “international solidarity between Black activists and Palestinians” unites those with the right values, while Schapiro, as “a White Jew,” willfully embraces the wrong ones.

The president’s Jewish critics maintain that “a world free of police and incarceration is a world that keeps us as Jews safer from the forces of anti-Semitism.” And NUCNC does favor the abolition of all police and incarceration. In a powerful interview on WNUR news, NUCNC member Latesha Harris replied to questions about how people would be protected without police by saying that each person would learn to take care of the person next to him. It would be far “more effective,” she said, to fight crime by spending money on mental health or community food support. Asked what would happen if a shooter appeared on campus, she replied that she would not engage with hypotheticals.

The Jewish signatories of the letter are apparently satisfied with this answer, both in general and with respect to anti-Semitic violence, perhaps because they have not been raised in an environment where pogroms are common. As a specialist in Russian literature and its history, I have studied such violence in 19th- and 20th-century Russia and its medieval precedents. While pogroms have often been sponsored from above, they have also, and more often, arisen spontaneously from below. In a world without police, to whom would Jews turn if attacked?

Most important, it should be possible, at the very least, to raise such questions without being deemed a white supremacist. Democracy requires dialogue, and dialogue requires an acceptance that reasonable and decent people can disagree. Democracy is government of, by, and for the people, and well-meaning people will sometimes have differences of opinion. At the moment, civil disagreement and real dialogue, following Schapiro’s lead, are exactly what what our troubled campus needs most.

That, at any rate, is the theme of the book that Schapiro and I completed last March, Minds Wide Shut: How the New Fundamentalisms Divide Us, which explores the value of different opinions in politics, economics, literary studies, and religion, both Jewish and Christian. One lesson the Russian experience has taught me is that when a country is rent by escalating ideological conflict leading to violence, Jews are likely to suffer deeply.