Two Christian leaders join us to discuss how the Jewish idea of national covenant can help bring about race reconciliation in America. 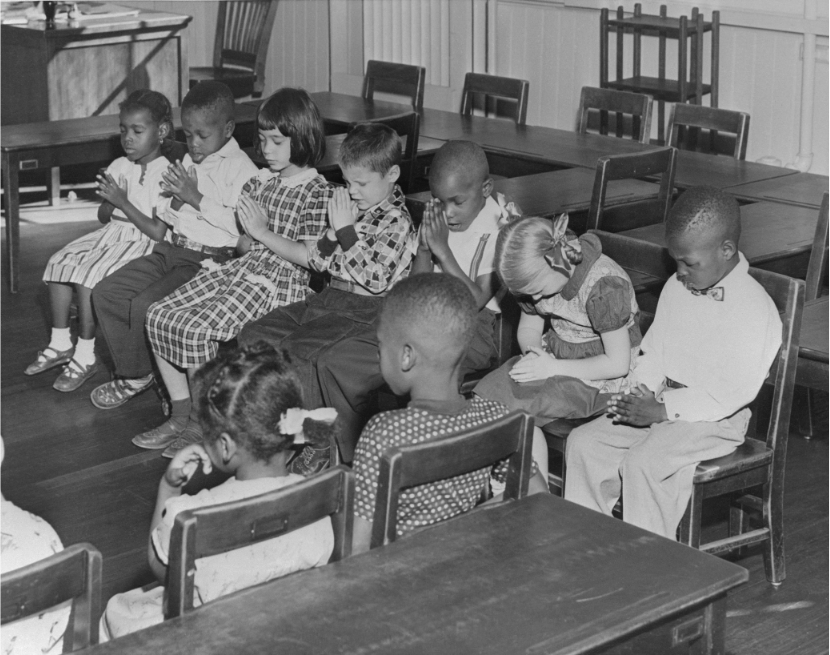 White and black pupils at Seaton Elementary School in Washington, DC join in a prayer as their school opens on a non-segregated basis for the first time on September 13, 1954. Bettmann via Getty Images.

Observation
Gerald McDermott, Derryck Green and Tikvah Podcast at Mosaic
About the authors


Gerald McDermott is retired from the Anglican Chair of Divinity at Beeson Divinity School.

Derryck Green is a political commentator, writer, and member of Project 21, a network of black thinkers.

Three times a day in prayer and each week on the Sabbath, Jews sustain and renew their special covenant with God. While no other nation has the same covenant as the Jews do, the idea of covenant―that a group of people can band together in obligation under God’s sovereignty―has inspired many other nations. From its earliest history, the people of America understood that they relied on divine Providence, and developed a civic culture that made it, as G.K. Chesterton famously put it, “a nation with the soul of a church.” Covenant, in other words, has always been at the heart of America’s national self-understanding.

It is the recovery of this Jewish idea, argue the Christian leaders Gerald McDermott and Derryck Green, that can help heal America’s racial divide. In a new book, McDermott, Green, and other contributors suggest that a return to America’s founding notion of covenant can help bring about racial reconciliation. Now, in conversation with Mosaic editor Jonathan Silver, McDermott and Green explore the idea of national covenant, how it has resonated throughout American history, and how it can help Americans once again see each other as equally made in the image of God.

The [civil rights] movement itself was really focused on forcing the nation to live up to the ideals that were articulated in the Declaration of Independence and that weren’t necessarily granted to American blacks initially, and then having to go through a period, one hundred years almost, of segregation. The movement was really to say, “we are Americans and we want equality as well.” The force and thrust of that movement happened within black churches. The central leader, the person most identified with the civil rights movement, is Martin Luther King, Jr., and he was a Baptist minister. I believe he was ordained at the age of fifteen or sixteen, so he had a long church tradition of what he understood biblical justice and righteousness to mean. That’s why every time he would go out into the public and say we want justice or we want equality he would commonly quote the Declaration of Independence. I always say that he had the Declaration and the Constitution in one hand, and the Bible in the other. It was a movement that was forged on realizing biblical justice.

The interesting thing about Martin Luther King and that movement is that he wanted to remove the importance of race as a standard or a metric that was used to judge American blacks. He wanted to reduce that and then elevate the commonality that we were all Americans. We commonly refer to him saying that he wants to see people judged by the content of their character, not the color of their skin, but I think underlying that was this commonality of being Americans, and all of us living those ideals.