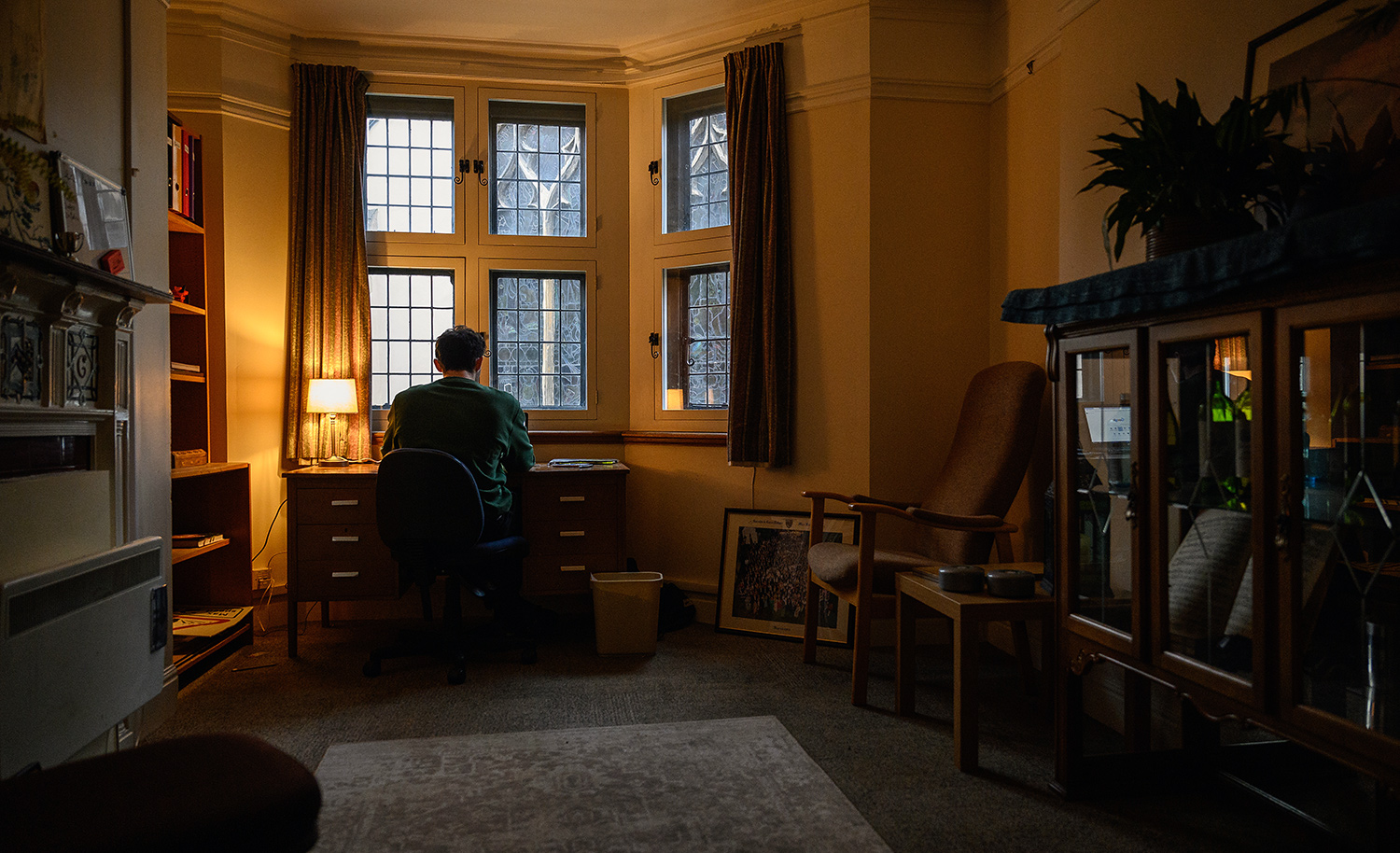 The most surprising thing about this year of teaching on Zoom is that student exams got better. I don’t mean that student exams are better now than they were earlier in the year. I mean that they are better than they were before we moved to Zoom. Also, our classes have more students now than they did before the pandemic forced us into digital exile. My seminars and lectures in Jewish thought at Bar-Ilan University are full—indeed, all of the basic Judaism classes here are full—and our department of eight full-time faculty members has over 200 graduate students. Freed from social obligations, commutes, and the need to leave our home workstations, the eight of us are publishing more and better articles and books. We can also apply for more grants and attend more online conferences. By these external measures, then, the department of Jewish philosophy at Bar-Ilan is thriving.

Yet, of course, we are not thriving. What is amiss is hard to say. I am not speaking of the virus or public health, or what’s befallen me or anyone else; but rather what is wrong in general with convening a university over a screen. In effect, all universities have become digital universities. I have not had an in-person class or conference in over a year. In fact, I don’t know how my students or colleagues are doing, not really. How can I speak for others who are thriving by external measures when I have not seen them? What can I infer about their internal states from their jittery appearance in Zoom boxes, with backgrounds carefully tailored to display impressive libraries, expensive artwork, or travel pictures from an increasingly distant era?

Perhaps, indeed, this is the problem. There is no Zoom window into the soul. In early February a court case in Texas was to be conducted over Zoom but was disrupted by a lawyer who was unable to turn off the filter that made him look like a cat. But does Zoom ever allows us to take off our other filters? We dutifully record our classes and upload them to the cloud, but in doing this our classes become performances made strictly for the record. I sometimes feel like a radio commentator playing music and telling jokes to an audience that is silent.

I lack the showmanship of America’s famous talk-radio hosts, but even Rush Limbaugh did not try to teach Maimonides and al-Farabi on the radio. Occasionally, the students show themselves unguarded. Usually these appearances are not flattering. Someone gets up, goes to his car, and drives off, all the while leaving his Zoom window open. Others have children, parents, or roommates coming in and out. Many walk around outside, listening to me as lonely peripatetics. One student was even tending sheep on a West Bank hilltop during class. I have learned to recognize the blank eyes of students reading or scrolling social media, simultaneously broadcasting themselves to the entire class. Yet, again, their tests and papers are getting better; they are clearly absorbing more information (they love this word and frequently write about the “information” in Maimonides’ Guide of the Perplexed or in the book of Genesis). They convey this information back to me with greater accuracy, and their grades are increasing.

Perhaps this method works in the exact sciences, where brains can be filled with information. But something is clearly missing in the humanities. The humanities are of course the study of the human. That is to say, in the humanities, humans study themselves and what it is to be human. Biologists do this too, insofar as they are biological organisms. Even brain scientists have brains. They use them to study brains in general, but they distinguish themselves from their objects of study. Yet, in the humanities, there is no way to make a stark separation between subject and object of study. Historians, anthropologists, and linguists understand that they approach the objects of their research in their own historical, anthropological, and even linguistic circumstances. In the 20th century, they have largely given up the search for an objective standpoint, from which they can grasp their objects of research without the influence of their own circumstances as subjects. Philosophy is the most self-reflexive of the humanities: ideally it seeks to describe human thought through human thought. That is, it strives after the Aristotelian and Plotinian goal of thought thinking thought. Its goal is not mere information and its successful completion cannot be measured in an examination. Only one’s thought itself can judge whether thought has been attained.

Zoom would not necessarily seem to be an obstacle to pure philosophical thought. After all, if Moses could think about thought itself while at the same time governing the Israelites, leading them through the desert, and battling the armies of Og and Siḥon, as Maimonides says he did in section III, chapter 51 of his Guide of the Perplexed, then he could probably manage it during a Zoom meeting. So why can’t we?

Actually, I don’t see how Moses could have governed Israel and commanded her soldiers in battle on Zoom. In fact, as I recall from Exodus, God wanted him present on Mount Sinai in person for what we now call “frontal lectures” (harṣaʾot frontaliot, unfortunately, not panim el panim, “face to face”). Indeed, one can learn about oneself by one’s self, alone. But to learn about oneself in relation to others, and to learn about humanity in general, about society, about the great diversity of human beings and how ideas come to be instantiated in the world, then one needs to be part of the world.

In the rare instances when it works, Zoom connects us mind-to-mind, which is to say, it narrows our ability to comprehend minds at work in bodies that also include passions and weaknesses and mystery. What does it mean to study history while standing outside of it? Or to study anthropology without meeting anthropoi? Can man’s political nature be examined without a live, in-person polis? Zoom has taken us out of the humanities game, so to speak, while giving us great spots in the observation stands. We are in danger of becoming fans of culture, without being ourselves cultured.

Plato once wrote a dialogue that takes place in the jailhouse in Athens after the philosopher Socrates was found guilty of impiety and condemned to death. A wealthy friend named Crito speaks with Socrates in prison and tries to persuade him to escape. Crito offers to arrange for him to live freely in Thessaly. Socrates refuses. And in the course of his explanation, he imagines the personified Laws of Athens asking him what he will do in Thessaly, “other than feast like you are vacationing for dinner.” Socrates, you see, thought life worth living only to the extent that he could speak and think, that is, philosophize with others—the very activity that landed him in an Athenian prison. In Thessaly, without the freedom and bustle of the Athenian marketplace, he worried that he’d not be able to practice philosophy.

Philosophy is an activity of the Athenian marketplace, where people are constantly coming and going. It is in such face-to-face encounters that Socrates can ask people what really drives them and seek to analyze those motivations. Without the possibility of continuing his philosophical lifestyle, Socrates refuses to leave Athens and, in a way, remains true to the Laws and accepts his own execution.

Now, the Crito did not make it into Hebrew translation until the 20th century and medieval Jews had no way of examining Socrates’ reasoning in it. Yet a similar point is made in the 12th century Muslim philosopher Averroes’ Commentary on Plato’s Republic, which was translated into Hebrew in the 14th century by Samuel ben Judah ibn Tibbon of Marseilles. It occurs with reference to Socrates’ assertion that the need for doctors is a shameful admission of lack of education among the populace. In Socrates’ ideal city, by contrast, people would be properly educated in medicine and so would not need doctors. Babies born with natural defects and those who are naturally and incurably unhealthy would simply be left to die. Averroes explains that the rationale is that once people can no longer attain the goals of life, there is no reason for them to remain alive.

Hence Socrates chose death over life when he saw that it was impossible for him to live a human life. And since every one of the people was only brought into being that he might live as a part of this city so that he undertake some action for it, with the disappearance of this usefulness from him, death is better for him than life.

City life, indeed, is so essential for attaining human ends, says Averroes, that once his city life is no longer viable, Socrates chooses to die. In Averroes’ version, the version available to medieval European Jews, Socrates’ death is a willful choice made after city-life becomes impossible for Socrates.

A year ago the coronavirus offered us a similar choice: cease city life or die. We chose to cease city life, but with what then appeared to us as a way out: technological city life, largely through Zoom. This allowed us a simulacrum of city life and allowed us to create a kind of imperfect teaching environment in imitation of the original. But it was missing the human component, the social interactions that constitute us as more than minds, as human beings in full.