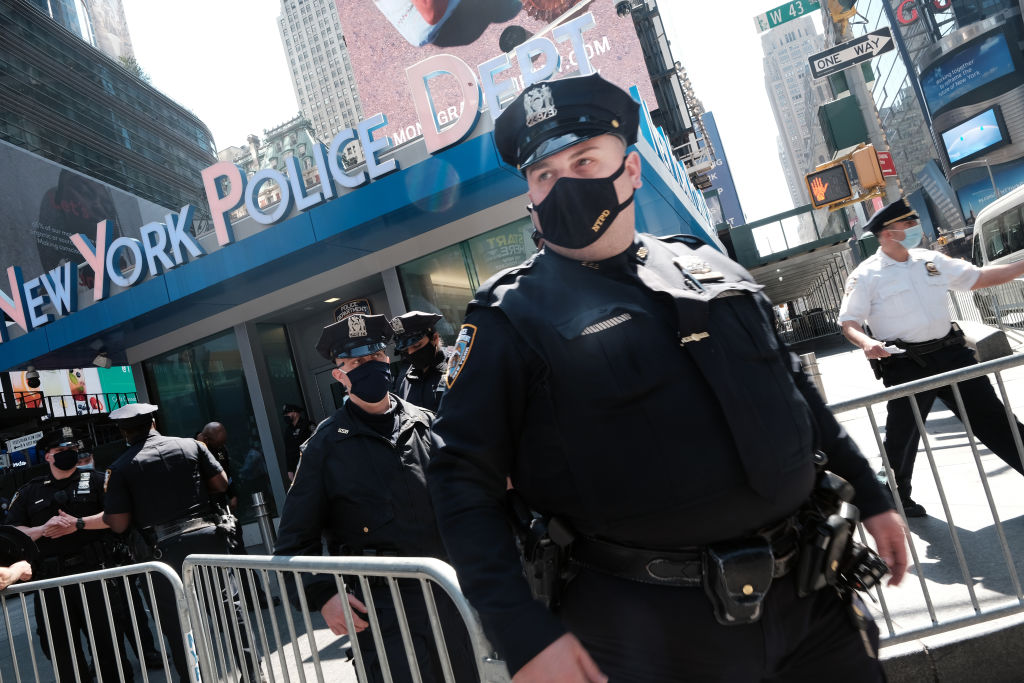 Members of the New York City Police Department listen to a security briefing on April 20, 2021 in Times Square.  Photo by Spencer Platt via Getty Images.

The United States is undergoing a spike in violent crime. Murder rates have increased drastically in big cities across the country, from Atlanta and New York to Milwaukee and Seattle. For the roughly 7 million Jews in the United States, four out of five of whom live in cities, incidents of violent crime can’t be ignored. The cities where most American Jews live are the very places that are growing more dangerous.

American Jews aren’t the only ones affected by rising urban crime, of course. Hate crime directed against Jews is very high, but as Christine Rosen wrote in the March 2021 edition of Commentary, “the vast majority of these homicides were black Americans, including many children, 55 of whom were killed in Chicago last year alone.” Here’s a case where two of America’s most urban populations, black people and Jews, are together imperiled by the return of urban disorder.

On this week’s podcast, Rosen joins Mosaic’s editor Jonathan Silver to discuss her essay, and how different ways of looking at law enforcement reveal different philosophical understandings of the human condition.

I think one of the things we’re seeing that’s a stark difference is a change in the terminology and the framework for even discussing crime. Today’s leaders in the de-carceration and defund-the-police movements see it as a problem of systemic racism and white supremacy―these are the phrases they use all the time. They see things through an ideology of what’s called critical race theory. Everything is systemic; everything is seen through this lens. So we’re not any longer talking, as we were back in the 1990s, about common-sense reforms that we might need for law enforcement and its training, whether we need to demilitarize law enforcement for example. There are a lot of questions that are very practical and very pointed that people on the left and people on the right can agree on about law enforcement and the criminal-justice system. Instead we see this systemic issue interposed on everything.

Instead of talking about prison reform, we hear discussion of the so-called “prison-industrial complex” or other such terms, and the reason I think that has changed the minds of even once more moderate Democrats like Joe Biden is that it shifts the focus. The problem isn’t crime, the problem isn’t violent criminal behavior or anti-social behavior, it’s the society that imprisons people for that behavior. Hence, it’s systemically racist. That is where I think we have a serious problem, both of fact and of narrative. Because in order for the systemic-racism, prison-industrial-complex, defund-the-police, de-carceration movement to gain adherence, everything has to be seen through that lens, and as most Americans know, every interaction with law enforcement that someone has can be quite complicated and have a lot of things going on. Every trial that’s held for a criminal infraction has a lot of complicating issues that go along with it, which really only the jury and the judge in the case can fully understand, so this systemic issue makes it very difficult to actually talk about detail or nuance or any real practical reform that we might be able to achieve in a bipartisan fashion.