The analyst joins us to talk about his essay explaining why President Biden seeks to downgrade allies and elevate adversaries in the Middle East. 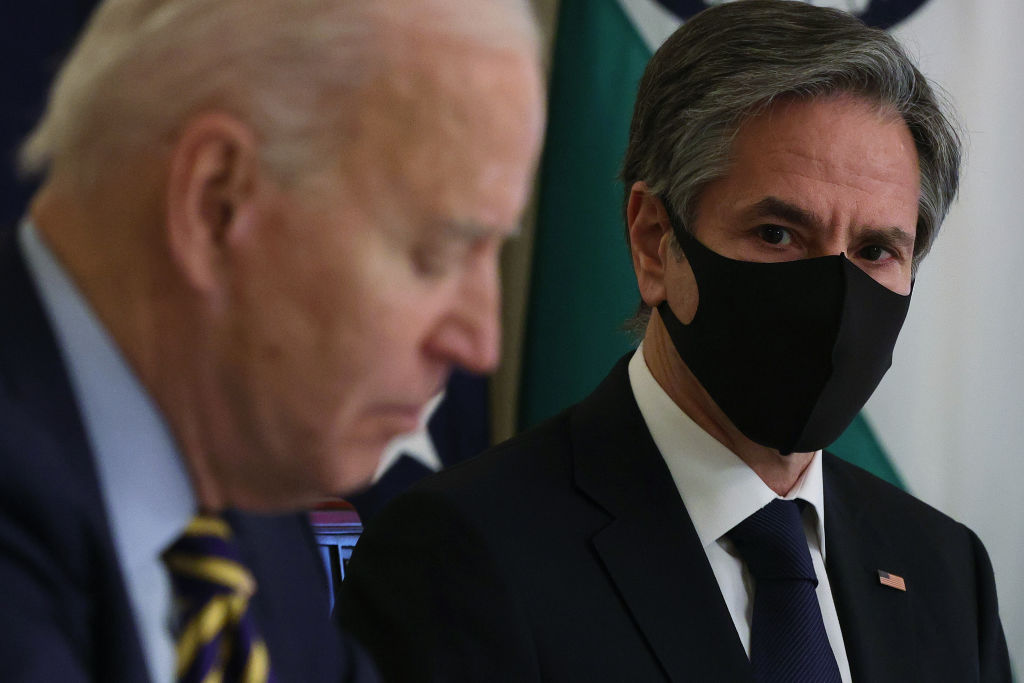 U.S. President Joe Biden and Secretary of State Antony Blinken participate in a virtual meeting with foreign leaders on March 12, 2021 at the State Dining Room of the White House in Washington, DC. Photo by Alex Wong/Getty Images via Getty Images.

In wake of President Biden’s inauguration, experienced foreign-policy hands argued over what could be learned about his administration’s approach to Israel and the Middle East from his early statements and appointments. They faced an unresolved question: would President Biden’s longtime instincts, which tend to be sympathetic to Israel, hold sway over the louder and more progressive voices arrayed against Israel in the Democratic party? Would he continue to support Israel in the Oval Office as he did for so long in the Senate? Or would President Biden advance the strategy pursued by the Obama administration, strengthening Israel’s main adversary, Iran?

This week’s podcast guest believes that the answer has now been revealed. Michael Doran is a senior fellow at the Hudson Institute, a long-time Mosaic writer, and the co-author of an important new essay about the Biden administration’s developing Middle East policy. In it, he argues that instead of working with Israel and the Sunni Arab states to contain Iran, President Biden and his team want to partner with Iran to bring a different kind of order to the Middle East. In conversation with Mosaic’s editor Jonathan Silver, Doran discusses his argument and explains why Israel and America’s Sunni allies need to prepare for the final act of America’s strategic realignment.

Our argument is very simple: the Biden administration represents the third term of Barack Obama. The Biden administration is trying to complete what Obama started. When people hear that, their first inclination is to think that he’s trying to complete the JCPOA, the Iran nuclear deal, and we’re saying no. If you listen carefully to what Barack Obama said in his interviews back when he was president, if you look at this article in Foreign Affairs by Rob Malley called “The Unwanted Wars,” and if you look at this article by Jake Sullivan in Foreign Affairs called “America’s Opportunity in the Middle East,” you see that one, they’re all saying the same thing, and two, they’re not just talking about the Iran nuclear deal. They’re talking explicitly about a new order in the Middle East and this new order is one in which the United States works in partnership with Iran, rather than as the leader of a coalition to contain Iran. A coalition to prevent Iran from getting a nuclear weapon and to contain it on the ground in the region.

What both the Biden administration and before the Obama administration have done is they recognized that if they openly say to the American people, “we’re seeking a partnership with Iran,” that’s a political showstopper, a minefield for them politically. So they developed a whole vocabulary that allows them to hide that dimension of their policy while actually pursuing it. When I say they want a partnership, in particular they want a partnership with Iran in order to stabilize Iraq, Syria, Yemen, and also Gaza. This is one of the reasons why they’re not flagging Iran in Gaza. Ideally they want to stabilize the whole region, all the areas where Iran is supporting its proxies, by recognizing Iran’s interests and working with it to stabilize the region.