Should English Change Its System of Pronouns?

In a recent column, the eminent scholar John McWhorter celebrates a linguistic revolution in the offing. But at what cost, and to whom? 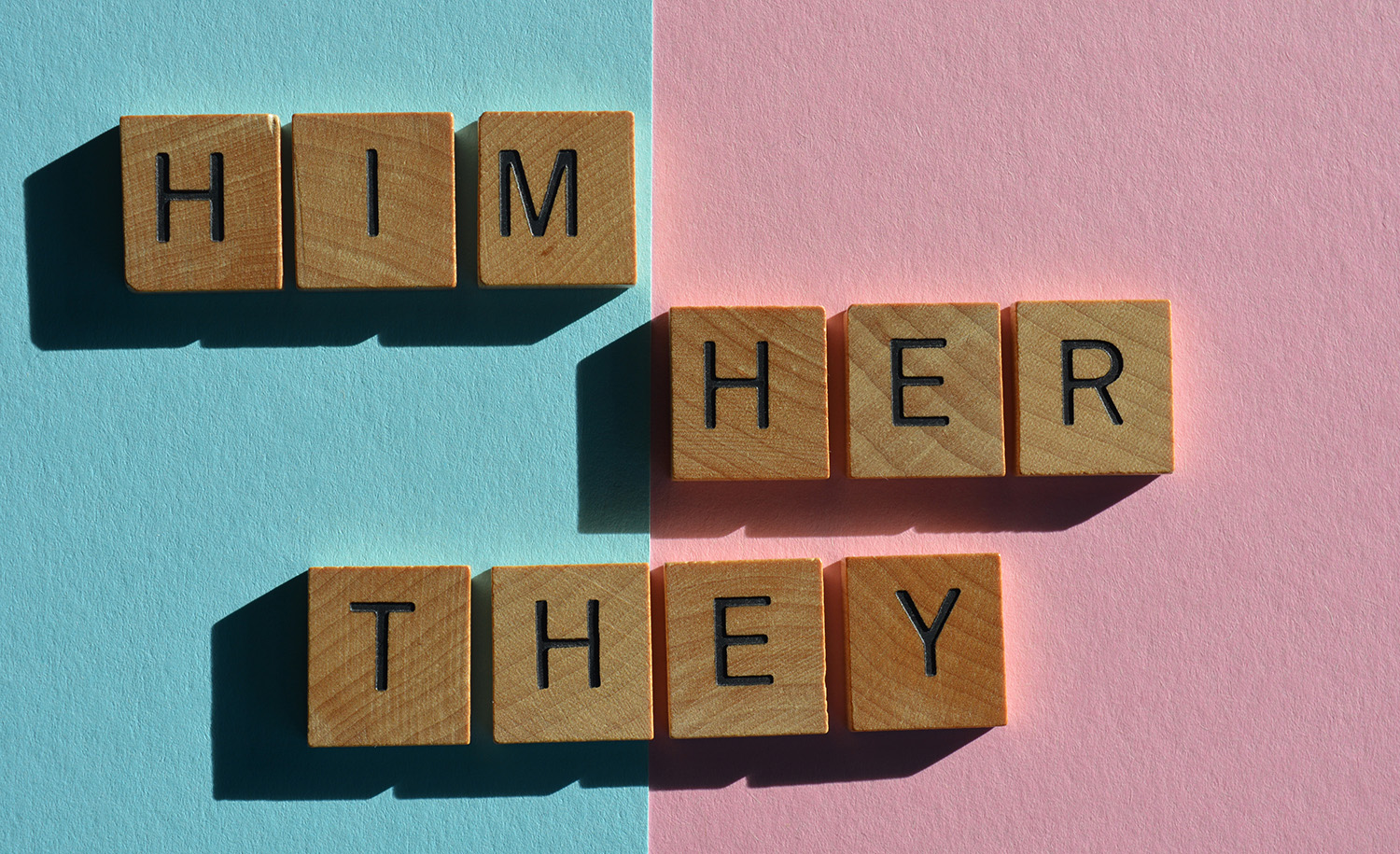 The linguist John McWhorter, a frequent contributor to the New York Times opinion pages, reports with pride in his September 25 column that he was finally able, as he puts it, after “a bit of conscious effort,” to say in regard to someone whose biological sex was not in doubt, “It’s their turn to use the kite, don’t you think?” Most of us, of course, would have said “her turn” if referring to a girl or “his turn” if referring to a boy.

True, as McWhorter himself observes, the use of they to refer to a single individual is old in English. A sentence like “That person is so far down the street that I can’t tell in which direction they are walking” sounds perfectly normal to all of us. Since we do not know if the person in question is male or female, we use the third-person-plural pronoun to include both possibilities.

But McWhorter is talking about something else, in illustration of which he gives the additional example of “Roberta wants a haircut, and they also want some highlights.” Although Roberta is an obviously female name, the speaker of such a sentence counterintuitively (and laudably, in McWhorter’s opinion) says “they” rather than “she,” whether because he knows that Roberta does not identify as female, or does not know but fears offending her if she doesn’t. In our era of LGBTQ politics, this is considered the progressive thing to do.

As McWhorter also points out in his column, there are many precedents for ideological considerations, or for the preferences of certain minority groups, being allowed to dictate common language usage. If we say today “African Americans” rather than “Negroes” or “blacks,” this is because we believe that this is the way members of this group wish to be publicly referred to. It seems to us a matter of elementary consideration, as well of non-racist or unprejudicial thinking, to accede to their wish.

Still, there is a fundamental distinction between Roberta’s case and theirs. Whether I call an individual an “African American” or something else says nothing about my own sense of who I am or my overall grasp of reality. Jews have also requested in the past to be called “Hebrews,” “Israelites,” or by other names without intending thereby to make anyone change his or her view of the world.

The matter of Roberta is different. If you see someone who strikes you in every respect as being a woman but feel compelled not to refer to her as one, this affects your entire sense of social relationships and human identities, including your own. You are making a statement about the very nature of human existence, namely, that the way human beings have traditionally thought about gender throughout history no longer applies, and that when you think you are seeing a person of a certain sex, you are the victim of old-fashioned categories of perception. A world observed through the prism of non-gendered pronouns and identities is a radically different one from the world we have been used to inhabiting.

This is no doubt what the proponents of such a change want. McWhorter appears to believe this change is on the right side of history, and as a linguist he is excited to have an opportunity to see a momentous shift in usage in the making. While elsewhere he has shown an admirable willingness to reject politically correct pieties, here he has chosen to remain in step with them.

And yet whether it is best to alter the English system of pronouns is clearly a question of values, not of linguistic inevitability. By the most generous estimates, LGBTQ people are a small minority of the population of America and other similar countries. As “progressives,” those pushing for such a change would no doubt consider themselves proponents of democracy too, but what exactly is democratic about demanding that a large majority change its entire way of thinking and speaking in order to suit a small minority’s preferences?

McWhorter’s examples of analogous changes in English in the past do not serve his argument well. One such case that he points to is the loss of the familiar second-person-singular pronoun thou and its replacement by the more polite plural pronoun you in the 17th century. Presumably, he would say that this change, too, was on the right side of history because it weakened the linguistic distinction between superiors and inferiors, masters and servants, and democratized the linguistic playing field. However, the fact that it did not occur in other European countries when they eventually democratized, too, shows that this is at best a partial explanation. The French Revolution was far more radical than any that took place in England, yet never did even its most extreme proponents call for replacing the familiar tu with the polite vous.

Furthermore, McWhorter ignores the fact that English’s elimination of thou was a great loss to the language’s capacity for emotional resonance. The use of thou was an indicator not only of social hierarchies but also of friendship, tenderness, and intimacy between social equals. This is something that English second-person pronouns can no longer express. Indeed, many English speakers lamented this change as it was happening, such as 17th-century Quakers, who objected to it strenuously, and continued to address each other as “thou” long after the word had disappeared from most of English speech. Were they on the wrong side of history or merely on the losing side?

McWhorter is also correct in pointing out that many languages, such as Chinese and Turkish, do not have gendered pronouns at all. But this is irrelevant to the speakers of a language that has them and who are accustomed to them. McWhorter’s claim that late medieval English was on its way to becoming genderless, too, and that the word she was “yanked . . . from a word meaning ‘that’” to prevent this from happening, is, for a knowledgeable linguist, surprisingly inaccurate. She wasn’t “yanked” from anywhere. It or variants of it were widely used throughout the English Midlands in Middle English, and when the “he-she” distinction threatened to disappear from southern and London speech because of the phonetic convergence of he (“he”) and heo (“she”), the Midlands form gradually replaced heo. If anything, this demonstrates that English speakers of the period had an innate desire not to let their pronoun system lose its gendered nature.

Or to take another of McWhorter’s examples of linguistic change under directed pressure. When the word ain’t was hounded and banished from the English language by high-minded grammarians and schoolteachers in the late 19th and early 20th centuries, it was in the name of an anti-populist purism that in fact negated what would today be called “progressive” values. Ain’t was a valuable word especially used by the American working class, a perfectly legitimate contraction of “am not” that has found no adequate replacement to this day. (Since we’re no longer allowed to say “ain’t I” and feel uncomfortable saying “amn’t I,” we have been reduced to the totally illogical “aren’t I.”) There is much to be said for the refusal of ain’t users to give up the word, even if in the end they were forced to.

Linguistic changes are not necessarily desirable just because they take place. Whether they are merely technical, such as the shift in the pronunciation of a phoneme, or deeply substantive, as in the case of a word like thou, they occur as a result of dynamic developments in which many speakers participate and should not be thought of as predetermined by history or anything else. They can be for the better, for the worse, or neutrally neither, and which of these we think they are depends on our overall outlook.

All this is particularly apposite in light of last week’s Torah reading of Breishit, the first portion of the new year’s cycle. The King James Bible’s translation of the Hebrew original tells us: “So God created man in his own image, in the image of God created he him; male and female created he them.” The idea of a bipolar distinction between the sexes has been fundamental to Jewish thought and practice from the start, as it is also to the highly gendered Hebrew language. Indeed, in the Kabbalah, whose influence on Judaism has been enormous, the entire universe, God included, is either masculine or feminine in its various aspects, whose dynamic interplay is crucial for the world’s stability. The Holy One Blessed Be He, for instance, is masculine; the Sh’khinah, or divine presence, is a “she” and feminine. If gendered pronouns are on the wrong side of history, so is Jewish tradition.

As does of much progressive thought today, McWhorter celebrates some differences at the expense of eradicating much more fundamental and important ones. We English speakers should not let ourselves be bullied by linguists like him or by the LGBTQ activists he sides with. He may be right (although frankly, I doubt it) that one day he and she will go the way of thou and ain’t, but this is no reason to abet the process by joining it. Let’s stand by gendered pronouns and go on using them as we always have done. In doing so, most of us will also be standing up for ourselves against those who are determined to change, not only English pronouns, but who we are.

Should English Change Its System of Pronouns?