The End of the Orthodox Voting Bloc?

The New Jersey gubernatorial race suggests that increasing numbers of haredi Jews are now voting based on personal conviction rather than communal pragmatism. 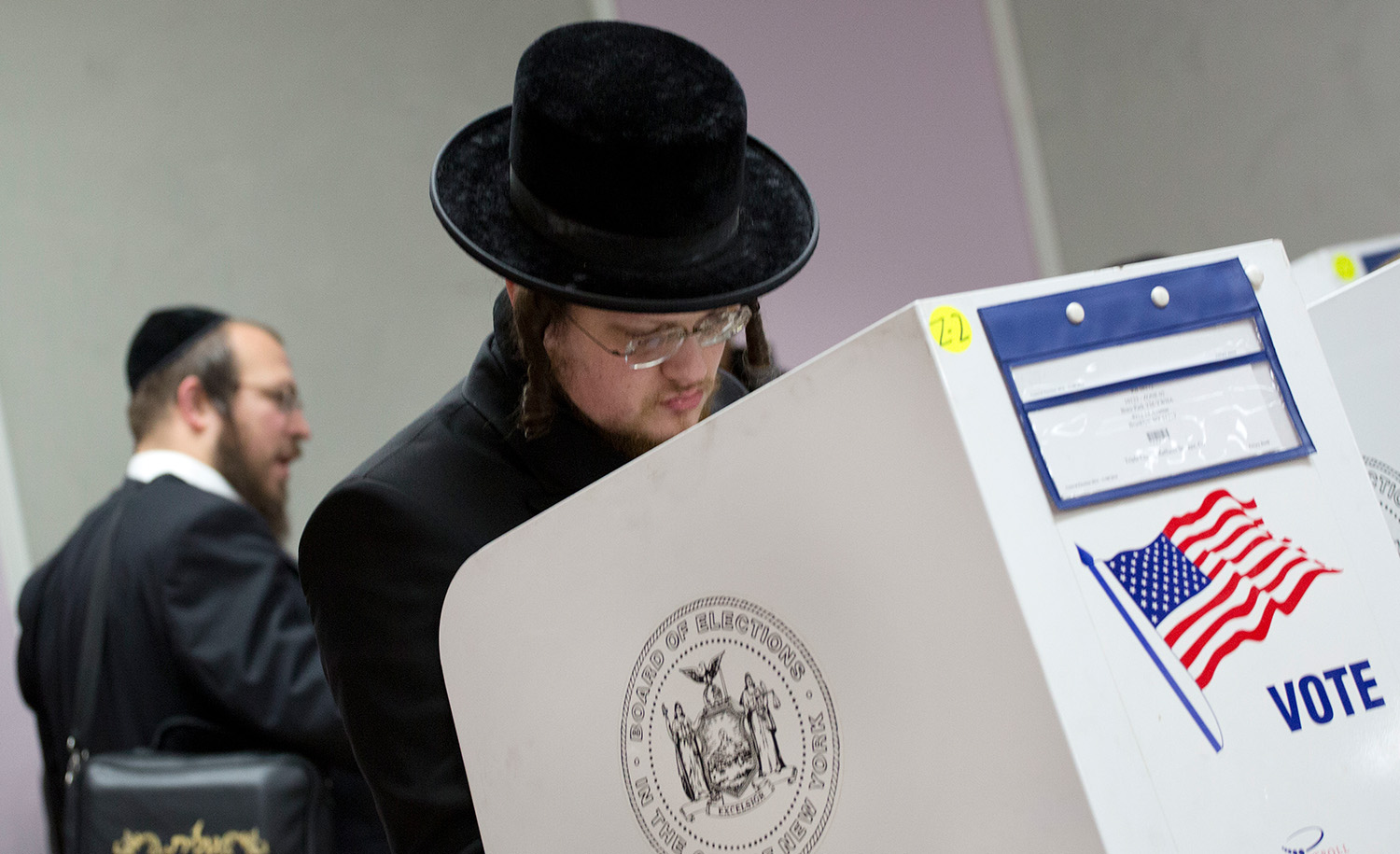 Among the elections garnering national media attention last week was the New Jersey gubernatorial race, which pitted the incumbent Democrat Phil Murphy against the Republican challenger Jack Ciattarelli. The morning after the election, when votes were still being counted and it appeared that Murphy was set to win by the narrowest of margins, Dave Wasserman, a respected beltway analyst, tweeted:

Had the Lakewood Vaad endorsed Ciattarelli (R) instead of Murphy (D), we could be looking at a very different #NJGOV race right now.

For the uninitiated, Lakewood is a large ḥaredi (ultra-Orthodox) enclave in central New Jersey, and the Vaad (Hebrew for “council”) is a committee of prominent rabbis, businessmen, and lobbyists who serve as the community’s leadership and often endorse political candidates. And Wasserman’s tweet was not the outburst of a deranged anti-Semite, imagining a sinister cabal of rabbis and financiers pulling the strings of a statewide election, but a serious reflection on the influence of the Vaad on the voting patterns of Lakewood’s Jews. The Vaad endorsed Murphy, but, as Wasserman understood at the time, voters in Lakewood preferred Ciatterelli by a significant margin. In other words, Wasserman was implying, in all likelihood correctly, that even more Lakewood residents would have voted for Ciaterelli had the Vaad backed him, perhaps shifting the overall results.

Now that most of the votes have been counted, it appears that Murphy won a larger margin than expected, and it is thus unlikely Lakewood voters could have swayed the election. But what is interesting for our purposes is that the majority of them voted for the candidate the Vaad did not endorse. What does this imply about changes in ḥaredi voting, and ḥaredi civic engagement writ large?

First, some historical background. Jewish communities have long sought to pursue their collective interests through shtadlanut (intercessorship), where a communal representative would go to the ruler hat in hand to represent the interests of the local Jews. Even on these shores, Jewish leaders of all stripes followed suit, preferring to appeal to the government behind the scenes. Among more traditional Jewish communities, representatives could often promise politicians bloc votes from their followers in exchange for support for their institutional needs and programs, and would broker deals with candidates accordingly. Groups associated with Brooklyn ḥasidic courts would issue instructions as to whom to vote for, as would the Lakewood Vaad. Agreements with politicians rarely involved the sort of issues that excite the passions of religious traditional Christian voters—such as gay marriage or abortion—but would instead focus on more local needs, such as zoning restrictions and government funding for schools.

For many years this trend prevailed, although it had its discontents. Rabbi Avigdor Miller, a prominent ḥaredi rabbi and educator who passed away some twenty years ago, is the best-known proponent of a different approach, stressing shared values over the pursuit of concrete communal interests. As Miller stated in 1984:

To a large extent, this debate is one of idealism versus pragmatism. And it is a question of how to focus one’s participation in the democratic process: does one engage in the political questions facing the country as a whole or prioritize instead the political interests of one’s own group, organizing the community in order to wield maximal political power.

Until recently, America Ḥaredim opted for the latter, voting in blocs to a large extent. In the 2000 New York Senate race, for instance, Hillary Clinton won 1,400 votes in the all-ḥasidic village of New Square, while her opponent, Rick Lazio, received only twelve. And in Lakewood itself, voters followed the Vaad in overwhelmingly voting for the Republican gubernatorial candidate Chris Christie in 2013, and then in voting for Murphy, a Democrat, in 2017. But there were signs that change was afoot. In the 2009 race for the governorship, the Vaad endorsed the incumbent Democrat Jon Corzine, who had supported funding for the Beth Medresh Govoha, the large yeshiva in Lakewood, as well as other projects for the community. There was, however, a groundswell of popular support among Lakewood ḥaredi voters for Christie, largely on the basis of his opposition to gay marriage (at the time a state issue) and his conservative stance on other social questions. In the end, despite the Vaad’s endorsement of Corzine, Christie won the Lakewood vote, leading some to question whether the Vaad still had the influence it claimed.

Last week’s election suggests that whatever trends were in play in 2009 have intensified. Murphy—who has championed various Lakewood educational proposals and (unlike many New York politicians) wasn’t antagonistic over the reopening of schools and synagogues during the coronavirus pandemic—was endorsed by the Vaad, as well as other leading rabbis and representatives of the leadership’s party line. Murphy’s supporters argued that he deserved Jewish votes on ethical grounds as a show of appreciation for his support for the ḥaredi community, and that, on pragmatic grounds, a proven friend is preferable to an unknown entity. At the same time, Ciattarelli was brought to Lakewood by grass-roots groups during the campaign, spending over a full day in the township and appealing to many with his conservative social views and dedication to family values. His visit included a stop at the yeshiva without the approval of its administration, leading its three head rabbis to condemn the visit as “an instrumentalization of Torah” and a “desecration of God’s name.”

What did this gap between the leaders’ support for Murphy and the grass-roots support for Ciattarelli yield? While the ḥaredi community extends beyond the town limits of Lakewood, looking at results from the city proper gives the best snapshot of the results. Ciattarelli won an overwhelming 62 percent of the town’s vote to Murphy’s 38 percent, drowning out the Vaad’s endorsement. But it would be wrong to conclude that the Vaad has lost its clout entirely, as Lakewood voted for Donald Trump over Joe Biden to the tune of 83 to 17 percent. Is the Vaad responsible for the 20 percent or so of voters who turned out for Murphy despite having voted for Trump—amounting to approximately 4,000 votes in a close election? It’s impossible to know with certainty, although both ḥaredi and nonpartisan sources suggest that may be the case.

What is clear is that the endorsement of the Lakewood Vaad is far less determinative of the Lakewood vote than it had been in years past, and at best commands a fraction of the local ḥaredi electorate.

This trend has shown itself not only in Lakewood but in other ḥaredi enclaves as well. The recent New York City mayoral election offers another such case. Many ḥaredi groups endorsed Eric Adams, first in the Democratic primary and then in the general election against Curtis Sliwa. Their support for this moderate Democrat was due to their prior relationship with Adams developed when he was the Brooklyn borough president, and also to Sliwa’s criticism of yeshivas for offering inadequate education. Despite these endorsements, in the heavily Orthodox 48th District Sliwa received 55 percent of the vote to Adams’s 39, suggesting that members this community followed party affiliation over the endorsements of religious leaders.

Further indications of this appear in the 48th District’s race for city councilman, between the Democrat Steve Saperstein and the Republican Inna Vernikov. The two candidates shared near-identical policy platforms and a history of identifying as both Democrat and Republican. Orthodox communal leaders overwhelmingly endorsed Saperstein, with the expectation that a Democrat could have a larger impact than a Republican on the Democrat-dominated city government. Yet Vernikov won the election in a landslide with nearly two thirds of the vote, as voters appeared to prioritize their ideological identification with the Republican party over their leaders’ more pragmatic considerations.

How might we understand this new trend, wherein the rabbinic and establishment endorsements of candidates in the old style have given way to an electorate that increasingly supports Republican candidates and/or those who support their conservative values?

There are several implications of this shift.

First of all, it points to a decline in the ḥaredi bloc vote in many communities. Although religious leaders can still convince some fraction of the population to follow their endorsements, most Ḥaredim have thrown in their allegiance with the Republican party, reflecting both identification with the party’s values and an embrace of Trumpism. Even if the Vaad did swing a fraction of the Lakewood vote to Murphy, a majority of the population rejected the endorsement, indicating the decreasing degree of political power of centralized ḥaredi leadership.

In a sense, this points to a waning of rabbinic authority, and specifically of the idea of Daas Torah—that prominent rabbis’ opinions about all subjects should be treated with near-absolute deference. While in some communities, especially the more close-knit ḥasidic groups, the rabbi still commands obedience in all areas of life, most function today in a more decentralized fashion. What this means is that in many ḥaredi communities the power structure is bottom-up rather than top-down. And the shift to voting for Republican candidates even against the endorsement of the religious leadership flows from this transformation.

This move away from a centralized shtadlanut to decentralized decision-making might be most significant in what it reflects about increased ḥaredi engagement in American civic life. More and more, Ḥaredim are voting not on the basis of specific communal interests but instead bringing their religious principles to bear on questions that affect the country as a whole. In a sense, then, Ḥaredim appear to be taking a more entrenched place in American civic life, participating in party politics as Americans.

This process is evident in ḥaredi media, with popular publications like Hamodia, Ami, and Mishpacha (the latter two founded within the last two decades) paying far greater attention to American politics than previously, and also in the increased ḥaredi consumption of conservative non-Jewish media. It’s also reflected in the greater roles well-connected ḥaredi individuals play in the political sphere as fixers and fundraisers.

This move toward greater ḥaredi engagement with media and politics has culminated in the emergence of Ḥaredim as engaged participants in the democratic process who can no longer be told whom to vote for, who vote as individuals rather than as a bloc and largely on the basis of ideology rather than pragmatism. Even if the ḥaredi vote did not swing the New Jersey gubernatorial election, these trends are crucial to understanding this growing community and its integration into the nation’s civic life. Whatever one thinks of the political choices Ḥaredim are making, the benefits of growing ḥaredi self-identification as Americans and the concomitant embrace of the political duties of citizenship are manifest. And at the same time, one must wonder what will be lost as they replace their intensely communal ethos with American individualism.

The End of the Orthodox Voting Bloc?