Podcast: Michael Doran on the Most Strategically Valuable Country You've Never Heard Of

Situated between Russia and Iran, Azerbaijan could be a key partner in the struggle for Eurasia. And a stronger alliance between Washington and Baku could benefit Jerusalem, too. 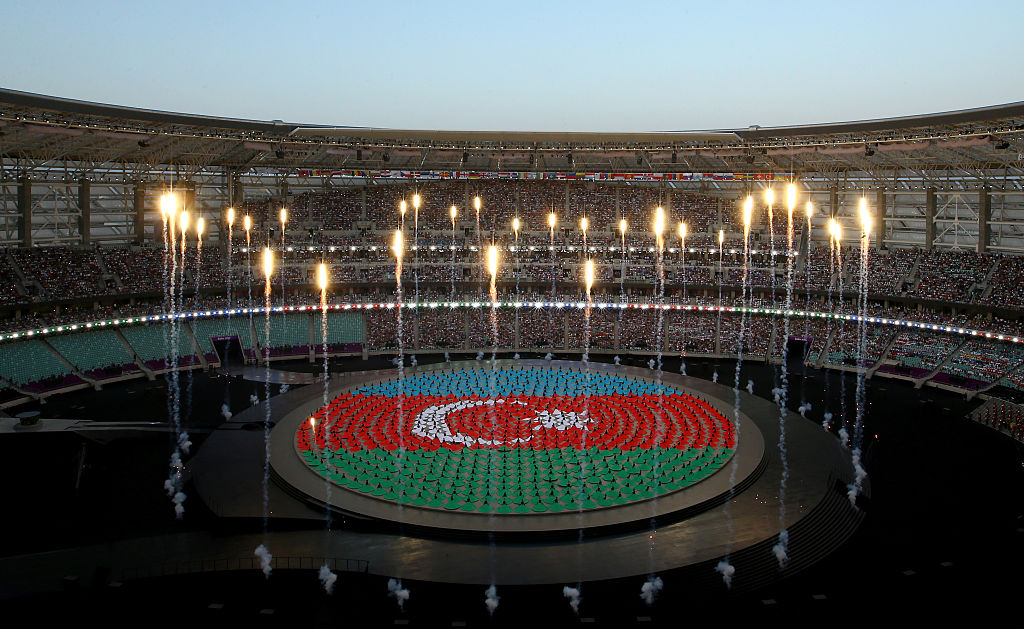 Performers depict the national flag of Azerbaijan during the opening ceremony for the 2015 European Games on June 12, 2015 in Baku, Azerbaijan. Photo by Richard Heathcote/Getty Images for BEGOC.

The Republic of Azerbaijan scrambles the assumptions of even the most veteran foreign-policy hands. Sitting at the nexus of Europe and Asia, Azerbaijan is the only nation that borders both Iran and Russia; it is at the center of global energy; and, despite being a Muslim-majority nation, it has had a formal relationship with Israel for almost 30 years. By looking at Azerbaijan, this week’s podcast guest suggests that one can reimagine America’s approach to Europe, Asia, and the Middle East.

Michael Doran, a foreign-policy analyst and long-time Mosaic writer, argues in a recent essay that Azerbaijan is uniquely positioned to work with America in pursuit of geopolitical goals that serve both nations. In conversation with Mosaic‘s editor Jonathan Silver, Doran explains what makes Azerbaijan such a unique country, how it relates to Russia, Israel, Iran, and Turkey, and how it can help the United States recover the geostrategic discipline it needs to strengthen its friends and to counter its adversaries.

Somewhere between a quarter and a third of all Iranians are Azerbaijani. This is not well known. It’s not just that they’re Azerbaijani in their ethnicity; the vast majority of them live in the northwest quadrant of Iran, just immediately south of the country of Azerbaijan. The more I examine this question, the more I’ve convinced myself that if you’re sitting in Tehran, your number one fear is Azerbaijani separatism. That is the scariest thing. If those Azerbaijani provinces of northwest Iran were to seek autonomy, they could bring down the regime for sure, they could crack up Iran, and they could turn Iran into a relatively insignificant country.

The country of Azerbaijan is only 10 million people, and historically it’s been weak, but it’s growing stronger thanks to its oil and gas wealth and the intelligence of its leadership. They’re not fomenting Azerbaijani separatism in Iran, not by any stretch of the imagination; they don’t want to have a conflict with Iran. But the mere fact of the rise of modern Azerbaijan is having an effect on the Azerbaijani population in Iran. Some significant segments of the young Azerbaijanis in Iran want to cultivate their Azerbaijani and Turkish roots. Historically the Azerbaijani community in Iran has been much more integrated into the Iranian elite than say the Baluch or the Kurds. Iran is a multi-ethnic country—the Azerbaijanis are the largest ethnicity and they’re also the ones who have historically been the best integrated, so it’s not clear that we’re going to see in the next twenty years a really well developed movement in Iran for [Azerbaijani] autonomy from Iran. That’s not clear at all. I don’t want to say that I know that. What I can say for sure is that the attitudes on the ground are changing very quickly, and there’s this new thing for the Iranians that they haven’t seen, which is a kind of grassroots movement for greater cultural autonomy, and that could have very significant political implications.

Podcast: Michael Doran on the Most Strategically Valuable Country You've Never Heard Of