That America still so passionately debates abortion marks the difference between the stagnation of Europe and the hopeful civilization of the United States. 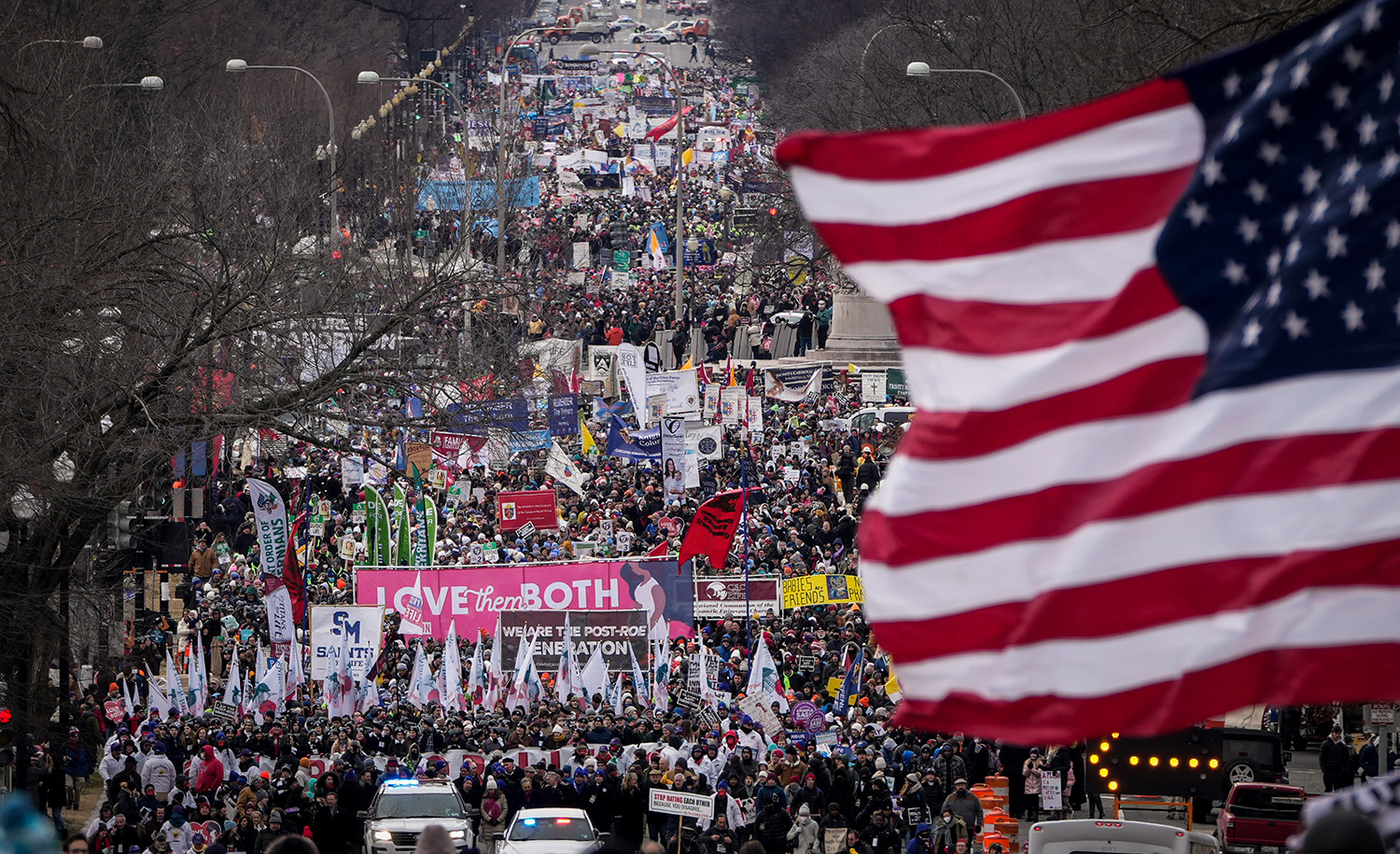 Over a dozen years ago, at a Harvard faculty reception for visiting lecturers, I found myself in conversation with a fellow academic (name mumbled) “from Hungary.” To my polite inquiry about how he was enjoying his stay, he replied with surprising enthusiasm, “I love coming to America! I love your moral intensity.” Pressed for details, he said that in Hungary, abortion, for example, was a settled matter: “Women who want abortions get them. In America, by contrast, you treat it seriously, as a moral issue.” That we still so passionately debated abortion marked the difference for him between the decadence of Europe and the hopeful civilization of the United States.

In all that now troubles so much of this country, our European visitor would see his insight confirmed. From the time that the impending Supreme Court decision on Dobbs v. Jackson was leaked, headlines warned that the “Blue-Red Divide” was about to get starker. After the decision was released, contrasting front-page photographs of mourners and celebrants reinforced the impression of a nation about to break apart. But from our visitor’s perspective, nothing would represent us better than the intensity of our argument over the right to abort a fetus. Human control over life and death will always be subject to controversy, and advanced civilizations are those that learn to live with the debate.

By contrast, no statist country, of either the left or the right, would tolerate such disorder. Socialism legislates for the people and decides matters on their behalf; what it deems “progressive” dare not be challenged, let alone reversed. For their part, statist authoritarians in countries with a history of political chaos claim the need to impose order through national decree. Constitutional democracy, however, is never uniform in its thinking, and would ideally rotate between liberals who want to make things better and conservatives who want to prevent things from getting worse. We don’t need polling to tell us that most Americans are not dogmatic on whether and when abortion is morally sound: our political debate over where to draw the lines, geographically and otherwise, may indeed be the strongest proof that, even now, Americans are willing to rise up to the civic obligations of democratic self-government.

In truth, since I approach this issue as a Jew, bound by the Torah’s much older constitution, I feel a little like the man on the train who ignores the conductor’s order to remove his suitcase from the aisle. The man continues to sit impassively even after the conductor’s second warning—even after the conductor heaves the bag from the train. When a fellow passenger asks why he didn’t just do as he was told, he shrugs, “It’s not my suitcase.” Just so, the laws of Moses have been so well interpreted through so many the generations by a people forged through argument that I happily accept the rabbis’ tempered views on the subject.

Rabbi Saul Berman once suggested that American Jews could do a much better job of sharing with their fellow Americans the Jewish teachings on matters like abortion, according to which the fetus becomes a living person at the moment of birth, while simultaneously insisting that no human being is fully entitled to injure or destroy any part of her own body at will. In Berman’s words,

Jewish law affirms the need for careful case-by-case evaluation of the rights of the potential person as against the needs of the living mother. While Jewish law does describe certain patterns of situations in which abortion is not permissible—such as for purely socio-economic reasons, and likewise describes certain situations in which abortion is certainly permissible, such as where there is threat to the life of the mother—nevertheless, most situations require case-by-case determination based on the peculiarities of the needs involved.

In the same spirit, a friend in Tel Aviv tells me that Israelis find the American brouhaha bizarre. In Israel, which is nowadays often used as a point of comparison in medical matters, a hospital committee interviews candidates for abortion and generally interprets leniently in matters governing the mother’s health and welfare. It is assumed that everyone involved in this decision is struggling alike with its moral aspects in a society that is unlikely to undervalue the potential life of a child.

The matter there seems straightforward precisely because its complexity is so fully acknowledged and confronted. Abortion in Judaism is never merely an expression of unbounded personal autonomy, summarized in the protester’s call, “my body, my choice.” Jews are commanded to be fruitful and multiply. Individual life is valued so highly that paradoxically, the Jewish state can be held hostage by its enemies for the return of the lifeless body of one of its fallen soldiers. The childless woman is the most tragic figure in the Hebrew Bible and in much of the Jewish writing and thinking that followed from it. Thus, the woman who casually aborts a child in a society where every member is responsible for every other may feel she offends not just the unborn child but the woman who is unable to bear a child. Such decisions are not taken lightly.

National fate also plays a big part in Jewish judgment. In other nations, the enthusiasm for taking Jewish life has spawned religious crusades and jihads, ideological pogroms, and genocidal fervor. Some consider the very existence of the Jews a crime against Gentiles. Far from inhibiting further wars against the Jews, the European “victory” over the Jews in the Shoah has inspired some Muslims and Arabs to try their hands at it. Though the extinguished third of the people murdered in the Shoah can never be replaced, no sentient Jew taking a Jewish life in embryo can fail to consider what it signifies.

In the Jewish state as in the Jewish tradition, abortion is not forbidden outright, and neither is it a cause for celebration. Yet despite carefully calibrated Jewish teachings and compelling national considerations, many American Jews have instead embraced abortion itself as a political cause, a synecdoche for the equal dignity of birthing-persons, that is, women, removing any gestational limitations so that, in practice they have tipped the scale to the side of abortion on demand as a moral as well as legal “right.” Here, where morality intersects with American law, the nonchalant Jewess on the train must assume responsibility for the suitcase after all. The term “right,” originally intended to decriminalize abortion by allowing women who needed the procedure to terminate pregnancy without fear of punishment, has been redefined by the women’s movement, then by the Democratic party, as an unqualified civic good, like the right to vote. But the termination of pregnancy is not such a self-evident civic good. Rather than embracing abortion as a cause, liberal Jews would have benefitted this country greatly had they brought their more morally serious and qualified teachings to bear on the debate.

It is admittedly difficult to champion any cohesive Jewish view of abortion. I once noticed on the lawn beside Harvard’s Science Center a “cemetery” of hundreds of miniature American flags, representing aborted American children. This was a Catholic initiative inspired by Catholic teachings that prohibit contraception, making all the more sinful the removal of an already formed embryo. The students I met who had mounted this protest were intelligent, modest, and a welcome relief from the usual shouting grievance brigades. They were wholly secure as well as sincere in their fight “for life.” But since Jews do not share the Catholic absolutism on abortion, we can only invite others to appreciate the difficulties of our balanced approach, urging that the sanctity of life not be surrendered to the sanctity of self.

A balanced legislative approach to this most serious moral question may yet emerge from purple parts of the country, spreading outward to its zones of homogeneity, red and blue alike. For now, such balance as we have achieved exists not organically, among the citizens who comprise the polity but rather in a tense contest between opposing ideological camps. Hopefully, with the decision over abortion returned to the states, the legislatures of states like Mississippi and Arkansas will create medical paths for critical intervention on an individual basis, crediting the worth of the mother as much as that of the unborn child. Hopefully, and much more urgently, let ideological rigidity never capture the Republic whose founders, writing in the name of the “good people of these colonies,” ended their declaration of freedom and independence with a soulful appeal “to the Supreme Judge of the world for the rectitude of our intentions.”

In that light, and for now, what some perceive as a disaster is the return to a humbler and messier approach to abortion that really does bear out our Hungarian visitor’s impression of a country with a morally inspired mind and soul.