Why Jews Used to Eat Dried Carob on Tu b'Shvat 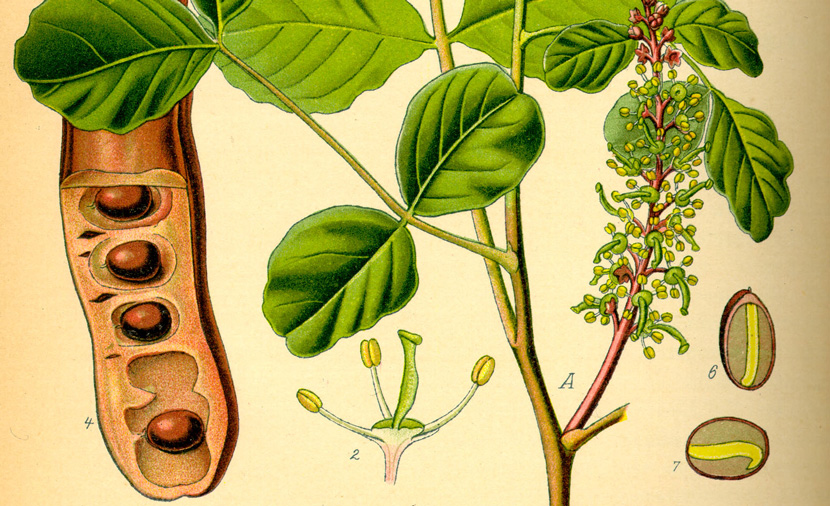 From an 1885 illustration of the carob plant by Prof. Dr. Otto Wilhelm Thomé. Wikipedia.

I write in praise of the dried carob, known for centuries to Ashkenazi Jews as bokser.

Surely there are many American Jews, at least of a certain age, who still vividly remember, as children in religious school, imitating their ancestors by ingesting this fruit in honor of Tu b’Shvat, the annual Jewish festival of trees that is celebrated today. And there is ample reason why they should remember: carobs are remarkably unpleasant to eat. As my Mosaic colleague Philologos once candidly put it, carobs “are flattish, irregularly curved, serrated along the edges, four to six inches in length, hard as nails to bite into, and yield—if you haven’t meanwhile broken all your teeth—a mealy substance that has been described as smelling like Limburger cheese.”

Perhaps, however, a closer look can reveal just how and why this much-maligned fruit is, in its own way, an ultimate embodiment of Jewish vitality and endurance.

In the Talmud, the holiday of Tu b’Shvat commemorates nothing more than one in a series of halakhic deadlines related to the obligation to offer tithed portions of the year’s crops to the Levites in the Temple. For fruits in particular, the end of one fiscal year and the beginning of the next was marked by Tu b’Shvat, the fifteenth day of the Hebrew month of Shvat. Because these laws of tithing applied only to produce grown in the Holy Land, celebrating Tu b’Shvat became throughout the centuries a way of connecting to the land itself. For Ashkenazi Jews, that meant eating one fruit: carob, whose name derives from the Hebrew haruv and whose Yiddish name, bokser, is short for the German bokshornbaum, the tree with ram’s-horn-shaped fruit.

There’s no question that bokser had long been native to the land of Israel. Carob seeds many thousands of years old have been discovered in archaeological sites all over the land. Yet while the Bible celebrates the “seven species” of wheat, barley, grapes, figs, pomegranates, olives, and dates, nary a mention of haruv occurs in Scripture. And no wonder. Confirming our own culinary intuitions, the Talmud refers to carob several times as unfit for human consumption (maakhal beheimah).

So why did Ashkenazi Jews eat bokser, of all fruits, on Tu b’Shvat? The late Gil Marks explains: “In the days before quick transport and refrigeration, the carob’s hard, dry texture made it one of the few fruits grown in the land of Israel capable of withstanding long-distance shipping without spoilage.” Evidently, for the Jews of Eastern Europe and their far-flung coreligionists and descendants elsewhere, so great was the desire for a “taste” of the land that even bokser could be tolerated. And indeed more than tolerated. Rabbi Berel Wein, who (like me) grew up and celebrated Tu b’Shvat in the arctic tundra of Chicago, recalls:

The bokser was hard as a rock and tasteless as wood. Yet I noticed that my parents, Jews of an earlier generation who were born before there was a state of Israel or a time when free and open worship was really allowed at the Western wall without Arab or government interference, ate their pieces of bokser slowly and with great affection. Only later in my life did I realize that eating that piece of bokser validated their hope and belief that the land of Israel would yet flourish and grow under Jewish sovereignty, and that the vineyards and orchards of the land promised to us by our prophets would become abundant reality.

It’s with this in mind that we can begin to recover the deeper dimension of bokser. In its discussion of “laws dependent on the land,” the Mishnah presents us with the following conundrum. Suppose a tree is planted on one of the land’s borders, with its roots in sacred soil but its fruit hanging over into non-native territory—into, in effect, the Diaspora. Is the fruit subject to tithing in accordance with the laws relating to Tu b’Shvat? The answer is unequivocally yes: everything depends on the roots, not the foliage.

Another talmudic ruling is also relevant here. The tractate of Bava Batra includes a lengthy discussion of the obligations we owe our neighbors. According to one ruling, we may not plant a tree near our neighbor’s well because the roots, though on our own property, will extend underground and possibly contaminate his water supply. Any tree, therefore, must be planted at a distance of 25 cubits from neighboring property. But certain trees, with exceptionally long roots, must be placed twice as far away. One such tree, the Talmud stresses, is the haruv, the carob.

So, according to Jewish law, identity is defined by roots: surely, an arresting idea. After all, we moderns often assume the opposite—that identity is not predetermined but malleable, that it can be shed and replaced like a suit of clothes, that we can be whoever we wish to be. And to a certain extent that is true enough; taken to an extreme, however, such an attitude, Judaism insists, denies human nature. “For man is akin to a tree in the field,” Deuteronomy informs us. In the view of Rabbi Joseph Soloveitchik, this strange comparison suggests precisely that man, much like a tree, is in fact integrally connected with his roots, and indeed largely defined by them.

The carob, says the Talmud, has longer roots than most other Israelite trees; to eat its fruit was thus, for Jews in the Diaspora, to link themselves with a land and a heritage far away, and with an identity impervious to the often inimical forces of their surrounding environment. Unquestionably, sweeter and more exotic species of fruit exist abundantly in the Holy Land today, and can be almost instantly transported anywhere in the world. But even today, to connect with one’s long-ago ancestors in the land by savoring the humble carob is truly to comprehend the Psalmist’s confident exclamation: “Taste and see that the Lord is good.”

Why Jews Used to Eat Dried Carob on Tu b'Shvat