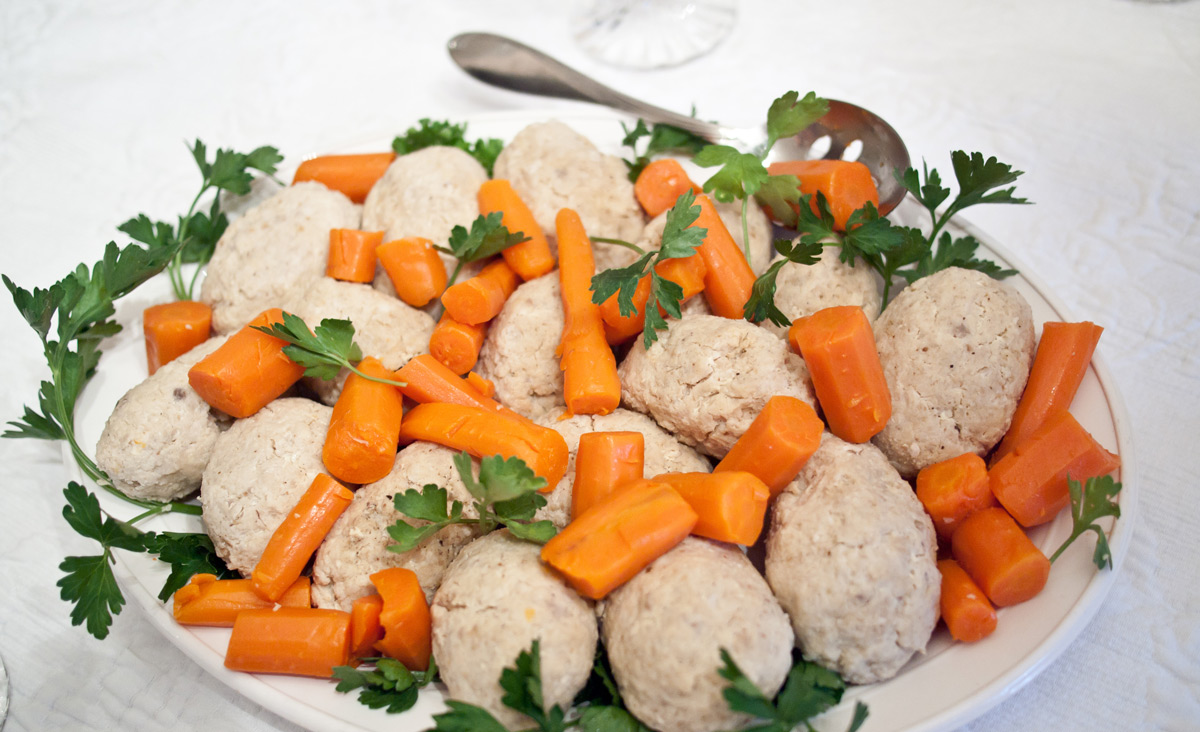 From Ken Ehrenburg comes this query:

A fellow shul-mate and I are engaged in a small dispute that I hope you might settle or illuminate. He has maintained for a long time that calling the repast that precedes the end of the Sabbath shalosh se’udot in Hebrew is grammatically incorrect, since this means “three meals” rather than “the third meal” [the first two being Friday-night dinner and Saturday lunch], which would be ha-se’udah ha-shlishit. I, on the other hand, have argued that this usage could be a form of synecdoche, whereby a part is referred to by means of the whole. What do you think?

The oddity of calling the Sabbath’s third meal “three meals” has struck me, too. Until now, I must say, I thought Ken Ehrenburg’s fellow synagogue-goer must be right. In Eastern Europe, the Sabbath’s third meal was called sholesh suddes, as it continues to be by many Orthodox Jews today; this is the Yiddish pronunciation of Hebrew shalosh se’udot, and I had always assumed it to be a Yiddish garbling of Hebrew grammar that was subsequently introduced into Hebrew itself. Such an assumption made historical sense, because the se’udah shlishit was accorded special importance in Jewish ritual by the Eastern-European movement of Ḥasidism, which observes it in the synagogue with singing and chanting in a highly charged religious atmosphere, and ḥasidic authors were notorious for their mangling of the rules of Hebrew.

Still, I was never quite satisfied by this. Even Ḥasidism mangled Hebrew only so far, and sholesh suddes, which substitutes the Hebrew cardinal number shalosh for the ordinal number shlishit, and puts it before the noun it modifies rather than after the noun where it belongs, would seem to go well beyond that. Could there be another explanation? Ken Ehrenburg suggests what this might be.

The tradition of a third Sabbath meal goes at least as far back as the early centuries of the Common Era, there already being mention of it in the Talmud. In talmudic times, it was the practice, with the exception of Sabbaths, to eat only twice a day, once in mid-morning and once in the evening. Yet even in our own age, when three meals a day are the norm, Orthodox Jews skip breakfast before the Shabbat-morning prayer, with the result that they, too, would eat only two Sabbath meals were it not for the se’udah shlishit. The talmudic tractate of Shabbat gives as the tradition’s source a verse in Exodus (16:25) about the manna: “And Moses said, ‘Eat it today, for it is the Sabbath today, today you will not find it in the field.” Three “today’s,” the rabbis reasoned, equal three portions of the manna provided by God in the desert, which was not gathered on the Sabbath.

Although this exegesis probably served to rationalize an already existing custom of celebrating the Sabbath by eating an extra meal, it lent the meal rabbinic authority. Still, only in 16th-century Palestine, with the advent of Lurianic Kabbalah, did the Sabbath’s third meal come to be considered the time of special divine grace that it was later thought to be by Ḥasidism as well. And it was only in Eastern Europe that the se’udah shlishit became the shalosh se’udot or sholesh siddes.

I asked an acquaintance steeped in Jewish sources if he knew the reason. His answer was that he believed there was a discussion of the matter in Divrey Emet or “Truthful Points,”a collection of homilies by the ḥasidic master Yakov Yitzḥak Horovitz (1745-1815), also known as “the Seer of Lublin,” but he couldn’t remember where in the book I would find it. Fortunately, Divrey Emet is a short volume, and three-quarters of the way through it I came across the passage in question. In commenting on the verse in the book of Numbers (24:19), “And out of Jacob shall come he that shall have dominion,” Horovitz writes:

The rabbis of blessed memory have said that whoever eats three meals on the Sabbath is saved from three calamities: the pangs of the [coming of the] messiah, the wars of Gog and Magog, and the retribution of hell. And I have heard it said that the reason the third Sabbath meal [se’udah shlishit] is called “three meals” [shalosh se’udot] is that partaking of it is [like] partaking of all three. For, in the first two, the eater is hungry and enjoys his food while observing the commandment “And thou shalt call the Sabbath a delight” [Isaiah 58: 14]. But this [third] meal is entirely for the sake of heaven, since, having no appetite, he [who eats it] acquits himself of all [three]….This is why it is called “three meals,”’ because a commandment is named for what completes it.

In other words: eaten a few hours after a large lunch, at a time when one does not really feel hungry, the third meal alone truly fulfills the commandment to eat three Sabbath meals, the other two of which would be eaten anyway. This explanation, which testifies to the Yiddish usage of sholesh suddes being common in Eastern Europe already over 200 years ago, is precisely the one offered by Ken Ehrenburg: the third meal is called shalosh se’udot because it stands for all three. The term is indeed a synecdoche.

Whether the Horovitz-Ehrenburg thesis is historically correct, I can’t say. All in all, though, it seems to me more likely than the mangled-Hebrew theory. And in case you’re wondering what all of this has to do with the biblical Jacob, kabbalistic tradition associates each of the Sabbath meals with a different patriarch: the Friday-night dinner with Abraham, the Saturday lunch with Isaac, and the se’udah shlishit with Jacob. Forcing oneself to eat once a week when not hungry is a small price to pay for being spared the apocalypse of Armageddon and the fires of Gehenna.