Have I Shared Too Many Secrets of Jewish Law?

My book opened the closed door of halakhic decision-making. Some think that process isn’t for public consumption. 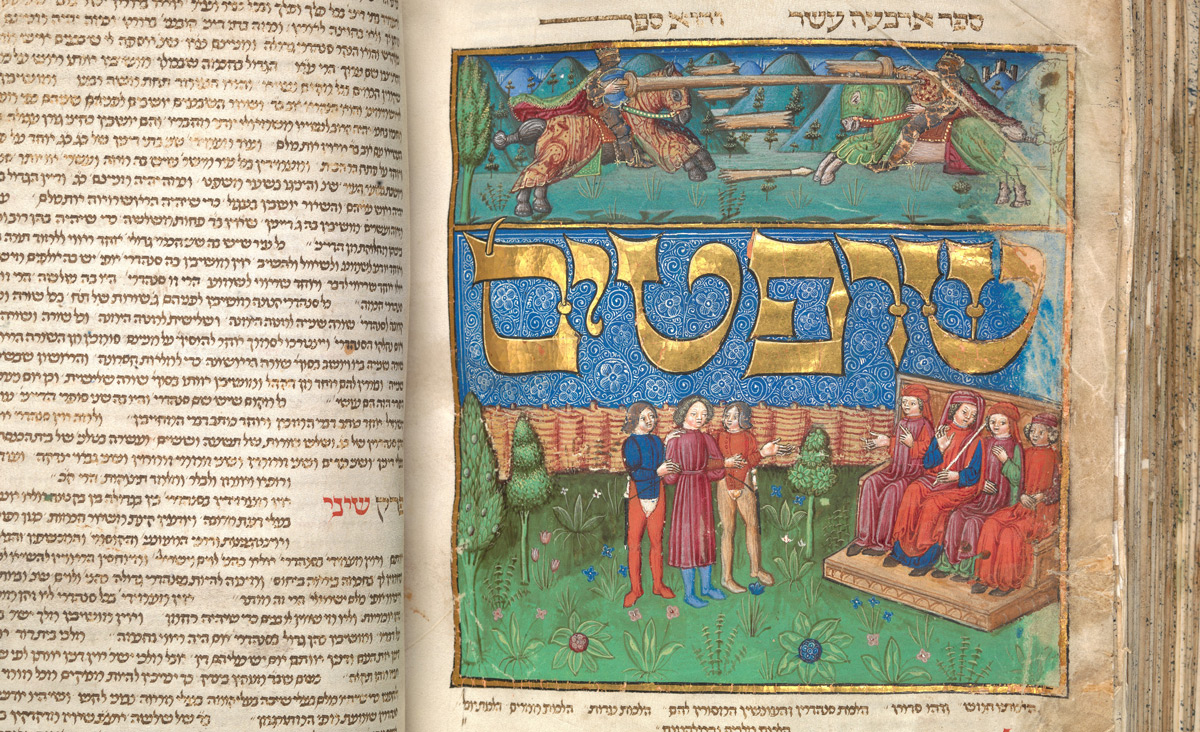 From Mishneh Torah Master of the Barbo Missal, c.1457. The Israel Museum, for Michael and Judy Steinhardt, by Ardon Bar-Hama.


Shlomo M. Brody, an Orthodox rabbi and a columnist for the Jerusalem Post, directs the Tikvah Overseas Seminars and serves as a presidential graduate fellow at Bar Ilan University Law School.

It’s been five months since my first book was released, and my publisher and I have every reason to be gratified, if not overjoyed, by its reception. A revised collection of columns that first appeared in the Jerusalem Post, the book, A Guide to the Complex: Contemporary Halakhic Debates, is in its second printing and, somewhat astonishingly for a work on so relatively specialized a topic, has even won a National Jewish Book Award.

But others, including some good friends, are decidedly less than happy. In presenting for a general audience the internal discussions of Jewish religious authorities on a host of controversial topics, including abortion and stem-cell research, cruelty to animals, civil marriage in Israel, and female rabbis, I have clearly ruffled some feathers. As I expected, some traditionalist readers have taken umbrage at my inclusion of lesser-known legal figures and opinions. Yet even a few generally open-minded thinkers have apprised me that it is improper for a work of popular literature to highlight the textual nuances and political overtones of debates within Jewish law. This is especially the case when an author (me) subtly offers his own opinion, thus leaving a reader without clear and authoritative guidance when it comes to actual religious practice. And what if a reader happens not to be committed to Jewish law in the first place?

In brief, according to my critics, the decision-making process of Jewish legal thought is not for public consumption, and much mischief can be wrought by exposing it to minds unequipped to grasp or appreciate its complexities. Note: the emphasis here is on the word “process.” Everyone agrees that Jewish legal norms, like all legal norms, must be clear and accessible. The law must be well known so that people can avoid transgression and properly fulfill the divine will. That was the aim behind the great legal codes of Moses Maimonides in the 12th century and of Joseph Karo in the 16th century, and so it should remain today. Yet while the bottom-line norm must be publicized for the good of all, the route by which the norm is arrived at need not be—and, some hold, should not be.

While famed for their robust and dynamic nature, Jewish legal debates were historically limited to a highly select group capable of mastering the intricacies and obscurities of legal language and concepts. Indeed, the talmudic rabbis not only declined to reveal these nuances to the masses but saw benefits to their concealment. One such benefit lay in the prevention of possible confusion and error (Shabbat 12b). In some circumstances, for instance, a stringent ruling might be issued to ordinary Jews while the scholarly elite, whose piety and punctiliousness could be relied upon, were vouchsafed a more permissive version (Ḥulin 15a). Another benefit lay in forestalling challenges to rabbinic logic: “When an ordinance is taught in the [land of Israel], its reasoning is not disclosed for twelve months lest there be some who might not agree with it and slight the ordinance itself” (Avodah Zarah 35a). Even when the talmudic rabbis did reveal a formal rationale for a decree, they might simultaneously disguise the social motivations or policy considerations behind it. Thus, when price gouging drove up the cost of turtledoves destined for sacrifice in the Temple, Rabbi Simeon ben Gamliel, knowingly misrepresenting the law, ruled in such a way as to force sellers to lower their prices (Keritot 8a).

Such recourse to esotericism continued to play an important role in later Jewish history, despite objections that it might ultimately betray the law’s commitment to honesty and distort orally transmitted understandings. Nor was the practice limited to Jewish legists. Historians have pointed to parallel trends within Greek and Roman law and later enactments in the Middle Ages and beyond.

Perhaps more surprising is the continued role of deliberate obscurity in modern legal discourse. Meir Dan-Cohen, a professor of law at the University of California in Berkeley, has documented the “selective transmission” of normative rules in British and American criminal law and the resultant discrepancy between the law as taught to citizens and the law as administered by judges. While acknowledging the tension this creates with the ideal of the rule of law, Dan-Cohen defends its use in advancing important social values and policies. Guido Calabresi, formerly of Yale Law School and now a federal judge, has similarly noted that judges employ subtle “subterfuges” to bring legislative statutes in line with societal goals. And this is not to mention the many national-security directives that by their nature are hidden from the public.

All this, of course, cuts very much against the contemporary demand for candor, honesty, and transparency in everything pertaining to public life. By and large, however tolerant we might be of limited forms of “selective transmission,” we expect our leaders to be forthright about their decisions and the rationales for them, to disclose (or at least not to conceal) their social and political agenda and acknowledge the options they have chosen not to endorse.

The same ethos is shared by many traditionally observant Jews today who follow Jewish law or at the very least regard it as a deep source of guidance in their lives. To do so fully means to adopt the rulings of expert rabbinic authorities on a range of issues that touch upon personal, communal, and national welfare. Yet these observant Jews, generally better educated than their grandparents, also have access to original texts, modern translations, and Internet resources, and are acquainted with the claim that rabbinic texts are themselves reflective of particular historical circumstances and/or ideological presuppositions, and should be interpreted in that light. In exchange for their trust and religious commitment, such Jews expect greater transparency regarding today’s halakhic process.

And this brings me back to my book, which aims to satisfy that expectation. In it, on any given topic, I present the complete range of established opinions while also noting the significant ideological and historical factors behind them. Let me illustrate with three sorts of issues, each of which, during the writing of the book, confronted me with both a challenge and an opportunity.

First, there is a class of issues, ranging from the kosher status of gelatin, to whether one can remove respirators from the terminally ill, to the use of a microphone in synagogue services on Shabbat, on which many authorities have taken a largely stringent, prohibitive position. While certainly defensible, these rulings have also had their detractors, not only among those representing more liberal tendencies inside (or outside) Jewish circles but even from within mainstream Orthodoxy itself—to the point where many Jews will respond in disbelief when someone claims there is no legitimate dissenting view. Today, many observant Jews expect these minority opinions to be taken into account and wrestled with, forcing advocates of the majority position either to defend it or to adopt a different position in light of new contexts and arguments.

Second, in addition to demanding that scholars deal with counterarguments, today’s expectation of candor forces them to declare the policy considerations and value judgments that inevitably, and legitimately, have played a role in their thinking. This is especially the case when it comes to such hot-button issues as standards for conversion to Judaism, the role of women in Jewish public and ritual life, and, in Israel, the relationship between religion and state. When formulated properly, an acknowledgment of these factors enables an observant Jew to understand the context—the ethos and worldview—that, beyond legal logic or the needs of policy making, has helped to shape an author’s mindset. By affording a glimpse into halakhah as a system encompassing both specific programs and particular values, such openness can also impart greater appreciation of the animating principles of Jewish law.

Finally, and perhaps most controversially, the demand for candor encounters the disquieting fact that, along with the many morally uplifting views and sentiments to be found in Jewish law, there are opinions that can and do raise ethical qualms. These include, among other issues, the use of chickens in kapparot penances before Yom Kippur, some less-than-wholly altruistic rationales for the requirement to perform life-saving measures for non-Jews on the Sabbath, restrictions on the reporting of Jewish criminal behavior to government authorities, and halakhic endorsement of corporal punishment for children.

Some writers tend to downplay the existence of stringent or seemingly unenlightened opinions on these issues with the hope of promoting a more humanistic or gentler vision of halakhah. Yet in an age of unlimited access to information, this tactic ultimately backfires; controversial elements of the tradition are open for all to see. Moreover, directly confronting difficult or discomfiting halakhic opinions, whether tending to the conservative or the liberal side, can have a positive effect, elucidating the degree to which the legal vision informing them remains grounded (or not) in classical sources and advances (or retards) the divinely mandated mission of Jews to promote the right and the good.

In sum: legal esotericism, when executed properly, can indeed conduce to certain social benefits. But so can transparency—which, in addition to being demanded in the modern situation, brings with it many beneficial opportunities to preserve and advance the relevancy and vitality of Jewish norms in the 21st century. It was in hopes of serving that purpose that I set out to write A Guide to the Complex, and I’d like to think that the resonance it has achieved will work to that end.

Have I Shared Too Many Secrets of Jewish Law?