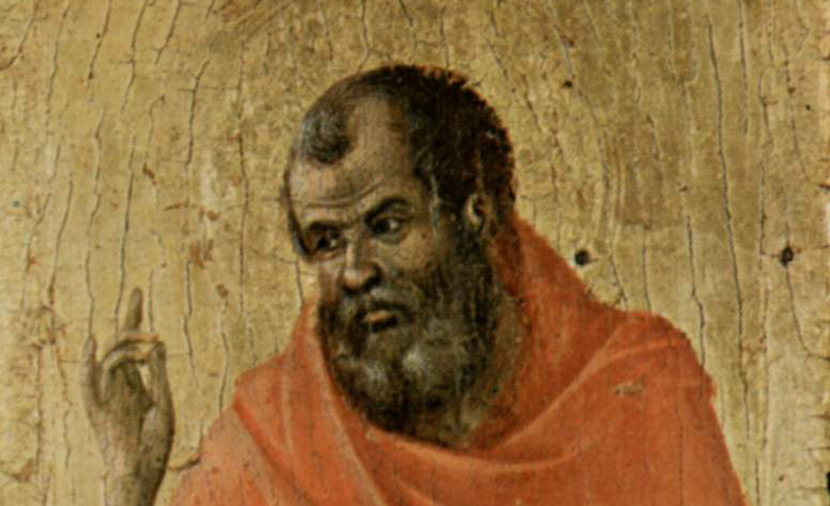 From The Prophet Hosea by Duccio di Buoninsegna, 1311. Wikipedia.

The haftarah accompanying this week’s reading of Bemidbar is taken from the prophet Hosea (2:1-22). That book is unusual in that rabbinic opinion is split down the middle on whether the events described in it—starting with God’s ordering the prophet to marry a whore and father children by her—happened in real life or are entirely symbolic depictions of the Lord’s relations with the people Israel. In the tractate Pesaḥim, the hardened realists of the Talmud imagine the encounter between the Almighty and Hosea went like this:

The Master of the Universe said: what shall I do to this old man? I’ll tell him “Go take to wife a whore and bear whoresons by her,” and after that I’ll tell him, “send her away from before you!” If he’s capable of sending her away, then I too shall send away Israel. . . . [Hosea] said: “Master of the Universe, I’ve children by her and cannot put her out or drive her away.” The Holy One said, “And what are you whose wife is a whore and whose children are whoresons, and you do not know if they’re yours or others’? Just so are Israel, who are my children, children of those I’ve tested . . . and you tell me to transfer them to another nation?!” Since [Hosea] knew he’d sinned, he rose to plead mercy for himself. The Holy One told him: “Since you’re pleading mercy for yourself, plead mercy for Israel, against whom I’ve decreed three decrees for your sake.” He rose to plead mercy for them, cancelled the decree, and started blessing them.

As far back as the Aramaic translation of Hosea (ca. 2nd century CE), however, there were doubts the book meant what it said. In the Middle Ages, Abraham ibn Ezra thought it was all a dream, and even Maimonides presumed the same. Not so Isaac Abrabanel (1437–1508), whose impatience with this approach scorches the page:

It’s truly lewdness and criminal to deny the simple meaning of the writings, . . . and these commentators have no argument when they say the Holy One was mocking the dignity of the prophet in commanding him to take a whore wife and bear whoresons. For plainly the prophets were not chosen by the Lord for their own sake . . . but were messengers of the deity to straighten out His people, and therefore He commanded them to do whatever was necessary to correct the people.

You can take it as you please, then, but you have to ask yourself one question: if Hosea was only dreaming that he’d married that woman and fathered those children, why shouldn’t he be able to drive her out in the same dream? But the relationship of the Lord with the children of Israel is not a dream; He really was stuck with those children who were worshipping idols. If the prophet was to be an instrument for voicing His pain, as Abrabanel has it, why balk at inflicting the same pain on him?

Tell your brother Ami and your sister Ruhama,
Fight, fight against your mother
For she is not My wife and I am not her husband
And she should remove her harlotry from her face
And wantonness from between her breasts
Or I’ll strip her naked and show her like the day she was born
And make her like a desert, make her like a barren land and let her die of thirst.
And for her children I’ll have no mercy for they’re the children of whoring.
For their mother strayed, she that bore them shamed them

In this haftarah, which consists of most of the second chapter of Hosea, you don’t actually get the scene of the Lord instructing Hosea to take this wife, or read about the birth and naming of the children. In Hosea 2, which is read once a year in the synagogue, the wife and the nation of Israel are virtually indistinguishable, and the Lord’s threat to strip the nation like a divorced adulterous wife is clearly symbolic. So again you might ask: is the prophet, Hosea, hallucinating, or is his pain real? No matter your answer, what definitely feels real is the Lord’s pain as he moves now into a very detailed ceremony of divorce, including the redistribution of marital assets, only to follow with a very moving remarriage ceremony that recaptures the love of youth and a reaffirmation of the wedding vows:

For she said I’ll follow my suitors
Who give me my bread and water, my wool and linen, my oil and liquor.
Therefore I’ll bar her way with briars
And fence her in and her byways she won’t find.
And she’ll chase after her suitors and not catch them
And seek them but not find.
So she’ll say: I’ll go and return to my first man
For I had it better then than I do now.
But she didn’t know it was I who gave her
Grain and grape and oil
And the silver I multiplied for her
And the gold she made into a husband.

The crux of this prophecy and its metaphors can be discerned in that last word, “husband.” The Hebrew, baal, can be read as the name of the idol that many Israelites were worshipping but also as husband or owner. Who is it these people belong to, anyway? And to whom does the wife look to for support and sustenance and love?

Therefore I’ll once more take my grain in its season
And my grape when it’s due
And I’ll salvage my wool and linen
That would cover her from being nude.
But now I’ll reveal her wickedness to her suitors’ eyes
And no man shall deliver her from my hand.
And I’ll still all of her holidays,
Festivals of new month and Sabbath, and all her sacred times
And I will desolate her vine and fig
That she said, They’re my reward that my suitors gave me.
I’ll make them over into a wood to be eaten by wild beasts
And I’ll remember her for the festivals of idols
When she burned incense
And put on her nose ring and bangle
And went after her suitors
And Me she entirely forgot, so says the Lord.

The strongest argument against a metaphorical reading of this book as merely a dream is the picture that will now be given of the Lord as He pursues his wayward wife into the desert. I don’t think most people, even prophets, pursue ideas into the desert. Even Moses had to be driven out of Egypt as a criminal and then find employment as a shepherd before he wound up in the wilderness for the Lord to find him. People just don’t hang out there for fun.

Therefore I’ll coax her
And lead her through the desert
And speak to her heart and give her her vineyards there
And the valley of Akhor as an opening to hope
And she’ll respond to Me there as in her days of youth
And like the day she came up out of the land of Egypt
And it’ll be on that day, says the Lord,
You’ll call Me your Man and no longer call Me husband
And I’ll remove the names of the idols from your mouth
And they’ll not be remembered by name on any account
And I’ll cut them a covenant upon that day
With the wild beast and birds of the sky and crawlers of the earth
And I’ll break the arrow and sword and war from the land
And I will lay them down secure
And betroth you to Me for all time
And betroth you to Me in justice and judgment
And in kindness and mercy
And I’ll betroth you to Me in faith
And you shall know the Lord.

How can you love an idea? The Lord told Hosea to take a wife who would be as troublesome to him and whose children would break his heart as much as the children of Israel have broken God’s heart. But the Lord is married to Israel, and what’s more He wants to remain married. So He tries again and wants Hosea to try again, and the children of Israel do “know the Lord”—because this is a marriage. They try again, they fail again, but eventually they listen in the desert. When He calls them, they hear the voice of true love—not an idea, and not a dream—and they come back.