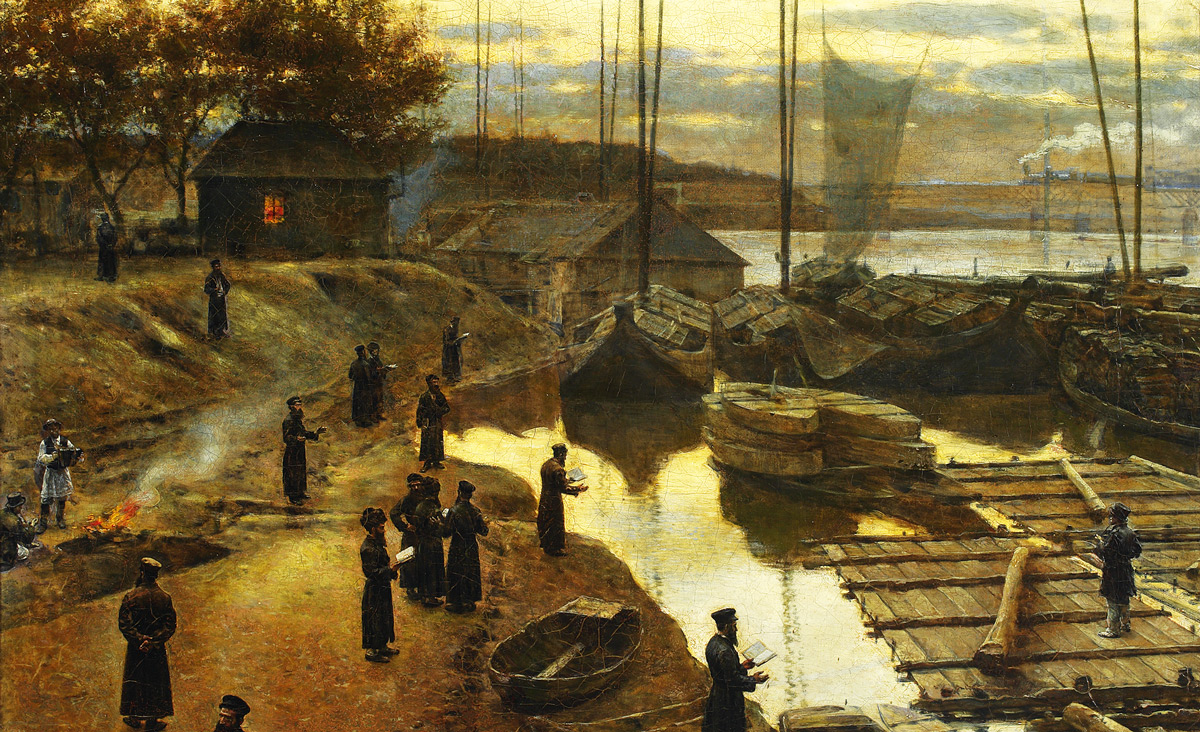 From Feast of trumpets I, 1884, by the Polish painter Alexander Gierymski. Wikimedia.

Just before the start of the musaf (“additional”) service in Ashkenazi synagogues on Rosh Hashanah and Yom Kippur, the prayer leader chants a personal entreaty begging God to be merciful to His people, gathered at this season in repentance of their sins. The prayer is known by its opening words hineni he’ani mimaas, “Here am I, poor in deeds. . . .”  In all of halakhic literature there seems to be only one reference to it, by Rabbi Ephraim Zalman Margolis of Galicia (1762–1828), who wrote:

It is our custom that before the kaddish [marking the transition to musaf], the prayer leader recites in a whisper the prayer composed and written in holiday prayer books [and beginning] hineni he’ani mimaas. Some have the custom of saying other prayers as he asks and pleads that his words be accepted. . . . He should take care to recite it with tremendous concentration, from the depths of his heart and with abundant tears. Some hereabouts have been accustomed to raise their voices occasionally in the midst of this prayer to stir the hearts of the people sitting in stillness until he finishes his prayer. In any event he should not take too long over it lest he inconvenience the public with too lengthy an interval between the [preceding parts of the service and musaf] . . . After whispering the [concluding] verses . . . he should begin singing the kaddish in its particular melody.

The novelist S.Y. Agnon also mentions this prayer in his collection of High Holy Day customs, Days of Awe:

Approaching the ark [of the Torah], [the leader] does not start [musaf] immediately but pauses a little and bestirs himself to concentrate and then voices the prayer leader’s plea in fear and trembling before saying the kaddish and praying musaf with his body stooped. . . .

I am indebted to an article by Michael Rigler that traces this prayer’s inclusion in various collections of liturgical poetry as far back as a 1560 edition compiled by Rabbi Naftali Hertz or his sons in Thiengen, Germany. But there the trail goes cold. Nobody knows who wrote the prayer or why, and aside from these two transcriptions of the manner in which it was recited we have no definitive way of situating it in place and time or any other clue as to how it came to be lodged in the liturgy at so crucial juncture in the service.

For this much is clear: if you were searching for the ideal point at which to exert the greatest pressure on a congregation to bend their hearts toward repentance and focus their minds in concentrated prayer, you could not possibly pick a better time. In sports terms, this is the equivalent of the final innings of the final test match—except that there’s been no warm-up, no time to get your bench in order before all of a sudden you’re playing for keeps. With only few prior bursts from the ram’s horn to scare you into paying attention, repentance time is upon you, and you’re not ready.

So it falls on the prayer leader to guide you through, taking you by the hand like a star actor playing the lead role of Hamlet or Macbeth, except that the actor playing Hamlet has a whole team of supporting players, clowns, and sword-fighters to vary the pace and keep the audience spellbound; the prayer leader on Rosh Hashanah is all alone as he escorts you on the prolonged emotional journey that will end ten days later, at the close of Yom Kippur, in cleansing and release. What he says now about this tremendous burden reveals as much about his office as about the community that office serves.

Here am I that am poor in deed,
rattled and afraid
in awe of Him who sits in wait for the praises of Israel,
standing to plead before Him
for His people Israel
who have sent me,
though I am not fit or worthy for the task.
Therefore I ask you
God of Abraham, God of Isaac, and God of Jacob
Lord God, merciful God and forgiving God of Israel
Shaddai, awesome and terrible,
be You the expediter of my errand
as I come to stand and plead for mercy
for me and those who sent me.

Having declared himself unfit for the great challenge, having begged divine intercession to make up for his deficiencies, having invoked the Lord’s honorific epithets and attributes of love and mercy and called in favors from the patriarchs, the prayer leader now falls into a whisper—at least according to Ephraim Zalman Margolis. These days, the entire prayer is usually recited aloud, although the lines about to follow are sometimes printed in brackets indicating a hushed tone. Why? Perhaps because, in getting to the crux of the matter, they are too brutally honest:

This is the heart of the prayer, and of the entire communal exercise of repentance. No one is really pure enough to lead this service. (And even if there were such an individual, have you taken a look at the congregation as a whole lately?) So the lines are said quietly because the situation itself is shameful, and deeply troubling. Prayer leader and congregants alike have entered together into an intimate and dangerous relationship in which each individual hopes he’ll be held accountable only for his own crimes and not condemned for anyone else’s. Several times during the service on these days of the year, the entire congregation stands together and recites a huge catalogue of sins—in the grave suspicion that somebody present has committed at least one of them and the grave hope that, for the sake of the virtues of others, all may be forgiven. This prayer is an acknowledgement by the person selected to lead that not only is he fundamentally not up to the task but even if he were, there’s only so far his own merits will take him.

And receive my prayer
as the prayer of an old and experienced man,
with a fair record and a full beard,
a pleasant voice,
and involvement in the minds of the people.

These verses always strike me as mixing candor and humility with a shrewd bet on the truth of a maxim in the Ethics of the Fathers (3:12): if you want to know heaven’s opinion of a man, the opinion of people is the opinion of heaven.

And chide the devil lest he try me
and let our banner over You be Love,
and obscure our sins with love.
Turn our fast-days and misfortunes
to merriment and joy,
to life and peace,
for us and all Israel,
for truth and peace we have loved.
And let there be no stumbling block before my prayer.
May it be Your will—
Lord God of Abraham, God of Isaac, and God of Jacob,
great and mighty and awesome God,
God above, “I will be what I will be”—
that all the angels who assist in prayer
may bring my prayer before Your throne of glory
and spread it out before You
for the sake of all the righteous
and the gracious and innocent and honest
and for the honor of Your great and terrible name.
For You hear the prayer of Your people Israel with mercy.
Blessed are You, who hears prayer.

In this final, swelling paragraph the prayer leader appeals to the Lord in the Lord’s own language—“I will be what I will be”—when He introduced Himself to Moses at the burning bush. The leader’s plea is that he will be made capable of what he isn’t capable of, that he will be as pure and as undistractable as Moses, that the prayers he will now offer on behalf of all those gathered around him will cause forgiveness to rain upon the deserving and undeserving alike, because he has tried.