The history of holiday greetings. 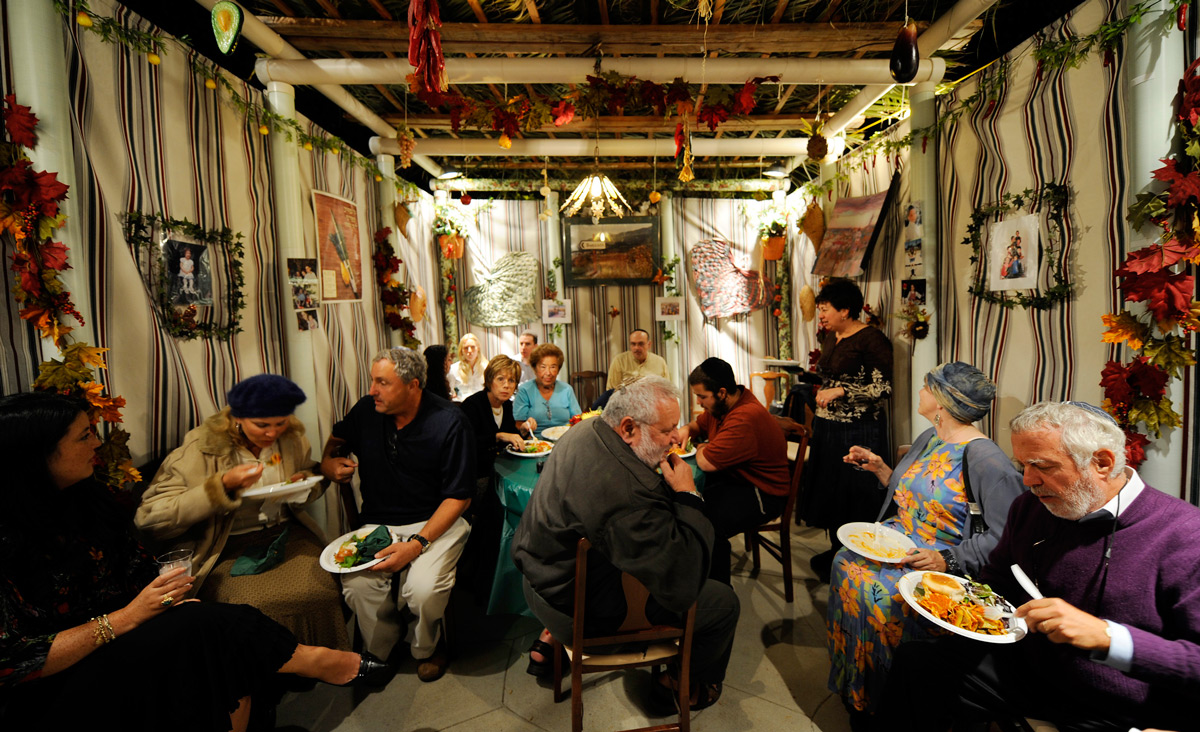 The eight days of Sukkot (seven in Israel) are, like those of Passover, of two kinds. The first, second, seventh, and eighth days of the holiday (the first and seventh in Israel) resemble the Sabbath in their festive meals with kiddush, the blessing over wine; their additional prayer service of Musaf; and their restrictions on work, travel, commerce, and other things. In Hebrew, they are known as yamim tovim, literally, “good days,” the singular of which is yom tov. The intermediate four days (five in Israel) lack these elements and are called ḥol ha-mo’ed, “the non-sacred part [ḥol] of the festive [literally, “appointed”] time [ha-mo’ed].”

Which raises the question: when two traditionally minded Jews meet on a yom tov of Sukkot or Passover, and then again on ḥol ha-mo’ed, do they exchange the same holiday greeting on both occasions, or two different ones?

I first found myself wondering about this many years ago when, saying ḥag same’aḥ, “happy holiday,” to someone on one of the intermediate days of Sukkot, I received the reply: “Today is ḥol ha-mo’ed. You should be saying mo’adim l’simḥah, not ḥag same’aḥ.” Was this person right? True, mo’ed and ḥag are near synonyms in the Bible, and the greeting mo’adim l’simḥah, “[May] festive times [be] for happiness,” is not very different from ḥag same’aḥ, but in matters of custom and ritual, vive la petite différence.

Ḥag same’aḥ is a greeting used not only in Israel but also by many Jews in America and other countries, on all Jewish holidays: Sukkot, Passover, Shavuot, Hanukkah, Purim, even Israel’s Independence Day. The word ḥag, which is related to its Arabic cousin haj, the annual Muslim pilgrimage to Mecca, is found many times in the Bible. Sometimes it refers there to any celebration, as when Moses asks Pharaoh to grant the Israelites a respite from work so that they may observe a “ḥag of the Lord’s.” Sometimes it denotes the entirety of a yearly festival like Sukkot, about which we read, “And on the fifteenth day [of the month of Tishrei] . . . you shall celebrate a ḥag unto the Lord for seven days.” And sometimes it designates just the yamim tovim of such a festival, as in the commandment pertaining to Passover, “Seven days you shall eat unleavened bread, and on the seventh day is a ḥag unto the Lord.”

On the face of it, then, it is not wrong to invoke the second of these meanings by greeting someone with ḥag same’aḥ on ḥol ha-mo’ed. And yet until recent times, perhaps because of its possible ambiguity, Jews never initiated a greeting with the word ḥag on any day of a holiday. The standard salutation on holidays like Sukkot and Passover, on yamim tovim and ḥol ha-mo’ed alike, always started with mo’ed, as in mo’adim l’simḥah and variants of it like mo’adim l’shalom, mo’ed tov, and so on.

Traditionally, it was only in response to such formulas that the word ḥag occurred in the answering phrase ḥagim u’zmanim l’sason, “[May our] holidays and [sacred] times [be] for joy”—which, like mo’adim l’simḥah, comes from the holiday kiddush blessing over wine. Not only that, but this response was largely limited to European Jewry; in North Africa and the Middle East, the standard reply was tizku l’shanim rabot u-ne’imot, “May you enjoy many long and pleasant years,” or something similar. Moreover, in Yiddish-speaking Eastern Europe, there emerged the additional greeting of gut yontif, “[Have] a good yom tov.” Unlike mo’adim l’simḥah, which was used on ḥol ha-mo’ed as well, gut yontif was restricted to the yamim tovim. On the holiday’s intermediate days, Yiddish-speaking Jews continued to say mo’adim l’simḥah or resorted to its Yiddish alternative of a gutn moyed.

In fact, it was not until the 20th century that the now ubiquitous ḥag same’aḥ entered the Jewish lexicon. This first happened in British Mandate Palestine, where the revival of Hebrew as a spoken tongue involved massive borrowings from other languages, Yiddish especially. Casting about for a way of saying gut yontif in Hebrew (one couldn’t very well say yom tov tov, comically reduplicating the tov hidden in the –tif of yontif), native Yiddish speakers, invoking the third of ḥag‘s three biblical meanings, hit on ḥag same’aḥ, which quickly gained currency among Palestine’s Jews. Yet although the ḥag of this expression soon came to apply in ordinary speech to any holiday, there were those for whom, having originated as a gut yontif substitute, it felt natural only on the yamim tovim. On ḥol ha-mo’ed, they went on greeting each other with mo’adim l’simḥah.

This is the source of the belief held by some, like the acquaintance who corrected me long ago, that ḥag same’aḥ is inappropriate for ḥol ha-mo’ed. On consideration, I disagree. What is inappropriate for ḥol ha-mo’ed is Yiddish gut yontif—but Hebrew ḥag same’aḥ is an independent expression and should be treated as such. In post-biblical Hebrew, the ordinary meaning of ḥag is simply “holiday,” and no one would dispute that ḥol ha-mo’ed is part of the holiday, too. Although mo’adim l’simḥah is a perfectly legitimate ḥol ha-mo’ed greeting (indeed, while largely replaced today by ḥag same’aḥ, it also remains a legitimate greeting for the yamim tovim), only a pseudo-purist would insist on it. Ḥag same’aḥ should be just as acceptable, and I wish one to you all.