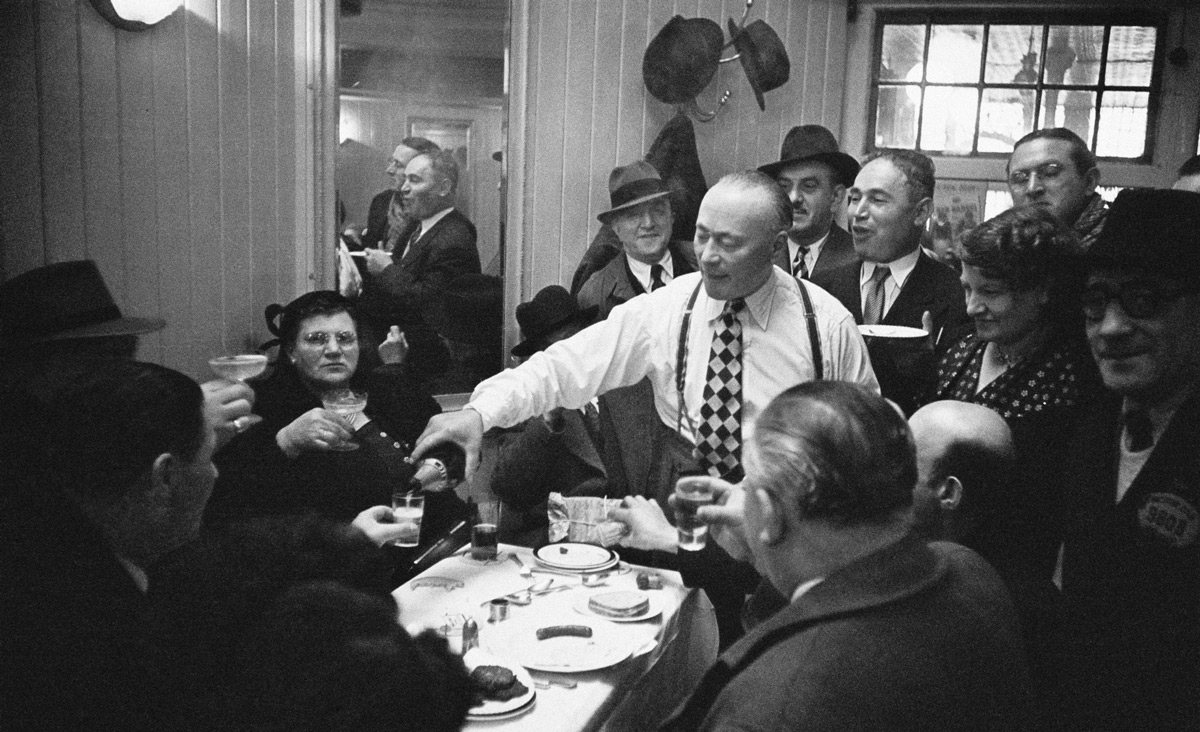 A Jewish man shares a bottle of champagne with friends in Whitechapel, then the center of the Jewish community in London, April 1952. Photo by John Chillingworth/Picture Post/Hulton Archive/Getty Images.

Henry Cohen sends me “a Yiddish-Hebrew toast chanted in rhymed couplets” and asks:

Can you tell me anything about the attached toast, which has been in a friend’s family for a long time? In my family, too, we have used original variations of it at simḥes [celebrations] for many years.

I have taken the liberty of changing some of Mr. Cohen’s idiosyncratically Latinized spellings, which would seem to reflect a West or Central European Yiddish dialect closer to German than is standard Yiddish. Here are the first two couplets:

Or, in an unrhymed translation:

These are the generations of Noah.
From whiskey you get strength.

Strength is what matters.
From whiskey you get drunk.

“These are the generations of Noah,” the opening verse of the second weekly Bible reading in the book of Genesis, which also happens to be the reading for this week, is an appropriate introduction to a toast, since Noah is described in the Bible as having been the world’s first winemaker and drunk. The second couplet’s beginning with the first couplet’s last word, the Hebrew-derived koaḥ, “strength,” forms part of a pattern that runs through the length of this Yiddish chant. In the remainder of the chant, however, there is a regular alternation of German-derived with Hebrew or Hebrew-derived words, pronounced in the Ashkenazi fashion, that have identical meanings. The next couplets are:

Frager iz a shoel,
Peh iz a moyl.
[A mouth (Hebrew) is a mouth (German-derived Yiddish)]

Moyl iz a peh
Dorn iz a sneh.
[A thorn (German-derived Yiddish) is a thornbush (Hebrew)]

The pattern, we now see, has expanded to include another rule: the first line of each couplet is an inversion of the second line of the previous couplet. Thus, Shoel iz a frager becomes Frager iz a shoel, Peh iz a moyl becomes Moyl iz a peh, and so on. This continues throughout the toast, which ends:

There exist other versions of this chant that do not end here; in fact, Eyle toldoys Noyakh—from now on giving the words their standard Yiddish transcription—was widely known throughout the Yiddish-speaking world. In some of its variations, the rules worked slightly differently. One that is more complete than Mr. Cohen’s concludes with the verses:

Eyle toldoys Noyakh, this version makes clear, was a toast used by not just Mr. Cohen’s friends and family. Yet was this what it originated as? Here, things are murkier, because such bilingual rhyming chants were also used pedagogically to teach Hebrew to young children in the ḥeder, the Eastern European Jewish schoolroom. In an article on the subject, the renowned Yiddish scholar Yudl Mark published several of these chants, one of them even trilingual: tanur, an oyven, to pechka; ner, a likhtl, to svechka, it begins, giving the Hebrew, Yiddish, and Russian words for “oven” and “candle.” Mark even singled out eyle toldoys Noyakh as a prime example of a “Hebrew mnemonic chant” used by ḥeder teachers. His fellow Yiddishist B.Y. Bialostotsky wrote about it:

In my shtetl of Pompian [Lithuanian Pumpenai], we would return home from ḥeder on dark nights declaiming Eyle toldoys Noyakḥ. . . . What I remember from those nights is not the Hebrew words, but the sensation of chanting in the dark, and the special flavor of tramping through the mud with our lanterns and hoping that by the time I reached the last verse, Vaser iz mayim, l’shonoh habo’oh biyerusholayim, I would have arrived at my grandparents’ brightly lit home.

This may also shed light on Eyle toldoys Noyakḥ’s origins. Note that, as remembered by Bialostotsky, the chant’s final couplet ended not with the rhyme of l’ḥayyim, but with that of l’shonoh habo’oh biyerusholayim, “Next year in Jerusalem”: the concluding refrain, known to every Jew, of the Passover Haggadah and the Ne’ilah service on Yom Kippur. Possibly, therefore, Eyle toldoys Noyakh started out as a ḥeder chant and was subsequently turned into a toast by adults jokingly recalling their ḥeder years.

And yet this may be an overly hasty conclusion, because what would Eyle toldoys Noyakh,/ Fun bronfn krigt men koyakh, which forms part of Bialostotsky’s childhood memory, too, have been doing in a ḥeder chant? The opposite, then, is also possible—namely, that Eyle toldoys Noyakh originated as an adult parody of a ḥeder chant and subsequently made its way back to the ḥeder, in the course of which it retained its first two couplets while having its final one replaced by one deemed more suitable for schoolchildren.

Perhaps further research could turn up the answer. Meanwhile, Mr. Cohen deserves our thanks for bringing this delightful ditty to our attention.

And still on the subject of children’s chants, you may recall that in a column a while back I touched on the rhyme, recited by children in Israel when making up after a quarrel, sholem, sholem l’olam/ b’rogez b’rogez af pa’am, “peace, peace always/ angry, angry never.” I mentioned that this is commonly accompanied by the reconciled friends joining their little fingers together, and I wondered where it all came from. That led to a letter from Sylvia Herskowitz:

I am eighty-seven years old and grew up in a Yiddish-speaking home. When I had a fight with a friend, we were taught to intertwine our pinkies and sing: riggile riggile roygez, bistu mit mir b’roygez [“you’re mad at me”], riggile riggile rik. . . . I forget the last line, but I think it may have ended with tsurik, “again.”

It probably did end that way, and probably went something like mir zaynen fraynt tsurik, “Now we’re friends again.” This would indeed appear to be the origins of the Hebrew sholem, sholem l’olam.